I'm old enough to have been able to walk those streets with my parents and remember what the area was actually like. Prior to the construction of One Monument Square in 1970, Portland was a decaying port city with the mass exodus to the suburbs well underway. New downtown construction was basically non existent for decades with the exception of Franklin Towers (1969), Maine National Bank (1955) and the WCSH TV building (1967). Interstate 295 was still in the planning stages, there was the smell of sewage dependent on the wind direction from Back Cove, no arena, no Holiday Inn, no Canal Plaza, no Portland Square, no One City Center, Monument Square was a rotary, the Old Port was mostly abandoned and railroad tracks ran down the center of Commercial Street and it smelled like dead fish.

Most of those structures in the center upper right of the photo were derelict and beyond financially sensible repair. The only respectable shopping district was an aging Congress Street with Porteous, Benoits, Sears (Free St) and a few other established retailers who hung on as long as possible until they eventually escaped to the Maine Mall. As markhb mentioned, the Maineway project (1975) was a huge catalyst in improving the appearance of Congress Street and Monument Square with brick and granite sidewalks and plazas. Some mistakes were made along the way but overall Portland has evolved into an impressive urban center for a city of only 70,000 residents.
Last edited: Sep 14, 2021
P 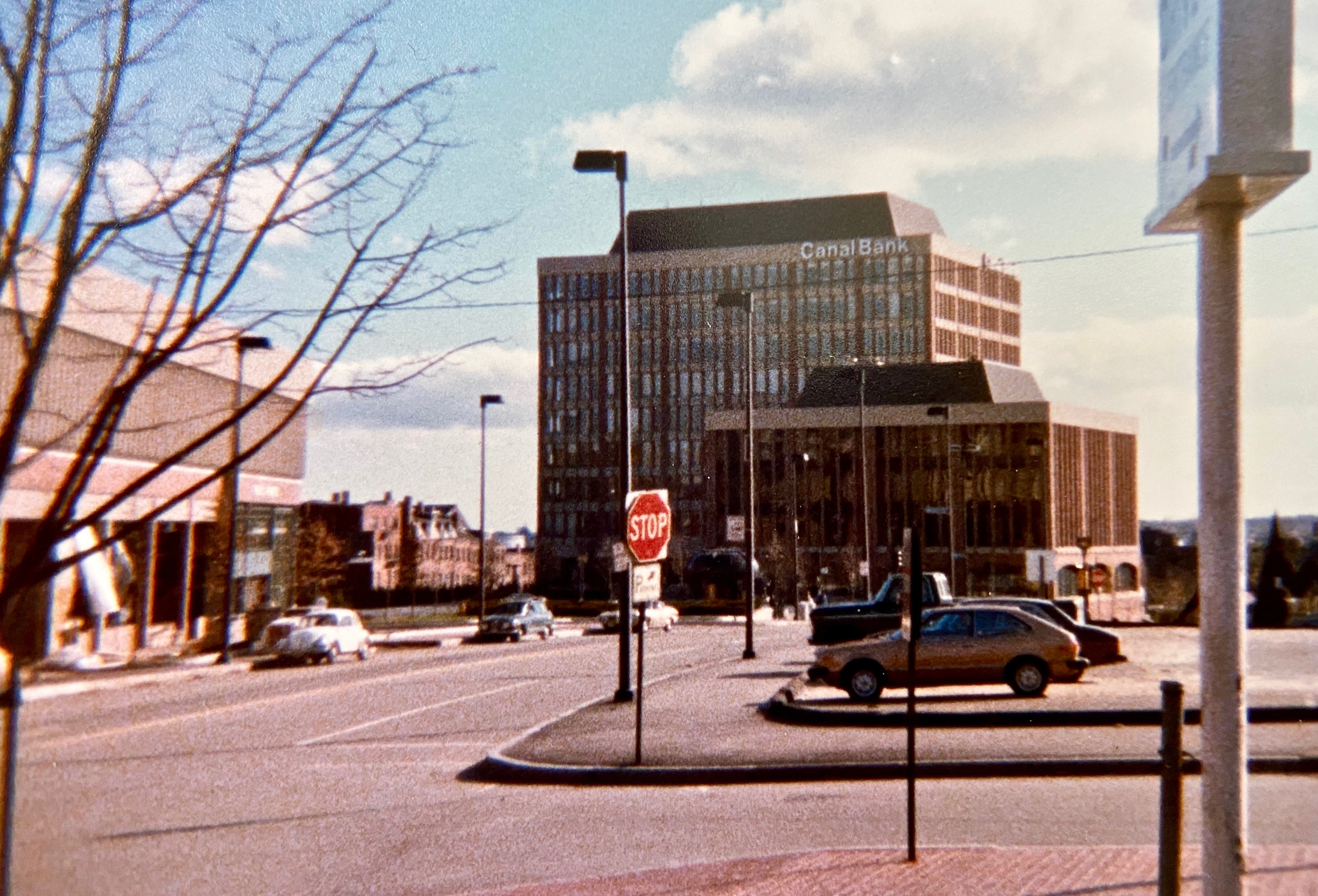 Temple Street in 1978. The garage was just getting ready to open with the movie theater expansion still years away from being built. The One City Center lot remained vacant for many years until it was finally completed in 1985. The Maine Bonding and Casualty Building lot where I took the photo from was torn down to make way for Two Monument Square a few years later. Notice there is no 3 Canal Plaza or One Portland Square yet. That is my styling Honda Accord to the right!
Last edited: Sep 14, 2021
M

I note that Temple was still on its original alignment, along the front of the garage ("Maineway Plaza"? I never heard that one before!). Realignment to line up with Union must have come later? (I didn't drive yet so that aspect is dim in my memory.)

I didn't realize (or remember) there were ever TWO of those telephone booth mushrooms! (The other was in Monument Square.)
P

You're correct and how the world has changed, now you can't find a phone booth anywhere except for maybe in an airport, hospital or police station. The "Maineway Plaza" was a marketing concept by a potential developer who's vision never materialized. Shortly after, the city dubbed the parcel as the "Golden Triangle" and came up with a design contest for interested architects from around the country to come up with ideas and renderings for what should be built on Maine's most valuable piece of urban real estate. There was a cash prize for the winner and a few of the top designs were actually very close to what was eventually (One City Center) built. I think I still have the original contest package with all of the rules, slides and parcel diagrams unless I gave them to Patrick many years ago. 1970 through 1990 were exciting times for downtown Portland and there always seemed to be a new building or project either under construction or in the planning stages during that 20 year period. We are now experiencing another amazing window of growth and renewal without tearing down any significant historical structures, it's now all about infill!
Last edited: Sep 14, 2021
C

It's hard to read, but it looks like the billboard for the Maineway Plaza in Portlander's first photo says that the building would have been designed by The Architects Collaborative.

That was Walter Gropius's firm in Cambridge MA, one of the most prominent modernist architecture firms of the mid-20th century. Now I'm super curious about what the "Maineway Plaza" proposal was.
P 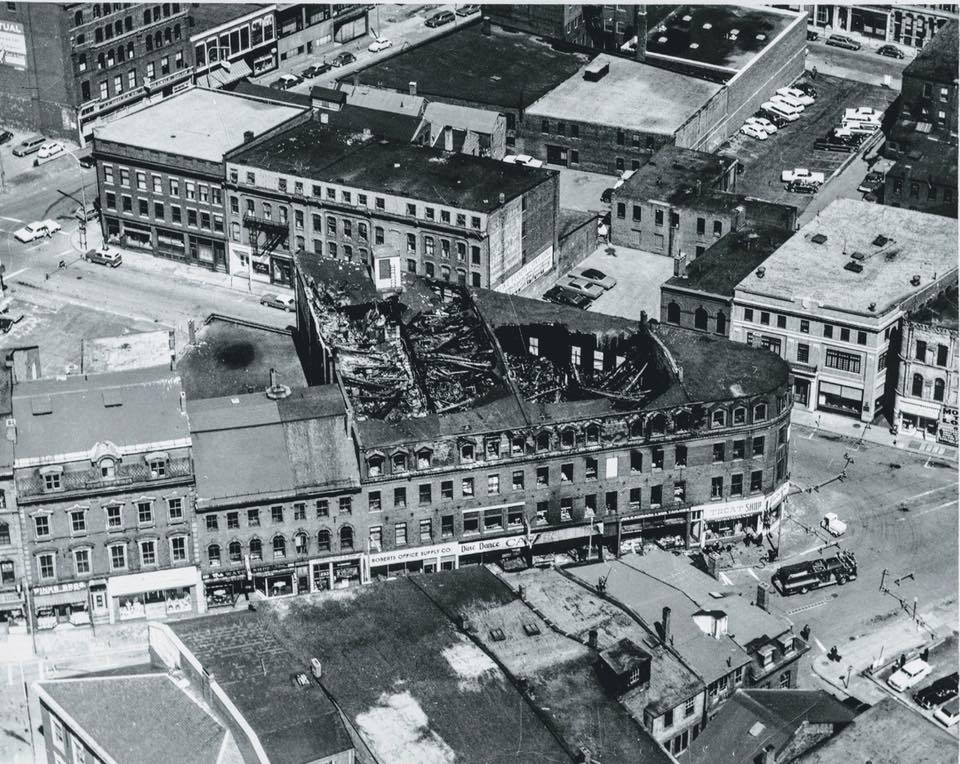 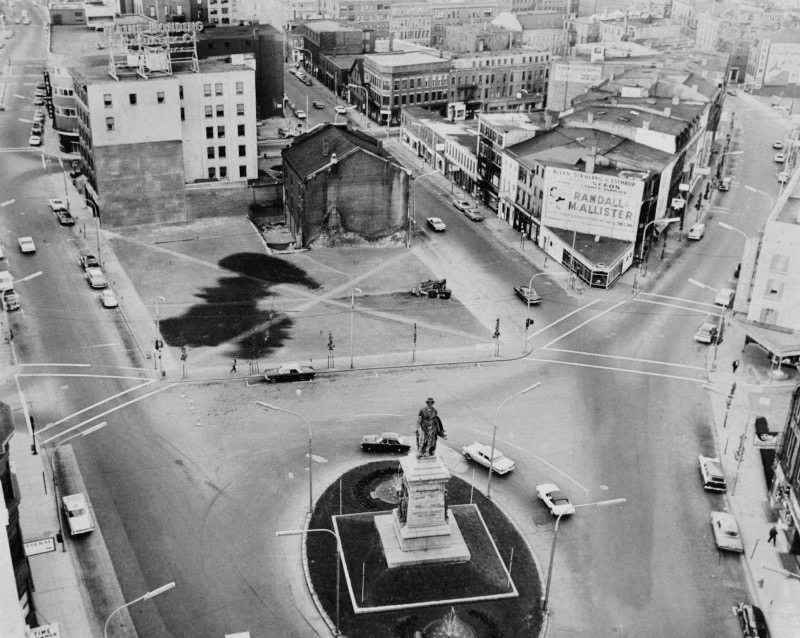 A few more photos showing the "Golden Triangle" and how depressing Portland was in the late sixties. The Maine Bonding and Casualty building is visible in the top left along with the corner where 200 Federal Street will be built.
R

I don’t see that as depressing. I see a fine-grained street wall, which today would be ripe for re-use as vital streetscape. The streets are wide, but that would be space available for a complete street.
D

I know opinions will differ, but I do wish we still had some of these buildings and the Old Port were further revitalized. They tore down a ton of buildings for One Portland Square, many of which are still empty parking lots today. From what I recall, most of those were old crappy wooden buildings and not much historical significance. It would have been nice to see a cluster of towers there (or even at Top of the Old Port) and retain the historic buildings and architecture. Or the building we see in the East End now - the tall buildings could have gone there. I still wish Portland had more vision and kept Grand Trunk and Union Train Stations. At least one could have been used as a commuter rail into downtown, or to Boston, NYC, Quebec. The other train station would have been ideal for a public market, event hall, wedding receptions, art museum, library, and so on. Instead we have a crappy strip mall where Union once stood and the Grand Trunk location is being built up as we see now. I would have preferred to keep some of the beautiful theater buildings instead of gaining more ugly parking garages. Hell, they could have just razed most of Back Bay where Midtown would have been built and that would have had more vision. The abundance of beautiful churches too - demolished for parking lots, gas stations etc. Those could have been better suited for theaters, school spaces, art studios, housing. I may not have the most popular opinion; but there were plenty of other places where things COULD have been built in Portland. Half of Bayside is full of empty lots begging to be built upon. I'd trade the entire Shelpley block to keep a block of what we lost.
P

Depressing was meant to describe the overall vibe going on in Portland as a whole during that period which was similar to many small to mid sized cities throughout the country. Downtowns were on the decline and the shift to the suburbs was well underway and cities in the frost and rust belt areas suffered the most and some never recovered. Greater Portland Landmarks and local historians were instrumental in being proactive in the early stages of urban renewal to help save numerous structures after the razing of Union Station and the beautiful Post Office in the Old Port. Portland's downtown landscape would have been scarred to a much higher degree if it wasn't for their efforts and vision.
Last edited: Sep 14, 2021
P 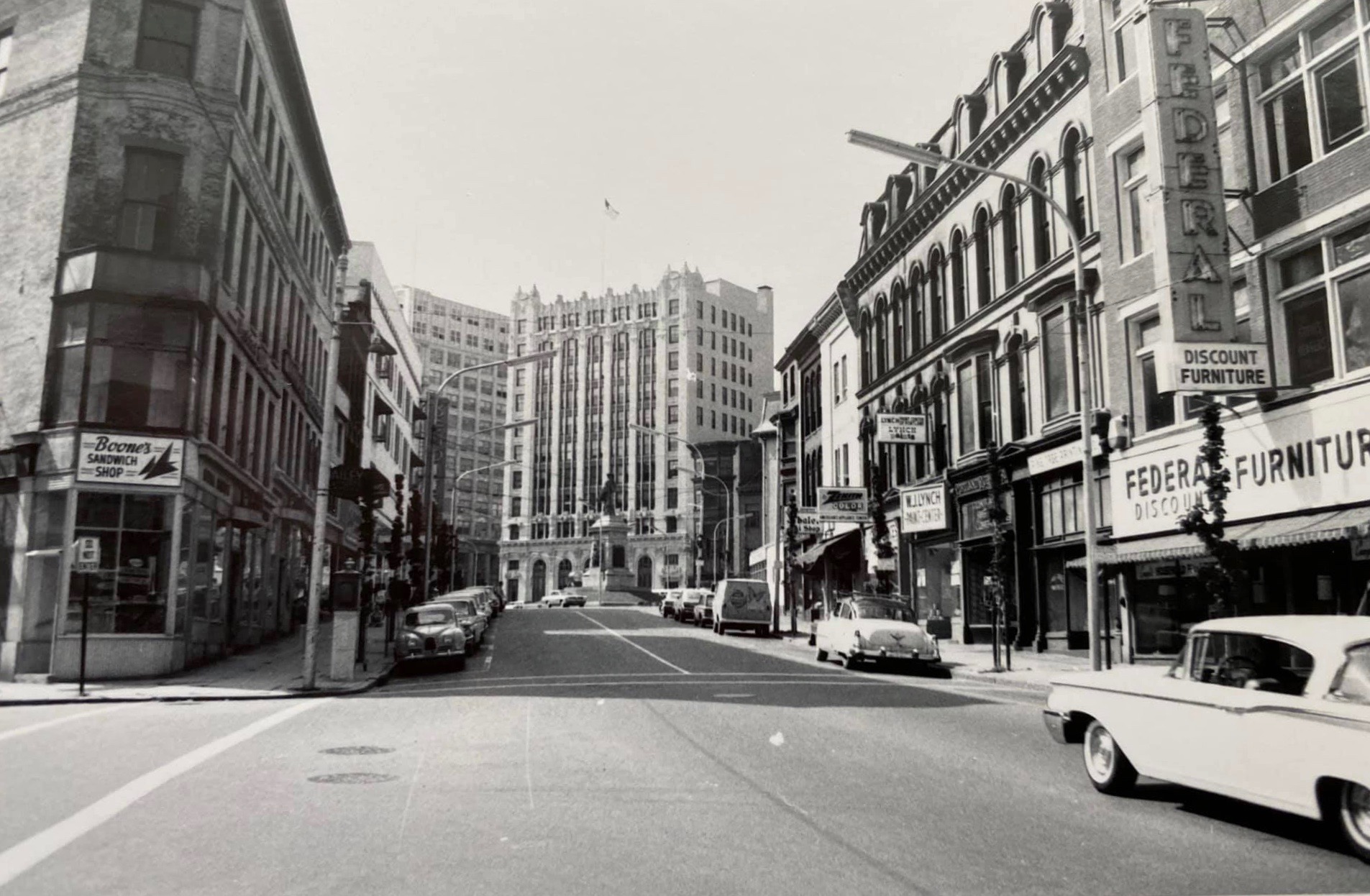 A view up Middle Street around 1964, notice the two floors have been added to the top of the Time & Temperature (Chapman) Building.
P 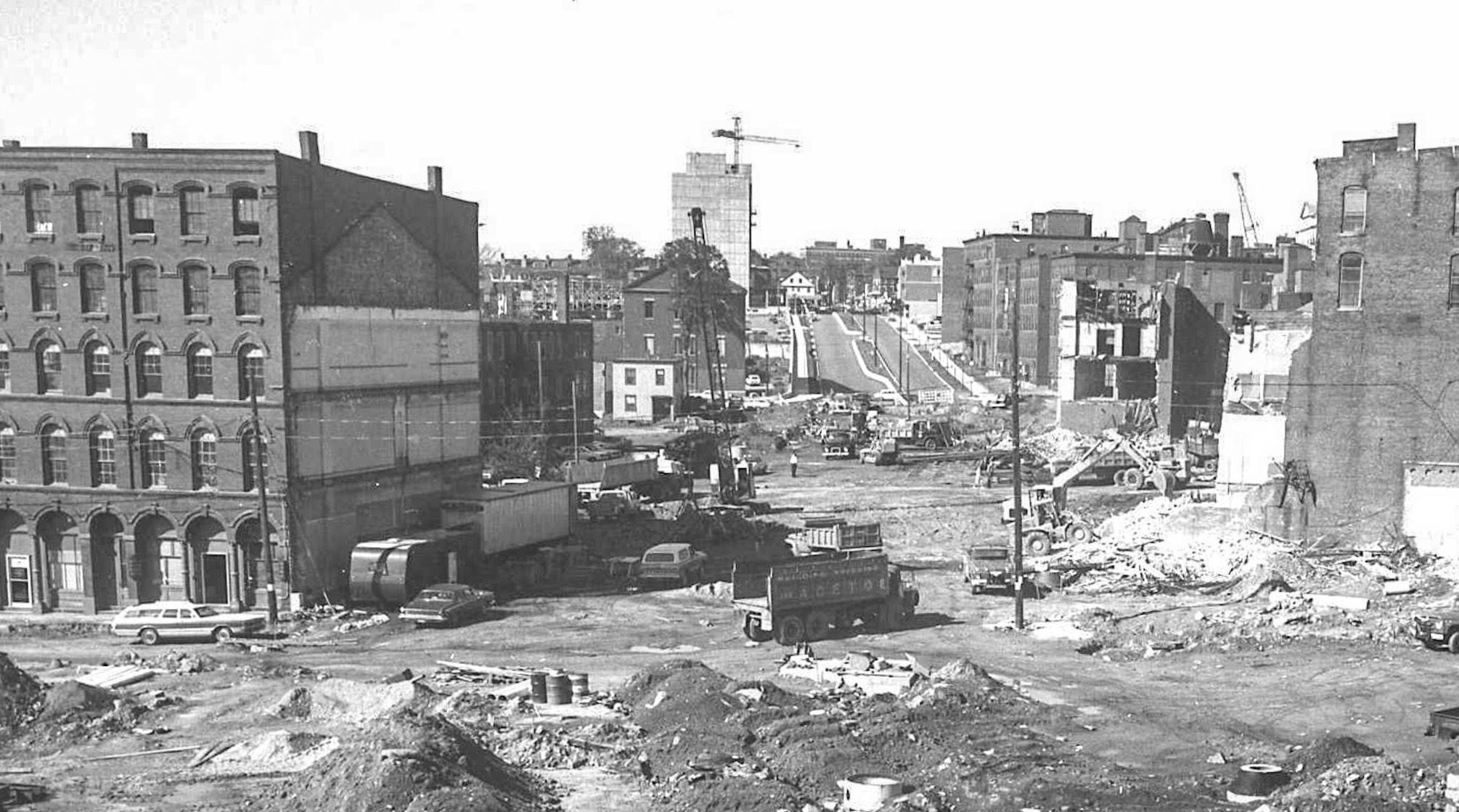 Portland in the midst of urban renewal around 1972. Holiday Inn was nearing completion and the Spring Street Garage was getting ready to start construction. Did not intend to sidetrack the thread but thought some of the older photos would give everyone a better perspective of what Portland was like during this transition period and it is in the neighborhood of where 200 Federal Street will be built.
Last edited: Sep 14, 2021
M

Portlander said:
Portland in the midst of urban renewal around 1972. Holiday Inn was nearing completion and the Spring Street Garage was getting ready to start construction. Did not intend to sidetrack the thread but thought some of the older photos would give everyone a better perspective of what Portland was like during this transition period and it is in the neighborhood of where 200 Federal Street will be built.
Click to expand...

That photo also shows something important: before the renewal projects like MaineWay, Spring St. was a dead-end just east of Center St. It was the overall renewal plan that both extended it to meet Middle and also shifted Temple to intersect Middle at Union. Today we might wonder why that T intersection has 4 different street names but it's hard to imagine driving through that part of the city without it.

And now I'm the one off-topic for the thread.
R

Portlander said:
View attachment 16744
Temple Street in 1978. The garage was just getting ready to open with the movie theater expansion still years away from being built. The One City Center lot remained vacant for many years until it was finally completed in 1985. The Maine Bonding and Casualty Building lot where I took the photo from was torn down to make way for Two Monument Square a few years later. Notice there is no 3 Canal Plaza or One Portland Square yet. That is my styling Honda Accord to the right!
Click to expand... 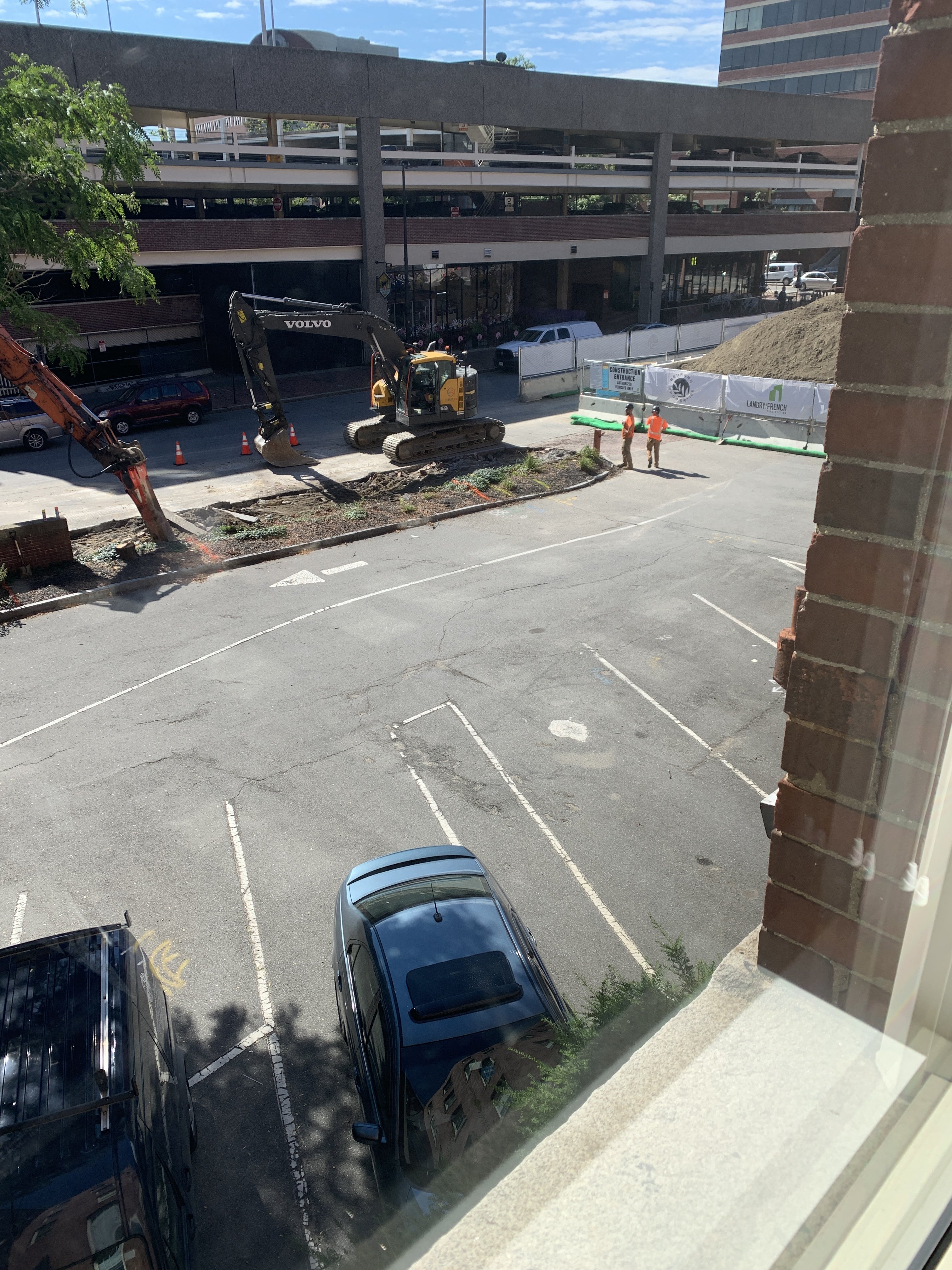 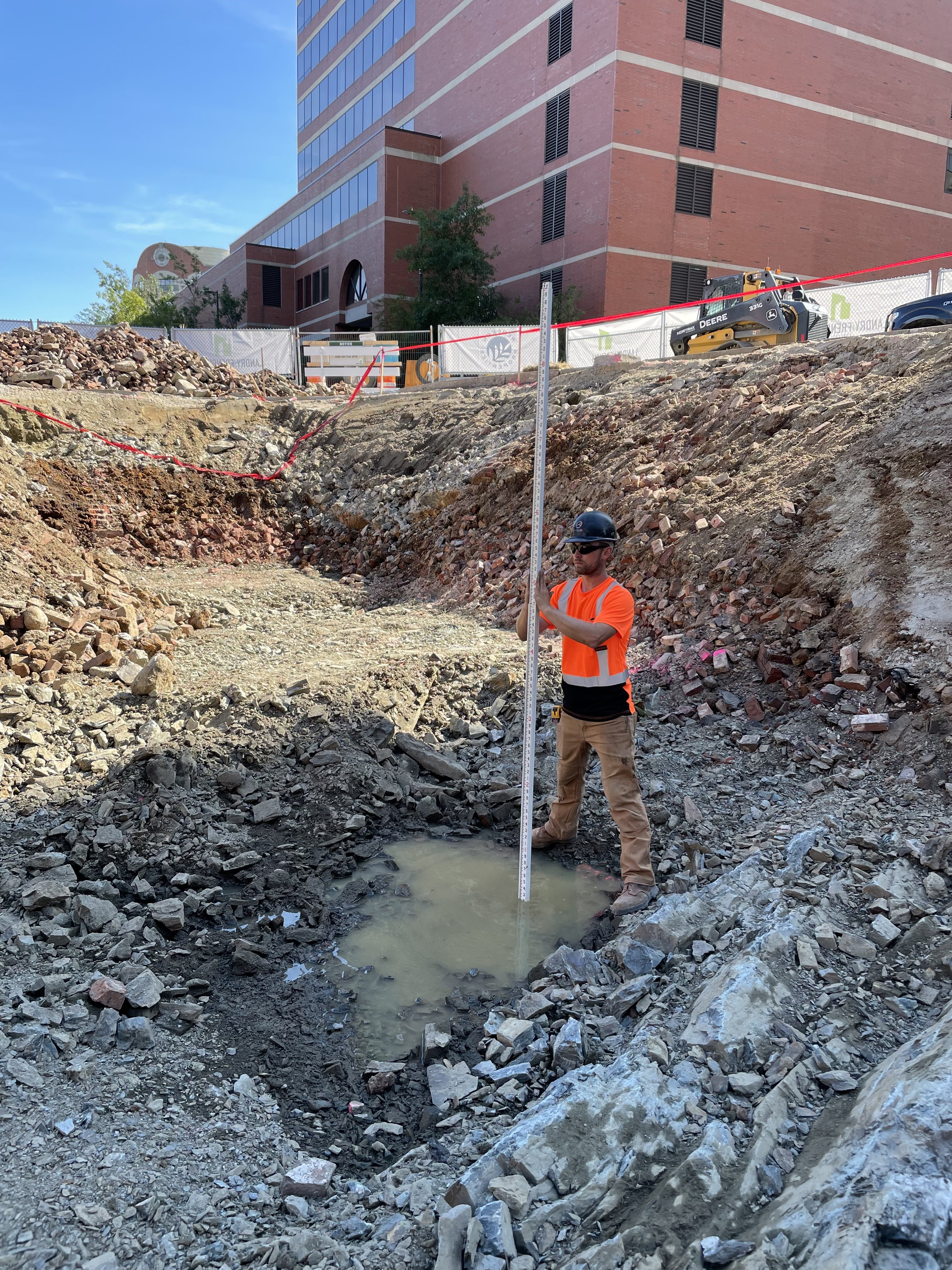 hit ledge a little earlier than expected - knew it had been scraped bc of the other foundation you eagle eyes noted. Trying to figure out where exactly the solid ledge begins - solid hole we have started! ~ C
P 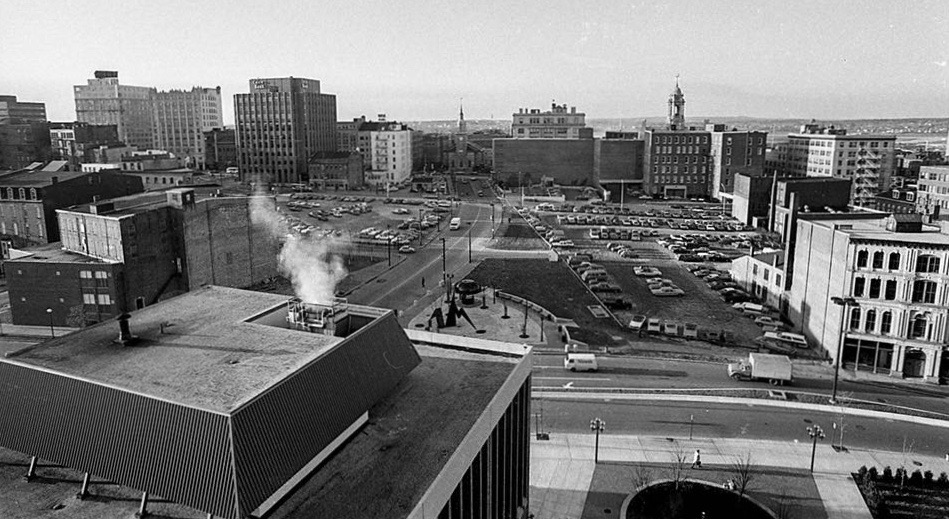 View from the top of One Canal Plaza from around 1976. Temple Street Garage was in the planning stages. Maine Savings Plaza (511 Congress) top left was just added to the skyline in 1975. Two City Center (Sotheby's) was still over a decade away from being built on the grass parcel where the steam is coming from the roof. The lot where 200 Federal Street is going has been razed along with most of the surrounding lots. Notice that the "Michael" sculpture is actually located in the plaza where the current "Lobsterman" statue sits. Also another view of the second telephone mushroom for markhb. I promise no more old photos for a while!
M

"Urban renewal".....what a joke. It looks like they were clearing space for the Maine Mall! Yuck.
R