Moving this discussion from "New construction continued" the article mentions that Soley / East Brown Cow submitted a zoning application. Can anyone find this on the city website or self service portal? From the Press Herald article: 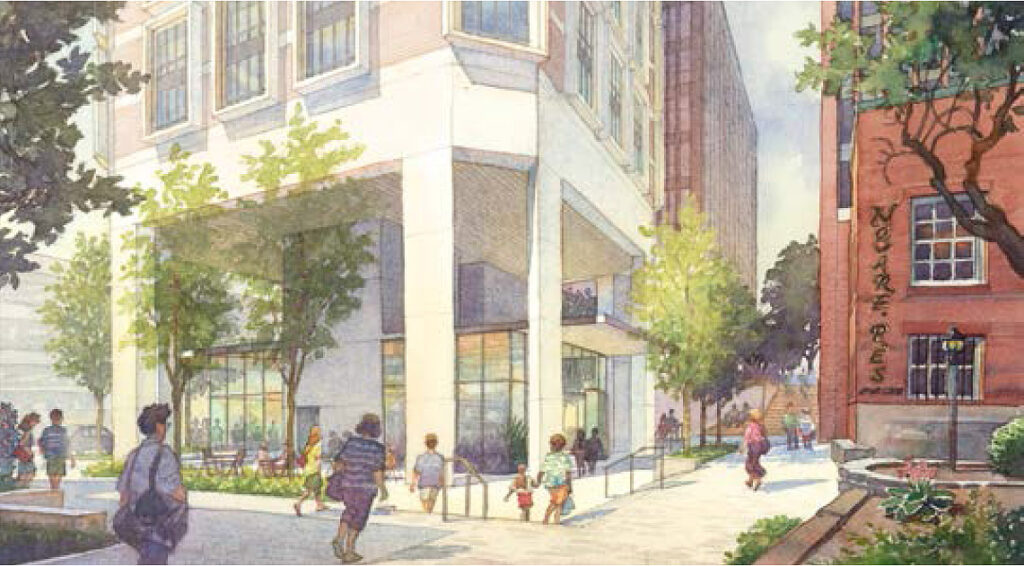 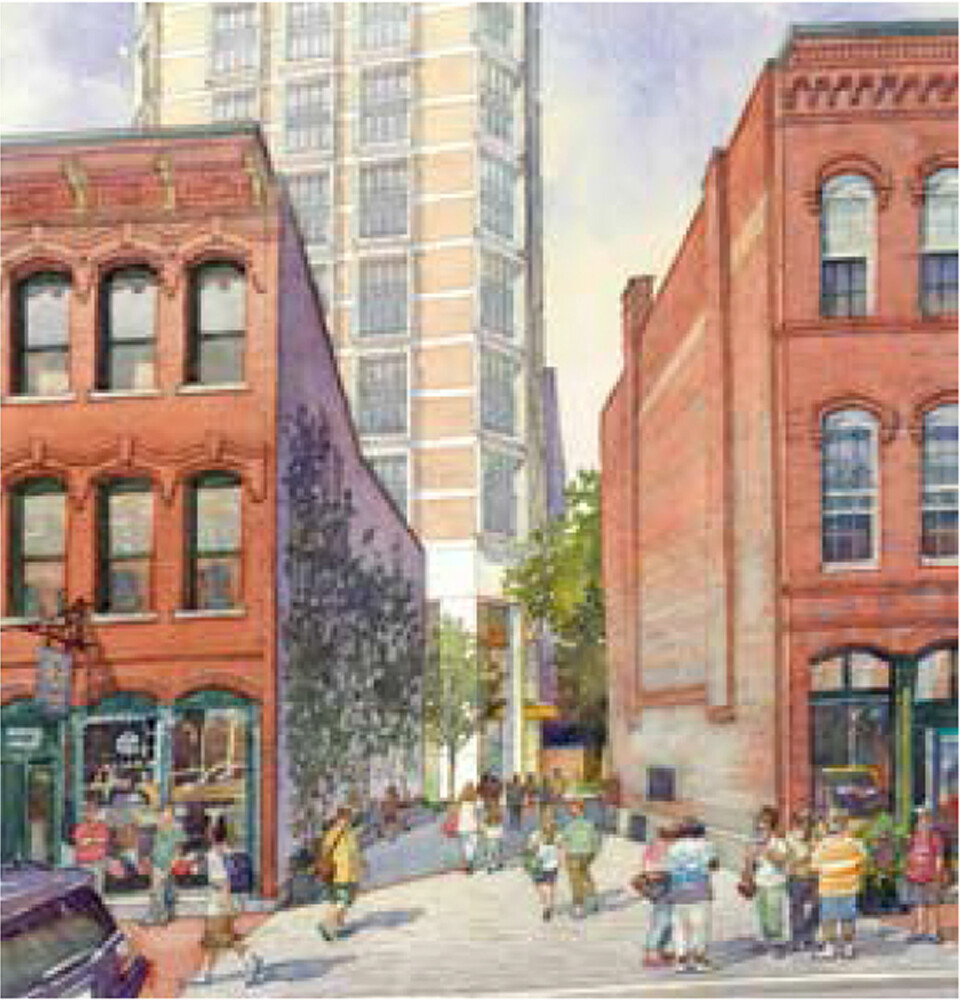 I know these are preliminary / concept drawings, but i'm not huge on the design. Something about it makes it look like a 1960's urban renewal tower in my eyes. I think it's the 45-degree angled corners and the striping along the brick cladding.
M

Somehow I was under the impression that the proposed tower was going to be over on the Union Street side of the plaza, just behind/uphill from the Hyatt, and would replace or be built in top of whatever's in that fenced in area. It looks like electric or mechanical stuff in there.

I just went on Google Earth to look at the spot where he's proposing this tower -- it's tight! I mean it looks like 60ft. x 60ft.

There are numerous "skinny" skyscrapers being built or already completed in New York that have similar or even smaller footprints that exceed 60 floors.

Aside from some of the issues with the site and the design of the building, I'm cautiously optimistic. If anyone can get a tall building built in the city, it's Tim Soley / East Brown Cow. He has the political and economic capital to make this happen. And I'm virtually positive that he's spent a considerable amount of time behind closed doors with planning staff to make sure that this is zoning change isn't a waste of time.
M

The most-recent plan idea for height in Portland was to allow the greatest heights along Congress St. at the height of the peninsula, and step down as you went towards the water on either side, and to allow additional height if you stepped back from Congress as you went up (to keep Congress from becoming a total canyon). The allowances are even still marked on the zoning map; the problem is that the Historic District on Congress largely negates any opportunity to redevelop that stretch.

As pointed out by Cneil on Twitter. The application for this project shows that the developers are working with the globally illustrious Safdie Architects. If true, that would put an incredible amount of muscle and legitimacy behind the project.
H

Does anyone think this looks a little too much like the Winston Towers in Arlington?

Hubman said:
Does anyone think this looks a little too much like the Winston Towers in Arlington?
Click to expand...

After looking at the PPH article a little more, I have a suspicion and those illustrations from the article are quite old, and that the design of this new tower is going to be substantially different. It's very uncommon for modern projects to use illustrations like that instead of renderings.
P

Peter Munro is alive and well according to this article in Portland..
The tallest building in the state could be built in Portland’s Old Port if city councilors approve a proposal to allow developers to build beyond height limits if they create public spaces at ground level.
Tim Soley of East Brown Cow Management, which owns 14 properties in the city, submitted the zoning amendment request Dec. 11, 2019, that would award height bonuses resulting in buildings of up to 299 feet in exchange for open space that would be accessible to the public and preserved through public access easements held by the city.
The property Tim Soley hopes to develop under a requested zoning rule change is currently a parking lot behind Canal Plaza. (Portland Phoenix/Jordan Bailey)
The tallest building in the state is listed in a 2018 Business Insider article as Agora Grand Event Center in Lewiston, formerly St. Patrick’s Church, whose spire reaches 220 feet. Not including buildings with spires, the tallest building in the state is Franklin Towers on Cumberland Avenue, at 175 feet.
A group called Keep Portland Livable is not convinced the Old Port is a good place for such a tall building, regardless of how much public space is created. Portland residents Tim Paradis and Paul Munro, in a statement submitted to the Phoenix, said such a building would “disfigure the human scale and architectural cohesion that has made this historic district the crown jewel in Portland’s renaissance.”
It would shadow the surrounding streets and increase wind, they said, especially around the building’s base, making the proposed public area “windswept, cold and uninviting.”
In addition, Munro and Paradis said, “It would damage Portland’s brand, the very reason that visitors and new residents – from places like Boston and Brooklyn – are flocking to our city to escape what their home cities have become.”
They argue that taller buildings make sense on the ridge of downtown along Congress Street (where 210-foot buildings are allowed, according to the city’s height overlay maps) “helping to form a Portland skyline and funneling winds up and over the streets below – and around the gateways to downtown.”
The property Soley would like to develop is tucked into a nook in the boundary of the Old Port Historic District, behind buildings on Exchange Street with 65-foot height limits. A Almost forgot about this from last Spring's MEREDA report, which shows a similar design to the building as shown above from the PPH article: 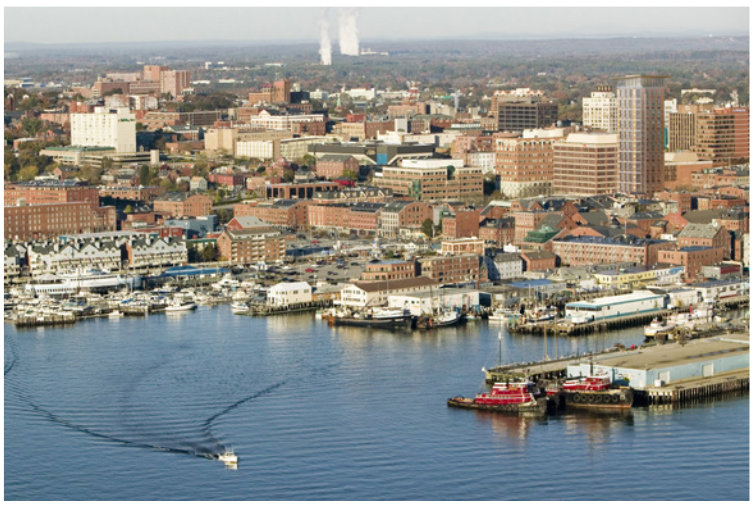 Anything on the peninsula should be fair game if it is next to old Port. I really like the rendering.

The footprint of the building is smaller than I had envisioned. I wish Tim Soley the best in the upcoming difficult process and hope it eventually gets built. Wonder if he has a minimum floor count that he would accept to move the project forward and keep it financially feasible, Im guessing 18 stories @ 200 feet.
P

It's happening. Rumor has it.

PortlandLifeGuy said:
It's happening. Rumor has it.
Click to expand...

This project still hasn't even gone through the necessary zoning change process, let alone the site plan approval. It has a LONG way to go before shovels hit the dirt.

I'm skeptical...the economy is showing signs of an oncoming recession, and that alone could kill this project. Portland is arguably already oversaturated with hotel rooms and upmarket residential (the two elements of this project) and any economic slowdown would hit those two sectors of real estate development particularly hard.
O

Oneup said:
Pretty sure every big tall project Portland has always gets killed by a recession