Decided given the prospective scope, this deserves its own thread.

List of attendees, GSA industry day. No MIT, unless they are silent partners with an entity that did attend.
http://www.gsa.gov/portal/mediaId/1..._Attendee_List_9-20-2014_w_GSA_and_DOT.action

i know i know i know this more pan-kendall than the volpe, but thought id place them here anyway - some of these crop up on other pages of this site, but hell, history is cool:

#1, what might have been... NASA rendering, back in the day
the rest of the picture is more interesting than the render
the round fountain/globe thing was a roundabout
lots of parking lots, but not that many
a less suburban/weird binney street
much smaller building footprints adjacent to the volpe site
and the coolest, the little residential buildings in the lower right 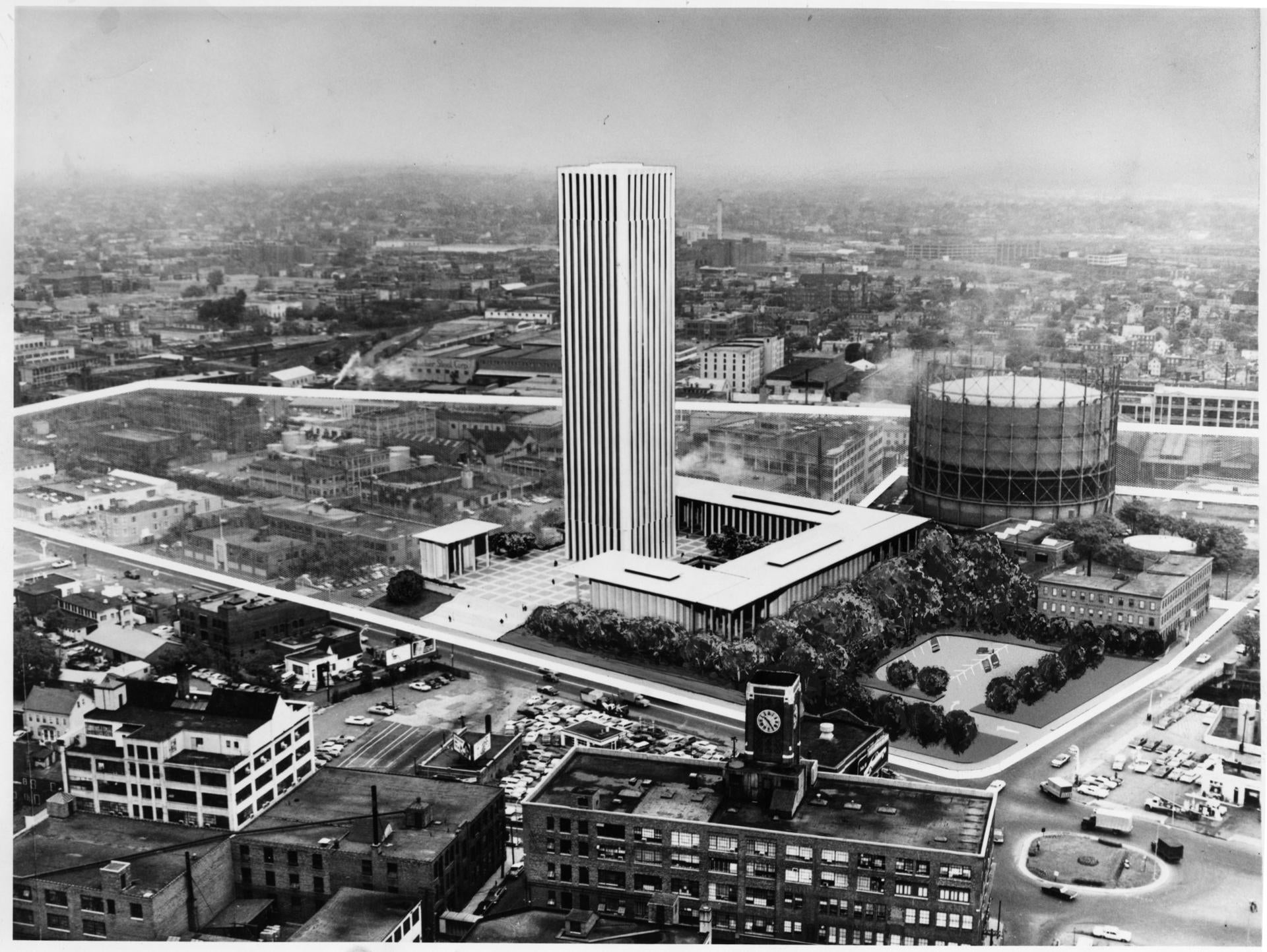 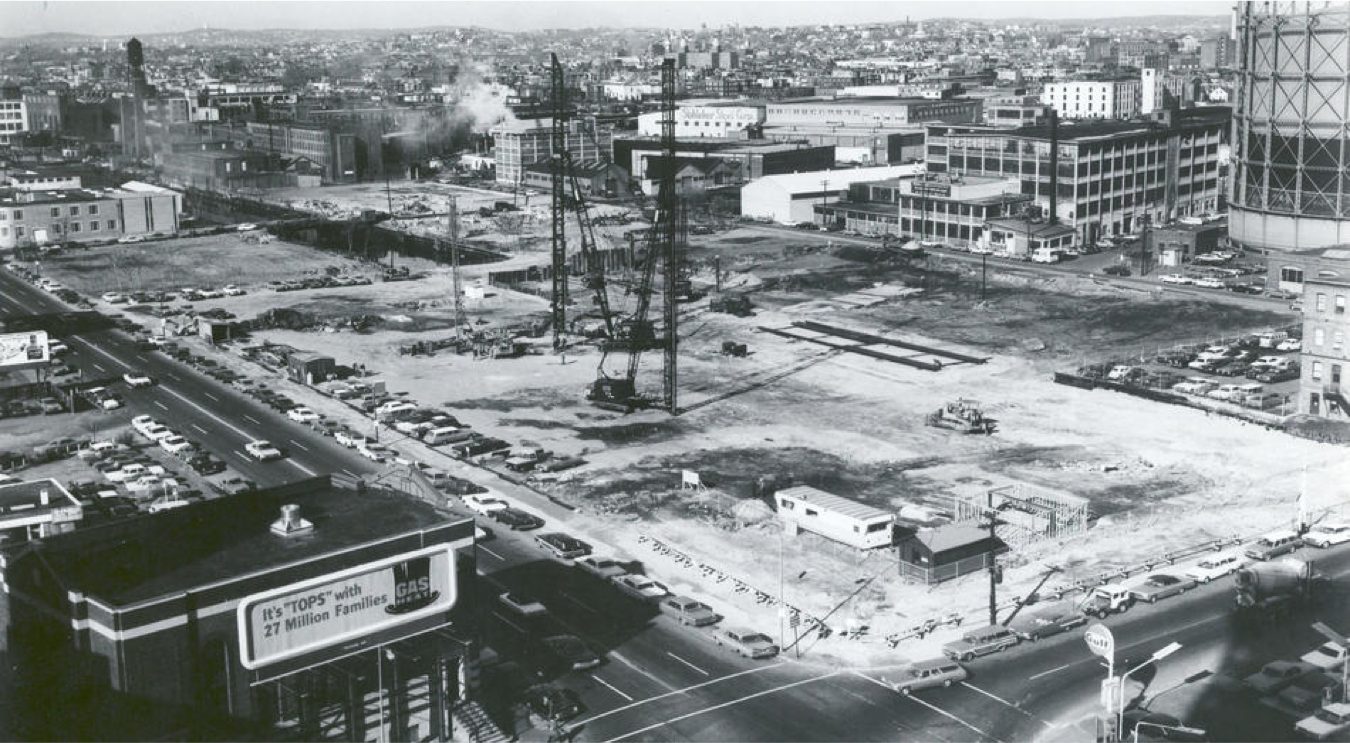 (source: http://blog.samseidel.org/2013/03/kendall-square-brief-historical-sketch.html has many goodies) 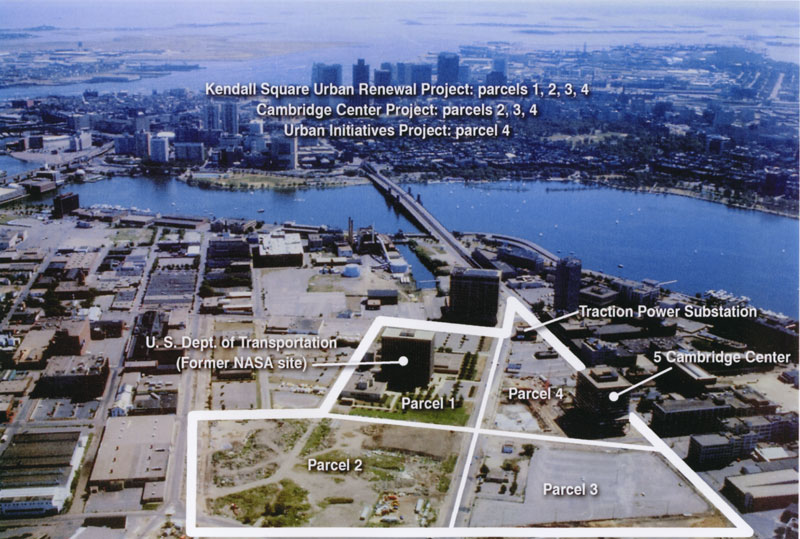 (source, http://cambridgecivic.com/?tag=kendall-square with many more goodies)

More pics and history of the area
http://www.cambridgeredevelopment.org/history/

Holy crap, I WISH that was built!
3

That last picture of Kendall in 1990... Hard to believe how much it has changed.
W


meddlepal said:
That last picture of Kendall in 1990... Hard to believe how much it has changed.
Click to expand...

has several instructive comments in it:

The 1970-77 period involved two major activities:
(1) The execution of land preparation activities in order to transform a 43-acre industrial slum into vacant land for new construction. The activities required the acquisition of 70 parcels of land, relocation of the Broad Canal to an underground water system, relocation of nearly 100 businesses, demolition of 50 buildings, construction of infrastructure, and formation of new traffic patterns of circulation.....
(2) The resolution of planning issues in order to amend the Kendall Square Urban Renewal Plan to designate new reuses for the land. Activities included negotiations between the CRA, DOT, and the U.S. General Services Administration to retrieve the rights to develop 10 acres of vacant land left behind by NASA; and rejection by the Cambridge City Council of four redevelopment plans prepared by a task force comprised of representatives from a cross section of Cambridge organizations working with the CRA.
In 1976, the CRA engaged the Urban Land Institute’s (ULI) advisory panel services to review the Kendall Square Project and propose ways to help break the multi-year planning deadlock. Among the "Findings, Conclusions, and Recommendations" of the ULI panel:
• Only a few properties in the country have a broader array of locational advantages as the Kendall Square area and the opportunities associated with the Kendall Square Urban Renewal Project: Cambridge Center is a unique opportunity area, one that should be reserved to maximize its locational advantages.
• The MBTA’s Kendall Station subway is one of the more spectacular assets affecting the redevelopment potential of the CRA’s Cambridge Center project (emphasis added).
• Attracting developers will not be easy. Citizen concerns, political pressure, economic uncertainty, the absence of a united and strong development process, high taxes, environmental constraints, contentious political climate, and congested surface transportation have combined to create a credibility problem with the real estate development community relative to the City of Cambridge. With few exceptions, the lack of credibility has been a severe restraint to real estate development in Cambridge.
• These development problems are such that all but the most determined developer, the one who perceives a very close relationship between locational advantages and development opportunities, will be deterred from coming into the community (emphasis added).
Engaging the ULI greatly helped to break the planning deadlock because the panel’s expertise gained the confidence of the Cambridge City Council and the CRA. The panel advised the CRA to make extraordinary efforts to impress potential developers by efficiently completing site preparations and all major pre-physical development activities. The CRA responded by removing legal and technical impediments to development by completing an Environmental Impact Statement; securing plan and zoning amendments; carrying out a $7-million public improvements program; and implementing traffic circulation plans, such as widening Binney Street to provide direct major access to Memorial Drive.
In 1977, Cambridge City Council approved a mixed-use development plan for the Kendall Square Urban Renewal Project. For marketing purposes the name Cambridge Center was adopted to refer to the 24 acres in the Kendall Square Project Area separate from the land occupied by DOT. In 1978, the CRA invited proposals to develop Cambridge Center, and in 1979, selected Boston Properties as the initial developer.
Phase 2. 1980-Present. The objective was to sell the vacant land created during Phase 1 for private development.
The CRA and Boston Properties executed a Development Agreement which provided that the CRA would sell land to Boston Properties in stages after approval of development plans; and Boston Properties was required to start construction of an office building within seven months of signing the agreement.
Click to expand...

I think it's dubious that it would difficult to find developers for smaller parcels, considering that a million smaller projects are happening all the time.
S

I'm trying to imagine the Broad Canal still being there (instead of under). It's a real shame they felt that was "required" to redevelop the area. A canal could really add to the human experience in the area. Also, provide some nice cooling in the summer time, and most likely help with some of the major rainwater management in the area. Too bad.
W


BussesAin'tTrains said:
I think it's dubious that it would difficult to find developers for smaller parcels, considering that a million smaller projects are happening all the time.
Click to expand...

Busses that's not the point -- how does that Granny tell off the other one on the E-surance hack at GEICO?

Today, of course there is no problem except to find a piece of property that can be developed anywhere in Kendall / East Cambridge near the Charles River

I would love to see the Broad Canal daylighted through the Volpe property, with a turning basin of sorts at the end.
F

One thing I just noticed in the 1980 photo; the old Hotel Madison still sitting there by North Station...


RandomWalk said:
I would love to see the Broad Canal daylighted through the Volpe property, with a turning basin of sorts at the end.
Click to expand...

That's my fantasy too, but there's no way they turn land this valuable into water.

(source, http://cambridgecivic.com/?tag=kendall-square with many more goodies)
Click to expand...

That's wild! I tried to line this up as well as I could via Google Maps and the difference is staggering:

The 3D map doesn't include any of the newer buildings on Binney which are under construction either. What a difference we'll see even in just a few years when those are finished along with the Volpe development, the MIT projects, along with the other planned infill projects.
M

So, almost 3 million sf of new development on the 14 acre site? Good news.
Almost equal parts commercial and residential? Good news.
Heights increased to 250 on most of the property & some up to 300 (residential only)? Good news.

I'm not sure I'm on board with the $10/sf levy however. It sounds like a novel approach, and I like it going towards open space upgrades, transportation upgrades, and workforce training. All good places to spend money. That's a pretty good percentage per sf if we assume new construction is $200/sf, that's 5% right off the top.

Cambridge does a great job of keeping it's taxes low. But, why is it the developers responsibility to foot the bill instead of spreading that out if you want to help out the entire City.

No advocating for higher taxes either, but posing the question from the other side. It might seem a little unfair to put it on just a few. No matter how wealthy those few might be.....
W 
whighlander said:
In the article it sounds as if Volpe would stay within the parcel either in a new structure or possibly the renovation of the existing building

It also seems as if the part of the project occupied by the Feds would be exempt from the zoning on the remainder -- I suspect the latter will be controversial to say the least
Click to expand...

Actually, the article was pretty explicit that staying in a renovated building is NOT in the cards for Volpe. If the current building is renovated, it would be after Volpe moves somewhere new.

I'm not sure how controversial the zoning exemption will be... Volpe is a pretty well-known and unambiguous use. The only issue would be if the building proposed for Volpe is significantly taller than the others, say 450'+. I'd actually like them to try to push that envelope since this site has no direct NIMBY neighbors and is buried in the Kendall plateau, but I don't think Volpe needs that much space.
B


Equilibria said:
I'm not sure how controversial the zoning exemption will be... Volpe is a pretty well-known and unambiguous use.
Click to expand...

The new height limits requested here are perfectly reasonable. What is unreasonable is the guaranteed yowling from (and I don't like having to keep describing them this way but it's true) activist moonbats. They will object because of ideology not because they have a legitimate complaint. They will object because objecting to taller buildings is one of their sacred dogmas to say nothing of their love for petty, obstructionist power plays. The tantrums they are throwing over the Sullivan courthouse is a perfect example.
W


Equilibria said:
Actually, the article was pretty explicit that staying in a renovated building is NOT in the cards for Volpe. If the current building is renovated, it would be after Volpe moves somewhere new.

I'm not sure how controversial the zoning exemption will be... Volpe is a pretty well-known and unambiguous use. The only issue would be if the building proposed for Volpe is significantly taller than the others, say 450'+. I'd actually like them to try to push that envelope since this site has no direct NIMBY neighbors and is buried in the Kendall plateau, but I don't think Volpe needs that much space.
Click to expand...

It does not appear from the RFI that the government is interested in leasing new space. Leased space in a privately-owned building would be subject to zoning.

The government has specified that the new building will require security setbacks. What the government really wants is for someone to build a new Volpe Transportation Center building in or near Kendall, at no cost to the government. In exchange, the builder gets a large parcel of land in Kendall Square to develop.

Assume a developer devotes 90,000 sq ft of the current Volpe site for a new government building, and that building's hard construction costs are $175-200 million. In exchange, after open space, there are eight acres (of the remaining 12) that can be developed, so the cost per developable acre is around $20-25 million in the heart of Kendall Square. Such a deal!
You must log in or register to reply here.
Share:
Facebook Twitter Reddit Pinterest Tumblr WhatsApp Email Link