George_Apley said:
Damn, is that parcel as isolated by highways as it looks?
Click to expand...

I'm not sure isolated is the best word but 190, 12 and a RR line certainly is on the perimeter. It's not ideal for residential (too noisy) but anything else works.
M

It's pretty isolated... surrounded by industrial use and highways on all sides. Closest residential neighborhood is hike up a hill. The transformation of the former Worcester County Courthouse into a $54-million apartment complex has reached the halfway mark.
“We are on track to complete construction in late summer of next year,” said Michael Lozano, Trinity Financial’s senior project manager. “We are preparing to market the apartments next spring.”

The developer who is converting the former JH and GM Walker Shoe Factory on Water Street in Worcester into apartments has set his sights on transforming another manufacturing plant.

Anthony Rossi, principal of Rossi Development, confirmed his Chelsea company has a purchase and sale agreement for a soon-to-be vacant 47,000-square-foot factory at 33 Hermon Street.

Under the terms of the deal, the sale will close only if the city approves a zoning change to allow residential use at that location.

“I’m working with the city on the change and I’ve already spent money on a study, prior to the closing, on what must be done to make the site clean to meet residential standards,” Rossi said. “I’m willing to take on that burden moving forward because now I know what needs to be done.”

Still, if the Planning Board and City Council fail to approve housing for the district, there will be no deal, he said.

If approved, Rossi said he would remediate the parcel and redevelop the two buildings into apartments. Rossi said he has not decided on the number or size of the units.

“If the city does not allow apartments there, nothing will happen at that location,” he said.
Click to expand...

I’m glad to see the Walker Shoe Factory project is still on, the building looks in a precarious state.
Any news on the General Screw Machine project on Shrewsbury street? I see a lot of broken windows there as well.

cubalibre said:
I’m glad to see the Walker Shoe Factory project is still on, the building looks in a precarious state.
Any news on the General Screw Machine project on Shrewsbury street? I see a lot of broken windows there as well.
Click to expand...

Sorry for not replying earlier, but no. Has some plywood covering up some of the windows, but nothing visible construction wise.
C

I didn't see a dedicated thread for the Hanover Theatre but thought this was worthy of a post. Interesting assertion that the new casinos are taking acts away from the coveted Worcester theater and consequently reducing revenues. It will be interesting to see the long term impact. The Hanover Theatre in Worcester is feeling the pain from the new casinos in Massachusetts, having recently reported the loss of hundreds of thousands of dollars in unrealized income from acts drawn off by casinos or had to be paid more in an increasingly competitive market.

The developer of Worcester's Grid District has bought a Prescott Street building that went to auction in December.

MG2 Group of Quincy paid $1.1 million for the building, but the buyer's name wasn't immediately disclosed at the auction. The sale closed Feb. 4.

MG2 Group has developed a cluster of buildings on the south side of Worcester Common into dozens of apartments and a series of restaurants. The transformation of that space includes knocking down the former Paris Cinema into the Beer Garden.

The former manufacturing facility at 95-99 Prescott St. will give MG2 Group a smaller but similar opportunity to remake an old building in a different part of the city. The 32,000-square-foot brick building stands just down the street from Worcester Polytechnic Institute's Gateway Park, Courtyard by Marriott, Hampton Inn & Suites, and the mixed-use Washburn & Moen mill building on Grove Street.

MG2 Group is working with architects and a general contractor to plan how to create a new lobby and prepare the space for lease, Donovan said, which could be for office or other flexible space. Uses would likely be compatible with Gateway Park, which includes WPI labs, a PracticePoint incubator facility and Massachusetts Biomedical Initiatives' start-up labs.
Click to expand...

ReNew Tatnuck Square, an apartment complex in the Tatnuck area of Worcester, has been bought for $16.1 million by a California multi-family property firm.

The complex, formerly known as Tatnuck Arms, last changed owners in 2006 for $10.5 million. Northland, a Newton real estate firm, bought the site then.

The new owner is a limited liability corporation registered to the Irvine, Calif., office of FPA Multifamily. The firm's portfolio is largely on the West Coast.
Click to expand...

This complex is buried behind the McDonald's on Mill Street, and it's rather interesting that it has sold for this much.

Also, a pharmaceutical company coming to the Reactory complex on the grounds of the former state hospital is asking the city for a TIF.

WuXi is the first named planned tenant of the Reactory, a 46-acre campus of buildings proposed for the longtime Worcester State Hospital site. The Chinese firm has said it plans a $60-million facility to be its first such site in the United States.

WuXi could get a financial boost from both the city and state. Worcester Chief Development Officer Michael Traynor is proposing the City Council approve a 20-year tax break to save WuXi 40% of the tax bill the company would pay above the value the property is assessed at today.

WuXi's planned building would increase the value of the site from $1.5 million today to $36 million, Traynor said. While WuXi is estimated to save $11.5 million on its tax bill over the 20 years of the tax agreement, the city would bring in an estimated $20.8 million, he said.

The company has also received a $6-million tax credit from the Massachusetts Life Sciences Center, according to Traynor.

The Worcester Business Development Corp., a public-private business development agency, bought the site in phases in 2017 and 2018 and is marketing the site today to prospective tenants.

“We hope to close on the land sale with WuXi within the next 60 days, which will allow them to start construction this spring,” said Craig Blais, WBDC president and CEO.

WuXi is planning a 107,000-square-foot facility with 150 workers that the city says will average $70,000 per year in salary. The company's plans have called for a biologics clinical and commercial manufacturing facility able to handle both clinical and small volume commercial production, along with an early-stage bioprocess development lab.

The firm plans to break ground this spring and open by March 2022, Traynor said.
Click to expand...

Few updates from Main Street. There now is a local produce market at the Central Building that offers locally grown vegetables, fruits, meats, nitro brew on tap and other higher-end groceries not available downtown thus far. I cross my fingers for them. 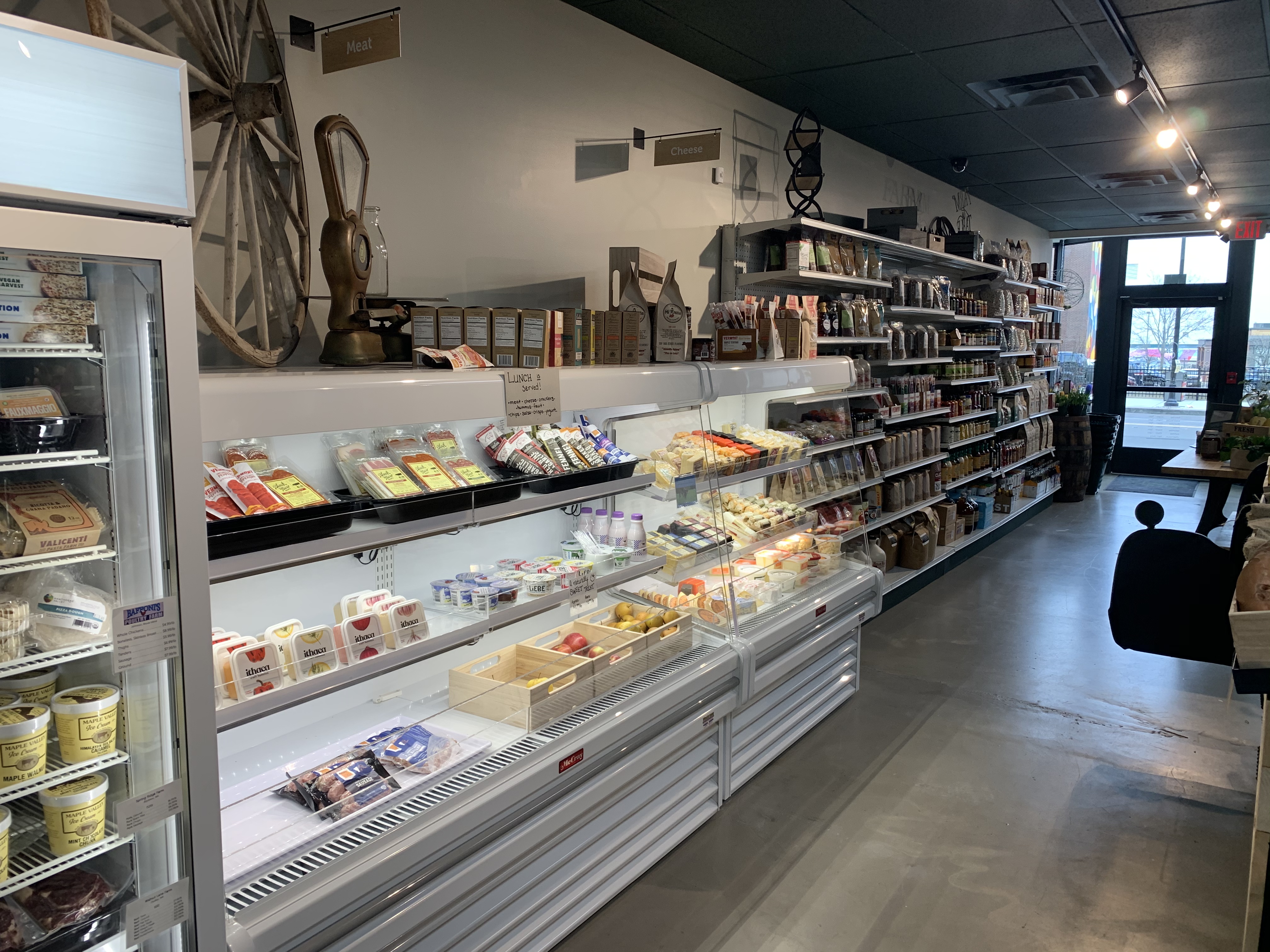 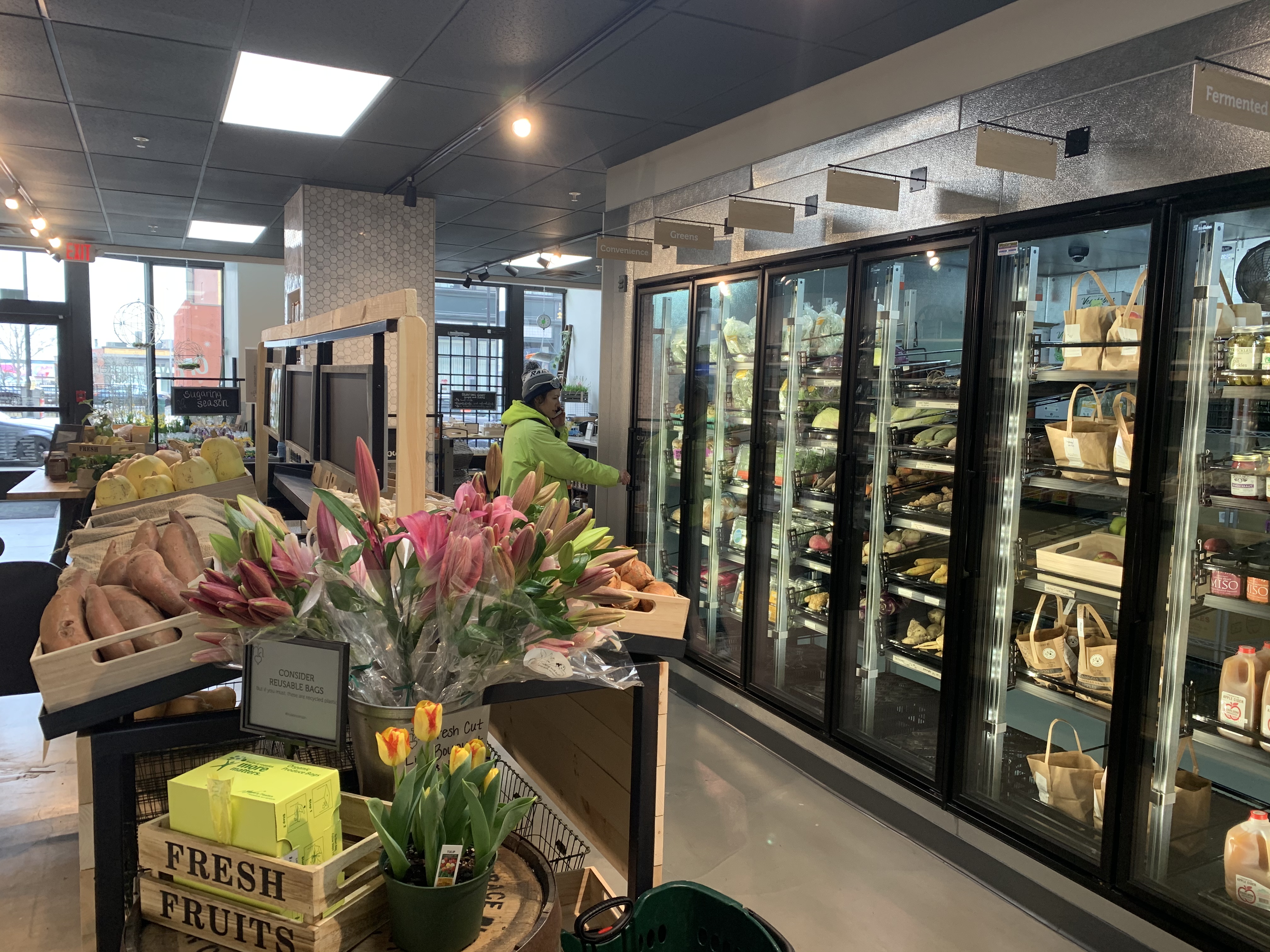 Work is progressing on the old courthouse which is converted into apartments: 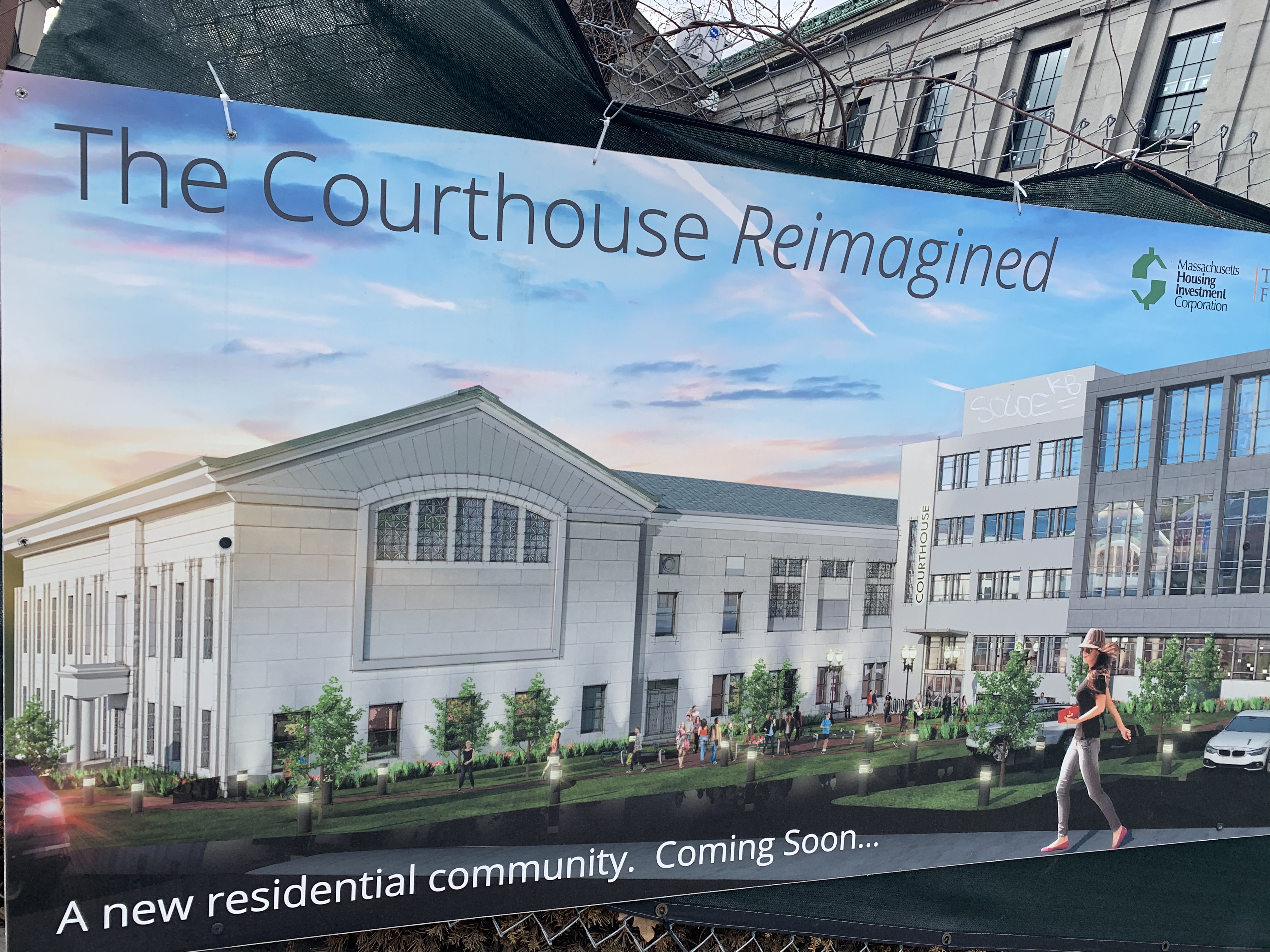 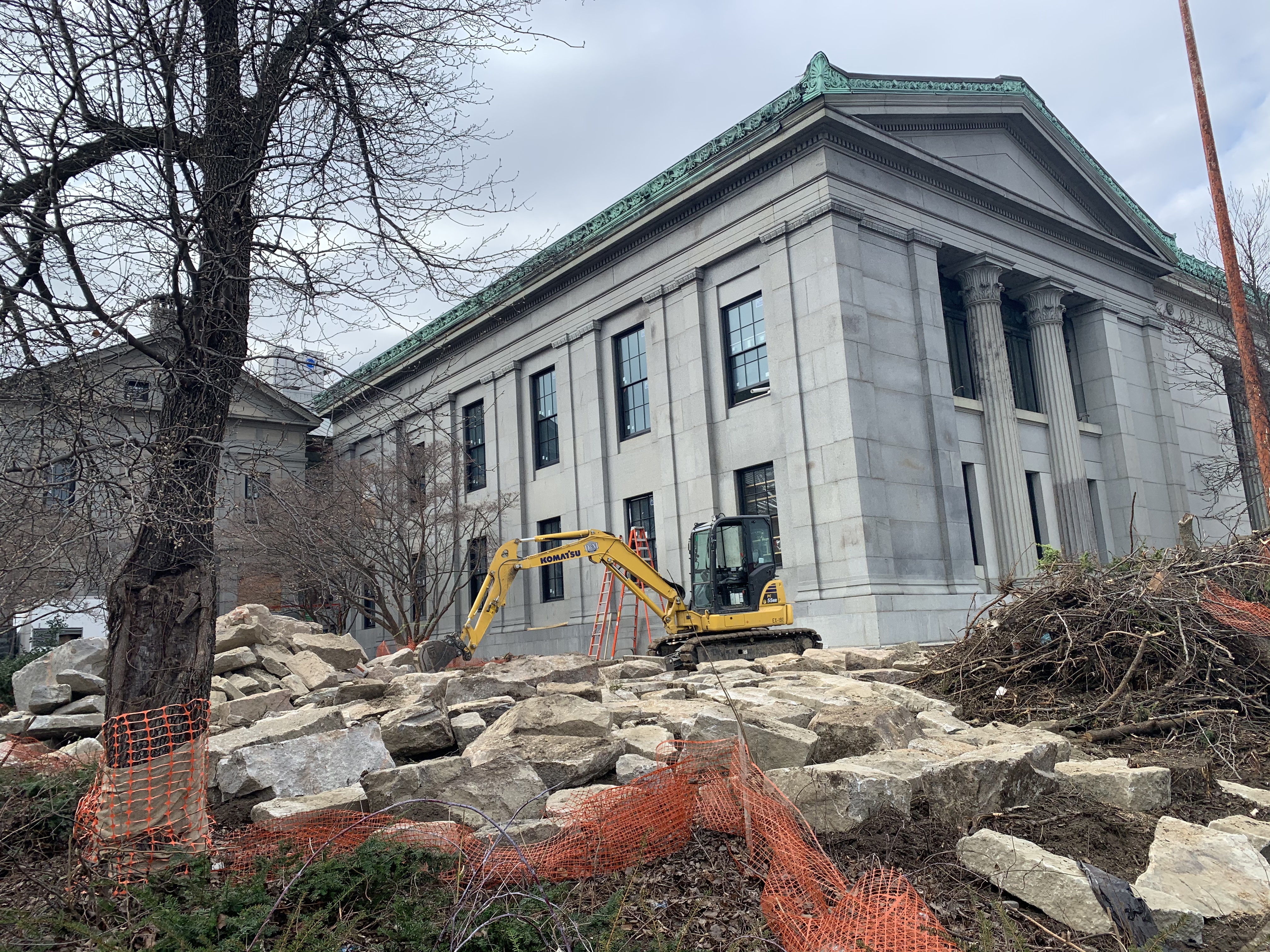 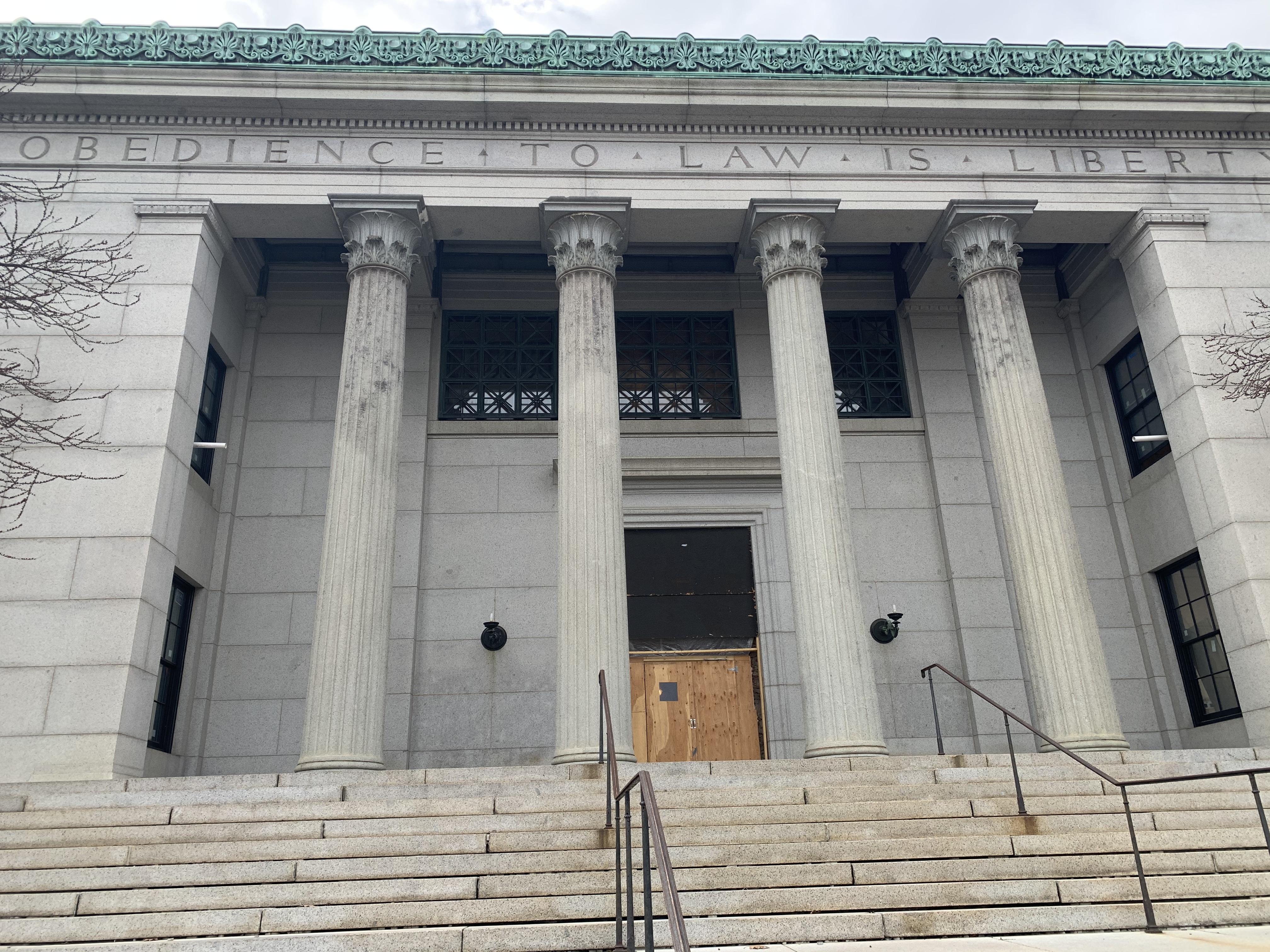 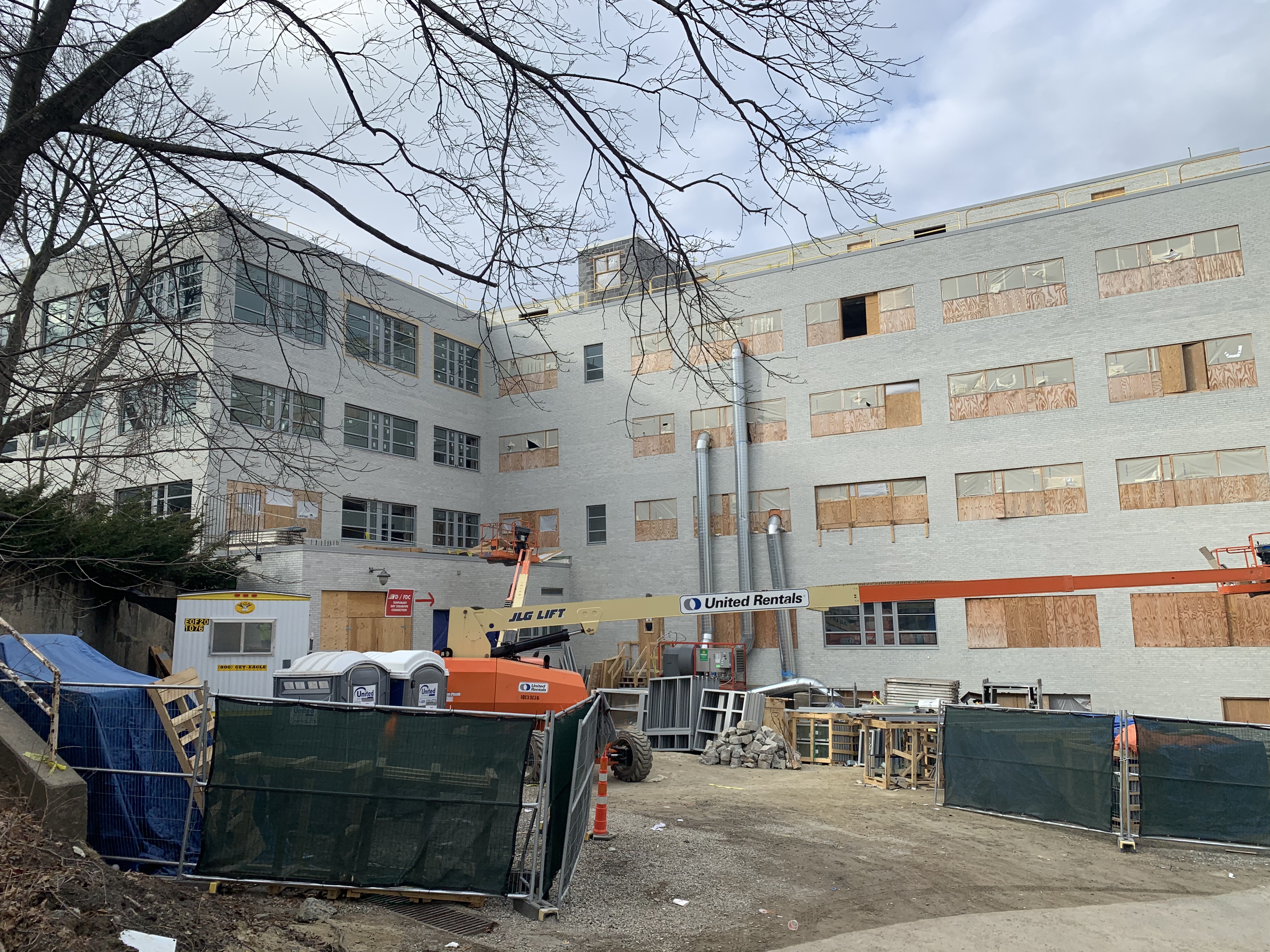 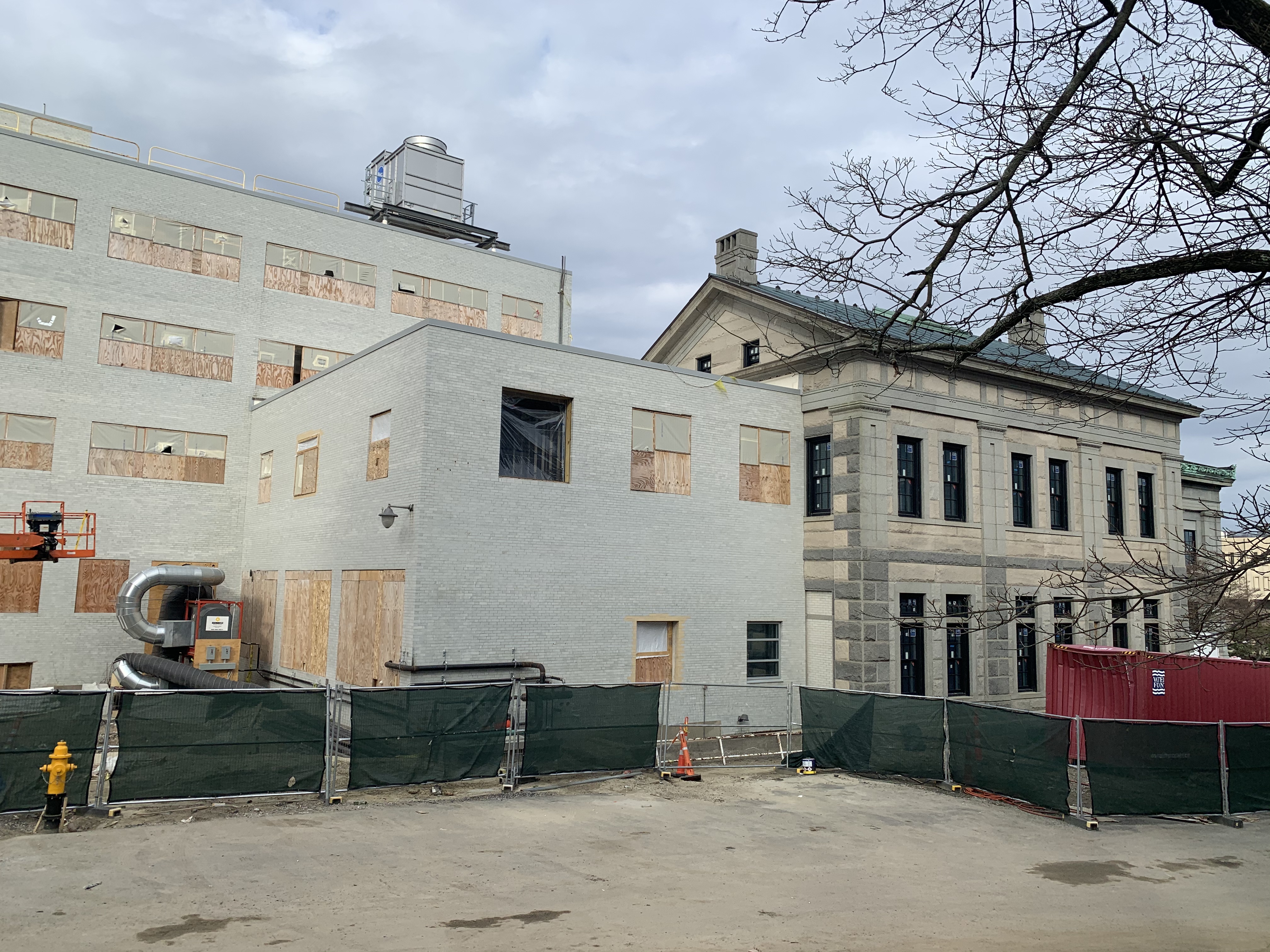 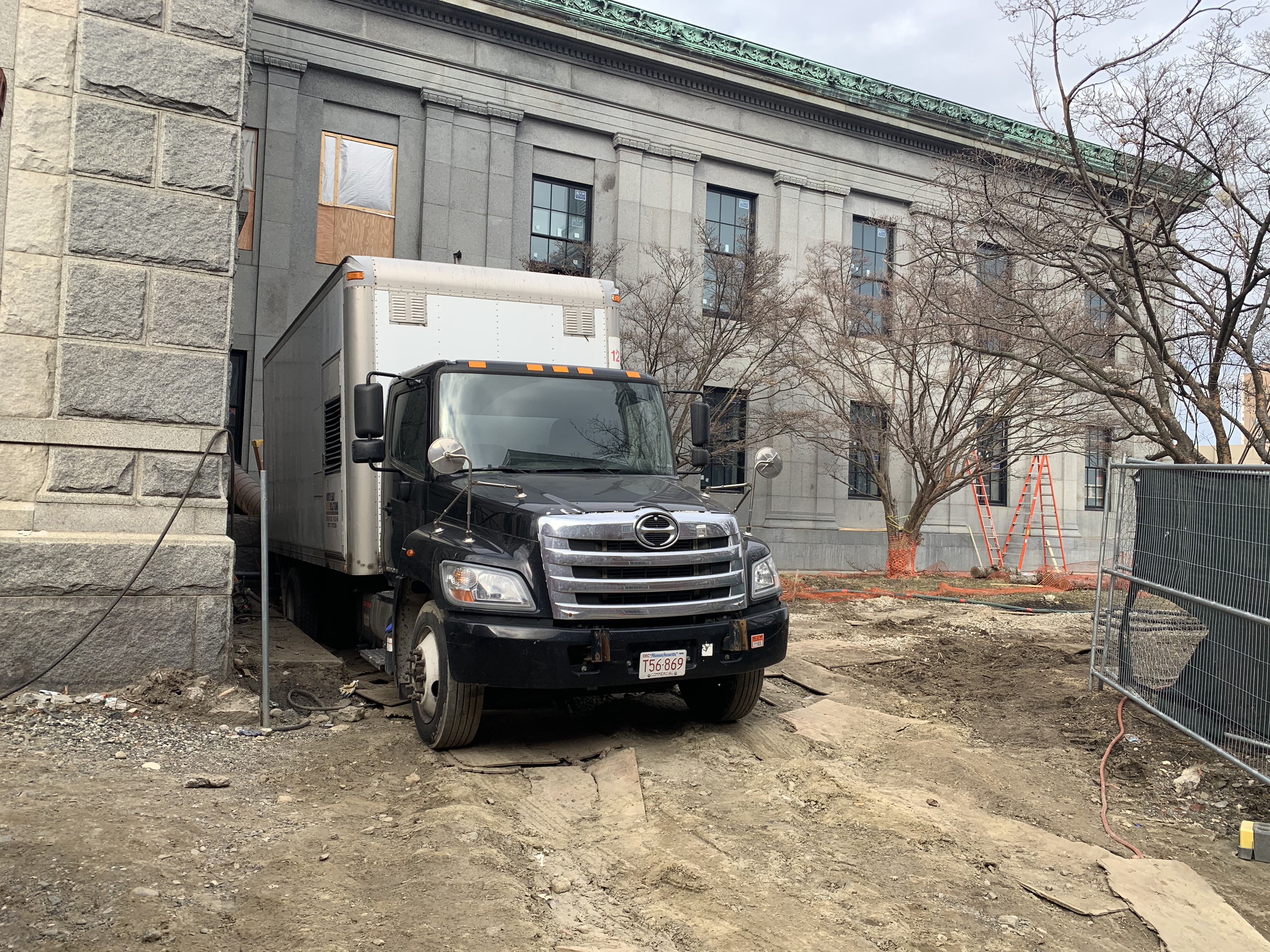 This problem child, the old Worcester Vocational School, is still looking for a savior after a deal fell apart last year. Seems like time is running out: 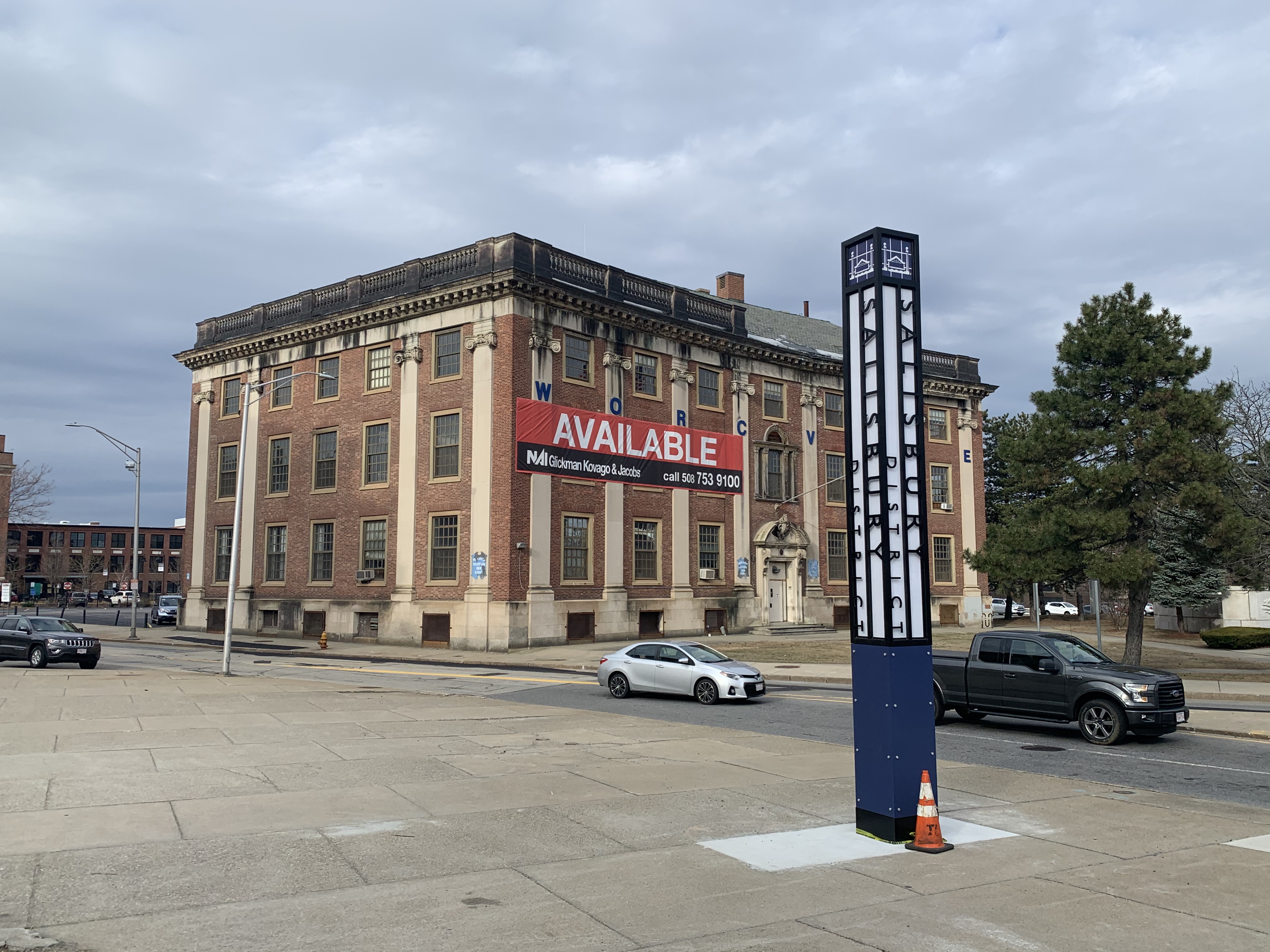 Lastly, as Wormtownnative reported above, this old factory on Prescott Street has been bought by the “Grid” developer for $1.1M and will likely be converted into biotech lab space. The developer of Worcester's Grid District has bought a Prescott Street building that went to auction in December. 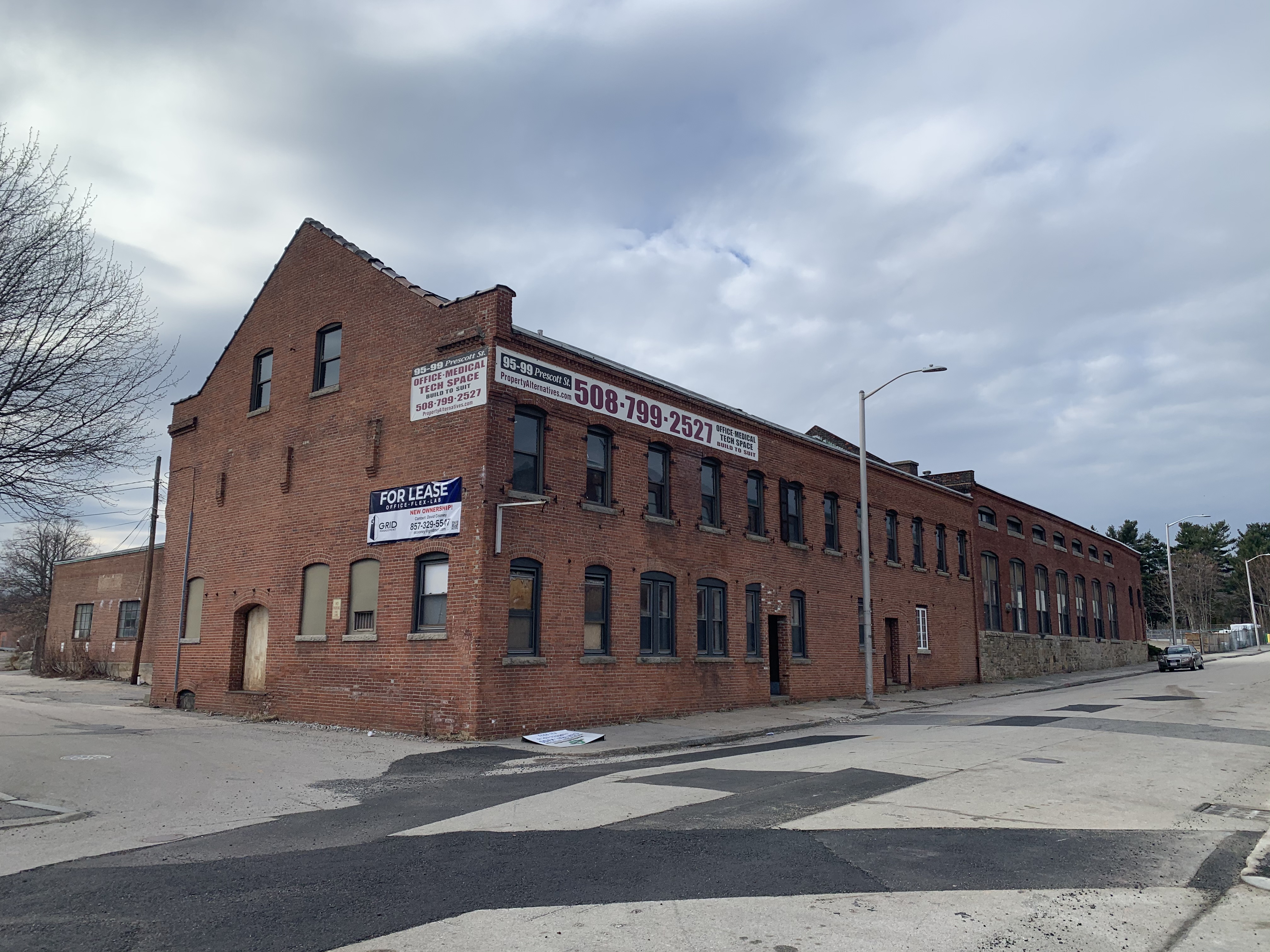 Didn't realize it until you posted the picture of 90 Prescott cubalibre, but I briefly worked there a few years back. My roommates ran Neuron Robotics and a makerspace out of there. Since the makerspace was nonprofit, they had a nice deal with the landlord which let them have the space rent free as long as they maintained it. I always figured that WPI would buy it eventually to expand the nearby Gateway Park campus. 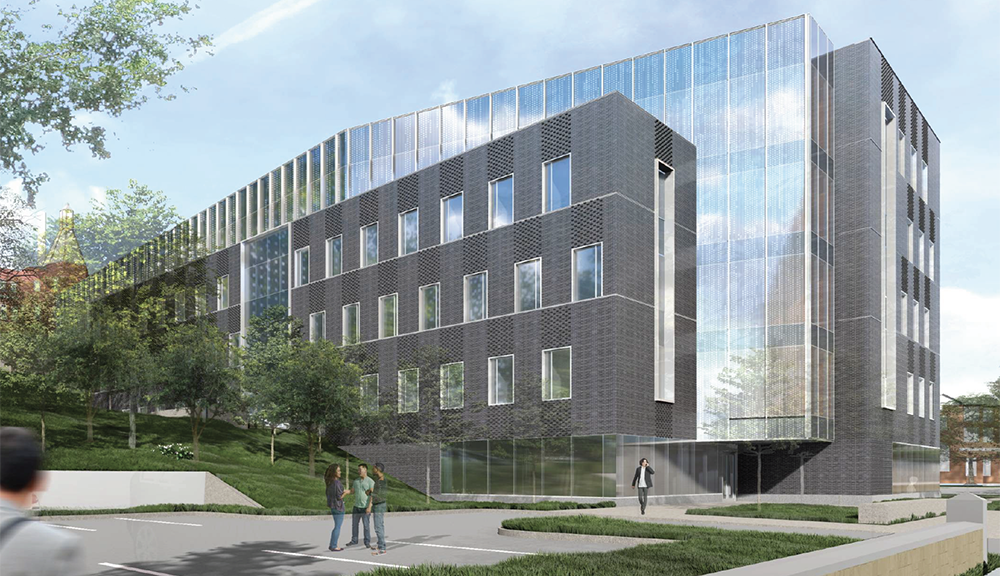 Today, Worcester Polytechnic Institute (WPI) officials and donors broke ground on a new academic and research facility, taking an essential step as the university commits to leading the Fourth Industrial Revolution and preparing its graduates for long-term success in jobs that do not yet exist.

Swung by the site today (among a couple of others), it's really taking a deep chunk out of the hill. 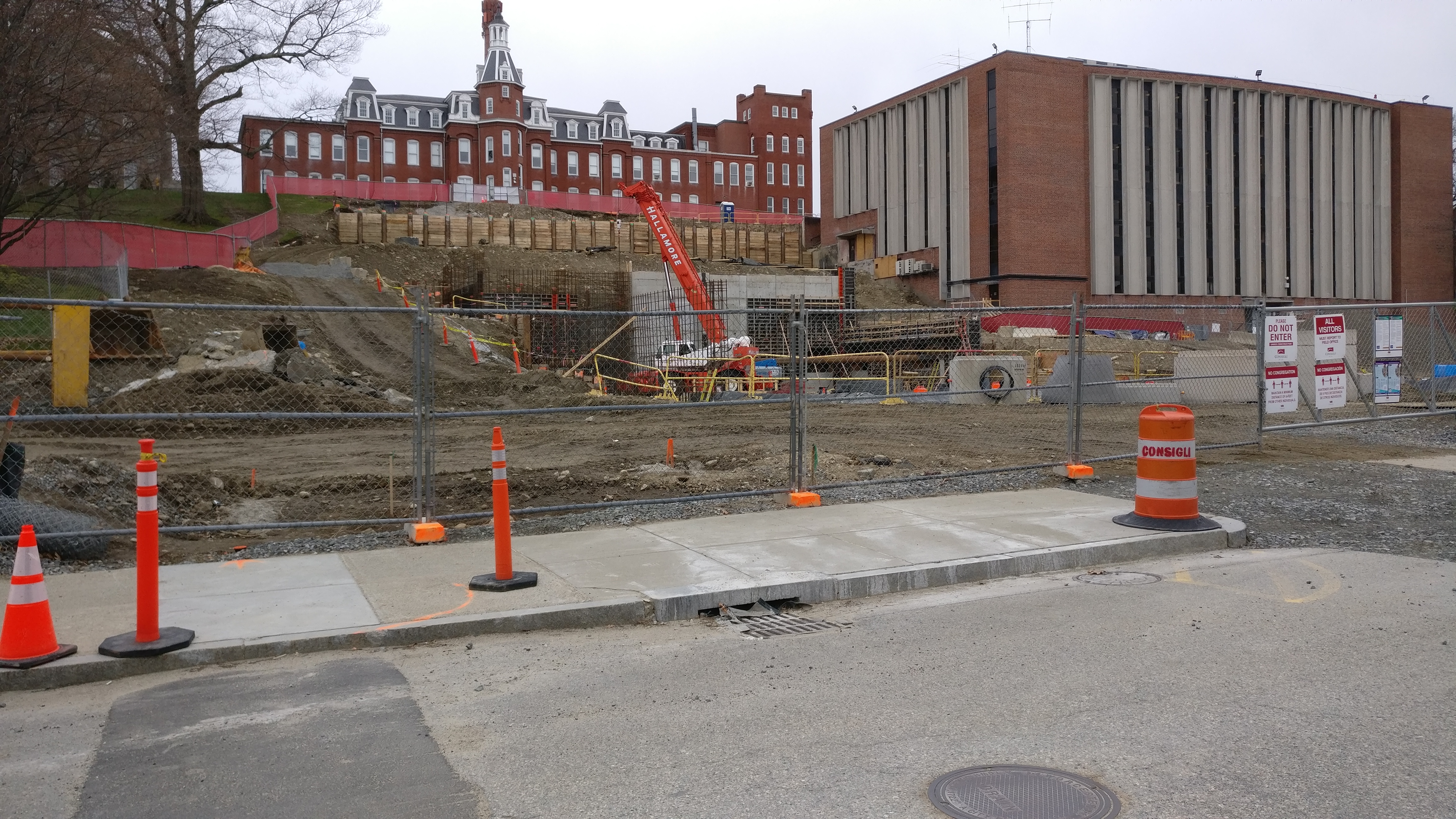 First, the project to build condo's on the site of the infamous El Morocco is progressing nicely. Makes quite an impression going up Franklin Street. 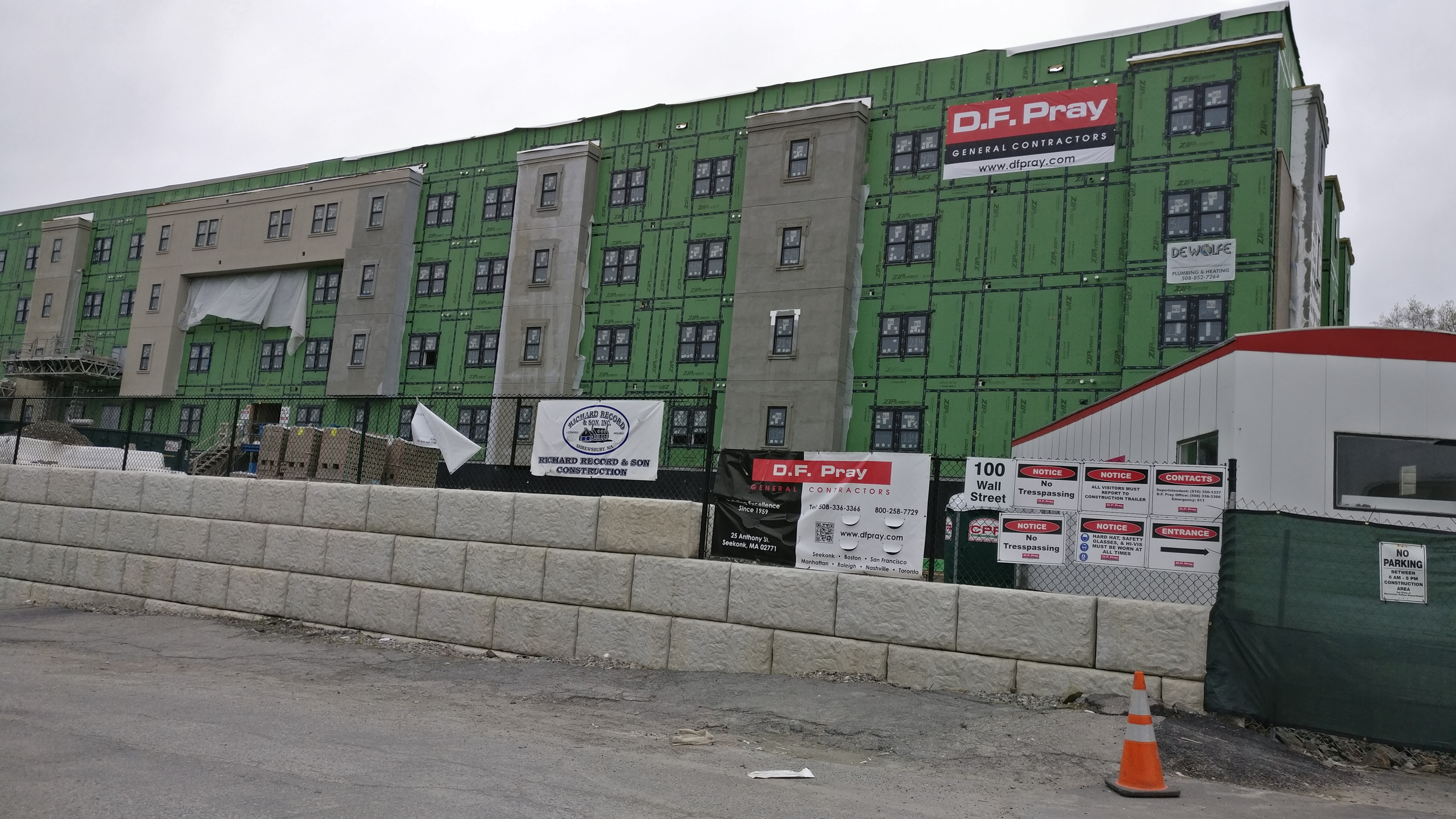 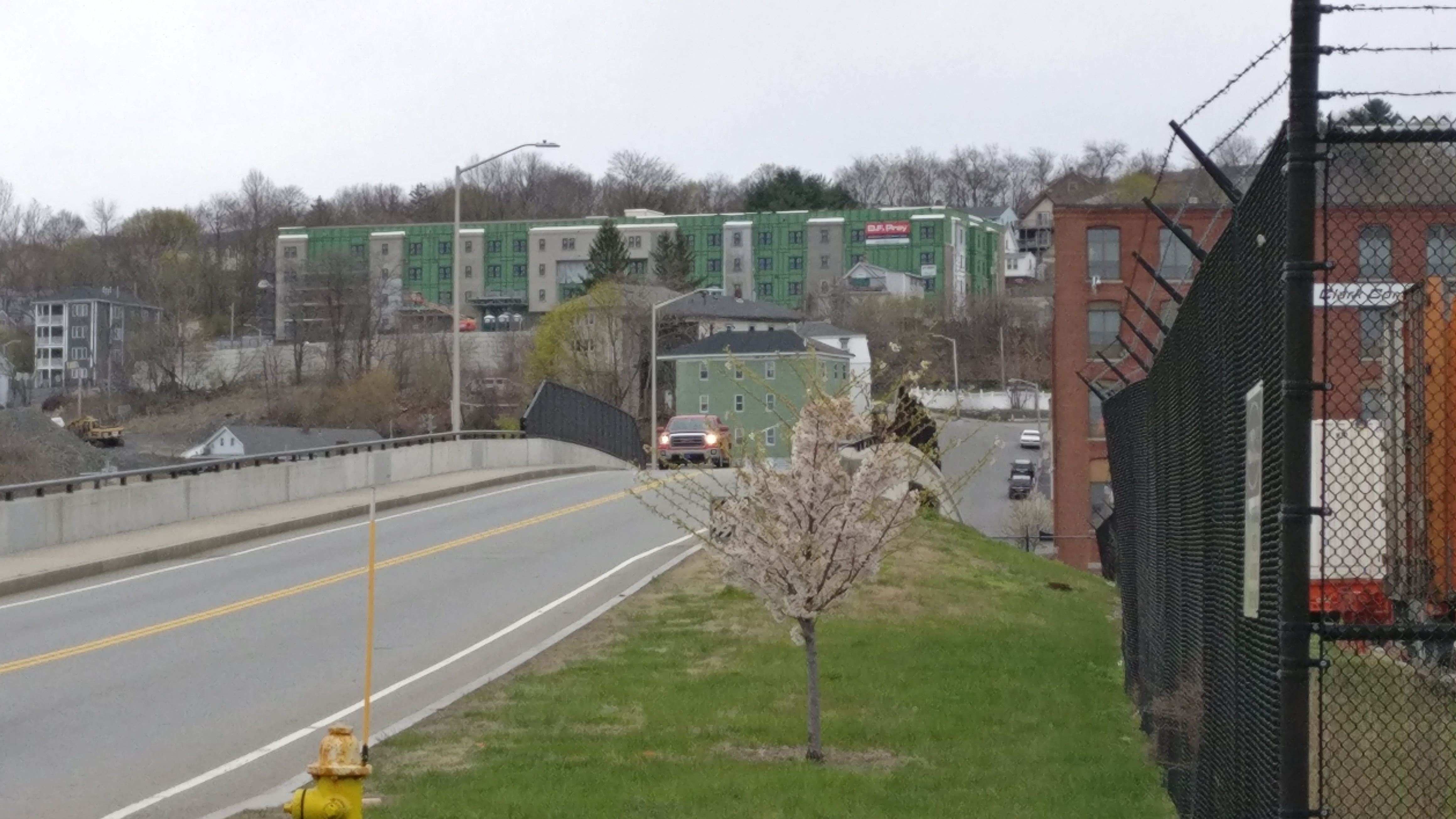 Second, totally missed this, but the vacant garage on the corner of Chestnut & Pleasant got demolished sometime last year & site has been marked as for sale. 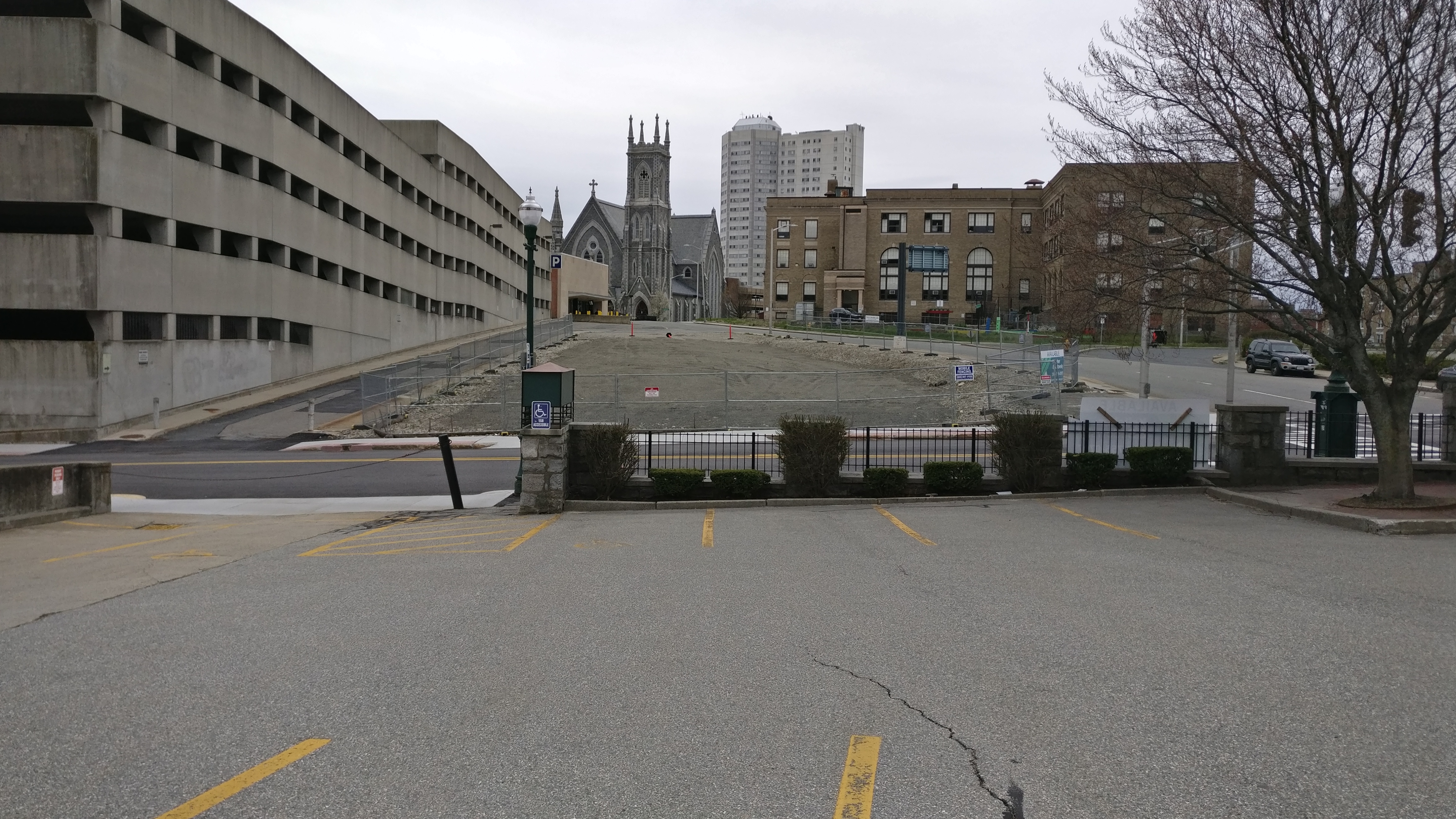 The former Shack's building downtown unfortunately doesn't look like it has had any additional work done to it. No dumpsters or evidence of any construction around at all. 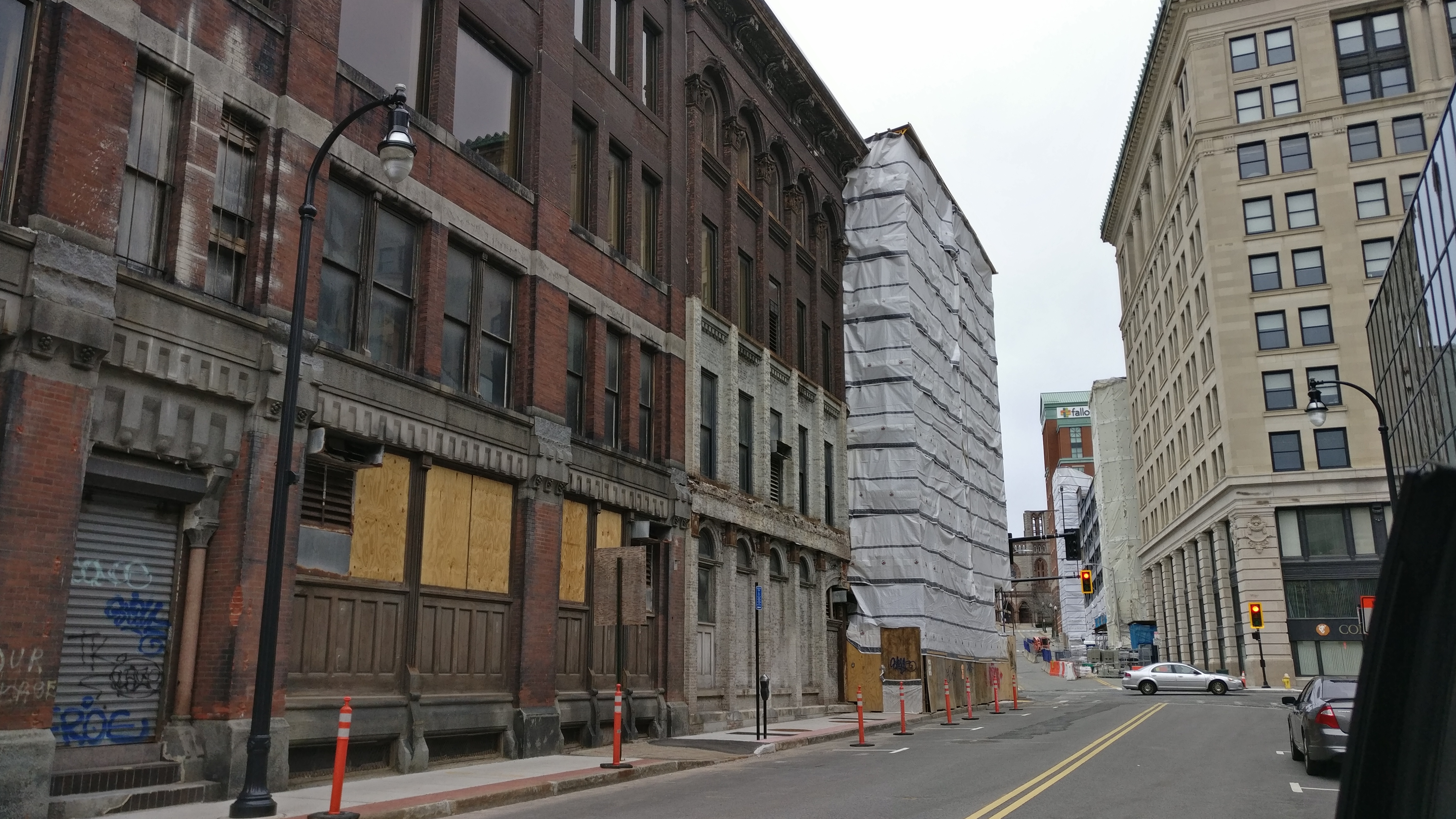 Lastly, didn't want to go onto Holy Cross's campus, but the new field house is coming along nicely. 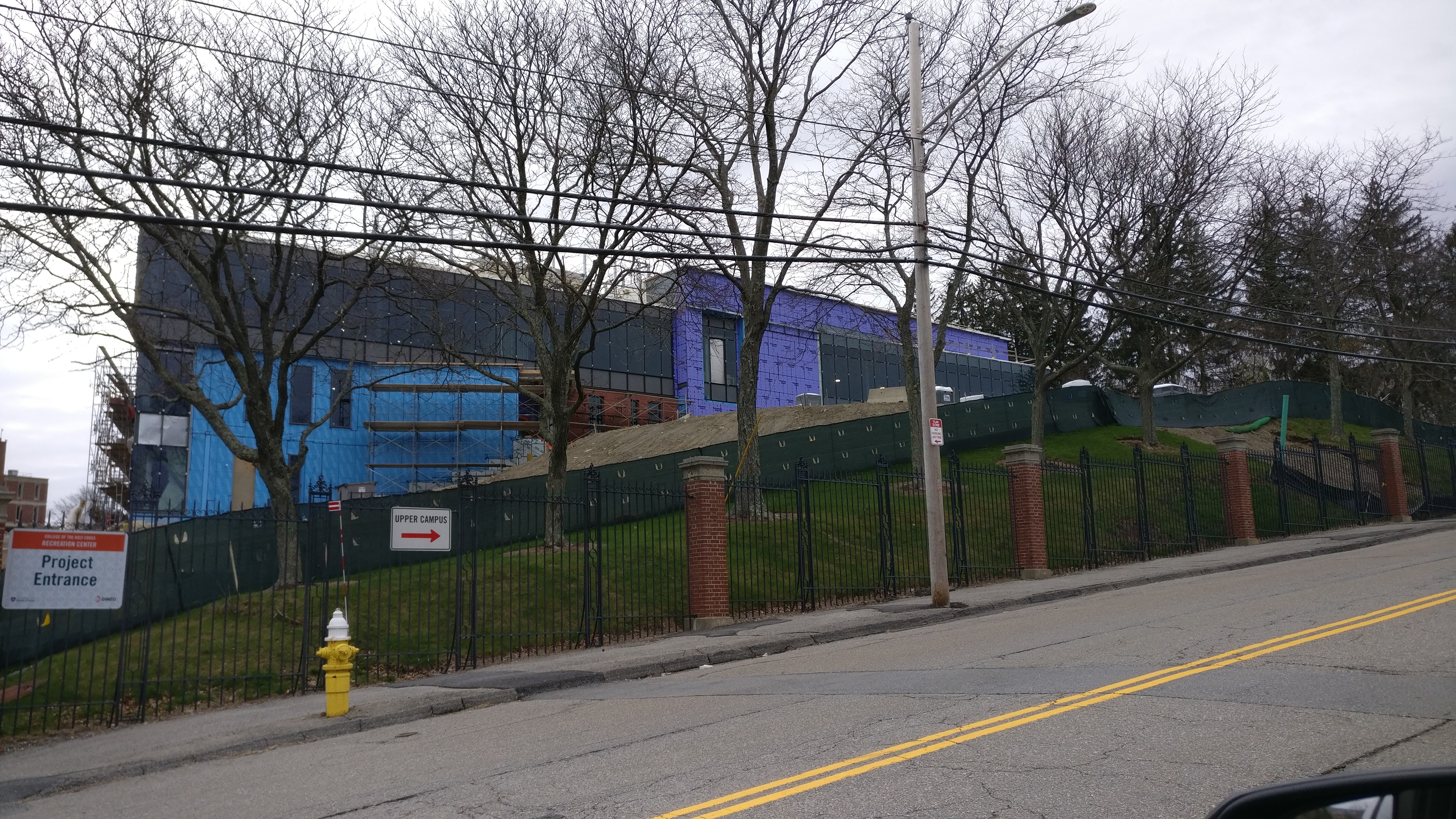 WormtownNative said:
Swung by the site today (among a couple of others), it's really taking a deep chunk out of the hill.

RIP to the worst stairs in history, right next to the library. The run was too long for the rise, so the only way to get up them quick was to double them, which left you out of breath for your 8AM fluid dynamics class. The pitfalls of living in Founders.
S

Yeah, those stairs were a pain. The students are going to love having an indoor path to get up the hill in the winter, that's for sure.
As an aside, it doesn't actually look like they've dug much out of the hill; that section was already dug out for the parking lot.
F

Yeah, those stairs were a pain. The students are going to love having an indoor path to get up the hill in the winter, that's for sure.
Click to expand...

I never lived on that side of campus, but I did take advantage of that hill for sledding many, many times. Hopefully that use won't be precluded by this construction.
S

Oh, they're not touching the part of the hill we used for sledding
C

MassLive is contemplating the future of the “Worcester Renaissance”. The upswing in the local economy was largely built on small hospitality businesses and sustained in part by the 36,000 university students which left town and may not return this fall.
Polar Park, the other cornerstone in the plan, relies on thousands of people congregating for sporting events.

MassDOT is finishing up a new $35 million district headquarter on Plantation Street: 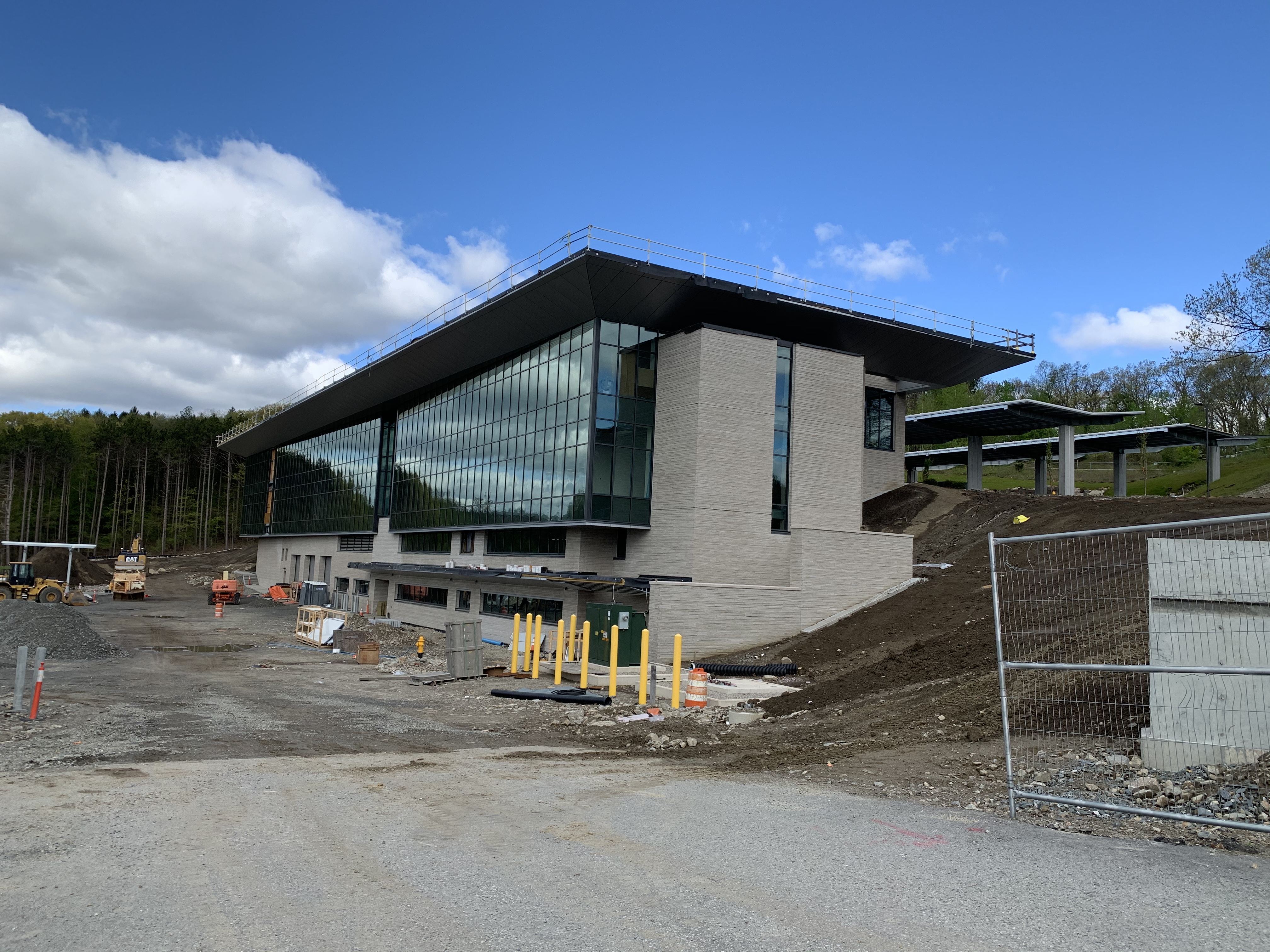 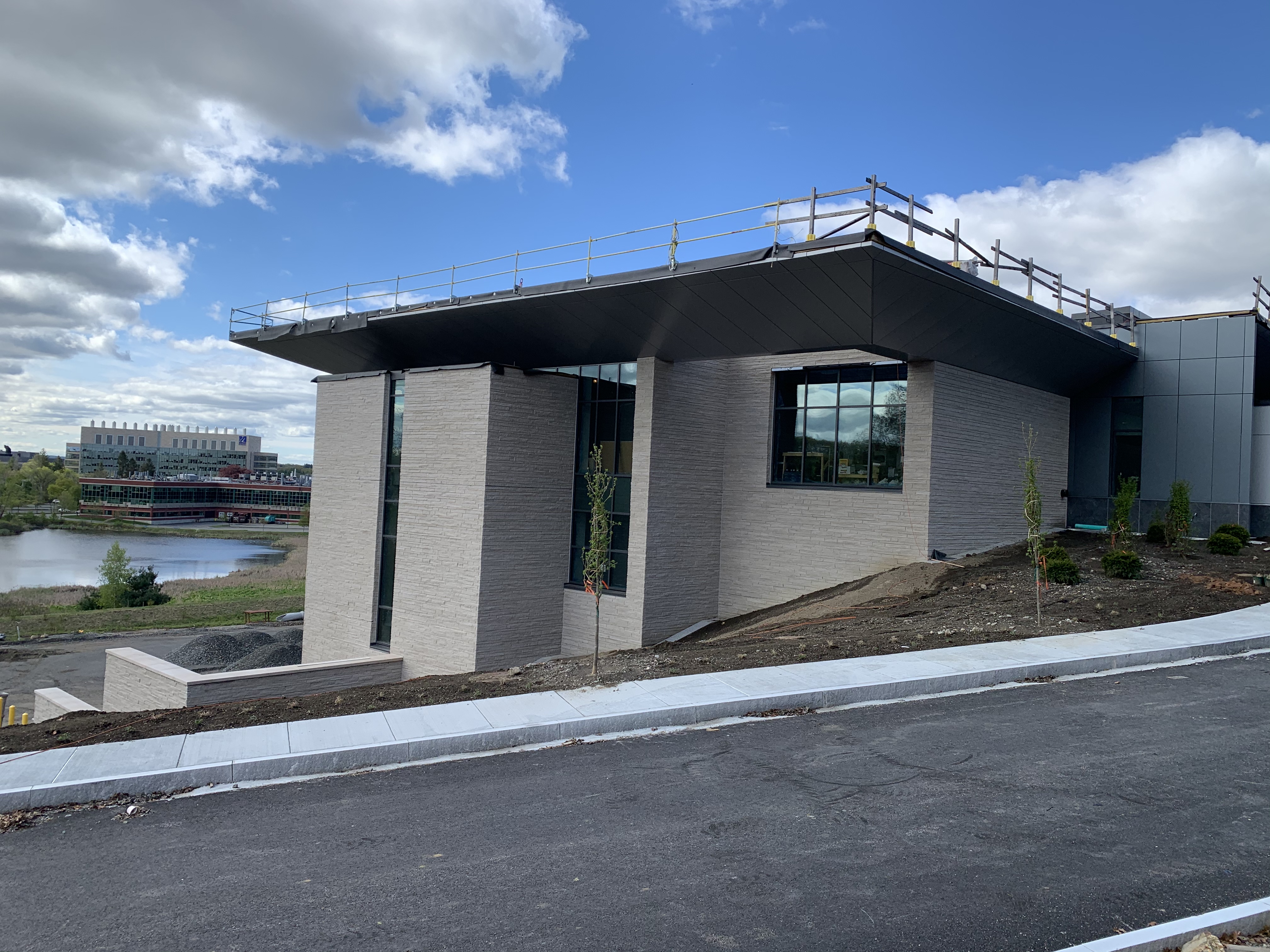 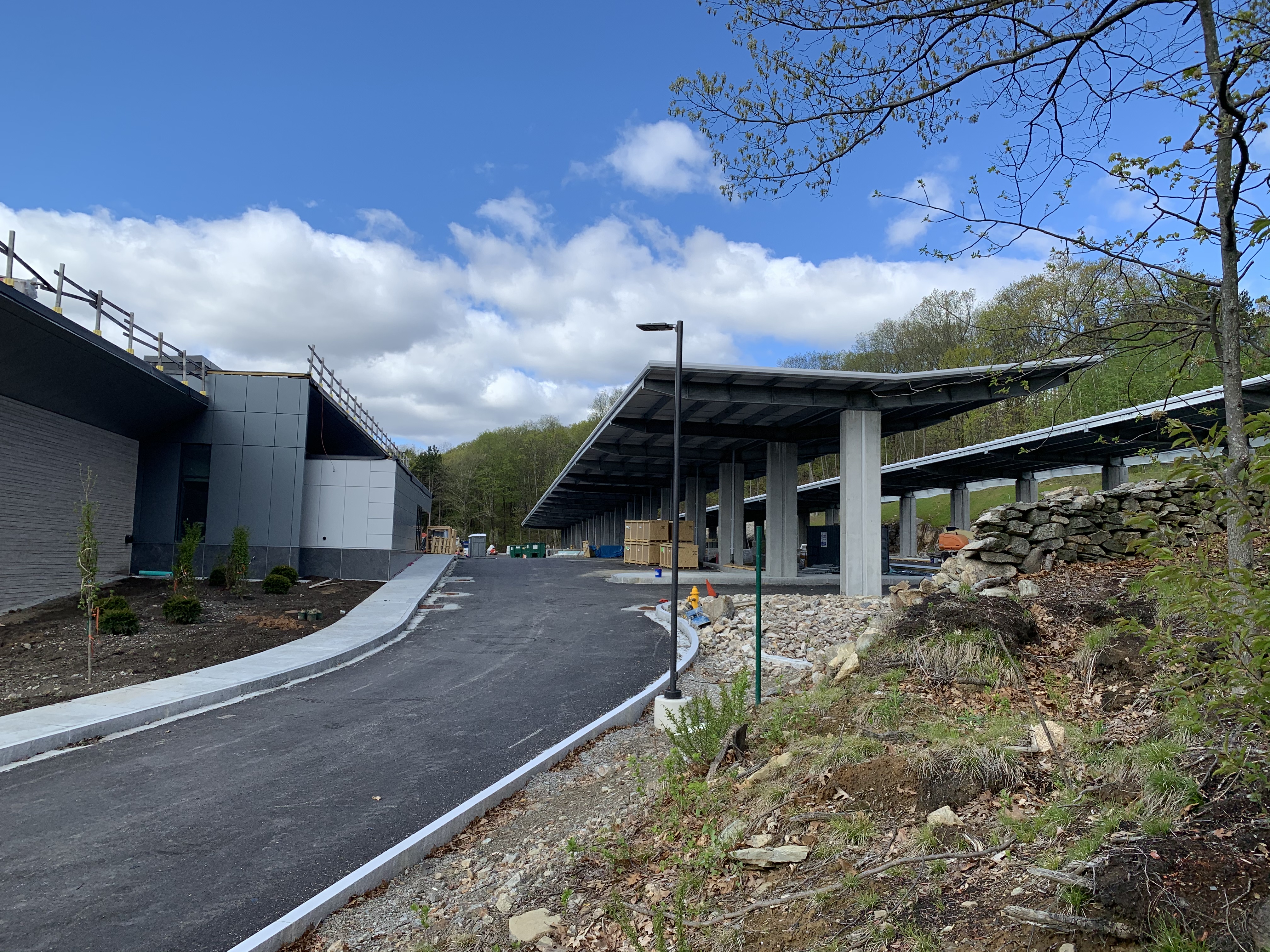