U.S. Sen. John F. Kerry is taking aim at the Acela bullet train, saying the 8-year-old line meant to zip passengers between Boston and Washington is riddled with speed and safety issues that have thrown its swift mission off track.

?Are you kidding? That train can go 150 miles an hour, (but) it goes that for, what, a couple of miles?? Kerry scoffed. ?I want America to have a first-rate high-speed rail system. A high-speed rail that really lives up to the name and gets people there in the time that we ought to be aiming for.?

Kerry plans to file in two weeks a $1 billion bill that will target out-of-date bridges, tunnels and tracks that prevent the train from hitting its 150-mile-per-hour maximum and getting commuters to their destinations faster.

?The point is, it could be significantly shorter,? Kerry said of the commute between Boston, New York and Washington, D.C. Currently the Acela train takes about 3 hours to get to New York, while a bus ride takes about four hours.

The train only hits its top speed of 150 miles an hour for about 18 miles in Massachusetts and Providence.

?You know why it can?t go 150 under Baltimore? Because it shakes the tunnel and it?s unsafe for the city. You can?t go over the bridges because they?re unsafe because we haven?t rebuilt them for high speed,? Kerry said in a meeting with Herald reporters and editors.

Frank Hornig, a New York resident hopping on the 3:15 p.m. Acela in Boston yesterday, said, ?It?s too slow. From here to New York should take two hours or less.?

Hornig, who said he?s ridden high-speed trains in Germany that put the Acela to shame, added, ?They really should invest more in the public transportation system here.?

While Amtrak took in more than $1.4 billion in federal funds last year, the curvature of the railroad tracks continues to be the main reason for the Acela?s low speed in the northeast, said Amtrak spokeswoman Karina Romero.

Straightening the tracks along the heavily developed eastern rail would trigger many eminent domain takings, however.

?The price would probably be exorbitant,? Romero said about the number of land takings.

Modernizing bridges and other infrastructure may increase the speed by 10 to 15 miles an hour, said Romero, but probably still would not bring the line to top speed, despite Kerry?s remarks.

Kerry?s bill would give power to either a state or a compact of states to improve the rails, so decisions on eminent domain would be made at the state or local level.

Kerry said his bill targeting the portions of the out-of-date Acela line could make the rail competitive with high-speed trains around the world.

?We could really compete in a major way and draw a lot more ridership if we were able to get the capital investment in place,? Kerry said. ?You can go to Shanghai and ride a Maglev (train) that goes from the airport to downtown in 12 minutes.?
Article URL: http://www.bostonherald.com/news/national/politics/general/view.bg?articleid=1107096
Click to expand...

Kerry wants to be able to sleep in, I'm guessing.

?You can go to Shanghai and ride a Maglev (train) that goes from the airport to downtown in 12 minutes.?
Click to expand...

This quote is meaningless without context.

"You can go to Boston and ride the Blue Line that goes from the airport to downtown in 12 minutes."

The idea that eminent domain won't work here is just a way to dissuade politicians from doing what is really necessary. Highways? No problem! Rail, whoa! We can't take (less land than needed for roads) for trains.

We are still stuck in a 20th Century, auto-centric world.
R

But when is the last time we took lots of land by eminent domain for highways? Some time in the early 1970s? (Little parcel-by-parcel takings, like a couple buildings demolished for the Big Dig, don't really count.)
U

While I agree with Kerry that it's idiotic that we built trains that can go 150 on tracks that can only handle 60, is the speed factor really what's keeping people from riding the Acela? It's already quicker between Boston and New York than the bus or the plane. Clearly speed isn't the issue that's causing the numbers to skew towards the bus or the plane. Maybe it would be better to spend his billion on subsidizing rail travel like we do other travel so that the tickets would be more in line with what consumers are paying to the Lucky Star... or at least what they're paying to Delta et al?

Delta, et al will probably have a hard time keeping up with Acela price-wise if oil prices continue to climb.
C

What's amazing is that even with Acela tickets as expensive as they are, they are selling out on many runs. The few times a year I travel to NYC, I pay the premium to travel by Acela over bus or even the regional trains. It's just that much nicer of an experience (and a bit faster).
A

I don't know...I find the Acela frustratingly slow, and unless I'm going somewhere in Manhattan that is an easy subway ride from Penn Station, I don't consider riding it.

I guess the bigger gripe is the local train that isn't designed for 100+ runs and makes several additional stops, only takes 30 minutes longer and cost 40% less.

I'd support spending the money, but not if it only would increase the speeds by 10-15 mph like the Amtrak spokesperson claimed.
C

I rode the Acela from New York this past Sunday and we had to wait for an hour in CT because of a broken train on the tracks in front of us. A little while later, we slowed down while another train passed us, which I presume was the metroliner that left NYC after the Acela. Frustrating to say the least. The trip from New York took 5:05 hours. Stupid train.
B

Riding the train once and experiencing delays is nat a valid reason to writr off rail service from Boston to New York.
That logic would have hundreds of thousands of drivers selling their SUV'S any time an accident closed the Expressway.
Do you want to write off a travel option? How about Laguardia on a summer afternoon of thundershowers!
D

Once older bridges are replaced, and new catenary constructed on the New Haven railroad, maybe 15 minutes can be cut from the schedule, but I don't expect much more than that. There are just too many curves in Connecticut, with no political will to speed up travel for the benefit of New Yorkers or Bostonians. Metro-North's problem is capacity, not speed.

In my dreams, I route the Acela down the Ronkonkoma branch of the Long Island railroad, and then in a tunnel from Greenport, LI to Westerly, RI. But it ain't going to happen.

I take the train (regional; Acela's not worth the extra money IMO) back and forth to NYC probably a dozen times a year, and while you'll occasionally have some rediculously long delay, 90% of the time it's right on schedule. Other routes aren't as good (Bos-Alb has a maybe 20% on time record), but I've found that the Bos-NY run is quite reliable.

And yes, they will at times hold up your train to let another pass; that's what happens when Amtrak owns next to none of the track they operate on.
J

underground said:
While I agree with Kerry that it's idiotic that we built trains that can go 150 on tracks that can only handle 60, is the speed factor really what's keeping people from riding the Acela?
Click to expand...

Id say capacity is, since apparently many trains sell out. Which is unfortunate for those of us not on business trips who cant afford 100$ each way.

Its time for double-decker trains, which can only run when the oldest of bridges over the tracks are removed.
R

MBTA runs double-deckers from Boston to Providence. Do any of the other commuter agencies (Metro-North, NJTransit, SEPTA, MARC) run double-deckers on their sections of the Northeast Corridor? Which bridges are in the way?
A 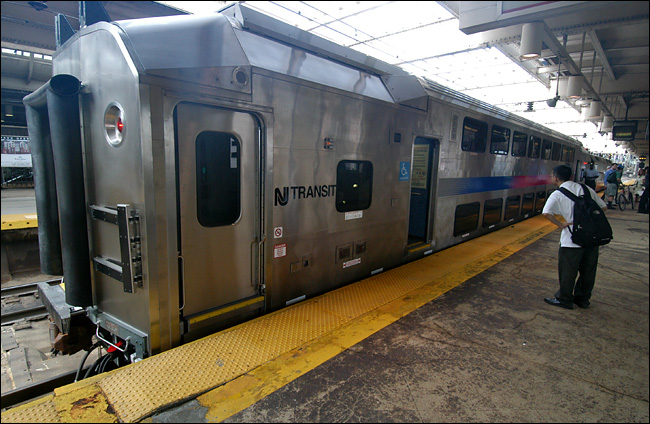 Here's a double-decker MARC train on the NE corridor.
C

BostonBoy said:
Riding the train once and experiencing delays is nat a valid reason to writr off rail service from Boston to New York.
That logic would have hundreds of thousands of drivers selling their SUV'S any time an accident closed the Expressway.
Do you want to write off a travel option? How about Laguardia on a summer afternoon of thundershowers!
Click to expand...

Whoa, BB, you're jumping to conclusions. I'm not writing off rail service from Boston to New York. The train is my preferred method of getting between NYC and Boston. But my five plus hour ride the other day is indicative of the problems that make Acela service such a poor excuse for high speed rail. Most of the Acela runs are only 25 minutes faster than the regional. The primary reason I'll choose the Acela is the cars are a bit nicer, not the speed.

The TGV in France routinely travels at close to 200mph, and in 2007 it topped out at around 340mph. We're a good 25 years behind them. I'm sure Amtrak could come up with a litany of reasons why we can't have an equivalent train, but it boils down to this: the French are capable of building great trains, and we are not. The Acela is a stupid train.
C

^NJ Transit trains are sweet. They're so quiet and smooth, generally clean, and though I've only ridden on them about ten times, I don't recall one ever being even a minute late. The house my wife grew up in has a line running past the backyard, and you can't even hear the train passing from inside the house.
S

Kerry is way off the mark. $1 billion won't speed up trains significantly; try more like $5 to 10 billion to do that.

Between BOS and NYC, using the existing right of way, the major reason for slow speeds is that AMTRAK runs on tracks between New Haven and New Rochelle that are owned and maintained by Metro North. The state of Connecticut is stingy with money to upgrade this track so the very old catenary is being replaced at a snail's pace; bridge replacements have been taking two or more years to complete (these are small bridges over streets); Metro North runs a lot of trains and quite often one of the four tracks on this route is out of service because of trackwork.

Metro North restricts train speeds on its track, and because of close clearances, will not allow the Acela to use its tilt mechanism.

That said, work is nearly complete on a redesigned track configuration at New Rochelle to allow AMTRAK trains to move more quickly through the junction there, and AMTRAK is replacing the old catenary between New Rochelle and Penn Station. AMTRAK has finished installing the new bridge at New London CT, which was their highest priority because it was so old and frail.

Between Providence and New Haven, it would help if CT eliminated at grade rail crossings, or most of them anyway.

I doubt you could ever get a train to travel between BOS (South Station) and NYC under 3 hours 10 minutes without spending big money on the Metro North track, and Metro North equipment.

The real big money would and could be spent between NYC and Washington.

The other thing that could be done is to lift the restriction on the number of trains AMTRAK is allowed to run between NYC and BOS. The restriction was insisted on by Connecticut yachtsman who wanted the bridges to remain open, except when a train was approaching. They diudn't want too many trains interfering with their freedom to navigate.
You must log in or register to reply here.
Share:
Facebook Twitter Reddit Pinterest Tumblr WhatsApp Email Link