Biddeford/Saco strikes me as the most exciting urban area in Maine outside of Portland. I attribute that sentiment mostly to the layout of the mils, the downtown train station, previously announced projects like the Pearl Street Riverfront District (!), higher density neighborhood development around the core, overall walkability, and proximity to amenities like the coast, parks and Eastern Trail. The Press Herald featured a story today about South Street Village, a potential mixed-use "traditional New England-style village" that could feature several hundred units of housing. The housing could take the shape of, "a mix of single-family, duplexes and multiplex structures with three or more units." The developers stated a desire to create a walkable space which would be easy enough inside SSV but connecting it to the rest of Biddeford seems challenging given its location. Similarly, they want to forge connections to transit, which is great but I imagine that would also be challenging.

This project is still early in the process. Required zoning changes have not been approved. If it does move forward, it seems like it could be a real positive for the area if the development is integrated into the city in a way that allows people to access downtown Biddeford/Saco by bike, transit, and, for those who enjoy a longer walk, on foot. 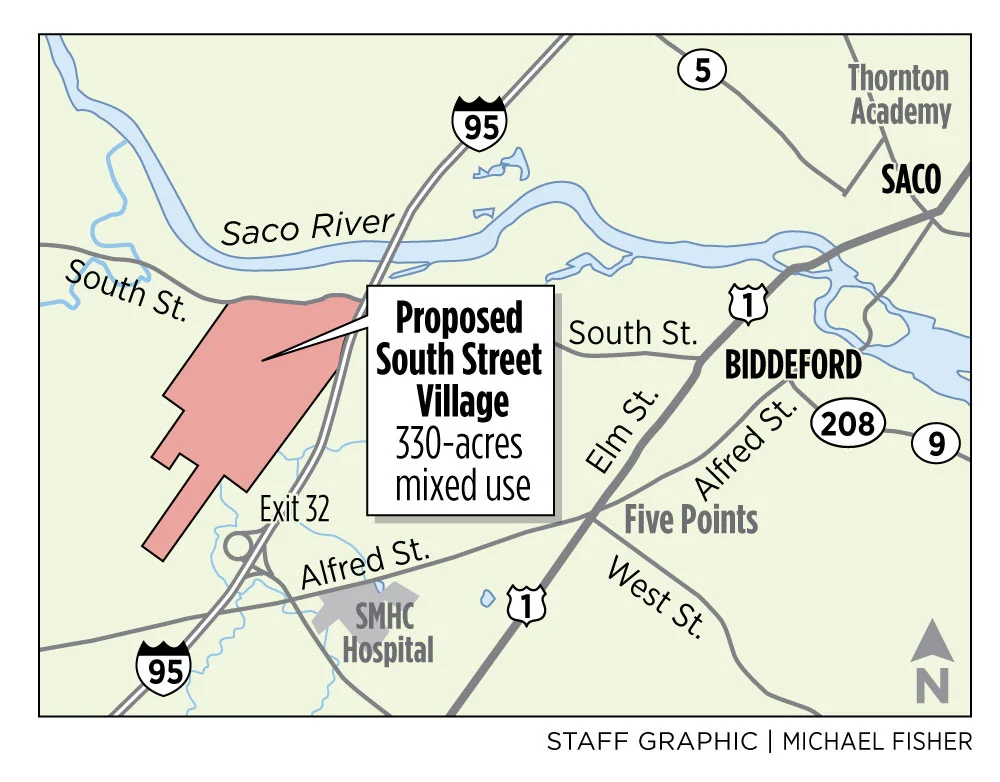 Article in the PPH about plans for 100 market rate apartments in a derelict mill building. In addition to potentially expanding the River Walk and adding more units within walking distance of the Downeaster, this a prominent building in noticeable need of repair.

Also from the article, the head of planning and development in Biddeford estimates,

“Biddeford developers have most recently added 50 units to the city’s housing inventory; 200 more are under construction, and 250 more are proposed” In a 5-4 vote, the Biddeford City Council approved moving forward, and will conduct another vote once a Joint Development Agreement is ready.

Nice. All of it. I grew up in Saco. This building has been such an eyesore over the years that we have become indifferent to it. And with a pedestrian bridge over the water to the Downeaster (planned), not a bad place to live. It would then be an easy, comfortable 2 hour commute to Boston (or 20 minutes to Portland). Boston is now (or soon will be) the most important city in the world for education and technology (combined). Amazon, Google, Boeing, numerous drug companies, are all placing their highest level talent in Boston. (Boeing and Google are now directly across the street from M.I.T.) And some that work in Boston could, conceivably, live in Saco or Biddeford. Saco's proximity to Boston is also a reason why Thornton Academy can attract so many foreign students (nearly 200). The parents want them to get into elite colleges in Boston, of which, is that easy 2 hour commute away by train, a method of transportation most of them are already familiar with. I was on the Downeaster last year seated near a dozen Asian kids wearing Thornton jerseys. Harvard and M.I.T. is where they want to attend college.
Last edited: Nov 3, 2020
T

Three design concepts for the Park at Pearl St. are posted at https://biddefordmaine.org/pearlstreetpark. As @TC_zoid mentions above, they all feature a bridge spanning the Saco River that will provide a connection to the train station. This project will also expand the RiverWalk. Quite the win for connectivity! All the options are nice. A survey is open until 11/13 allowing people to rank their preferences and comment on the concepts.
B

Tom Nevers said:
Article in the PPH about plans for 100 market rate apartments in a derelict mill building. In addition to potentially expanding the River Walk and adding more units within walking distance of the Downeaster, this a prominent building in noticeable need of repair.

Also from the article, the head of planning and development in Biddeford estimates,

“Biddeford developers have most recently added 50 units to the city’s housing inventory; 200 more are under construction, and 250 more are proposed”

In a 5-4 vote, the Biddeford City Council approved moving forward, and will conduct another vote once a Joint Development Agreement is ready.

I just googled this development and can you help me to understand something.

Why were there 4 members of the city government AGAINST this proposal?
T

bolehboleh said:
I just googled this development and can you help me to understand something.

Why were there 4 members of the city government AGAINST this proposal?
Click to expand...

The article provides the following information about one councilor's decision to not vote in favor of the credit enhancement agreement,

“This has nothing to do with the developer, and God bless him, I hope it thrives, but I’m not … supporting using city tax dollars for market rate apartments being developed. We have other pressing priorities.”

As described in the article,

It appears some councilors were concerned this was not prudent use of public dollars, especially given that the units created would not be "affordable". A counter argument, as noted in the same article is that "even with a credit enhancement agreement in place, the city would receive considerably more in property tax than it does now."
T

The renderings accompanying the article are basic but the proposal is a nice infill project that would transform a strip-style shopping center into a combination of commercial spaces and 150 apartment and condominium units. On an adjacent undeveloped parcel,128 "garden apartments" in four, four-story buildings would be constructed.

I like it and hope we see more proposals to redevelop in-town shopping centers into mixed use sites. An upgraded retail plaza with high rise apartments in the midsection, an entertainment center, and garden apartments nearby are part of contract zone request.

Layout renders from the Press Herald: 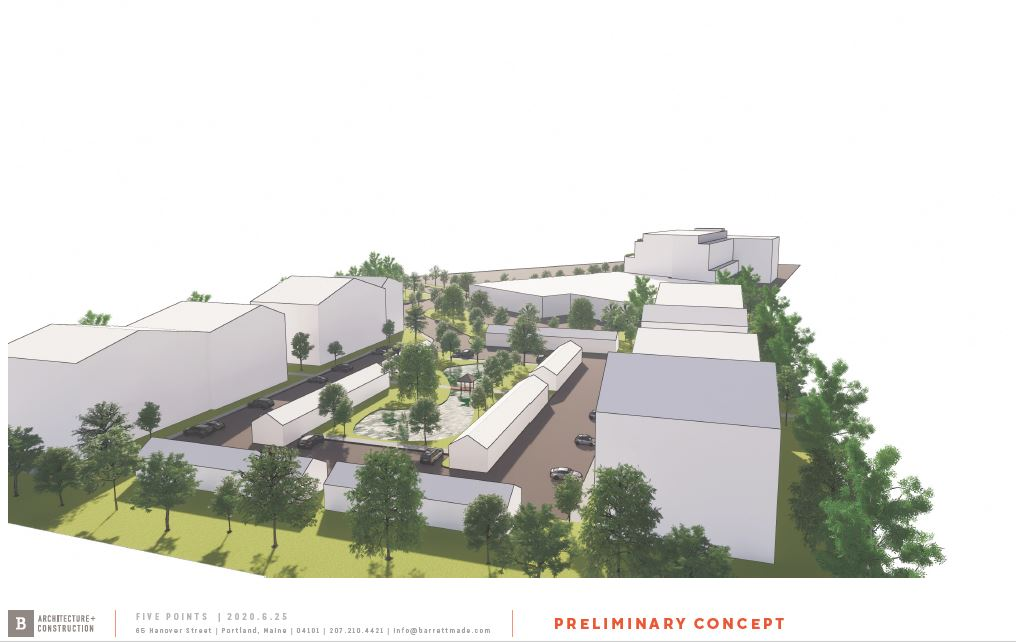 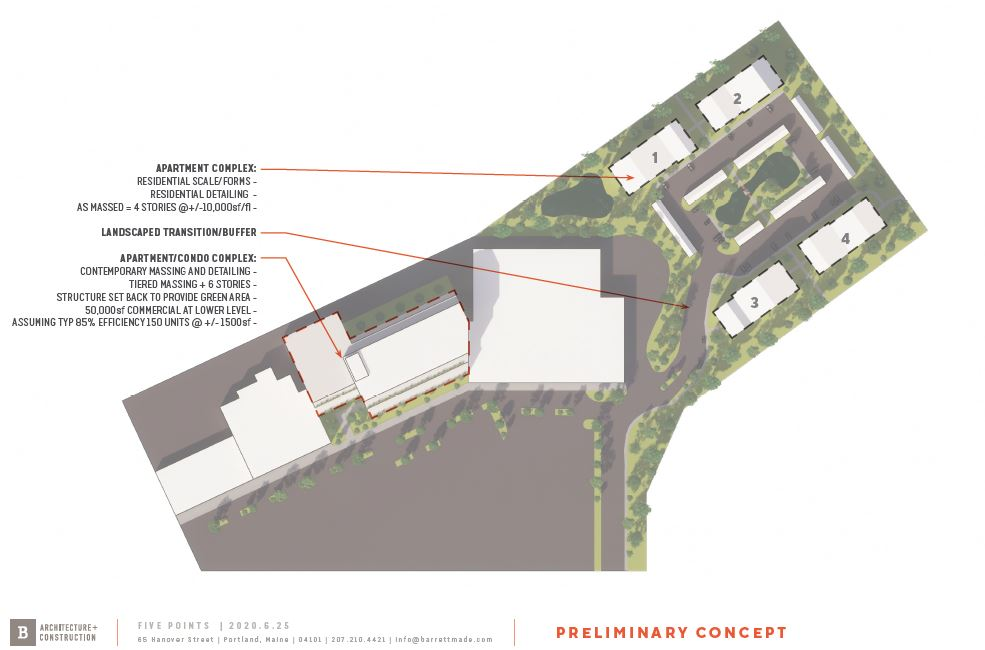 I think this project will look great from Rt. 111 as you drive by and as you enter the retail area up the hill coming from the direction of Sanford. Looks good. I hope it gets approved instead of dying on the drawing board like a lot of projects do in this area.
N

There was a proposal for a new 200-unit apartment complex to be built in the Barra Rd complex, got all approvals right before pandemic began. I wonder if that one died on the vine.

I think this is all great for the area - I think they dodged a bullet with this speedy economic recovery. The last recession hit the area hard and it was feared this current downturn could have derailed all these plans. Proximity, to Portland, coast, I-95, train, and Massachusetts. It was bound to happen eventually. Sometimes I think Mainers look at Biddeford-Saco like NH looks at Nashua. Down south, an afterthought to the rest of the state even though it is a considerable population center. When you combine the two communities it is over 40k people - which makes it more of a population center than some Mainers realize. Coastal Biddeford is some of the most exclusive real estate in Maine. Don't believe me - just take a drive around and look at the massive oceanfront houses and MA/CT/NY license plates in the driveway.

I think the post-pandemic world is going to help Biddeford-Saco. A 2-hour train ride and 90-minute drive from Boston is relatively attractive compared to the rest of Maine, but now with more people working remotely you will see more people move to the area. I credit the current mayor in Biddeford, he had a vision, and the culture there historically breeds a lot of naysayers and negativity. He stuck to his guns and it looks like it will pay off.
Last edited: Mar 7, 2021
N 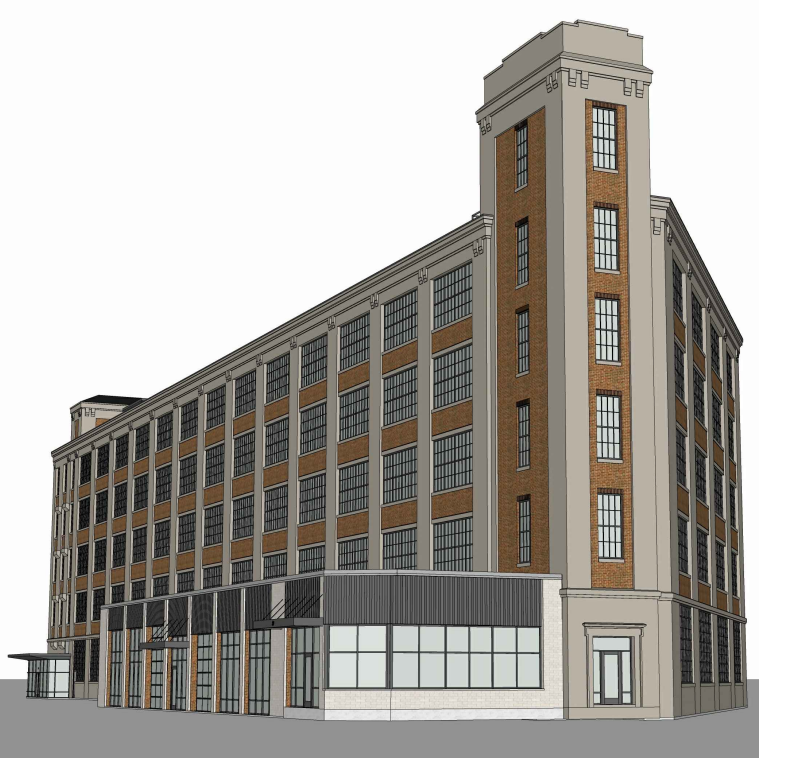 Always loved this building, glad its going to be saved fairly intact. When the other properties come into play it'll be interesting to see how Gooch St comes together.
T

Always loved this building, glad its going to be saved fairly intact. When the other properties come into play it'll be interesting to see how Gooch St comes together.
Click to expand...

More great development of Biddeford’s core.
I like to bike from S. Portland and Scarborough down to Saco on the Eastern Trail then hop on Route 1 into Biddeford. I’m hoping some infrastructure improvements follow this project because the area around the railroad bridge over Route 1 near this building sucks for cyclists and pedestrians.
Last edited: Mar 23, 2021
You must log in or register to reply here.
Share:
Facebook Twitter Reddit Pinterest Tumblr WhatsApp Email Link