It began with the campaign to save Paul Rudolph's buildings from extinction, and now the revival of interest in brutalism has spread to, of all places, London: 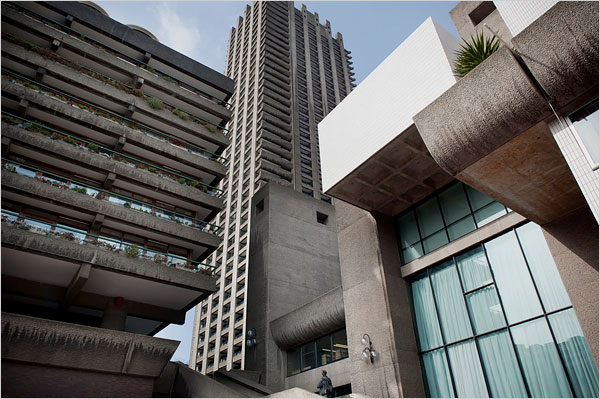 In London, Admiration for an Old Foe

LONDON ? It?s odd to think that the Modernist architect Le Corbusier has had a bigger influence on housing in Britain than in any other European country.

Odd because he never designed a building here, and also because so many Britons have long held him in particular contempt. Since the 1970s he has been about as popular around here as the French national soccer team, and more than a few concrete, Corbu-style projects, large numbers of which were constructed after the war to ease a convalescing nation?s housing shortage, have since been torn down or fallen into disrepair.

But as Peter Rees, a longtime city planning officer in London, put it recently, about the whole range of such projects, ?They were either blown up, or they?re now loved.?

Loved may be an exaggeration. But there is at least fresh debate about whether to preserve what used to be regarded simply as bad Corbu-derived architecture. Occasionally a cultural figure provides a little window into a nation?s shifting identity, and in Britain the self-regarding Swiss-born, Paris-based architectural genius who died in 1965, at 77, may now be one such figure.

An excellent traveling overview of his work, at the Barbican Center here, has turned out to be, of all things, popular. Big crowds have been visiting the gallery, itself a sign of some Corbu revisionism in that the Barbican, opened in 1982 near St. Paul?s Cathedral and designed by the British firm Chamberlin, Powell & Bon in a Brutalist vein that Le Corbusier partly inspired, has always been a place Londoners loved to hate. They voted it the city?s ugliest building in a poll in 2003, and have long moaned about its inscrutable labyrinth of concrete walkways and underpasses.

But Corinna Gardner, an assistant curator for the exhibition there, said that smart Londoners have actually been moving into the Barbican Estate and Golden Lane Estate, vast concrete apartment complexes that, with the Barbican Center, make up what Mr. Rees described as the largest Corbusian-inspired urban development in all of Europe. Likewise the refurbished Brunswick Center, near Russell Square, another Brutalist behemoth, with a ziggurat design, once an infamous example of failed council housing, has become fashionable. Well-heeled Londoners promenaded through its fancy shopping mall the other day.

Ms. Gardner added that ?ladies who lunch? have even been turning up at the Le Corbusier show, when not long ago most wouldn?t have been caught dead at the Barbican. That hardly proves a national cultural volte-face, but just three years ago a survey of modern design at the Victoria and Albert Museum provoked an angry passel of letters in local newspapers, which singled out Le Corbusier for a special caning. His problem, it seems, wasn?t only that a generation or two of modern British architects latched onto his urban plans to devise their own concrete, modular apartment blocks, which often weren?t very good.

There was also something, well, un-British about him.

?We have always thought in terms of living in homes, not apartments, and we tend to be very traditional,? Ms. Gardner explained. At that moment she was standing before a model of Corbu?s proposal to demolish a swath of central Paris and replace it with a suite of concrete towers. Across the gallery was his plan, also never realized, to wreak similar havoc in Algiers.

Mr. Rees, contemplating those sweeping schemes in his office at Guildhall, elaborated. ?Corbu said, ?I am to be worshiped,? which is very French, to see architects on a higher plane.? Mr. Rees spoke like a true Englishman, although he made clear that he is Welsh.

?Architects are seen here more as public servants rather than as gods,? he continued. ?We value individuality in Britain and resist being told how to live. The Romans tried to plan London, but what they did was quickly undone. We?ve been added to by waves of immigrants, from the Normans and Vikings on, bringing with them different cultural ideas. We?re a mongrel people. More than 300 languages are spoken by children in London today, and if you live in London for three months, you?re a Londoner. You will never be a Parisian unless your grandparents were Parisians.?

I tried that chestnut about British individualism on Peter Mandler, a Cambridge historian. ?It?s a self-regarding British myth that we?re special and that there is something foreign out there called the Continent; that we?re the land of liberty, and here the Englishman?s home is his castle, never mind that most people in Britain never lived in houses with their own gardens. By the ?60s more Britons lived in apartment blocks than anyone else in Europe.

?But there was during the 1920s and ?30s a visceral reaction here against Continental culture, and Paris was beginning to be seen not as a healthy rival but as something dangerous. It had to do with ?othering? the French who, unlike the British, the British liked to tell themselves, lived in bee hives. After the war this same attitude was predicated on nostalgia for Britain?s last moment of greatness, around 1940, and so the story had lingering cachet into the ?60s and ?70s. We?re not talking, in other words, about a timeless narrative but about a powerful one implicating Le Corbusier, which gained a purchase on British thinking during the high water mark of modernism.?

In truth, only about 7 percent of the British population today is black and Asian, much of that demographic in London. The benign melting pot myth itself goes back to imperial days.

But stories people tell themselves, whether true or not, can be as good as true to the people who tell them. Visiting Tate Britain after seeing the Corbu show one morning, I stopped into the ?Van Dyck and Britain? exhibition, and noticed an oil sketch by Rubens and two Van Dyck portraits that the Tate had recently bought: pictures by foreigners who worked here, acquired by a museum for British art. Upstairs, in the permanent galleries, on loan from Andrew Lloyd Webber, there was also a view of London by Canaletto, hanging not far from a painting by Samuel Scott, an English artist and follower of Canaletto?s.

All of which is to say that the canon of British art seems to be expanding along with Britain?s view of itself, and maybe this helps to account for some small change in the climate around Le Corbusier. And of course then there is the simple matter of fair play, a British obsession.

?The problem with so many apartment developments built in the U.K.,? Mr. Rees said, ?was that there was no taking into account the vital French ingredient of the concierge.? He didn?t literally mean French buildings all have concierges, obviously. He meant British housing wasn?t planned with long-term maintenance in mind, and Le Corbusier became a scapegoat for what resulted.

The show, a large and elegant affair, reminds us instead of the many beautiful buildings he designed and of his paintings. Like other groundbreaking figures, he wanted to be admired for something he didn?t actually do very well. He imagined Picasso and Mondrian to be his peers.

On the other hand, he left us the Unit? d?Habitation in Marseille, the modular housing project that became the model for countless bad imitations. It?s a remarkable building. An old black-and-white photograph of the roof, devised as a public square with parapets tall enough to block a view of the city and frame the mountains beyond, shows children playing in the sunshine.

On the barren concrete patio outside the Barbican it happened to be warm and springlike when I left the show.

Usually almost nobody?s out there. But what do you know?

That day there were children playing in the sunshine. 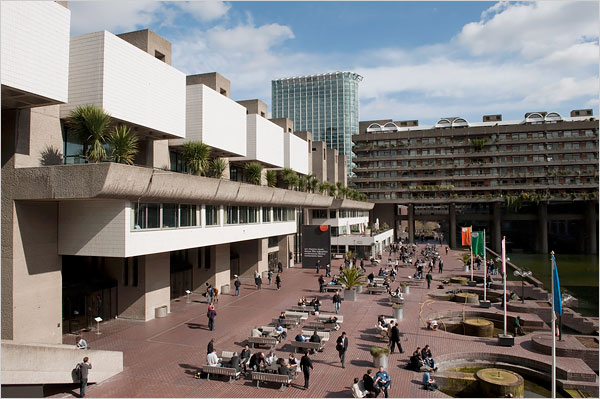 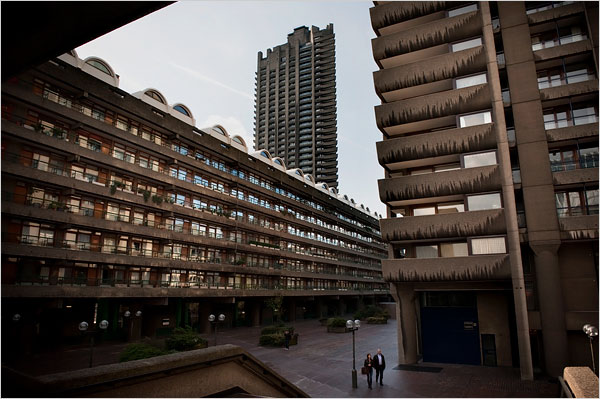 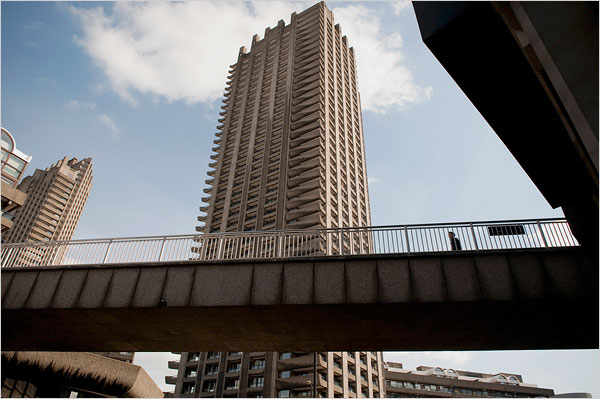 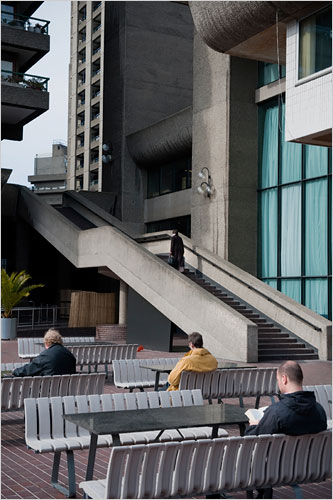 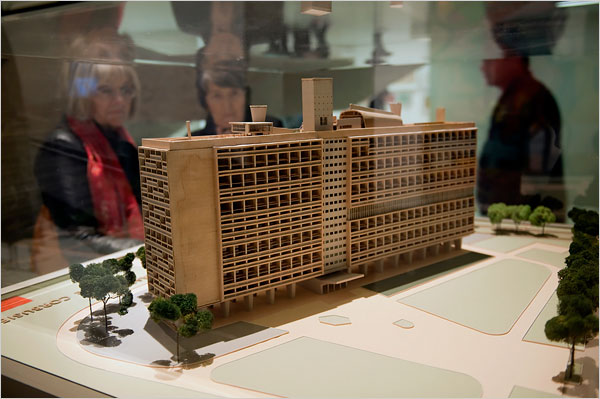 Posting this here, just because...

This is a freaky, sexy acid-trip of a movie, Kurtz's Camp relocated to a luxury tower-block. It's an imagined future from the vantage point of provocative 70s surrealism. If you like Jodorowsky, Kubrick, Fincher, Aronofsky, and Lynch, you'll dig it.

^ I'd have bet my life you'd have been the first one to respond to this. See it -- it's right up your street.

I saw it last year, and loved it. Bumping to recommend to the board in general.

Awesome, I'm a huge J.G. Ballard fan. High Rise is a great book...I had no idea there was a movie.

Crap publication, but Conde Nast Traveler has an article out called Architectural Reboot: The Return of Brutalism. It's from December 2018, but I saw it for the first time today, so that's why I'm sharing now.

If there are actually legs to this Brutalist Revival, I'm fascinated to see what it looks like in 2019. Will it mean some of Boston's notable examples are spared from the wrecking ball and renovated instead? I hope so.
D

Lrfox said:
Will it mean some of Boston's notable examples are spared from the wrecking ball and renovated instead? I hope so.
Click to expand...

Which ones are actually at risk? (and you can't mention any government-held ones, because, with government moving at the speed of... government, I see City Hall and the Lindemann Center as being indestructible).

The ones that come immediately to mind:

are surely not remotely in hazard, no?
3

I like brutalist buildings and while they succeed at usually being structurally interesting they're urban fabric killers..., but that can be fixed with money.
C

meddlepal said:
I like brutalist buildings and while they succeed at usually being structurally interesting they're urban fabric killers..., but that can be fixed with money.
Click to expand...

Seems to me that it can especially be fixed with some high quality glass, greenery, and a thoughtful lighting program.

DBM said:
Which ones are actually at risk? (and you can't mention any government-held ones, because, with government moving at the speed of... government, I see City Hall and the Lindemann Center as being indestructible).

The ones that come immediately to mind:

are surely not remotely in hazard, no?
Click to expand...

It's the government owned examples I'm specifically concerned about. Not because the city or state will flip them to developers, but because the lack of investment in upkeep will eventually lead to a point at which it becomes no longer feasible to operate/inhabit them and the only affordable alternative is to demolish/rebuild or relocate. I see this happening most likely with the Hurley/Lindemann.

I can't think of a privately owned example I think is at imminent risk, but I also don't think that there are many people out there who would fight to preserve most of the examples you listed should an opportunity to demolish/redevelop come along.


meddlepal said:
I like brutalist buildings and while they succeed at usually being structurally interesting they're urban fabric killers..., but that can be fixed with money.
Click to expand...

How much of this is a flaw with the architectural style as opposed with the autocentric approach to development that was popular at the time Brutalism was in favor? I agree with CTSH that modifications to the biggest offenders (City Hall/Lindemann/Hurley) could easily fix this. I also have a hard time calling 12-24 School, 70 Federal, or the Boston Architectural College "urban fabric killers." There's plenty of urban Brutalism out there that works.
C

Double dope. How come life in my high rise isn't that interesting?

TBH though, the cops are in my building all the time. 800+ apartments, there is always some tomfoolery or a fist fight in the resident library or an ice luge on the roof deck...

Came across this on the interwebs. Dank AF. 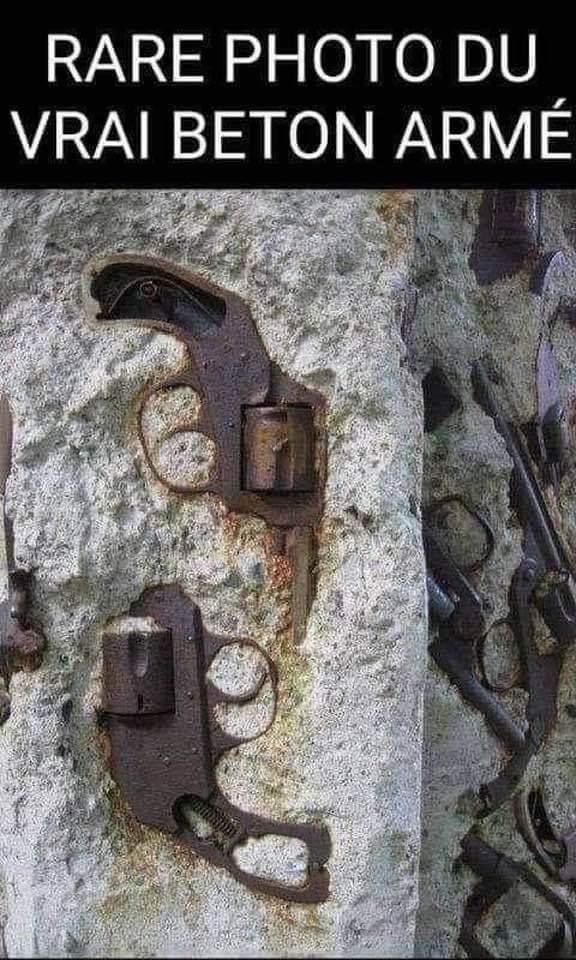