Concord, New Hampshire, thanks largely to the work of a single, resourceful developer, has seen a fair amount of development in its downtown in recent years. I thought it was probably deserving of its own thread.

The Orr & Reno law firm and an expanded Gibson's Bookstore will be the major tenants in Concord developer Steve Duprey's new building at 43-45 S. Main St., where construction is scheduled to begin this summer following the demolition of the New Hampshire Bindery and an adjacent building.

Steve Duprey wants you to turn that frown upside-down.

Duprey said the exhortation, in 1½-foot-tall letters on a 2,000-pound stone, is "a little bit of whimsy for a new building." He said he decided against putting his own name there, as "my ego's plenty big without that." 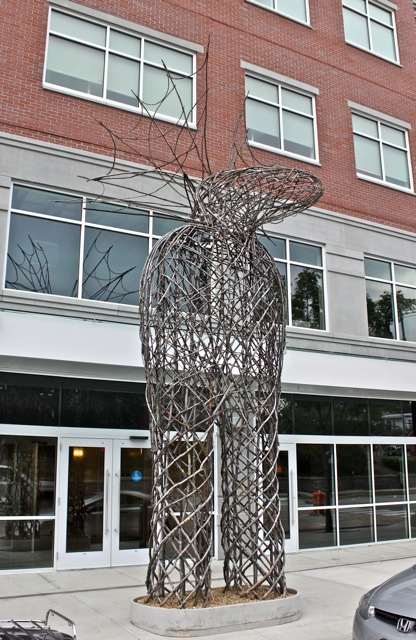 Moose Myth was recently purchased by Steve Duprey and moved from Portland, Maine to Concord, New Hampshire where it will grace the entrance to the new Smile Building on 49 South Main St.

The city of Concord has won a $4.71 million TIGER IV federal grant to improve Downtown Concord’s Main Street, according to a press release from U.S. Sen. Jeanne Shaheen, D-NH.

The Endicott Hotel stands empty as it prepares for its metamorphosis this year from low-income housing to market-rate apartments.

I also came across this online though I'm not sure which part of Main Street its planned for or how solid of a footing it's on.

The Capital Commons Development and Garage opened in 2007 with an independent movie theater and office space, but restaurant space only opened last year.

It took much longer than expected, but O Steaks and Seafood has finally opened in Concord. The chic new setting in the Capital Commons is making a grand statement about prosperity and renewal on South Main Street. With the beautiful Red River Theatre below and the Capitol Center for the Arts just down the street, the area is primed to thrive as an entertainment and dining destination.

Had a great time in Concord last year, had drinks at O and visited a couple local stores (including a shop that sold individual coffee pods ...), then took in the Anderson / Wakeman show at the concert hall. Enjoyed it. Some photos exist on here, somewhere.
C

Thanks for the Concord updates, Smuttynose. I've never been to this town but it's on my list of places to visit someday. It's cool that a single developer has been able to have such a positive impact.
P

Concord has its own thread, somewhere....although it may have just been a one time photo post. Thanks for the updates. I was in Concord on the way to school a few years ago and learned that the population went from 28,000 (stagnant plateau for years) to 42,000 in a matter of just a couple years, which made it bigger (if less vibrant somewhat) than Burlington, VT.
P

It looks like the "Proposed Office Building" is next to the Smile building.

Anyway, it's great to see the ongoing development in Concord. The downtown has so much potential, but currently seems pretty dead on the weekends. Adding density and market-rate housing will be a big help to improving that.

Concord definitely feels smaller and less lively than Burlington, but despite its huge land area, the population is pretty concentrated in the old parts of the city right outside downtown. With the right changes and smart planning (which it seems to have plenty of, certainly more so--at least that's being implemented and seriously considered--than Manchester), I think it could really take off as a small, kind of funky, culturally rich city. Speaking of the funky, I love that the developer has chosen to name the building after something other than himself, and something as whimsical as Smile. Brady and Sullivan in Manchester could learn a thing or two from that, and maybe stop naming everything they own Brady-Sullivan so people know where the hell they're talking about.

On a side note, I always wish that Concord and Manchester were across the river from each other--sort of a Boston and Cambridge relationship. As it is, they're close enough to feed off each other (not necessarily in the good way), but too far to be a cohesive urban area. A lot of the cultural and governmental stuff ends up in Concord, whereas a lot of other cultural and economic stuff ends up in Manchester. The nightlife is in downtown Manchester, but the walkable retail downtown is in Concord. Together, they'd be one hell of a town. Obviously, they'll never really be across the river from each other, but I'd love to see more regional cooperation and planning between the two. And of course, commuter rail service.
N

I hate Diagonal parking , why didn't they make it Parallel Parking?
P

Nexis4jersey said:
I hate Diagonal parking , why didn't they make it Parallel Parking?
Click to expand...

Main Street is extremely wide. That being said, I agree with you.

At least one advantage of perpendicular parking: safer for cyclists.
N

czsz said:
At least one advantage of perpendicular parking: safer for cyclists.
Click to expand...

In what way , its hard to see when backing out?
H

People at least usually look behind them when backing out...the same usually can't be said for when people open their doors.
N

Hutchison said:
People at least usually look behind them when backing out...the same usually can't be said for when people open their doors.
Click to expand...