Could a moderator please move this to the Maine forum? Thank you!
T

There's an article in the Press Herald about potential development of 30 acres in South Portland between Bug Light Park and Breakwater Dr. The article notes,

"PK Realty is tackling traffic worries first, working with the Greater Portland Council of Governments to conduct a transportation study that would consider potential solutions to increased congestion, Packard said. It would assess the potential benefits of additional public transportation on Broadway, demand-triggered traffic lights and harbor shuttles between South Portland and Portland."

PK Realty's decision to engage with GPCOG seems encouraging and I'm hoping it will result in increased adoption of recommendations made in the Portland-South Portland Smart Corridor Plan published 6/2018. It would be great to see the developers pursue a project with a significant residential component and, rather than being deterred by Broadway's limited capacity for additional personal automobiles, push for the improvements to public transit and bicycling described in the Smart Corridor Plan.

In particular, S. Portland introduced transit signal priority in 2019 and that should be extended to Portland. Route 21, which services the area, runs every 30 minutes at best. Getting that down to 10 minutes would be awesome. Getting frequency on the weekend to more closely resemble weekday service would be huge because it's pretty weak currently.
N

One thing I've thought a lot about the last few years is turning a section of Fore St into a pedestrian mall - mainly between Union and Exchange, but possibly extending to Market. And maybe up Exchange to Milk. This section is overrun in the summer (with pedestrians) and, in the surrounding seasons, it can feel fairly full. Obviously there would be some logistics - the parking garage would loose an entrance and the hotel's drive would have to taken into consideration (and general deliveries with no back entrances).

Side note - happy to have found this community. Reading through posts the last few weeks I've been pleased to see support for things I've felt alone on - building up, turning one way into two way, etc...
P

Welcome noms, it's always nice to have some fresh insight on the many topics discussed on this site. Also refreshing to know others share the same passion even though we may sometimes differ on what's best for Maine's premier city.
T

A draft version of One Climate Future: Charting a Course for Portland and South Portland (https://portlandme.civicclerk.com/Web/GenFile.aspx?ad=6765) was released earlier this month. It's a lengthy, robust and ambitious plan and I'm still reading through it.

One notable goal articulated in the plan is the following, "By 2035, 26% of trips in the cities will use public transit or active transportation (up from 12% today)." Hard to believe but the plan describes some very promising opportunities such as:
Those would be solid improvements to public transit but, without accompanying changes to land use regs, they likely wouldn't be enough to get many more people on the bus. The folks that put together this plan are aware of that and highlight the importance of strengthening transit oriented development nodes. There is discussion of eliminating parking minimums, establishing parking maximums, and introducing demand-based pricing for parking. It seems unlikely we're going to see much TOD unless the cities seriously limit the amount of parking that can be built in areas well suited to transit while also incentivizing increased density. On that note, the plan suggests possible future activity around allowing construction of ADU's by right and permitting duplexes and triplexes in single family housing districts. I know from personal conversation there is some appetite for the latter in Portland's City Council.

There's nothing radical in the plan though I'm sure there will be plenty of NIMBY opposition to allowing more housing, especially in areas zoned exclusively for single family dwellings. While not groundbreaking, there are a lot of actionable items and goals that can be reached.

For those hoping for light rail or a streetcar, it doesn't appear to in the cards. It's a little disappointing but given the amount of federal funding that would be necessary it's not surprising. It is nice to see a realistic approach and, if done well, BRT could hugely improve service in the area (though I still think this would be a sweet light rail system- https://metromapmaker.com/?map=JAsuFyaZ ).
T

Portland will be, “reconfiguring the intersection of Congress, High and Free streets... Changes intended to enhance pedestrian safety will include eliminating one entrance to Free Street and expanding the pedestrian plaza in front of the Portland Museum of Art.” 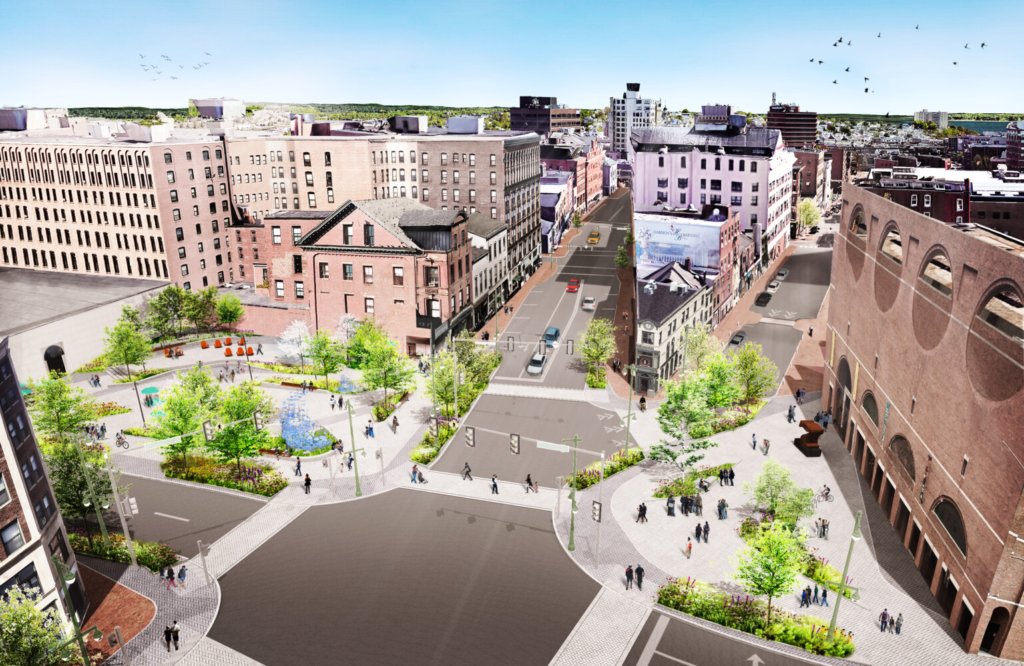 The intersection of Congress and High Streets is in the heart of the city's downtown, and changes intended to enhance pedestrians' safety will include an expanded plaza in front of the Portland Museum of Art.

So glad to see that pedestrian "game of chicken" right turn from High Street to Free Street eliminated. That new idea alone is worth the entire project. And why are they using art from a NYC artist for the plaza? Please, let it not be something like "Tracing the Fore," which was probably the dumbest outdoor art idea in the history of outdoor public art. If you remember, it was basically saw blades sticking up out of the grass, preventing people from going anywhere near it.
C

Last I'd heard, the artist was going to be Sarah Sze, who's done amazing outdoor sculpture for MIT and the High Line:

For me, a silver lining of the pandemic was that the area around the Ocean Gateway was very quiet this past summer allowing us to enjoy several open container picnics down there. Really nice spot and this proposal would create significantly more manicured public space along the waterfront. 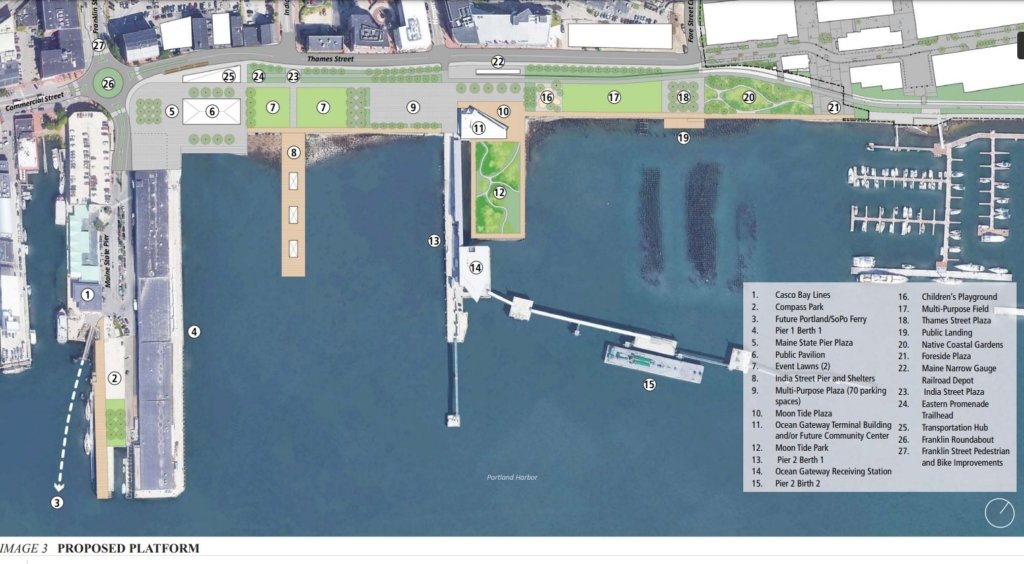 The city is receiving pro bono assistance from a team of community leaders who share the vision for public open space on the eastern waterfront.

Personally, I like that the current configuration keeps the parking lot in the area of Item 17 in the proposal; it makes it far easier to bring my son down to see the large cruise ships without him having to go to the effort of leaving the vehicle (just take my word for it that that's significant additional effort).
P

Not sure if I’m having brain fart and forgetting, but why do we not have a few of these downtown? Advertising could pay for it