A couple shots of Millers River, mentioned upthread by FK4. 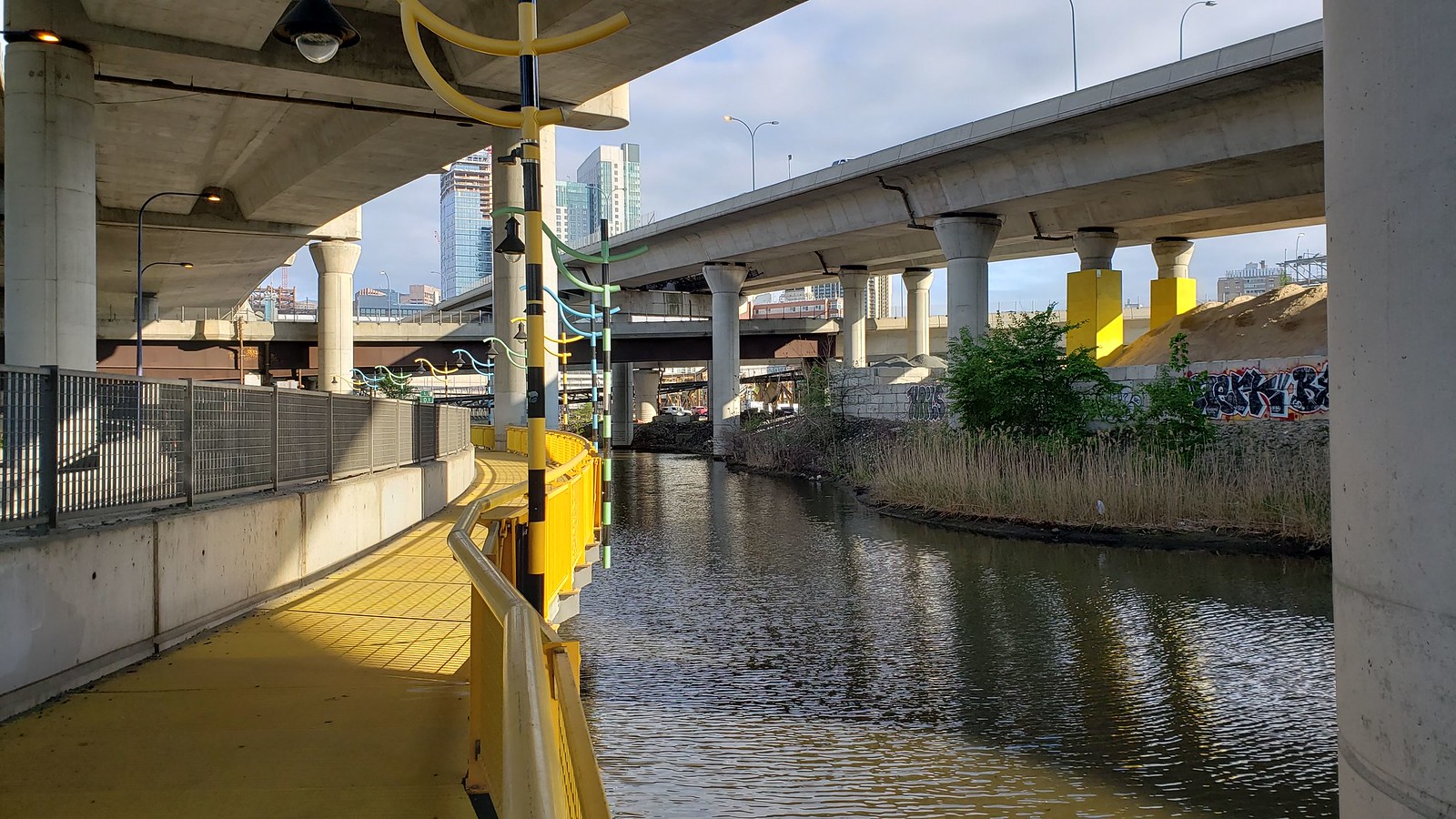 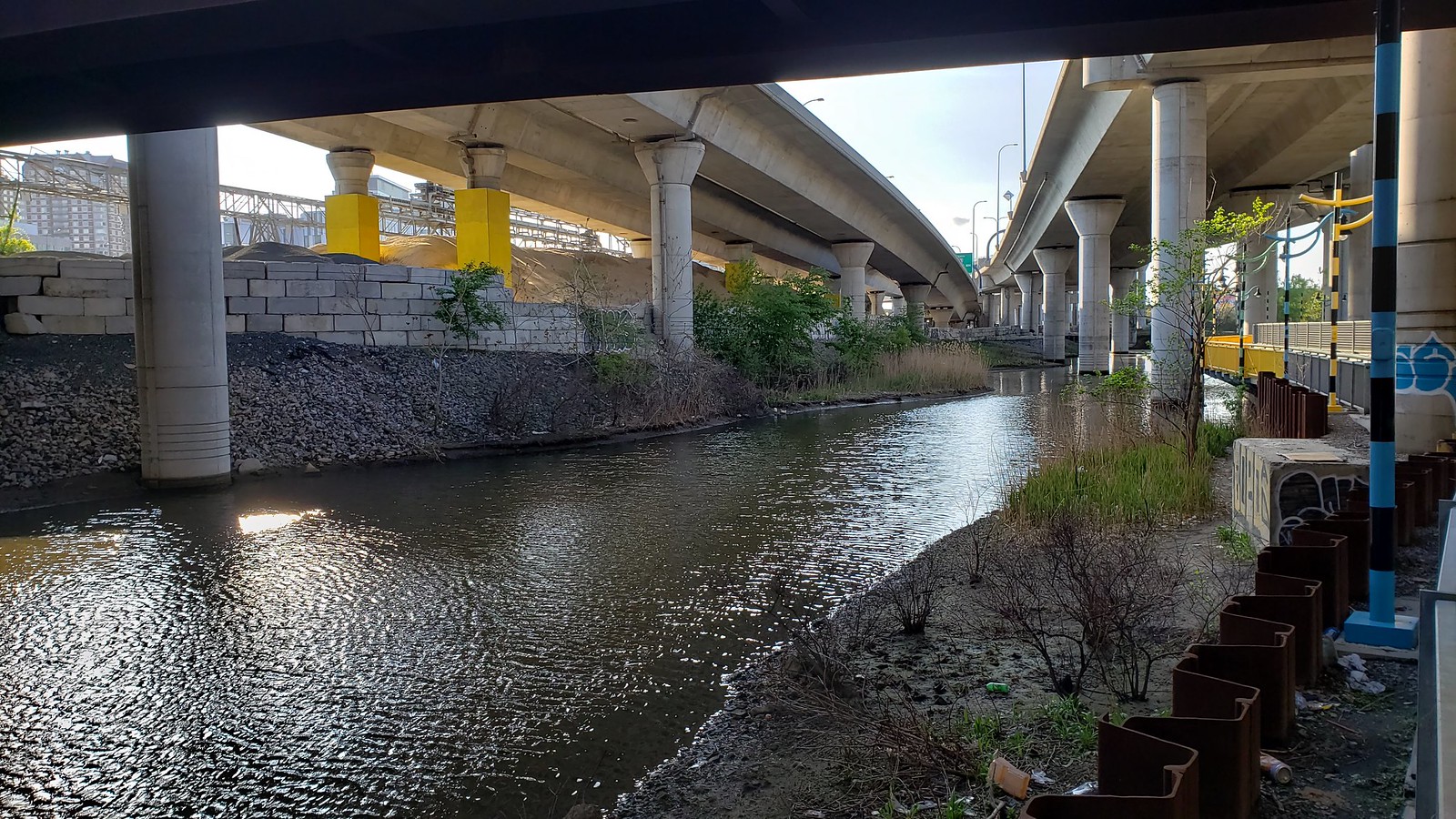 ^
Nice Poolio. I haven’t been in a while, but I think there’s some plaques about the oyster farming and potato sheds that used to be here, too. The pathway that gets you up to Austin St was a great project.

The pathway is pretty nice, and turns what would otherwise be a seedy and inaccessible underworld into an interesting walk. Problem is that the path doesn't really lead anywhere. It dumps you off at eight lanes of traffic and a huge vacant lot, not a single store or coffee shop or residence or anything within striking distance. Nothing to do but turn around and go back the way you came.

Developing those lots on Rutherford Ave would be a boon, and might actually bring foot traffic to the pathway since it would be a convenient way to connect to North Point and downtown. As it is, I was the only person there on a beautiful spring day, while there were quite a few people in the riverfront parks and on the pedestrian bridge between them. The skate park was packed.

Looked like someone had been living at the potato memorial. There was a shopping cart, clothes draped all about, and other detritus.
F

So between Sunday and yesterday, I kayaked a huge chunk of the Charles way upriver, and it was awesome. The experience was a mix of nature and history, but I'll put it here.

Sunday, went for a walk with my family at Medfield State Hospital (the last time I had been there, there was a guard who would chase you away) and it’s pretty amazing to walk through the complex. They’ve also done a nice job with some riparian restoration. After that, we put in at Rt 115 at the border of Millis and Norfolk and took out at Death Bridge in Medfield. Mostly totally screened from any development that entire way, only a few rare villages of houses close the water, and some interesting home-water interactions (rope swings, floats, etc)... the Charles River Natural Valley Storage Area is an amazing concept, and has resulted in a pretty unprecedented preservation of natural habitat around the upper Charles. The whole flood control concept, including the Dam in Boston, is worth reading about. Anyway, at this point, the flooding is immense and the amount of water — overflowed wetlands, extending at some points for what seemed like a half mile on either side — was amazing. The water was good, no obstacles; it’s a great stretch to do. I could see stone abutments from the former Dwight Street Bridge and also the embankment for the original Death Bridge before Route 27 was built. The entire trip took around 3 hours, maybe a bit more. We used two separate cars for this one, but could’ve easily biked back, which we did for the second trip.

Yesterday, put in at Caryville in Bellingham and took out at Rt. 115 in Norfolk (technically still Millis, but right on the border). I would not do this segment in its entirety ever again, but the trip was worth it. There was an old factory at Caryville that was only demolished a couple years ago, and a dam that was just removed last year. I incorrectly assumed the foundations, which were built athwart the canalized river, had also been removed. About 60 seconds after putting in (the river is a swift moving stream at this point), we were swept right under the foundation and had to yank our kayaks out through a slit between the cement and an old cement pipe. The river from there until Pond St was pretty much an endless series of fallen trees, all of which we were able to scooch over or limbo under. Very wild here. Then portage over the West Medway Dam, which had that feeling of once being an important place 200 years ago, now all reasons of significant interaction with transit and commerce long vanished. This was an easy portage and the stretch from here to the Sanford Mill in Medway was really nice. I would definitely do this part again. Some nice older bridges. Not too many obstacles, but the water was high.

Sanford Mills is a former complex in Medway that was very nicely turned into condos. The whole project is really impressive; the back side that faces the driveway entrance is a long, low, 2-story brick mill building very handsomely turned into townhomes. The portage was completely miserable, however; this is not the place to start a trip. After hauling across the bridge to the Franklin side we had to schlep down an extremely steep and high ravine back to the river. At this point, the rapids were insane and should not have been attempted at our skill level or with this amount of water in the river. Got completely soaked, very lucky we didn't capsize or get hurt. This might be doable with more experience than I have, and with a lower water level, but I'm not sure. I probably would not attempt this again. After Walker Street, it got very nice again, finally calmer water. Approaching Populatic Pond, it was extremely wild, lots of flooded thickets, ducks, beaver, did not feel like Mass. Populatic Pond is an interesting body of water I had never heard of until yesterday... it's huge, and the Charles flows into it, and out of it, with the pond hanging south off the river like a clam belly. I would be interested in learning more about the people who live there, especially about the people who only have summer homes there (12%, according to a water survey report from a years ago)... random... also, learned about Kingsbury Pond, just to the south, which apparently is shrinking rapidly due to pumping from the adjacent town of Franklin. Kind of like a mini version of the Aral Sea disaster. Who knew?

After Populatic, the river was very calm and pleasant, we saw a lot of paddlers and fishermen. For anyone attempting this stretch, I would get out at Myrtle Street — Dean Street is the next bridge and it's calm until close to there, but it speeds up as you approach the bridge and then at the bridge there are more rapids and it was a little hairy. The stretch after the Dean Street bridge (which is in some village that is long gone but there used to be a mill, called Rockville) we coasted until getting to 115. The water was fast but fun. The 115 / Baltimore St. Bridge apparently is in Baltimore, another village that probably used to have more significance than just a name. We took out there, biked the 6 miles back through Medway to the car.

Medway itself is a very interesting place, evocative of I don't know what, but I had never been there before, despite always knowing of it as a town that's basically metro Boston. It had the feeling of a place that used to have much more significance as a town on The Road to somewhere, and probably had much more commerce from mills as well as summer resort people trying to get some country air. Now, it's pretty sleepy, with a pro-military (but without the Gadsden flag politics) and somewhat of a mixed working/middle class feel, with clean and well-maintained roads and a lot of large developments going on, with some sizeable density (I did see a pair of actually massive developments from the river — too close to the river for something so monstrous, but I guess it's good for the town).

The most interesting part for me was finding two different sets of fieldstone abutments in Medway and then Rockville that clearly held a road or a bridge, but I searched all the old local maps on mapjunction and couldn't even find a right of way of any bridge or old railway line or even any evidence of an old ROW on new or old aerials (the West Medway Branch ran north of the river; you can see a lot of nice old evidence of that line in Medway itself). I even emailed the Medway historical society, since it was crazy to not be able to identify these obvious former bridges. Anyway, I have a 1908 map on my wall that belonged to my grandparents, a copy is viewable here, and it's super cool map since all the roads and rails are only drawn if they're close to the river or a major tributary. It puts all these old towns in perspective in their relationship with the Charles. I glanced at it tonight to take a look at the water I'd traversed, and right there, that map has the old ROW of a RR that had been abandoned even then. More googling to ID it, and it was called the Medford Branch and only existed from 1852 to 1863. The power lines, at least from Myrtle Street up to where they approaches Village Street, follow the old ROW, and you can trace the property markings down to Norfolk. So far, I can't find any maps or photos of the line, but it's described here.