How would you describe/characterize the current build cycle??

odurandina said:
@Boston Peak Highrise. We are now past Peak Highrise.
i'll get some pushback. But looking 2.... 3.... 4 years out;
The euphoria of the Spring/Summer 2016 seems an eternity ago.
speaking to highrises taller than ~390'
highrises even taller than ~280'
the End is nearer than we think.
Click to expand...

1 Dalton is just wrapping up,
Winthrop sq is u/c,
govt ctr res is topping out,
hub on causeway office twr is half way,
Hub res is t/o,
hell even 1POS has a crane on it,
Cambridges new tallest in (ever) is wrapping up cladding + like 5 more towers u/c,
garden garage is u/c,
multiple buildings u/c in Seaport...
South End,
Fenway ctr...

Id deeeefinitely say that right now today is the peak so far.

Just having 3 office towers u/c downtown alone is unheard of in decades... 4 if SST ever gets its shiyat together. When was the last office tower built? Atlantic Wharf? As unheard of as that is.. on top of that our 2 tallest buildings after the Pru and Hancock are both U/C too, and at the same time as the 3 office towers. Absolutely nuts. 2019, right now today, is probably the most well ever see happening at once.
Last edited: Aug 30, 2019

The city has grown a lot. While some politicians and others in power cling to a small mindset there are signs that Boston is creeping toward embracing a more important position in the world.

tocoto said:
The city has grown a lot. While some politicians and others in power cling to a small mindset there are signs that Boston is creeping toward embracing a more important position in the world.
Click to expand...

Good one. Maybe the provincialism will fade as Boston fully enters the 21st century. Hopefully that will happen to the entire Boston metro area as well.

Charlie_mta said:
Good one. Maybe the provincialism will fade as Boston fully enters the 21st century. Hopefully that will happen to the entire Boston metro area as well.
Click to expand...

I hope so, but New England is institutionally set up in a provincial way, with its hyper local governance. I wouldn’t count on it without some radical reforms that would defy 400 years of New England political culture.

George_Apley said:
I hope so, but New England is institutionally set up in a provincial way, with its hyper local governance. I wouldn’t count on it without some radical reforms that would defy 400 years of New England political culture.
Click to expand...

The good thing is governance scale is a feature of population not area, so as Boston grows governance becomes less local. Brookline, Newton etc will be problems forever though...

2016?
Yeah, when it seemed like 30 towers >380' might be u/c within a few years.
MT (Boston's first 200m skyscraper in 73 years) was near opening, 1 Dalton (another 200m tower) was u/c,
Winthrop Square proposals were pushing high as 780'.
the former and latter Accordia designs inspired much spirited discussion....
there was talk about something very tall going up at Back Bay Station, tall proposals were coming out of nowhere for 1 Bromfield St, not long after, 1000 Boylston St, and pencil towers at 171 Tremont--and 2 more above theaters! Greg Galer's head was about to explode,
SST was coming back (going ~690)'
Copley Tower was due to go u/c
Harbor Garage was rumored to be moving forward,
3 towers and mid-rises were approved for Govt Center Garage.... 1 tower in North Station was up and 3 more were approved pushing 500'...
Garden Garage developer had early plans for a tower pushing 400' at 45 Worthington St. ....40 Trinity was nearing approval,
Dudley Square was planned to push ~400',
380 Stewart St was rumored to be going u/c soon,
Highrises at 2 Charlesgate W & The Huntington were popping, 2 hotel towers pushing 280' and 340' were proposed for Chinatown (since have gone stale),
there were rumors of more garages being planned for highrises,
including Motor Mart Garage, and Lincoln St Garage and one or 2 others.
In 2017/18, proposals for 3 tall mid-rises were added to the Theater District area.... There were several other mid-rises planned near the Greenway.
At one point, there were so many projects moving through Article 80, there weren't enough nimby's to filibuster meetings, halt projects, and generally gum up the works to the point where they could be stopped.
It was a crazy time in Boston construction.
Unfortunately, when you consider projects that have topped out or have gone stale vs/ the comparatively few we have remaining.... nimby's ability to organize movements to oppose even what few (tallish) projects remain under review, and the situation of remaining parcels belonging in the 'next to impossible' category, the case can easily be made that 'peak tower' has come, and gone.

1 Dalton is just wrapping up
it's completed. control/alt/delete

hell even 1 POS has a crane on it,
This structure topped when Jimmy & Rosalynn Carter were toting their empty/fake suitcases up the stairs of Marine 1/AF1, etc.

Cambridges new tallest in (ever) is wrapping up cladding
+ like 5 more towers u/c,
towers? Cambridge isn't planning iconic height.
When you're up close, something about this makes it appear shorter.
Maybe the girth, and all the surrounding fatties is throwing me off.

3. Hub on Causeway office twr is half way,
Yes

5. One Congress office tower is u/c
Yes, it is.


into the black....
That's a lot of failed, cancelled, dead, stale, etc

i hope we're not past 'peak tower.'
Unfortunately, i think we probably are.

vanshnookenraggen said:
Since this is a dead project perhaps we just close the thread until a new proposal is brought up?
Click to expand...

Seems a bit drastic. The dead tower threads are as good a place as any for colorful discussions, failed/peak tower self loathing, etc....
Last edited: Sep 3, 2019
B

One can only wish we are past 'peak tower' or w/e the hell that means.
D

It still has a solid ~25' worth of the mechanical envelope to go. That is not an insignificant amount from a skyline perspective. It will push it above all the towers across the plaza except for One Boston Place.
S

tocoto said:
The city has grown a lot. While some politicians and others in power cling to a small mindset there are signs that Boston is creeping toward embracing a more important position in the world.
Click to expand...

Yup. The only brake on the growth of Boston/Cambridge is pedestrian politicians handcuffing mass transport initiatives.

The biotech CEOs could not have spelled it out any more simply for Charlie Baker than they have. If he doesn't understand the basic dynamic at this point, then long-term growth is not his priority. It is what it is. It can't be dumbed down any further for him.

I would say Boston's development has been a solid, slow and steady type cycle. It doesn't compare with the transformative crains everywhere style booms of Seattle or Toronto. Those are clearly cities that are climbing urban tiers. But it's a nice solid holding its own type boom on par with Minneapolis or San Francisco. Its helping Boston maintain it's relative standing as one of the more urban cities in the country. But hasn't done a lot to shake the somewhat smallish city feel.

Charlie_mta said:
The 1965 Plan for Boston addressed transit, highways, development and redevelopment in a very site-specific master plan. It only included Boston, but what's needed now is a similar type of master plan encompassing the entire metro area extending out to I-495.
Click to expand...

don't know if this's been posted before; prolly has....

Here's a nice visualization highlighting (yellow marks) the most recent downtown boom to date. 5 towers in the last 5 years, with 3 more over 600' yet to come. This doesn't even include 1 Dalton(!) let alone the swelling of the Seaport, Kendall, and other neighborhoods ringing downtown. 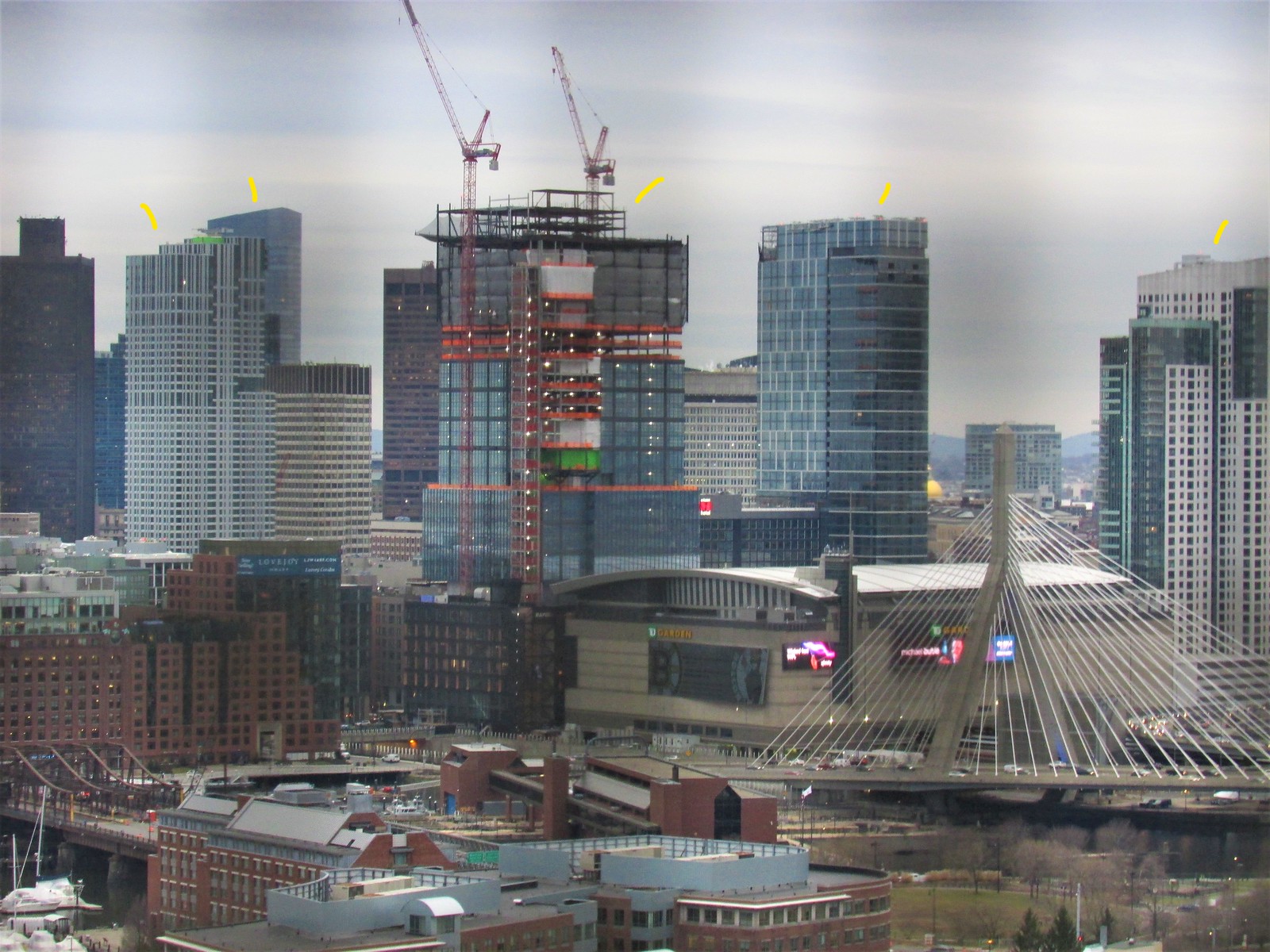