In praise of ugly buildings

In praise of ugly buildings
Could this be the decade during which Boston?s most ridiculed are recognized as treasures? 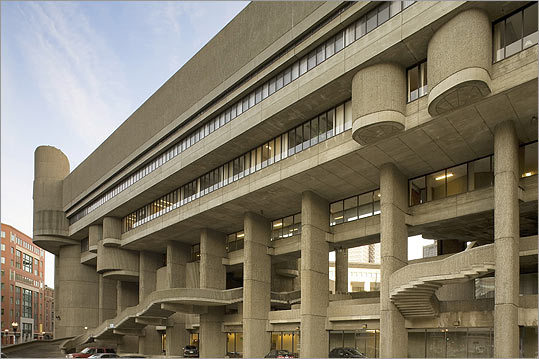 If you?re like most people, here?s your take on Boston?s mid-century-modern buildings: architectural abominations that stomped into town in the 1950s, ?60s, and ?70s, trampled the delicate brickwork of yesteryear, assumed outsize proportions in the skyline, and today lord their ribbed concrete and geometric eccentricities over the city like barbarians that got through the gate. Mayor Tom Menino is right there with you. He minces no words when it comes to his dislike of our most famous mid-century-modern building, Boston City Hall.

But after half a century, at the start of a new decade, perhaps the time has come for a reconsideration: Could it be that the buildings are not inherently out of place in Boston? That rather they are feats of imagination and craftsmanship and tragically misunderstood -- the architectural equivalent of an abstract Jackson Pollock painting or a forbidding 12-tone Arnold Schoenberg orchestral work.

?These buildings broke with hundreds of years of tradition, so people have a hard time with them,? says David Fixler, a Boston architect and president of the New England chapter of DOCOMOMO, an international group that seeks to preserve modern architecture. ?But the more they understand them, the more they appreciate them.?

?To just say they are ugly is a cop-out,? says Chris Grimley, a designer and co-curator of an exhibit last year at the South End?s pinkcomma gallery that celebrated Boston?s mid-century-modern buildings. ?They are very noble, authentic architecture.?

Defenders of the structures recently got a boost when the city?s Landmarks Commission scrutinized the downtown landscape and concluded that earlier surveys of post-World War II buildings had displayed a ?widespread lack of understanding, appreciation, and context for buildings of this period.? Some are, in fact, ?architectural treasures,? the commission concluded, even as ?modern architecture has not yet gained the popular stature of traditional design in our culture.?

Resentment of modern buildings was bound to be acute in Boston. We are a city that revels in our history. The mid-century-modern buildings -- most notoriously, those that rose in Government Center on the site of the leveled Scollay Square -- buried blocks of history to make room for themselves. But the buildings? defenders say that past sins must be forgiven and that the buildings should be recognized for their own history -- that of ushering Boston into the 20th century. When they were built, Boston was suffering from the departure of its manufacturing base. Nothing of note had been built in downtown for decades. The new buildings rising on the skyline were a sign of turnaround. ?These buildings countered the perception that Boston was an economic backwater,? says Mark Pasnik, a Boston architect and co-curator of the pinkcomma gallery exhibit.

And how better to mark a new beginning than with a new look? There would be no tinkering around the edges, no nips and tucks to styles of old. The modern buildings upended conventions and burst forth with swagger and bravado; they were often shaped from concrete, newly rediscovered as a durable and expressive construction material. Structures such as the John F. Kennedy Federal Building, 133 Federal, and St. Anthony Shrine emerged highly stylized and jarring to conservative Bostonian eyes, and they constituted what Boston University architecture professor Keith Morgan calls ?large-scale works of public sculpture.?

Take the State Service Center, a building housing health and welfare agencies on Staniford Street that consistently is waved off as one of the ugliest buildings in Boston. But a close look reveals delicate theatrics, much like a Gothic cathedral. The concrete walls are chiseled to look like corduroy, stairs curve and bend around pillars and bridges like unfolded paper fans, and painstaking detail can be glimpsed throughout -- a handrail perfectly molded to fit the grip of a human hand. The building is commentary, too. Rising when social strictures were being jettisoned as artifice, its concrete structural components were deliberately left visible to the eye, with no brick walls or stone sheaths as a veneer. The building leaves mid-century-modern fans awe-struck. ?Spectacular,? Fixler says. Pasnik notes: ?So bizarre and bold and full of chutzpah, at a minimum everyone should agree it is compelling.? Yet calls continue for its demolition.

In other cities, mid-century-moderns often have fared little better. Many remain under threat of razing. Some have been so radically overhauled that their unique qualities have been stripped away. New York?s 2 Columbus Circle overlooking Central Park, once dismissed as kitsch, underwent a recent renovation in which its marble exterior was replaced with glazed terra-cotta tiles -- which one critic panned as ?schoolmarmish.?

Preservationists say that these mid-century-moderns need not be flies in amber. The key to their survival likely lies in sensitive reworkings that honor the structures? integrity but make them more palatable to the public. (The Barbican arts center in London and the Yale architecture-school building in New Haven are two restorations held up as exemplars.) Even some tending-to would help. Many of Boston?s mid-century-moderns have been allowed to deteriorate, and their exteriors have turned sooty and water-stained.

Bostonians owe these buildings a bit more time. Architecture styles tend to suffer the heaviest criticism 30 to 50 years after their introduction, Fixler explains. Victorian architecture came under ridicule in the mid 20th century, and calls for its eradication were heard. Mid-century-moderns may have landed in a pool of criticism from the get-go. But with open minds, Bostonians could come to love them. Or at least respect them.

Sarah Schweitzer is a member of the Globe staff. E-mail her at sschweitzer@globe.com.
Click to expand...

Architecture styles tend to suffer the heaviest criticism 30 to 50 years after their introduction, Fixler explains.
Click to expand...

Ergo, not this decade. People first began fixing up turn of the century Victorians in the 1960s, and the postwar international style mounted a comeback in the 2000s. I think there's almost a 60 year rule - wait for the 2020s to bring a Brutalist renaissance.
R

St. Anthony's Shrine, jarring and ugly? Not to me. I'd keep 133 Federal, too (but isn't someone planning to demolish it?)

Nice piece. Wonder if she's ever stopped by here. Maybe the mods should invite her to join us -- like Mars, archBOSTON needs women.

Ron Newman said:
I'd keep 133 Federal, too (but isn't someone planning to demolish it?)
Click to expand...

When they start to build the Tommy Tower, so no that building is safe for a looooong time.
R

OK, but wasn't it being emptied of tenants in preparation for destruction?

I might warm up to City Hall and State Service Center a bit if there was a way for them to engage the surrounding streets. The smaller-scale Brutalist buildings mentioned here and elsewhere do.

There was a poster here who worked in the building who said they were given an off property date and than asked to extend their lease, but a a lot of the tenants had already moved out already. I don't know if they tried to refill that space.

^ How would they do so? In theory you could bring the streets closer or build closer, but it diminishes the monumentality that makes them what they are.

Stray thought: I wonder how much of the warming to the State Services Center has to do with "The Departed"? It may have really helped integrate the building into Boston's collective consciousness. And it worked as a much more effective symbol in the film than the bludgeon-in-the-brain obviousness of the rat crawling in front of the State House.

The small-footprint structures will be left alone. The bigger ones can only survive with some good creative re-use.

I've mentioned before that City Hall can be turned into an art museum for showcasing a rotating array of Boston-area collegiate/university art collections.

The State Services Center could be re-used as a spaceport.

czsz said:
^ How would they do so? In theory you could bring the streets closer or build closer, but it diminishes the monumentality that makes them what they are.
Click to expand...

One way would be to open up wall where the buildings actually do meet the sidewalk.

A great place to start would be that God-awful brick wall on Congress St at City Hall.
(BTW: Does anyone know what is on the other side of that wall?)

I think there's some kind of parking / loading facility in there, unbelievably.

But beyond somehow replacing that awful brick, what would you do with the walls: insert stores? That would reduce their monumentality, too (and probably be seen as some kind of security risk by our overzealous gov't)

^^Wasn't there a rumor that original plans called for a beer hall in the building? That would be the perfect place for the entrance. And put in the hands of a competent architect (that chick the Beton Brut is always going on about? ) it could be done sympathetically.

statler said:
A great place to start would be that God-awful brick wall on Congress St at City Hall.
(BTW: Does anyone know what is on the other side of that wall?)
Click to expand...

Even the DOCOMOMO people sounded enthusiastic about adding retail to the streetscape there.

^^Wasn't there a rumor that original plans called for a beer hall in the building?
Click to expand...

Narragansett sponsored a Green Fest on CHP this summer, and used the mid-rise upper deck close to the north-side stairs as a beer patio - the proudest I've ever been of my city hall! I've been trying to find pictures, but no luck.
C

When they had the ramp and central courtyard open as a beer patio, that was so cool! Part of the problem with City Hall is that most of the entrances and central open spaces have been closed off due to security reasons. For example, there are stairs that go to the central courtyard on Congress St and a ramp to it from City Hall Plaza. Plus, there's the entrance to the building near the "stage" that's now an emergency exit only.

statler said:
(BTW: Does anyone know what is on the other side of that wall?)
Click to expand...


statler said:
Wasn't there a rumor that original plans called for a beer hall in the building?
Click to expand...

Not a rumor, a real plan. Kallmann and McKinnell referred to it as a Rathskeller.


statler said:
...that chick the Beton Brut is always going on about? )
Click to expand...

Beton Brut said:
Not a rumor, a real plan. Kallmann and McKinnell referred to it as a Rathskeller.
Click to expand...

And you know Boston could get behind a "restore the Rat" campaign!

Since Menino rooted the seediness out of Kenmore Square, I guess it will have to be brought back to him.

Zaha Hadid could probably do some amazing updates on Boston's Brutalist monsters.

I'd like to see Zaha do some smaller scale work as well. Maybe that parking lot on the corner of Newbury and Dartmouth Streets.

Arahuete does residences, but she understands concrete. Her old boss never got to work "big" like his contemporary, Paul Rudolph. I wonder if she could do it.

And on the topic of female architects, Jeanne Gang needs to be in the conversation. Aqua is stunning in its simplicity.

Yeah, I was thinking of Zaha.

Oh, I bet the Back Bay NIMBY groups would practically lick their chops at the prospect of attacking a Zaha building on Newbury.

I think the SSC and City Hall both require a lighter, more subtle hand than Hadid, or even Foster. These buildings need to be opened-up and made more engaging, but no so much that it detracts from what makes them so powerful. Maybe something along the lines of Anne Beha's quiet but effective renovation of the Mary Eddy Baker Library.
You must log in or register to reply here.
Share:
Facebook Twitter Reddit Pinterest Tumblr WhatsApp Email Link