Reminds one of the State Transportation Building. Saddle up the PF Chang horses!
S

tobyjug said:
Reminds one of the State Transportation Building. Saddle up the PF Chang horses!
Click to expand...

At least the Transportation Building is really brick... 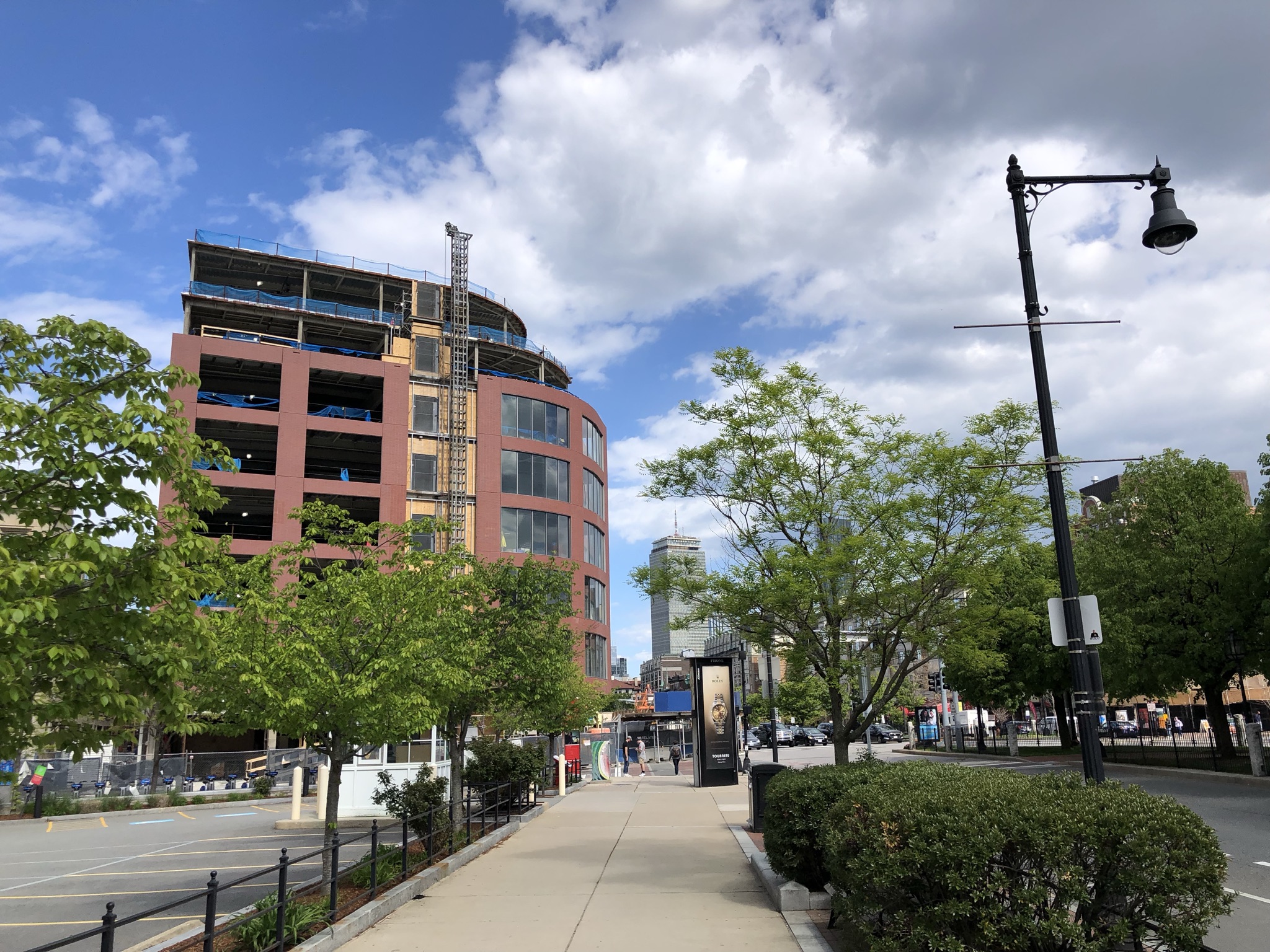 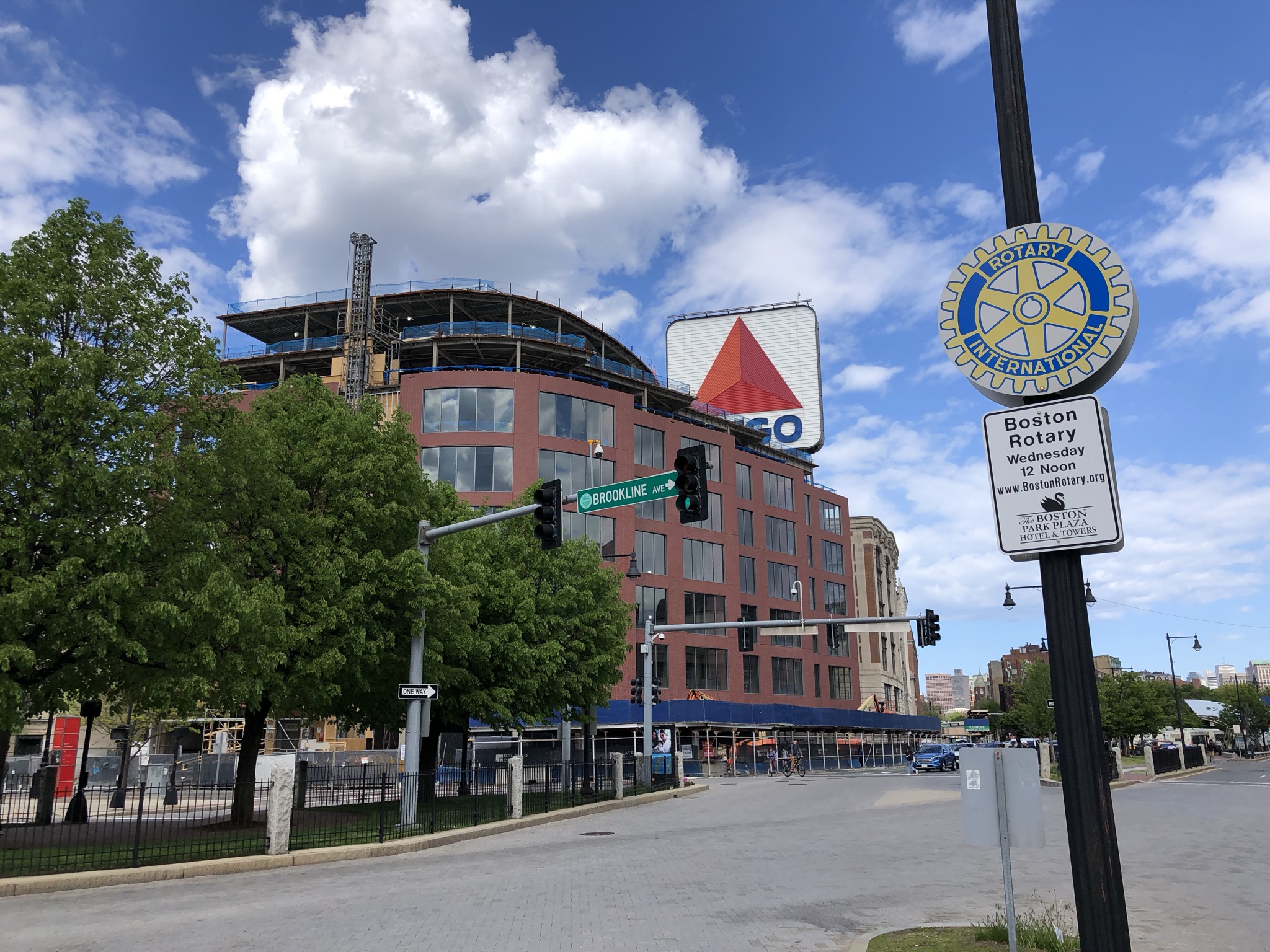 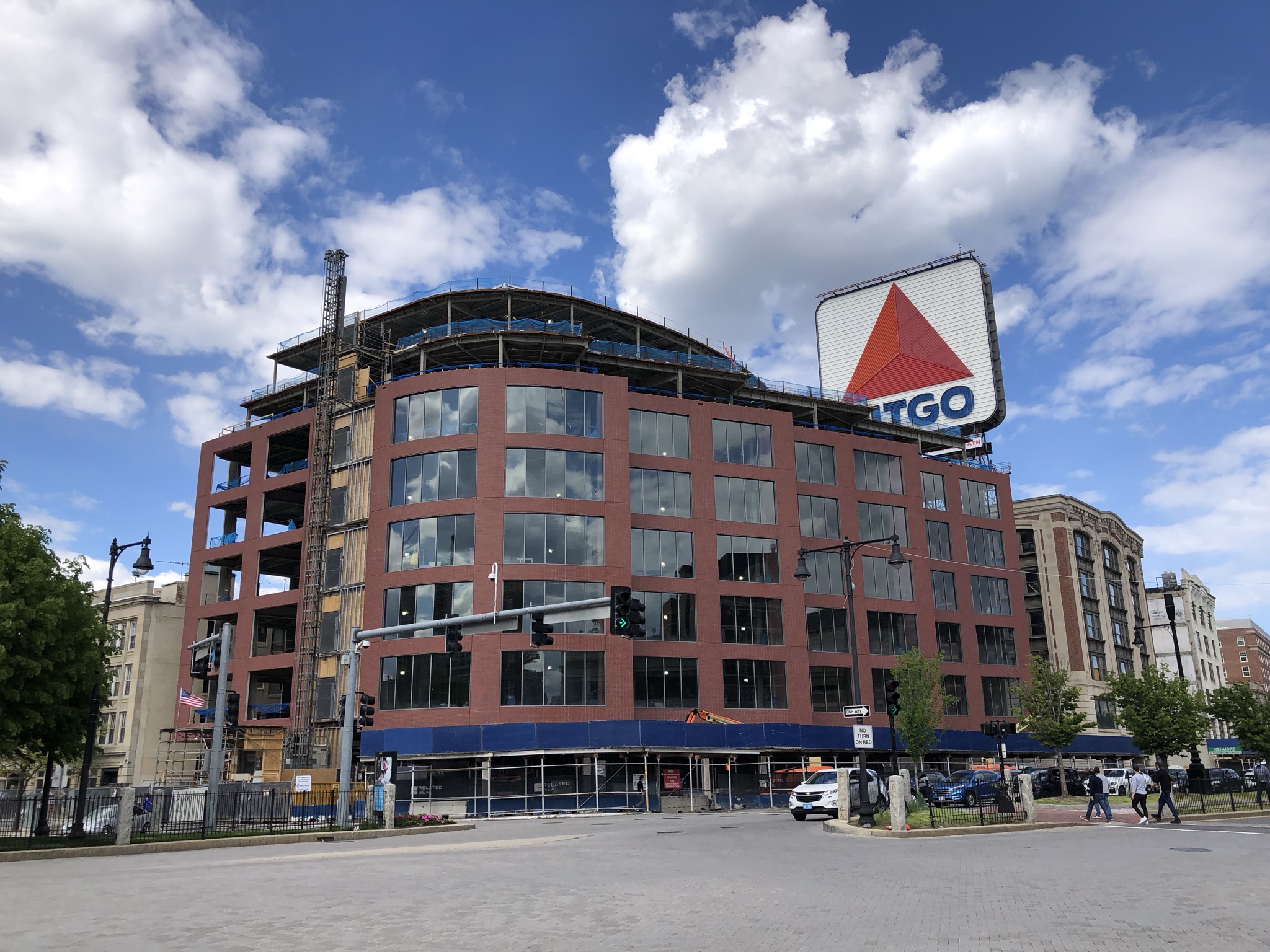 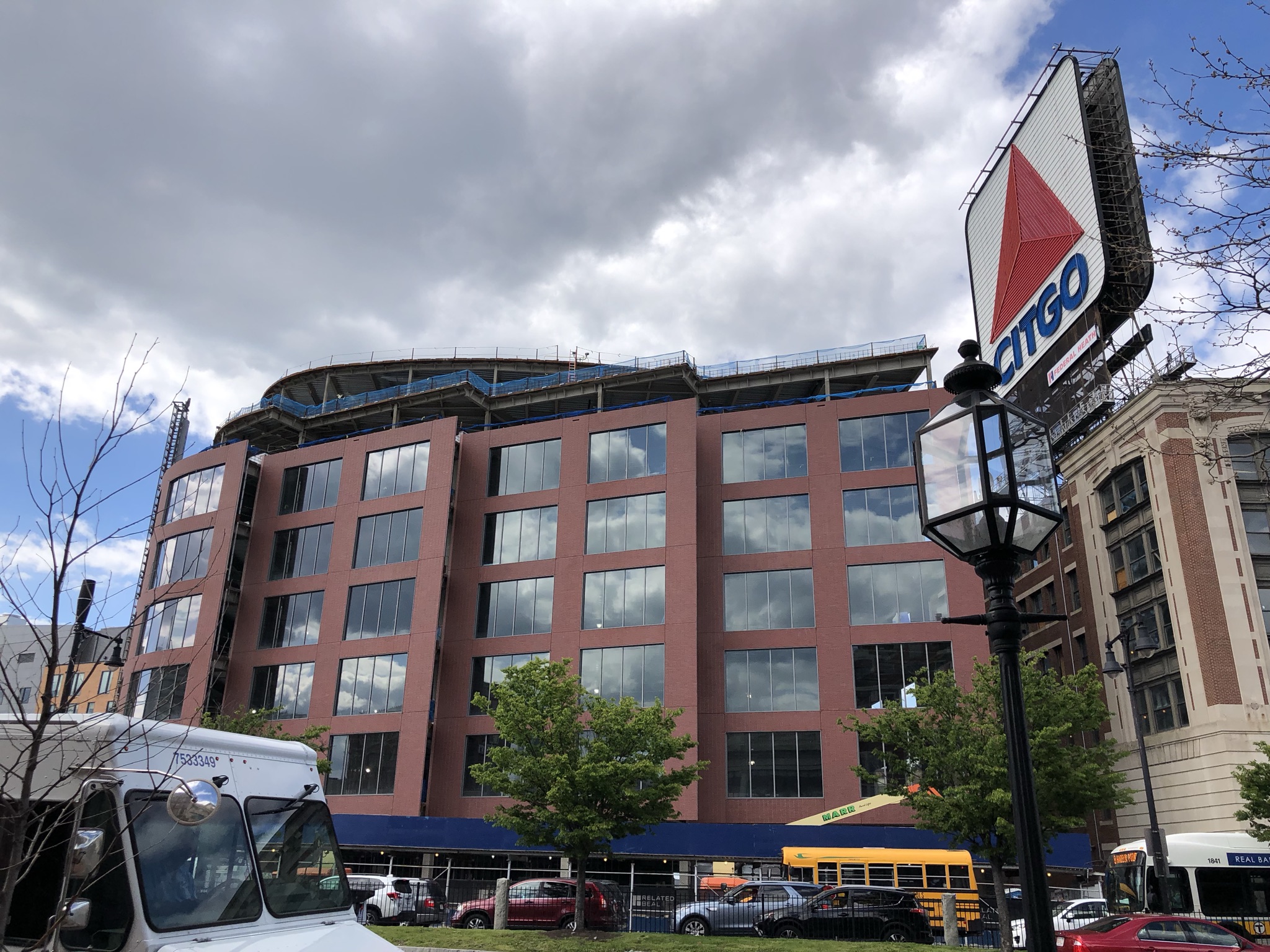 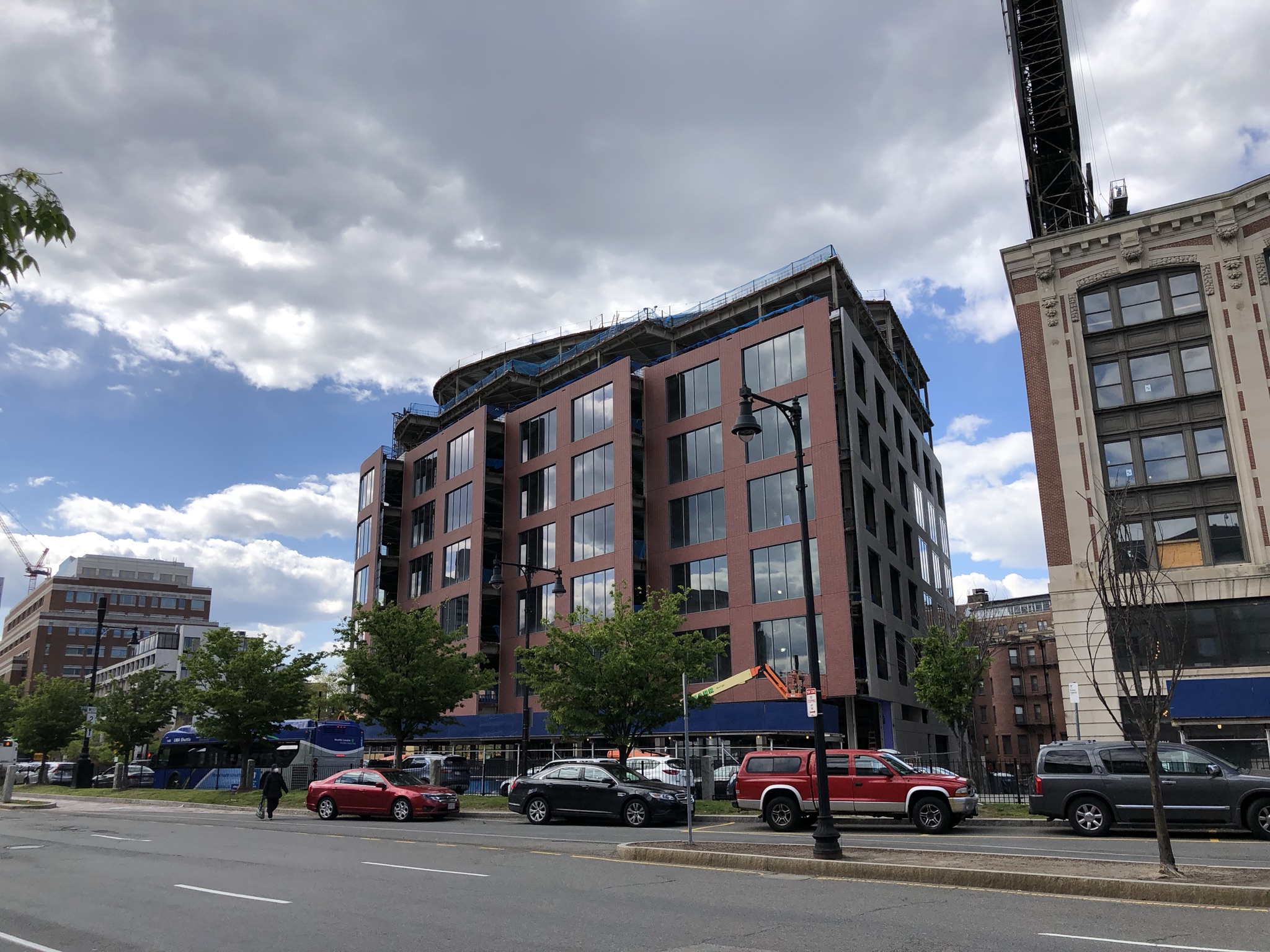 Such a total fuck you to Kenmore. The entire process needs to be obliterated, they should dissolve the BRA, the ZBA, and the BPDC, fire every single person, and rebuild from ground zero with no holdovers from any of these corrupt bodies.

This project makes a total mockery of the historical preservation laws. Either get rid of them or enforce them equally. Ugh.

Whoop's tenancy here re-opens the wound of the destruction of the West Gate building for me, because they're a tenant that absolutely could have coexisted with that building. Whoop won't need any fancy ventilation or plumbing for the work they'll be doing here; they just need more square footage of typical Class A office space. A renovated West Gate building tied into a new office building replacing the NESOP and Bertucci's buildings likely would have worked perfectly well for them.

Let this serve as a periodic reminder that not every growing company in Boston needs lab space. I get that it is prudent for developers to build in a way that could accommodate lab space in order to keep their options open, and also to potentially land higher rents. But plenty of "lab spec" development ends up getting filled with, more or less, regular old office users. Despite the "lab lab lab" narrative we see this happening all over: in Kendall and Cambridge Crossing and Boston Landing and now Kenmore and probably in plenty of other places I'm not thinking of. It'll be interesting to see what percentage of the current pipeline of lab buildings gets filled by lab tenants vs. traditional office tenants.

I have no problem with putting up lab buildings to serve as lab buildings. Labs are great and tremendously beneficial for society! I want to have as many labs in Boston as the market can support! But form follows function, and the specific form that follows lab's function sucks. I'll accept that form if it's actually being put to laboratory use, but if it's just being used for cubicles and desks then I want a new form!
M

Plus is that it blocks the Citgo sign from some angles (would be better if it blocked more of it), but it also looks like a medical building you'd see in Dedham.
X

Life Coach Mike said:
Xec: I agree completely and have been following the fate of Boston trees for 5 decades. The streets of Boston and beyond used to be covered in American Elms and and many Black Walnut trees. We all know what happed to those. Bugs and fungus killed them off and denuded many of Boston's residential neighborhoods, the ?Common, and certainly nearly all suburban main streets. Then was a time when Linden trees were the rage (the kind at the Christian Science Center). They could be trimmed and were very hearty against winters and salt and smelled great in the spring. But they gave off tons of sap (all over cars parked under them) and were prone to a terrible fungus. Then came the great London Plane Tree efforts (the kind that used to grow in Copley Square and along the street of Govt. Center). They had a short life due to mildew disease and also dropped a lot of messy leaves. Good-bye Plane trees. Then there was the Bradford Pear Tree phase, which were hearty and flowering, small and compact. But they were discovered to be invasive, non-native to NE, smelled poopy when blooming, cross-pollinated with other species, and an environmental problem. Good-bye pears. Then the Locust tree phase (as seen in Quincy Market). These grow very large, have small leaves that are more manageable to sweep up, and resist pollution. But they seem to be better suited for off-street planting where the branches can spread without having to be pruned back. And of course we can't forget the huge efforts made by Menino to plant street trees all over the city. I watched as openings were dug in all the sidewalks and many of the holes never got a tree. Sidewalks were often too narrow and trees robbed people of easy access. And then about half of the new trees that actually got planted were put in the shade of buildings and were not happy.

Narrow streets/sidewalks, snow, ice, salt, lack of water, impaction of the tiny earthen areas around roots, vandalism, trucks breaking branches, and leaf accumulation in gutters and sidewalks (causing a slipping hazard)...this and more have conspired to kill Boston's street trees before they get a chance to thrive. Oddly enough if you look at old pics of downtown, aside from the Common and Public Garden and parks around the city, there were very few, if any trees on the sidewalks and streets. (Whoever came up with the idea to put trees in front of Faneuil Hall didn't think ahead to when they would get large, block the view, and attract lots of pooping birds. Now they are all gone, cut down ignominiously through the years. And don't get me started with the use of rounded cobble stones as a great pavement for walkers!).

The idea for street/plaza trees, IMO, came about in part as a way of making large, open plazas more acceptable to the public, as many newer buildings manipulated the system to build tall by creating useless voids around their base (aside of lunch time crowds in good weather who hangs around these plazas, that often have no where nice to sit and have been marred by the grease used by skateboarders?) I'd rather have no trees along most streets and just have sidewalks that aren't tripping hazards. Beacon hill has done just fine. The Back Bay's residential streets are an exception. But not every section of commercial Boston can look like the Back Bay.
Click to expand...

Hi LifeCoachMike, thanks for that detailed and informative explanation. I never realized trees lived such a hard life in Boston or that they created so many problems of their own. Maybe aB can start a campaign to persuade the city to offer tax breaks and other incentives to the biotech companies setting up shop in Fort Point and the MIP if they put some effort into solving Boston's tree problems, such as the bugs and fungi.
D 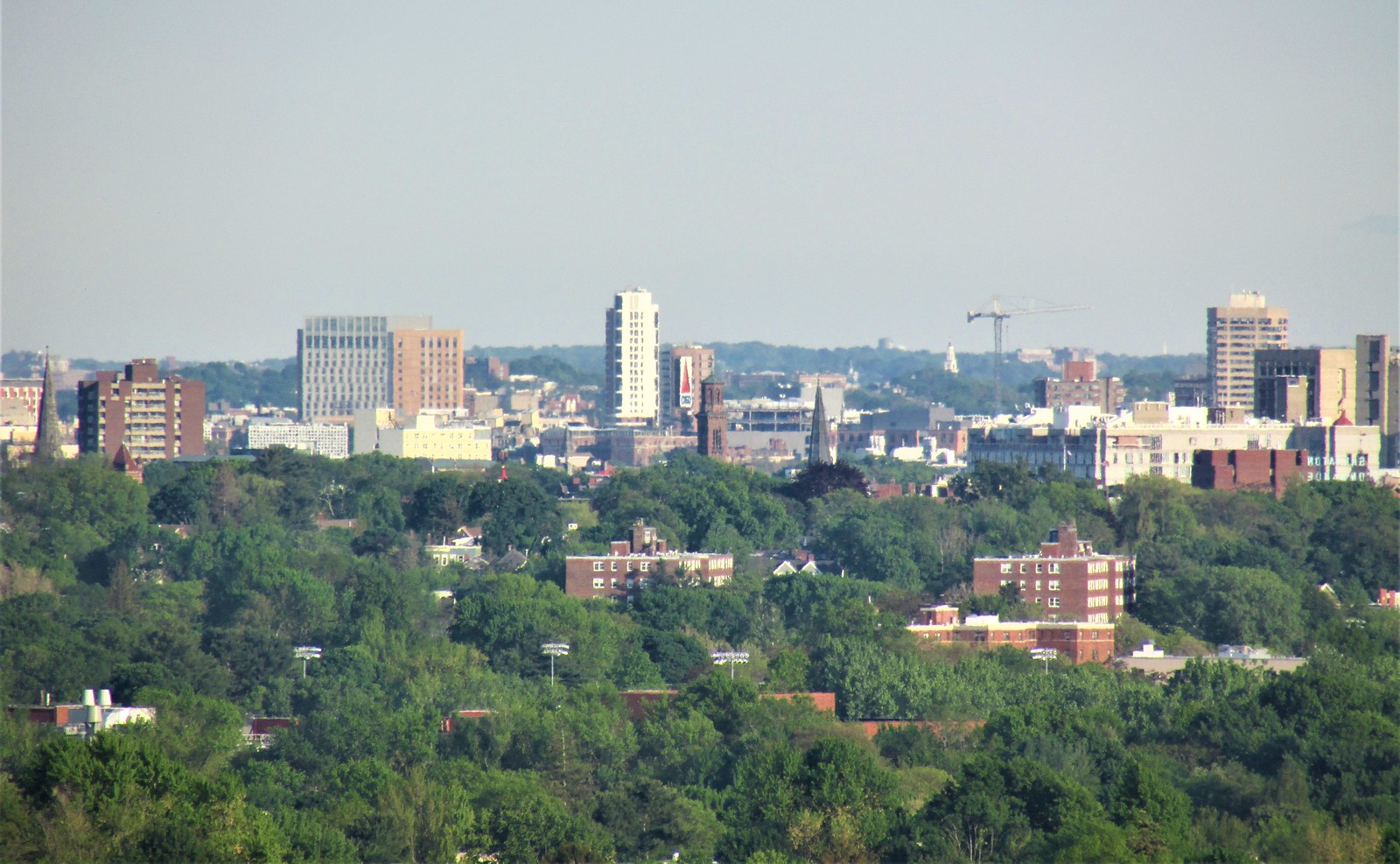 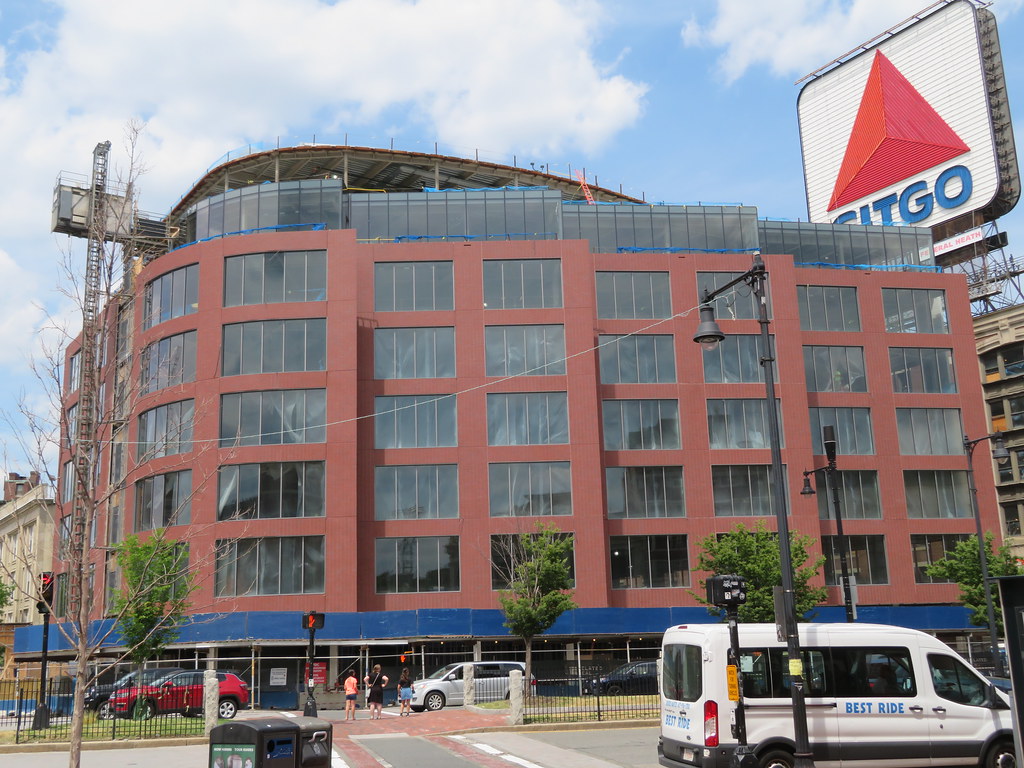 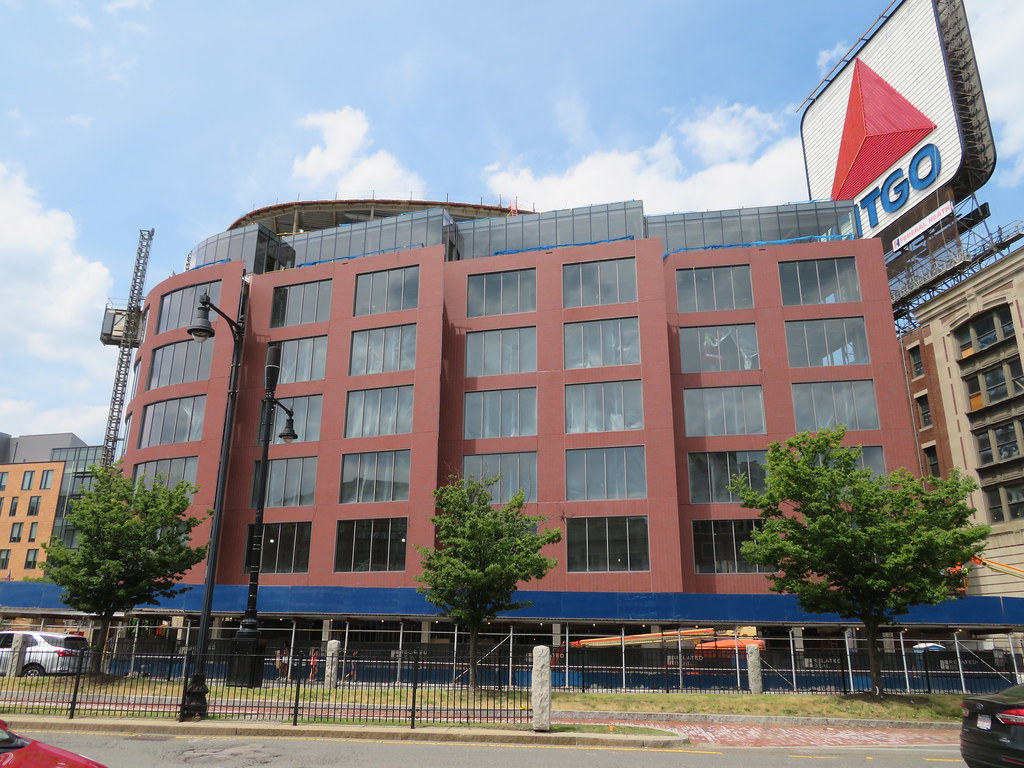 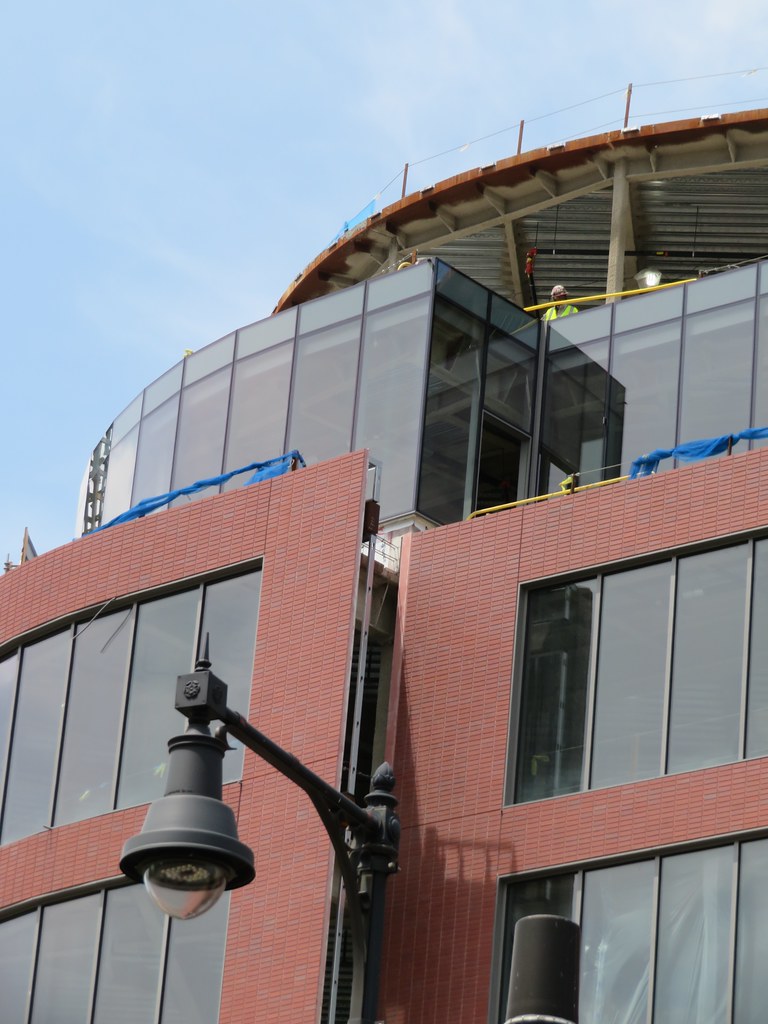 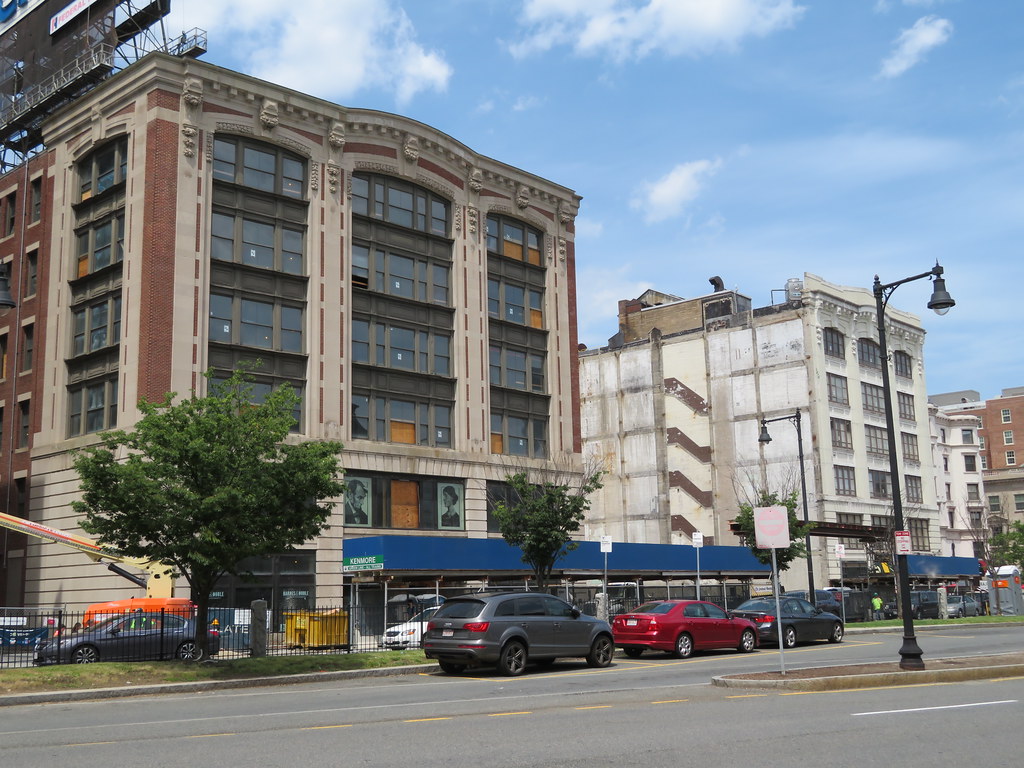 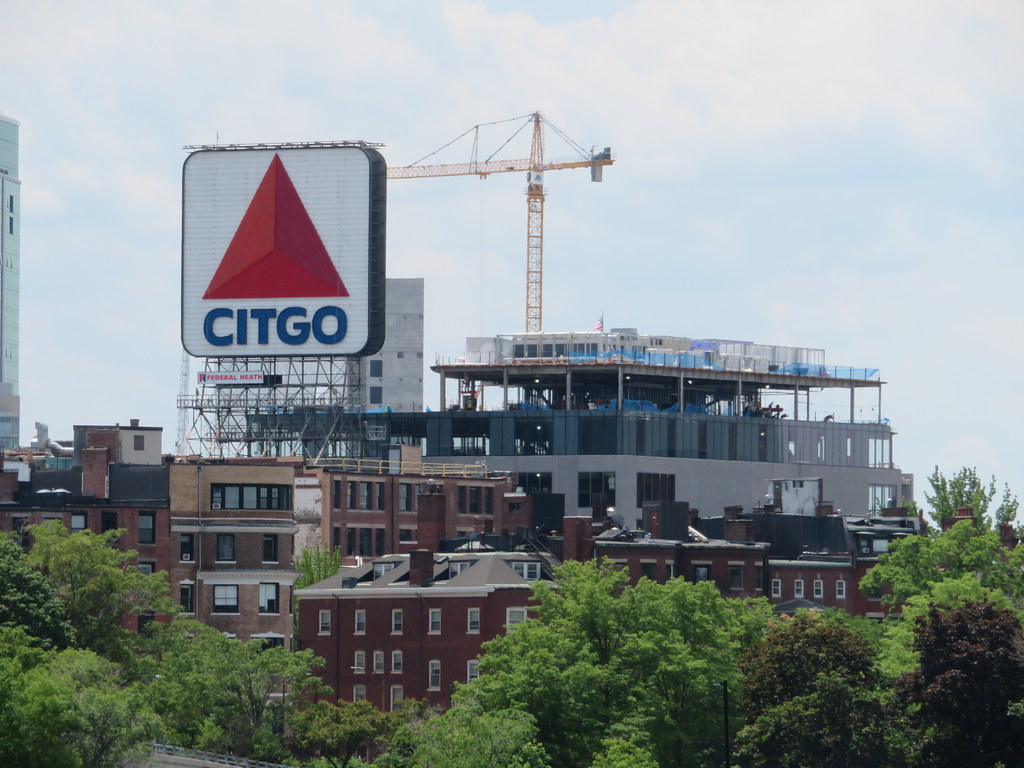 I am going to cry

I just can't get as worked up about this as most of you. To me, the worst thing about this development (by far) is still the loss of the West Gate building. The new building is bland and sterile, sure, but hardly offensive. If West Gate had been saved I don't think I'd have any qualms about it at all.
F

Wet cardboard cutout of a building. That vibe is strong with this one.
3

Poolio said:
I just can't get as worked up about this as most of you. To me, the worst thing about this development (by far) is still the loss of the West Gate building. The new building is bland and sterile, sure, but hardly offensive. If West Gate had been saved I don't think I'd have any qualms about it at all.
Click to expand...

Yea this, too many emotions tied up in this project. I think it's totally inoffensive as a structure... it just is, it's not going to win any awards for best or worst architecture.

People need to get over Kenmore, it's been fucked for almost 20 years now and it's never coming back.
J

Looks like they forgot to leave any value after the value engineering.

What we we just ignored this until we can get a completed nighttime shot with the windows illumined. And then put the whole mess out of our minds. (sorry to those who must traverse the square.) Maybe the planned tower will wash away this nightmare (or create total psychosis if it gets VE's to death).

393b40 said:
it's not going to win any awards for...worst architecture.
Click to expand...

I wouldn't be too sure.
F

Blackbird said:
I wouldn't be too sure.
Click to expand...

I think aB is ready, willing, and motivated to waive the 5-year waiting period for the Hall of Shame on this one. Generational anti-talent we got here.

F-Line to Dudley said:
I think aB is ready, willing, and motivated to waive the 5-year waiting period for the Hall of Shame on this one. Generational anti-talent we got here.
Click to expand...