Perhaps for the best. Maybe they can go back to the drawing board and redesign it to provision for a 3rd track.
S

PAWTUCKET — When commuter trains running from Boston to Providence start stopping here on Monday, they will do more than just offer a new option for travel.

They will also begin reshaping the economy of Pawtucket and Central Falls, which is about two blocks from the new $63 million station.

In fact, officials in the area say that just the promise of the trains has already changed the face of the two cities.

"Within the past few years, hundreds of new apartment units have been constructed in the areas adjacent to the station in anticipation of its opening," Pawtucket's Planning Department told The Providence Journal, adding that several hundred more are under construction or on the drawing boards. "The influx of new development and residents spurred by the train station is helping to bring to life areas of Pawtucket which have been traditionally under-invested and underutilized."

This will be the fourth train station in downtown Pawtucket. The first two stations were near the intersection of Broad and Exchange Streets along a stretch of track that had several at grade street crossings in the city center. The tracks were eventually moved a bit to the north and sunk for much of its path (same route today) through the city in 1914. A grand new depot with parts of it in both Pawtucket and Central Falls was then constructed further north on Broad Street in 1916. It was an over 30,000 square foot brick and granite beaux-arts style structure that sat above the tracks that are now known today as Amtrak’s Northeast Corridor. The station had two levels; the upper level housed the 96’ by 64’ waiting room along with a barber shop, restaurant, ticket office, and baggage areas. The lower level had the outdoor track area with two island platforms providing access to all four tracks. Some 140 trains a day stopped at the new station with an average of seventy thousand passenger departures a month. The station however began to decline in time as less people used the train for transportation with the rise of the auto and it was closed in 1959. It still sits empty today further deteriorating with time. Its location on a bend in the tracks no longer meets station site codes. That along with prohibitive renovation costs necessitated building the new station just a bit to its southwest.


The four train stations in Pawtucket since the 1850's: 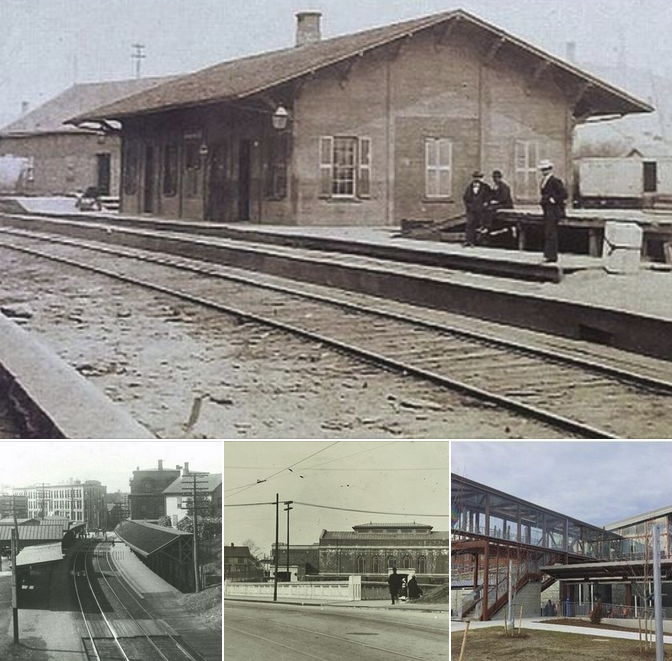 The official 10am opening drew a very large crowd. I posted more about it along with photos on the station thread in the Providence and Greater RI Forum:

And they couldn't have asked for better weather... ;)
archboston.com
S