This is a different site from the one that we've discussed before. That one is on the pond to the south of the station.

I like it and it's a huge improvement for the area, but I wish the "autocourt" could be tucked away in the back against the tracks somehow so the street wall would be unbroken.
S

Awesome. Stuff like this is the bread n butter. The big tall shiny stuff downtown is great, but developments like this can be just as important. Dense, transit oriented development on underdeveloped parcels. Its no 1 Bromfield, but this is going to affect regular people by housing them and adding to their community. Theres PLENTY of room to adds loads more too. Great to see. 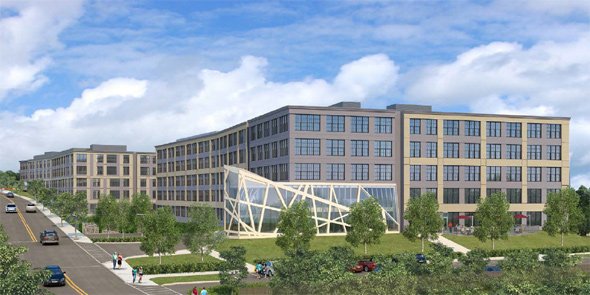 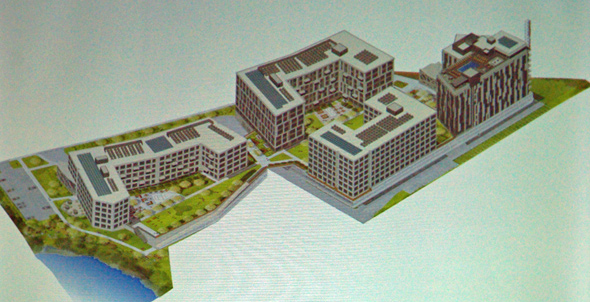 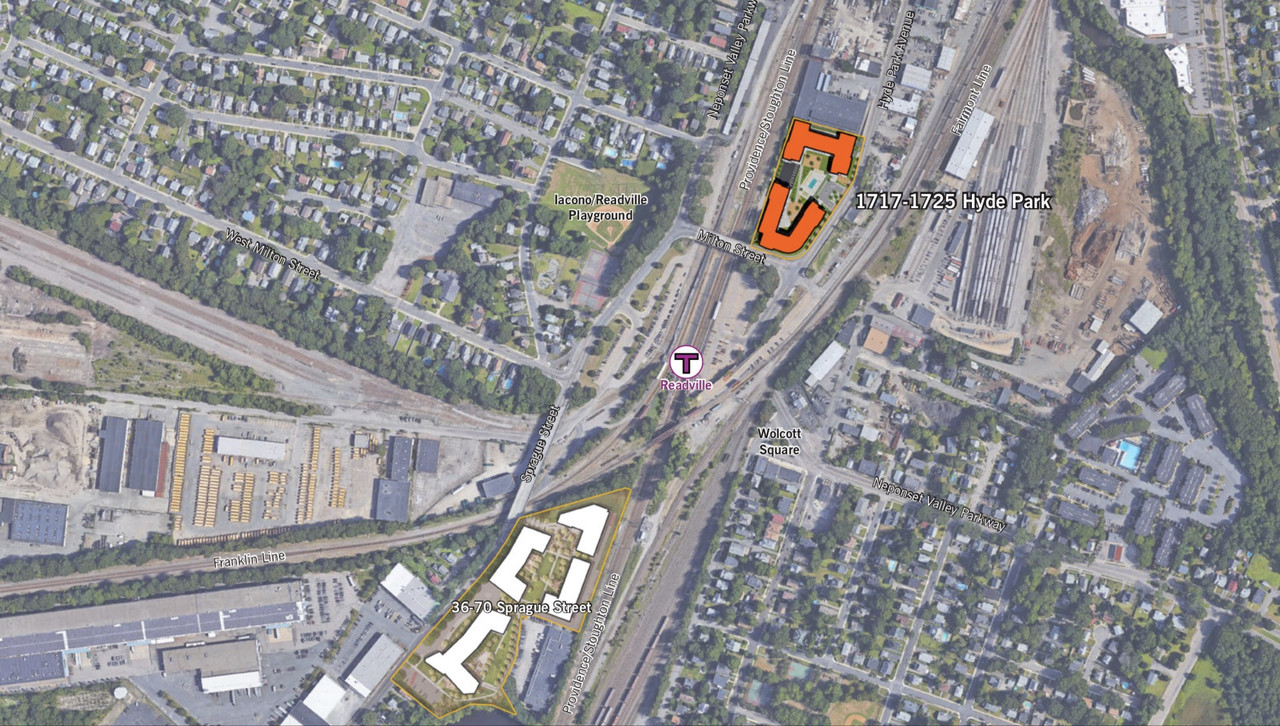 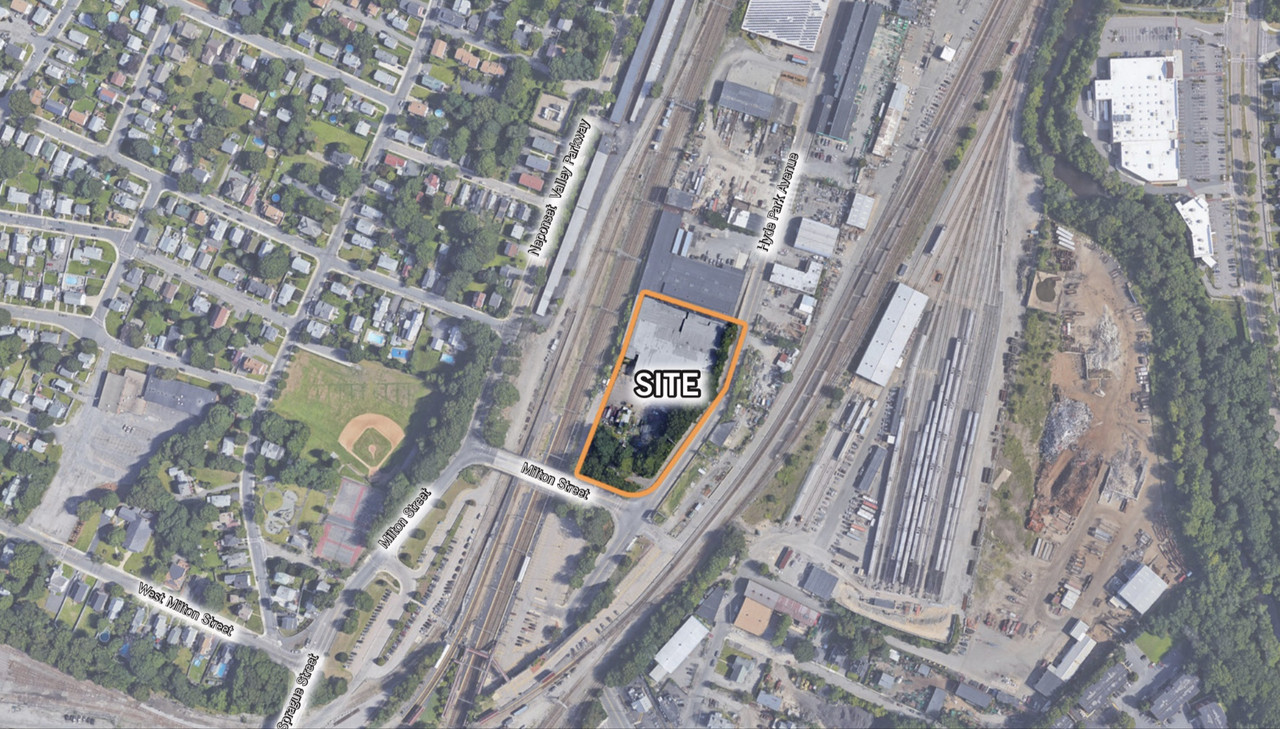 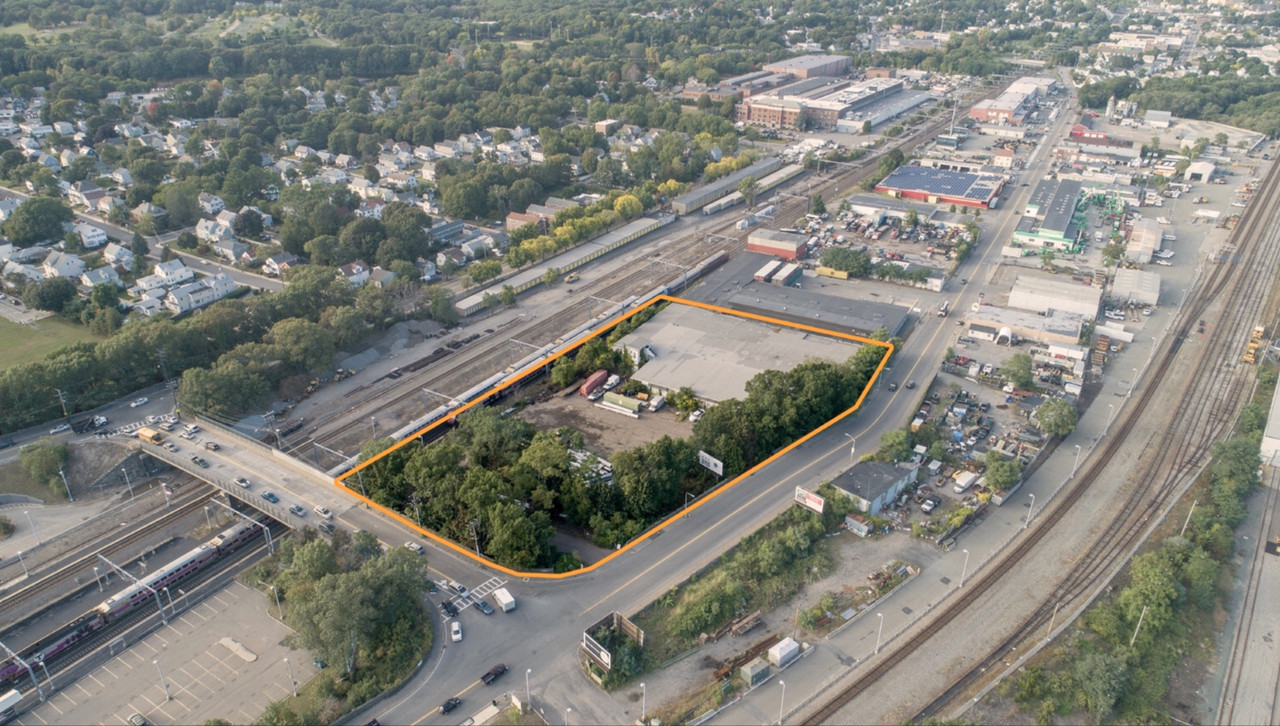 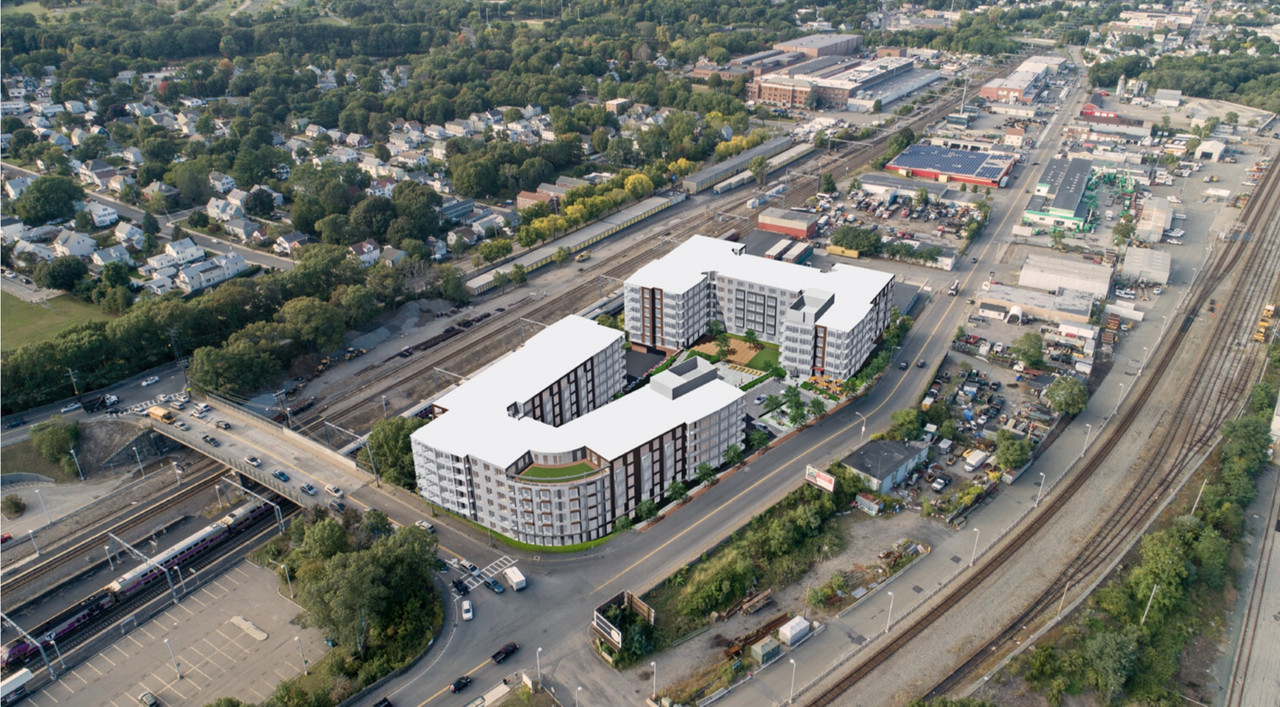 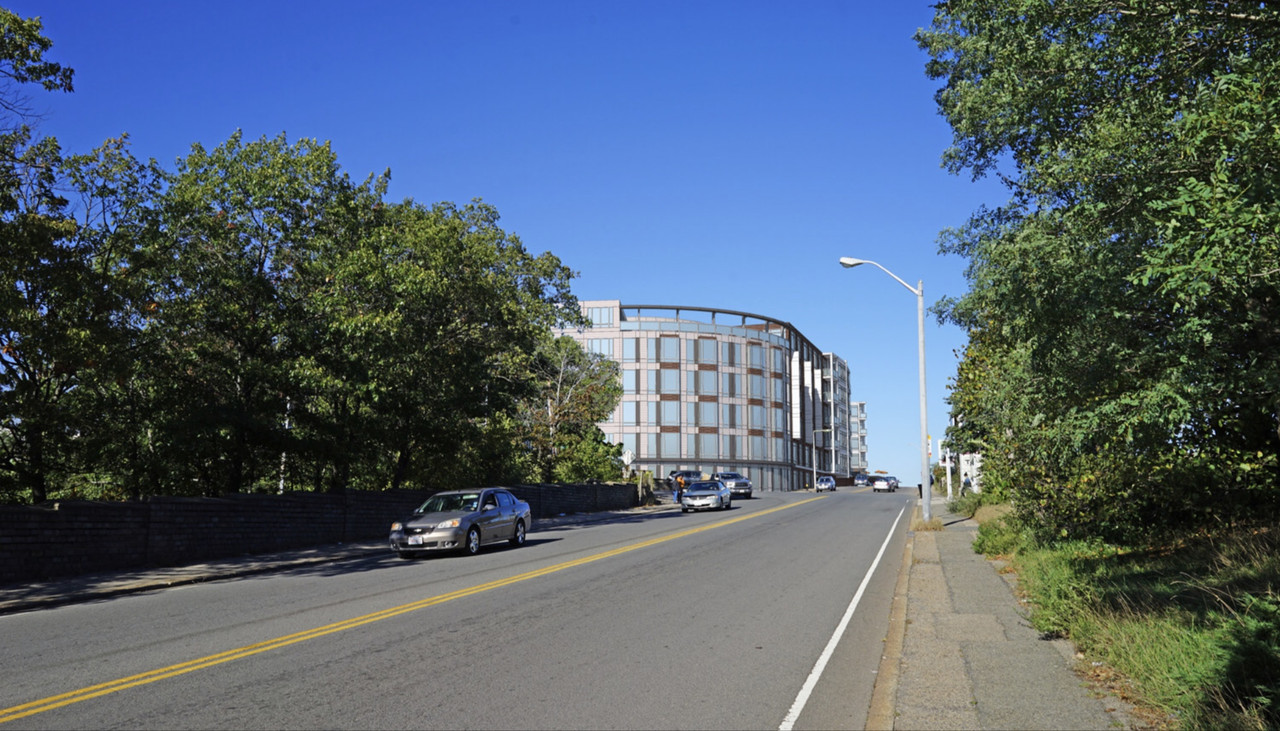 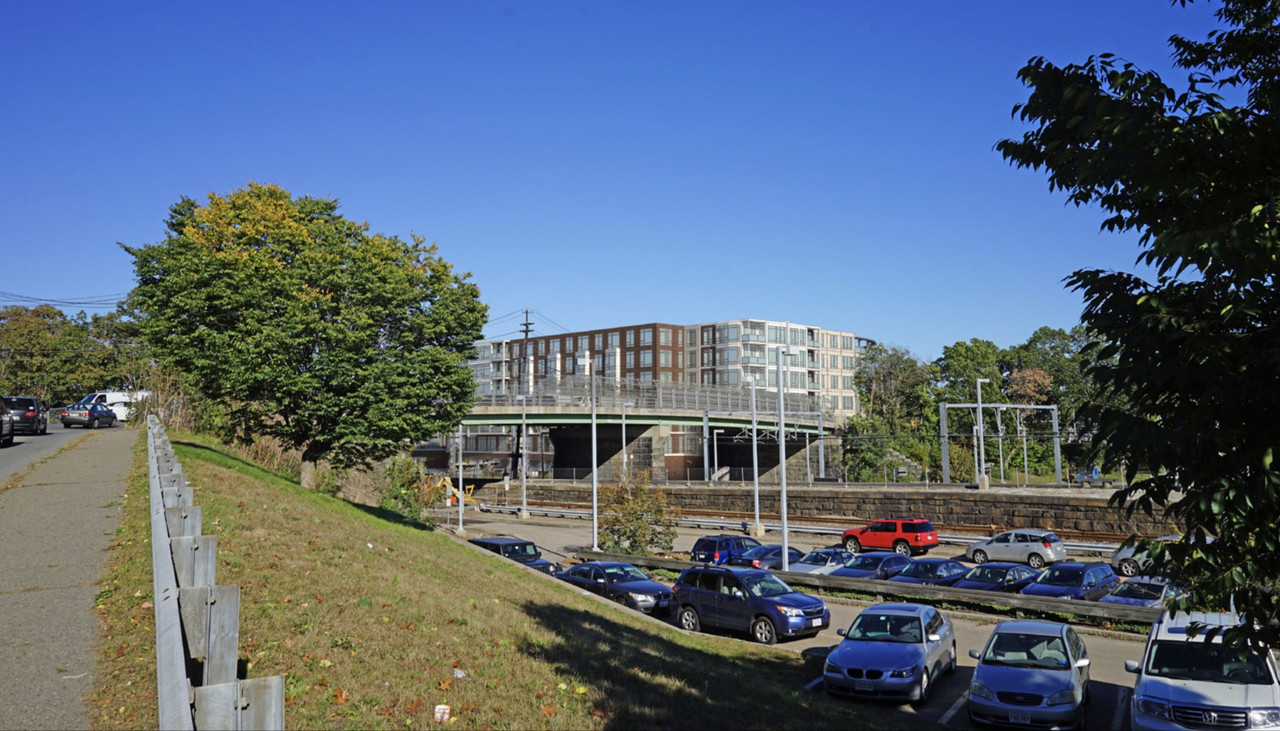 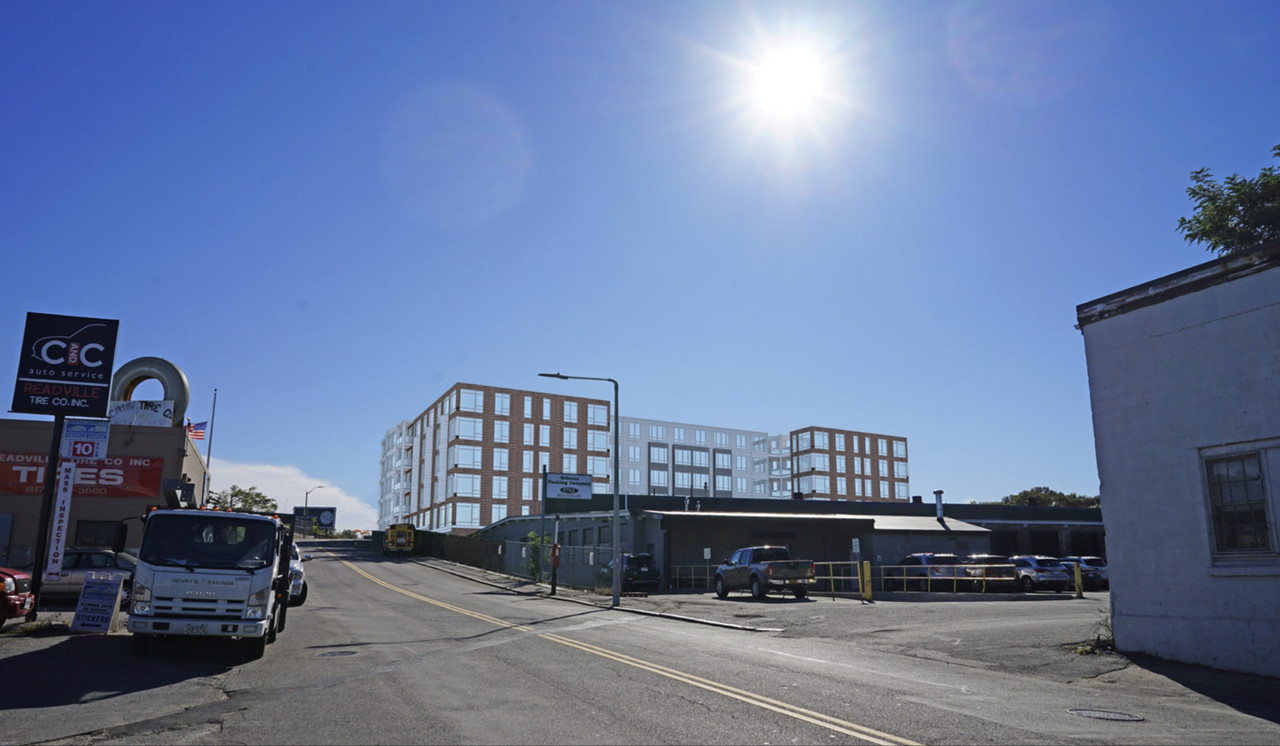 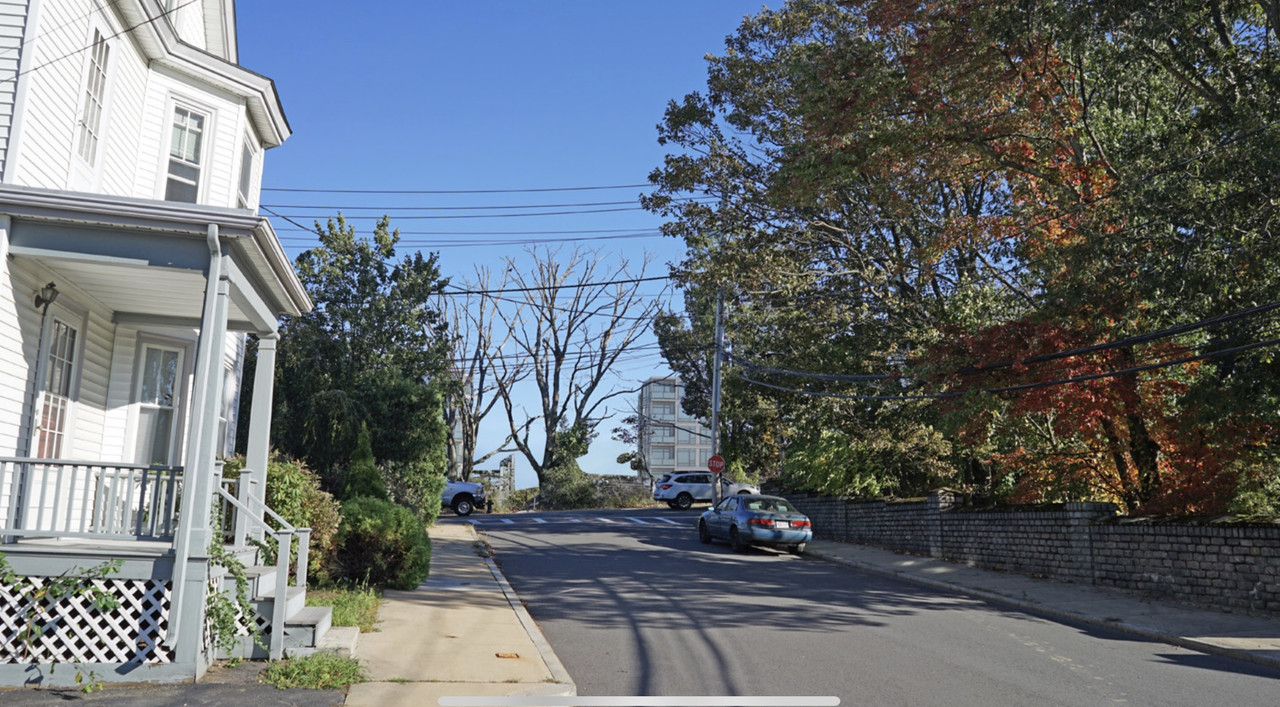 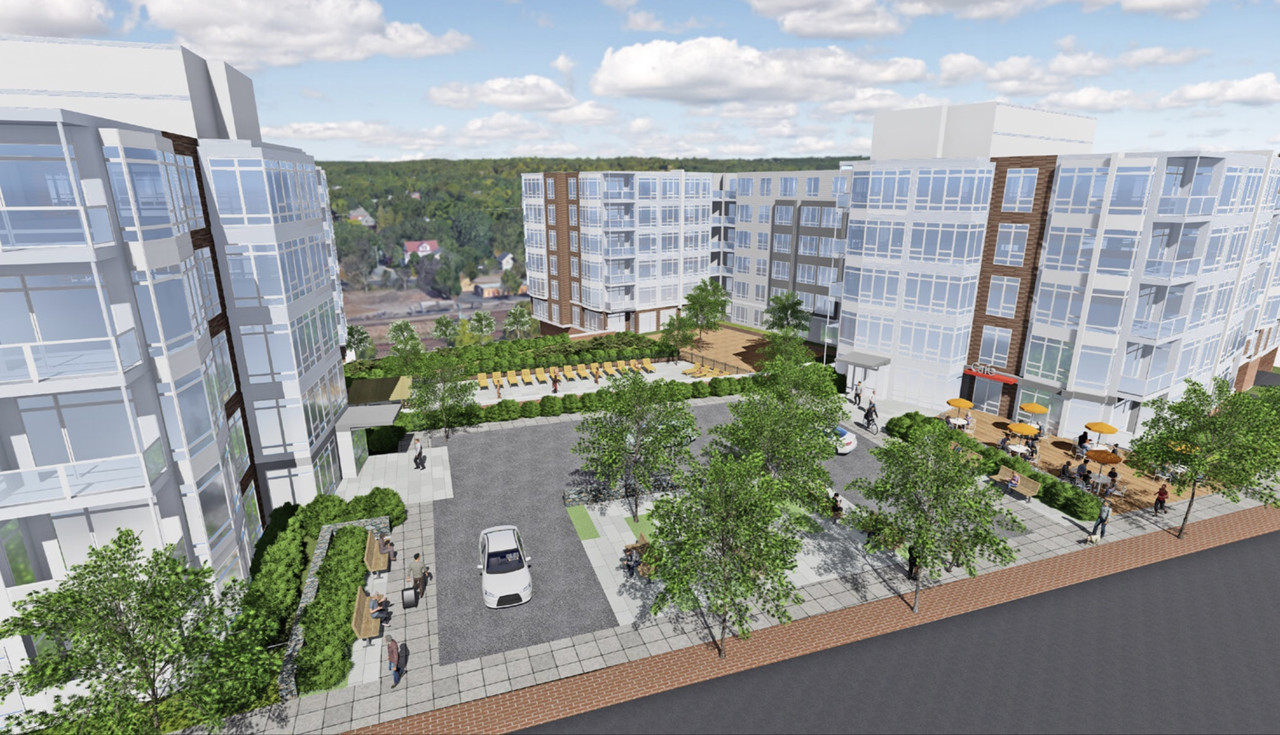 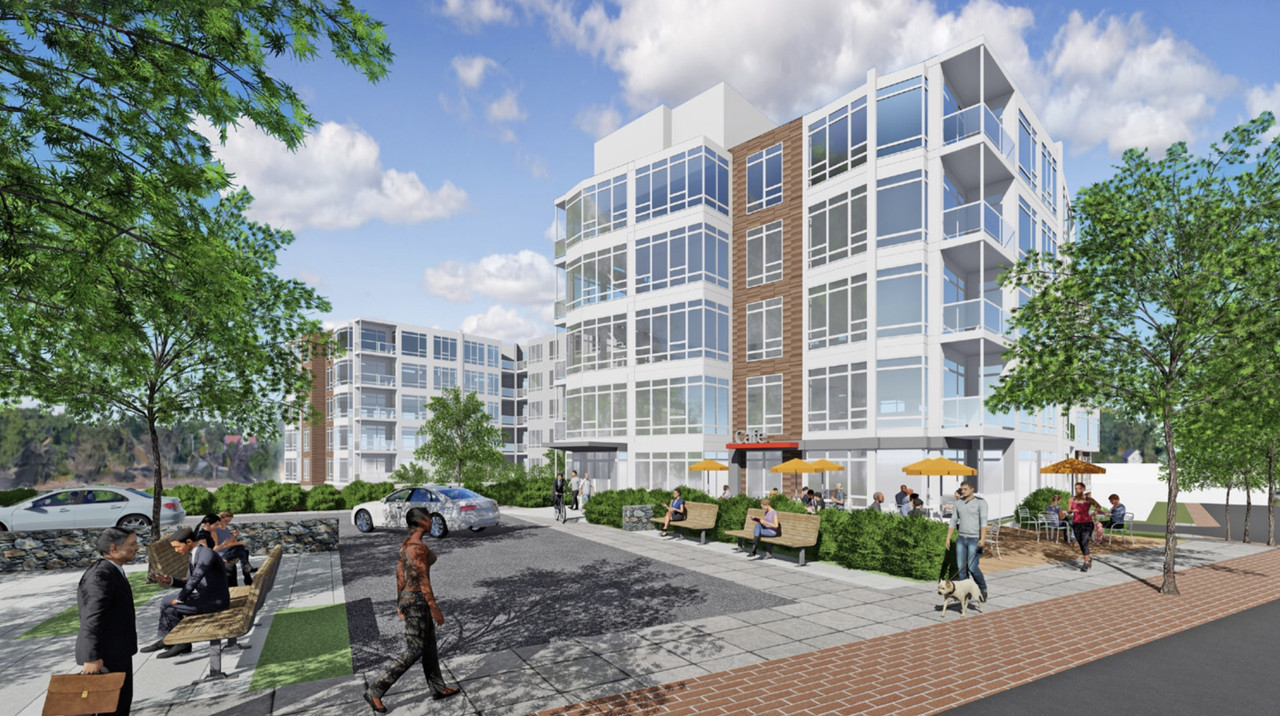 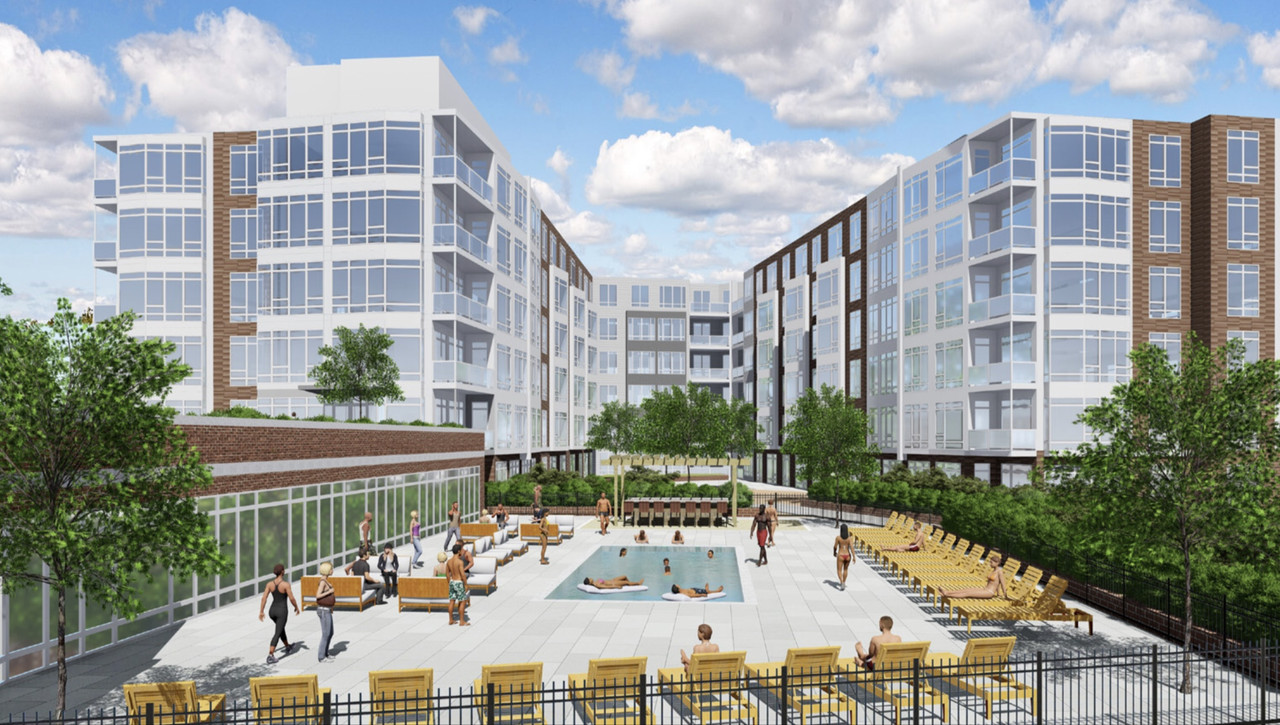 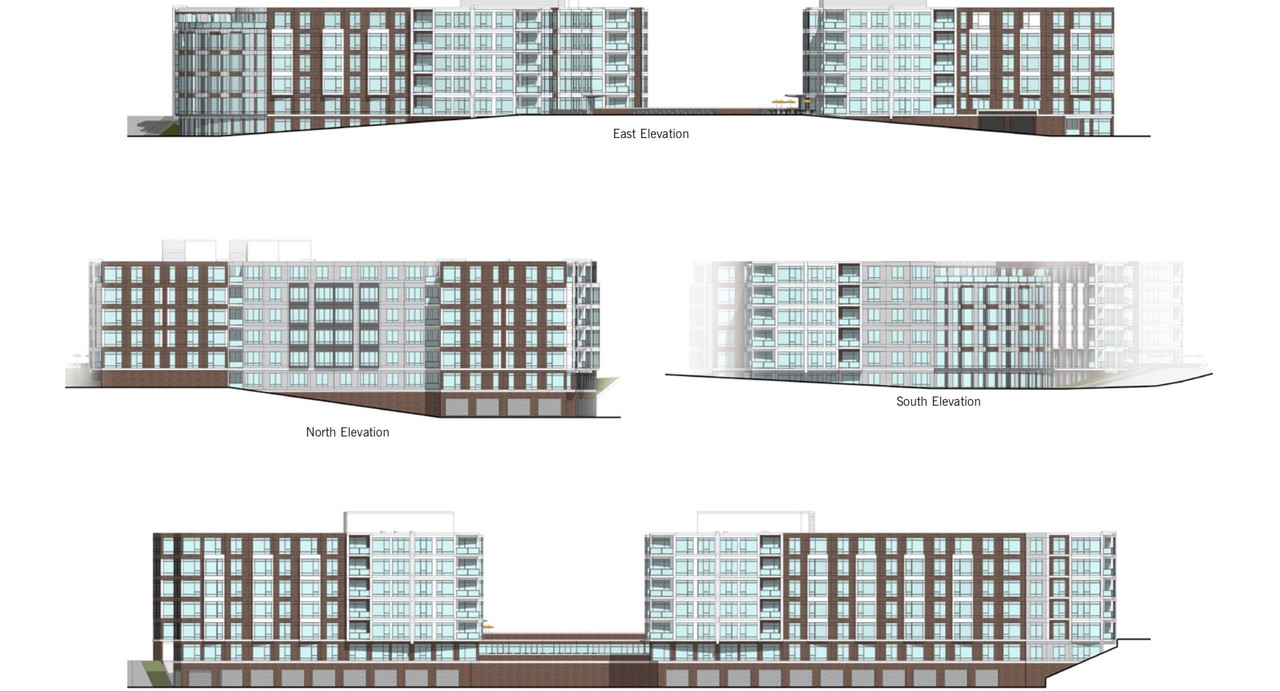 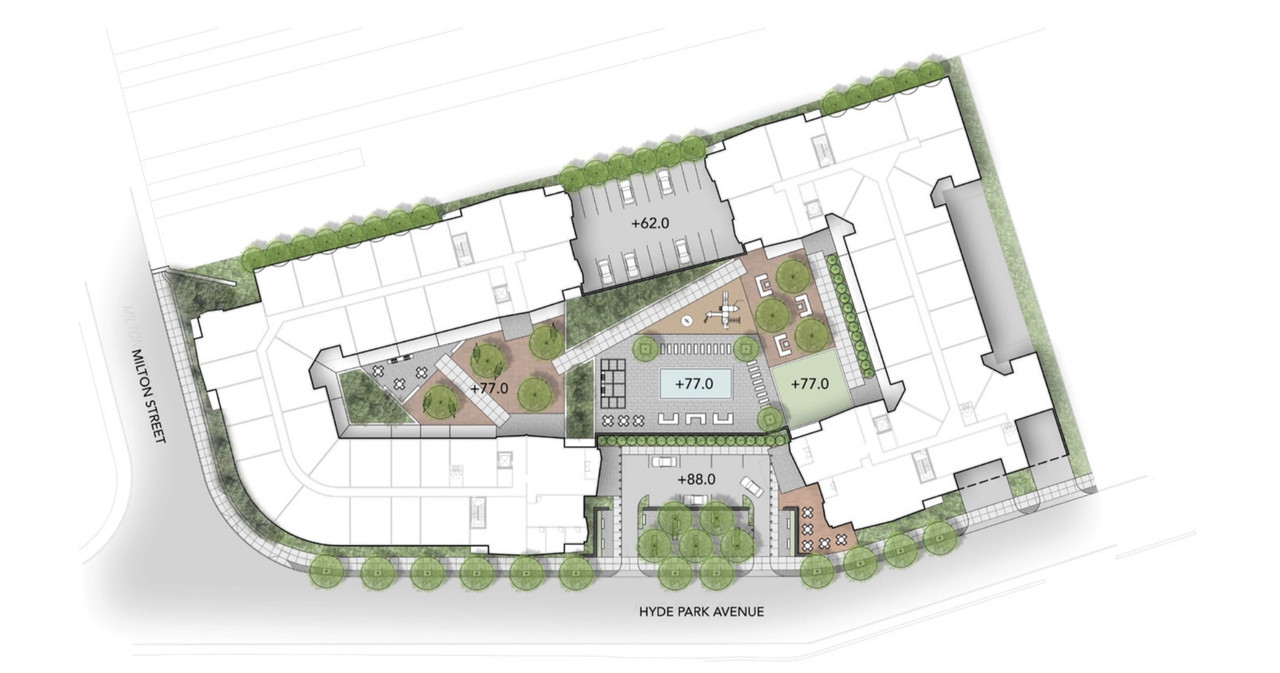 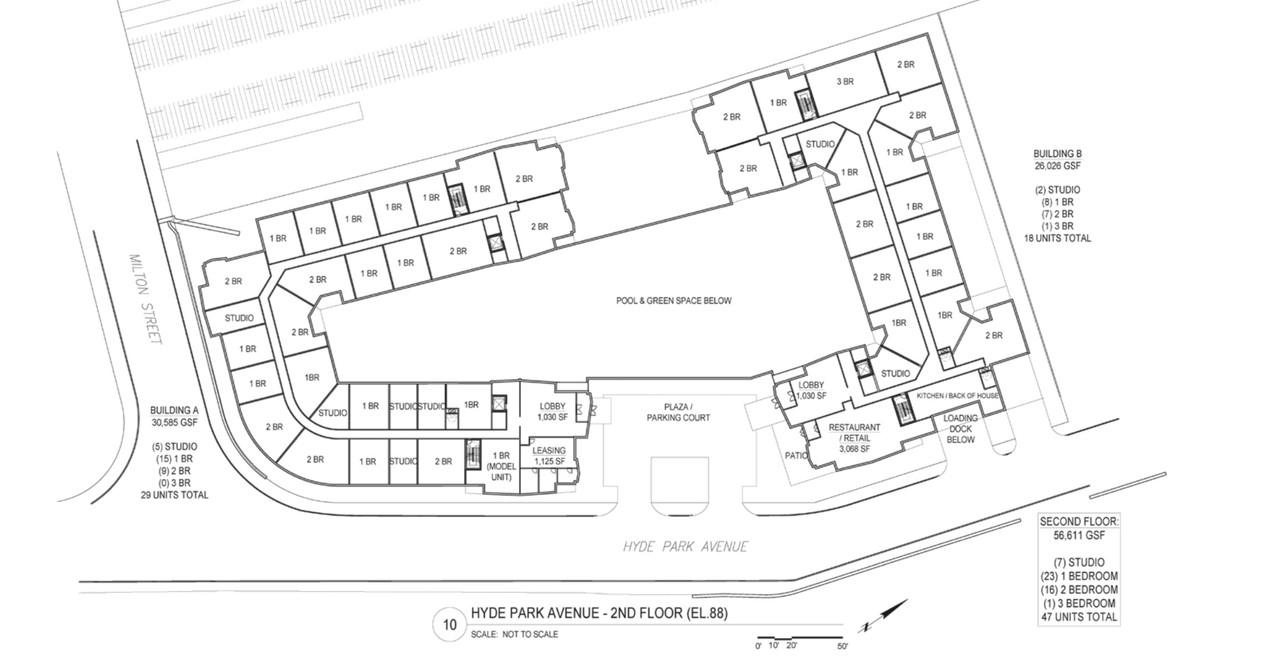 Change is scary. Not matter what it is.

Jeez, people! They're building these apartments in the middle of what looks like industrial crap, railroad tracks on one side and a busy roadway with more crap and train tracks on the other side, not in the middle of your neighborhood. And as far as Dedham having any say in this...you have no say, deal it with, not your problem!

atlantaden said:
Jeez, people! They're building these apartments in the middle of what looks like industrial crap, railroad tracks on one side and a busy roadway with more crap and train tracks on the other side, not in the middle of your neighborhood. And as far as Dedham having any say in this...you have no say, deal it with, not your problem!
Click to expand...

While this is all true, it is only a few blocks from more neighborhood-like stuff in a couple of directions. It also sits astride a notorious traffic bottleneck. People are probably somewhat reasonably concerned about traffic. I support this project, but I can understand why somebody living within a certain radius might not.

If they were up in arms about the continuing proliferation of fast-casual-architecture I would be right there with them. Otherwise, the traffic study will happen and all will be proven out. Its ok people, you can go back to your homes without fear.

cca said:
If they were up in arms about the continuing proliferation of fast-casual-architecture I would be right there with them.
Click to expand...

Calling upon your industry knowledge, can you help us understand why these designers have parked a faux-Libskind pavilion/atrium (?) in front of an ersatz-industrial building? Is that supposed to be visually interesting?

cca said:
Change is scary. Not matter what it is.
Click to expand...

This. I don't know if it was this article or something else (I'm not going back through to find it), but one of the local residents actually used the word "scary" in reference to development in the area.

Beton Brut said:
Calling upon your industry knowledge, can you help us understand why these designers have parked a faux-Libskind pavilion/atrium (?) in front of an ersatz-industrial building? Is that supposed to be visually interesting?
Click to expand...

Trendy is trendy. It will look good on Instagram.


Actually, to be perfectly honest, this is what I think:

Client: We need some Wow Factor (they all say wow factor by the way) but we cannot spend a lot of time at this point in the project. Can't you just whip up something that looks innovative and dynamic?"

Senior Designer: "Got it" (turning to the junior designer) "put something there that is edgy and expressive"

Junior designer "I saw this thing on ArchDaily ... its about the right size and its pretty zoomy"

This is the exact type of development that needs to happen. Dense, transit oriented, but farther out from downtown allowing cheaper land. Infill like this needs to be happening all the way from the Seaport to Dedham. This is the definition of NIMBYism.

These people agree that prices are getting out of control, but when housing that is capable of putting sizable dents in the middle class shortage are proposed theres pushback. This is exactly what the type of development we need to house the middle class looks like. This needs to be championed. I think part of it is people just don't know. They probably see this and think its just a build up towards luxury condos encroaching on their neighborhoods and eventually pricing them out. Not many people are up to speed on development the way we are so I think they just instinctively push back when they don't understand. There needs to be ways to get the message out, because its going to take a few hundred of these to reach the targets were shooting for. Boston is projected to reach a population of 724,000 by 2030 and 801,000 by 2050... all of that housing has to go somewhere and empty lots near transit is where.


This and 36-70 Sprague are great starts. Then theres quite a few more lots in the direct vicinity as well that are going to have to come next. Its unacceptable to have land like this around train stops and all of these in the metro area are going to have to be filled in wherever they are.

There is sooooo much available land here near transit. These are the types of development for the infill of the 21st century. This can bring lots of walkable retail for these residents that already live by here too. With those two alone adding 826 units, theres room here to have in total at least 2,400 units here within walking distance to transit, and added retail as well greatly adding to the walkability of the area. 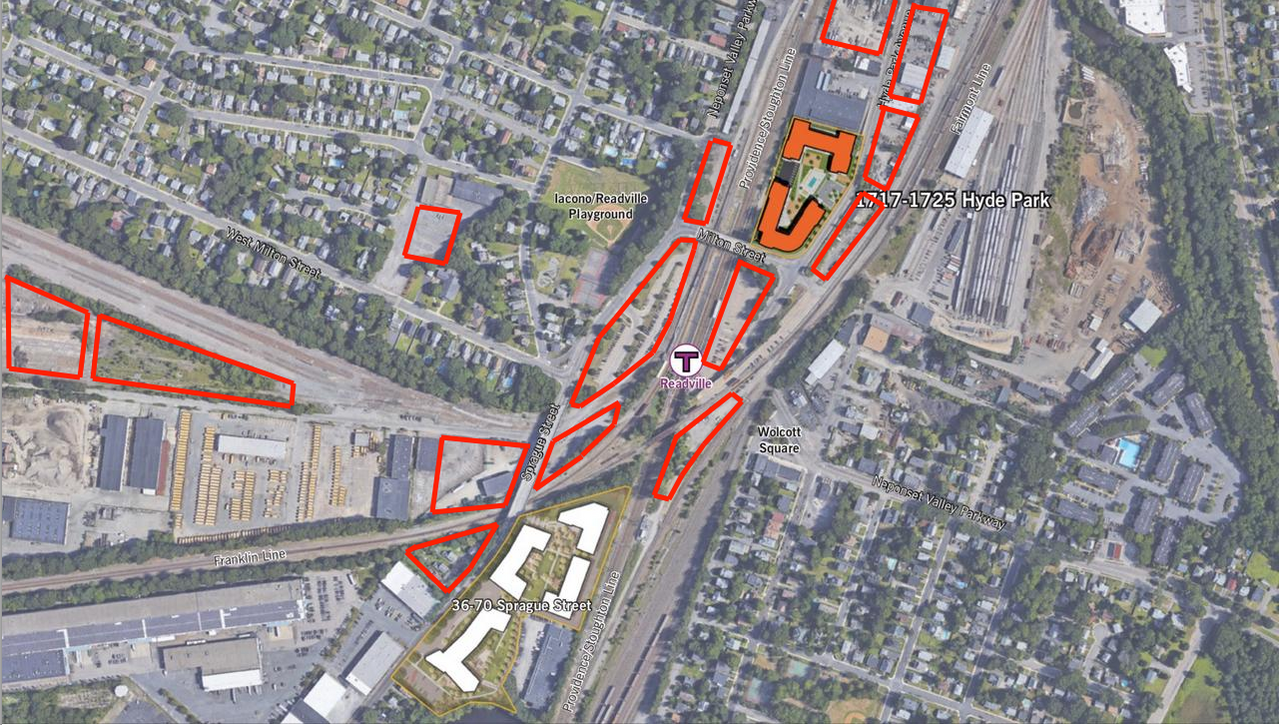 Once this and the other project across the street are built its going to be a massive improvement that hopefully opens the flood gates for the area. The neighbors are iffy on it, but its right on top of multiple transit lines this is THE place to build.

On top of that its far enough away from the core that it wont command ridiculous rent prices here, so again its THE place to build. Hopefully theres LOTS more where this came from.

motion to vote on project approval, tabled.
Click to expand...