A very tall crane is lifting some things up to the roof. Not sure what's going up there exactly, but there is now a pending plan for a major project review by the historic preservation board for this location. Seems like something's going on! 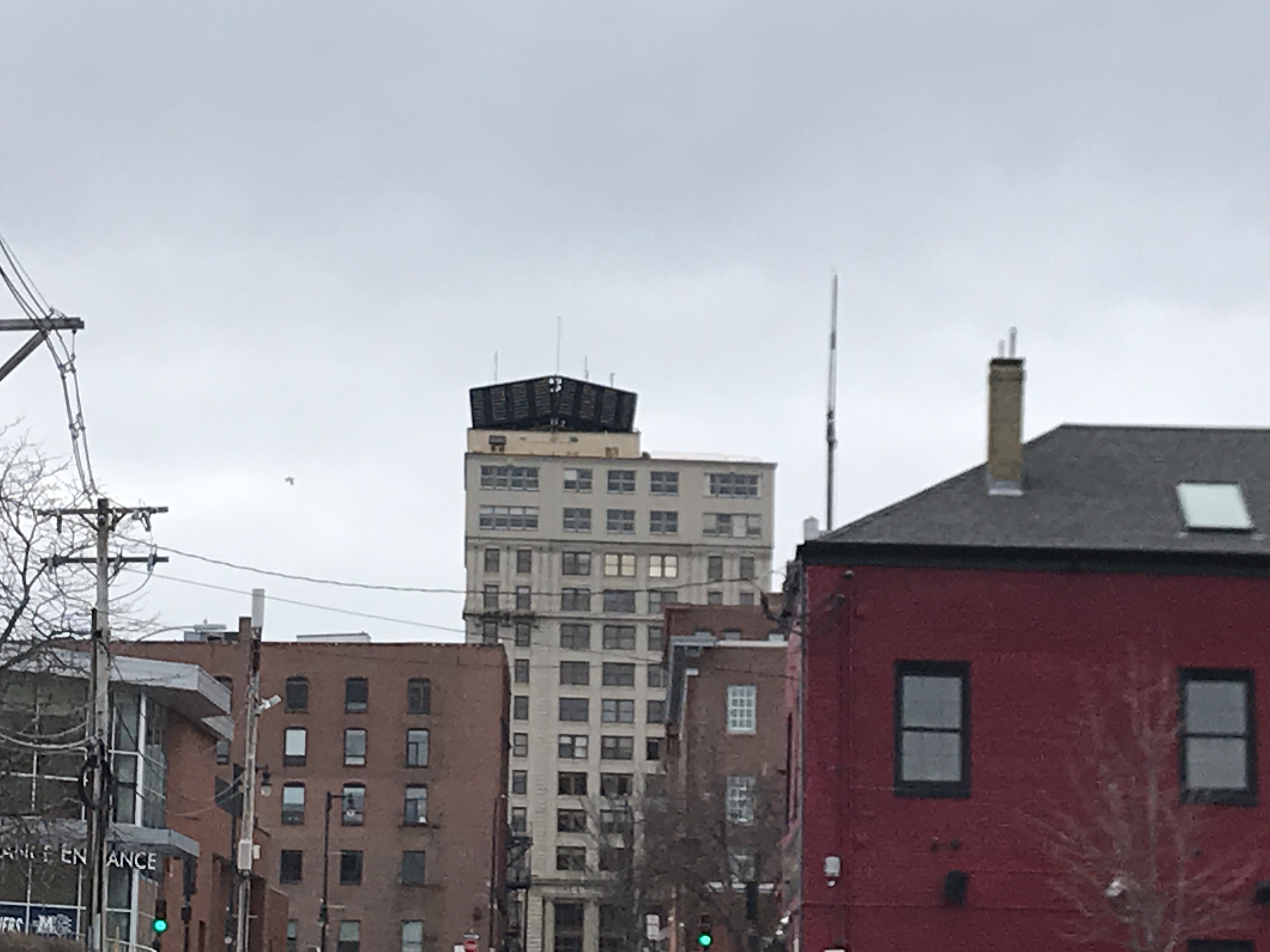 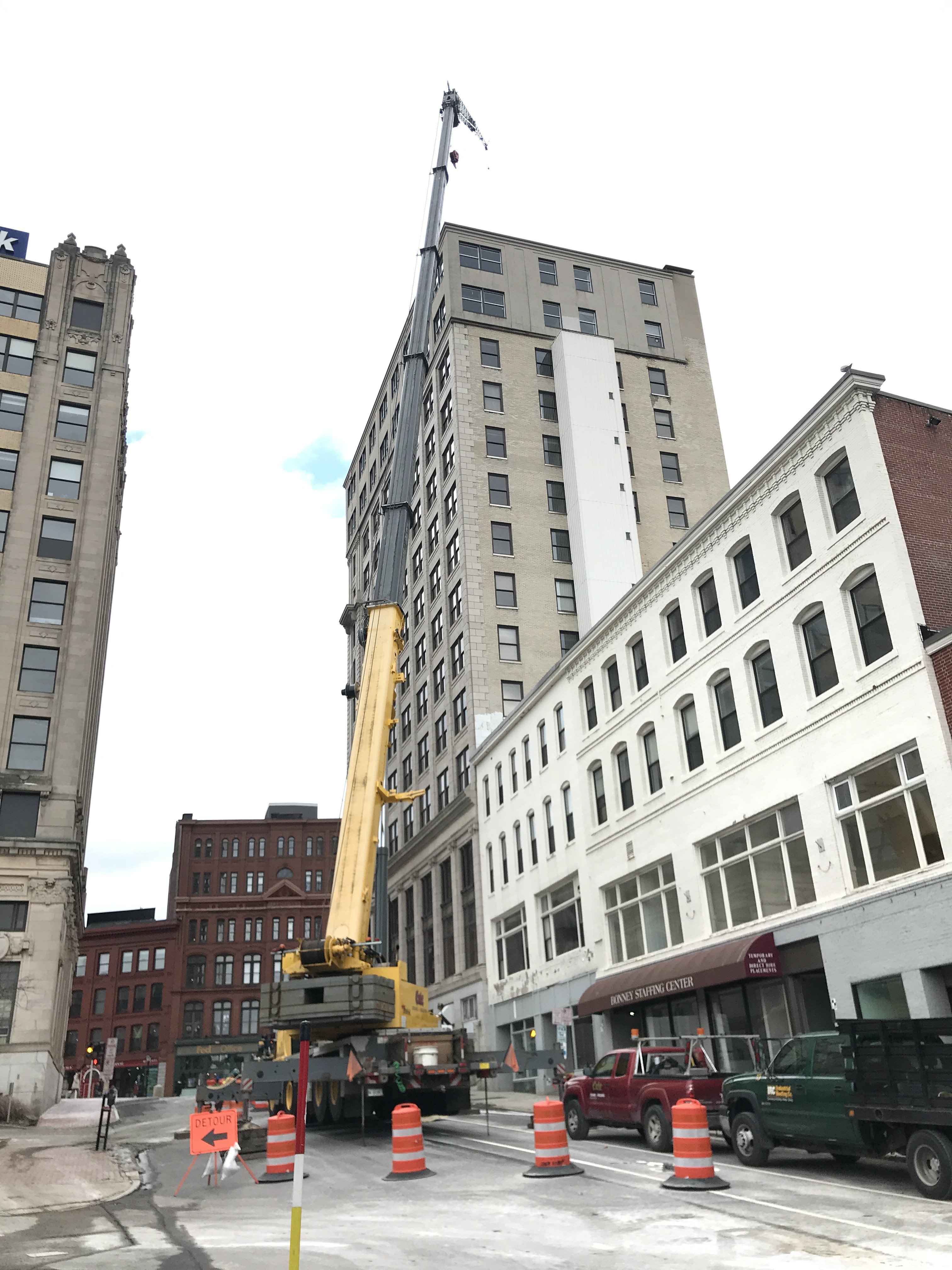 I think that as we ease out of the COVID crisis and gradually return to normal life you'll see developers begin to move forward with previously planned renovations and new projects. This building and the Portland Square development are two that I'm hoping will gain some traction in the near future.
C

Well, fixing the leaks is a start!
M

It looks like the re-developers are sticking with the hotel plan after all. They're going back to the HPB soon with updated proposals for the facade. Looks like some pretty major (and I imagine expensive) repairs and improvements are being recommended. The most intriguing change to me is the proposal to replace the top two floors (the addition) exterior with floor-to-ceiling windows. Also they're proposing to replace the sign with "updated" one of the same size. Not sure what they have in mind there. 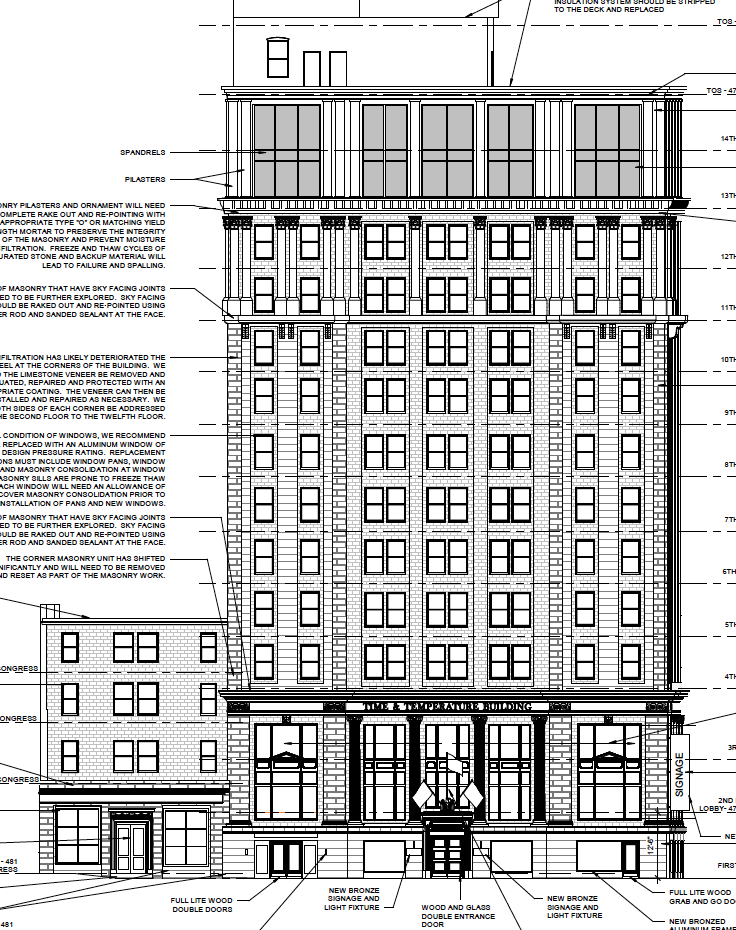 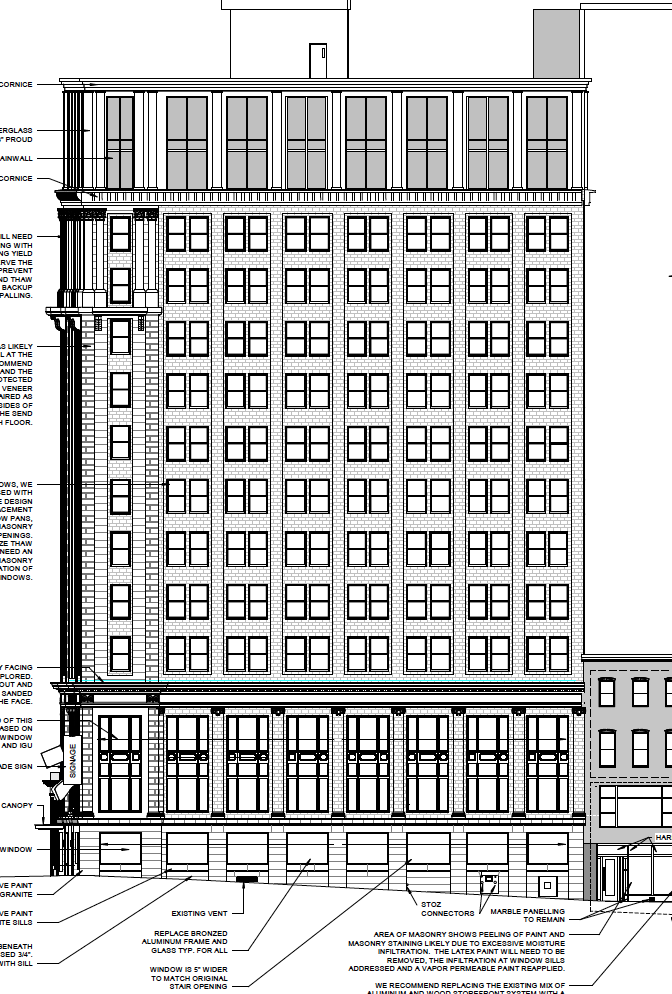 Thanks Max. This will be quite a project (almost an entire block) and will give new life to a classic Portland structure and especially to that area of downtown. The top two floors will grow on me and they will definitely have us focusing upward to a much higher degree than we do now. The renovations of the adjoining buildings on Congress and especially Preble Street is an added bonus. Looks like the name of the lodging entity will be the Time & Temperature Hotel. I do like the new cornice that will be added to the top of the 14th floor and a new digital sign will be appreciated by all.
Last edited: May 15, 2021
M

They need to be careful with the sign replacement, though. That sign, with no more than 4 letters, etc., was specifically and strictly grandfathered into the state's anti-billboard legislation. So, while replacing it with one substantially similar worked (when they redid it and added the programmable letters), they can't go too crazy with the new version. I do realize that the company that built all versions of that sign, American Sign and Indicator, went out of business a few years ago, so I can see them wanting a modern replacement.
P

Luxury hotel, rooftop bar planned for Portland’s iconic Time & Temperature building
T.T. Maine Ventures proposes 186 hotel rooms, a rooftop bar, meeting and banquet spaces, retail shops and a restaurant at 477 Congress St.
BY RANDY BILLINGSSTAFF WRITER
The 14-story Time & Temperature Building at 477 Congress St. could become a luxury hotel with a rooftop bar.
The 14-story Time & Temperature Building at 477 Congress St. could become a luxury hotel with a rooftop bar. Press Herald file photo
Developers have filed plans to convert one of Portland’s most iconic buildings into a 186-room luxury hotel with a rooftop bar.
The proposal, which faces an initial review before the Historic Preservation Board on Wednesday, would also include banquet and meetings rooms, a restaurant and retail stores in the 14-story office tower known as the Time & Temperature Building.
The Historic Preservation Board will review the proposed exterior changes as part of the project, which must undergo Planning Board reviews as well.
Andrew Preston and Chris Rhoades, right, stand on the roof of the Time and Temperature Building in Portland in August 2020. The developers purchased the building in October 2018 for $9.3 million and have been working on plans to restore the iconic landmark. Staff photo by Derek Davis/Staff Photographer
Buy this Photo
Developer Chris Rhoades, of T.T. Maine Venture, LLC, said he hopes to have the project under construction by this fall, with occupancy ready by the end of 2023 — right before the building’s 100-year anniversary. He said the hotel’s location near Monument Square on Congress Street in the middle of the downtown and a three-season rooftop bar — with a retractable canopy roof and glass walls — will be a unique destination, offering water views from all sides.
“It makes for an unbelievable setting and we plan to make an unbelievable hotel,” Rhoades said.
His business partner, Drew Preston, said the project will restore many historic finishes and they are working with the Maine Historical Society to incorporate the building’s history. The sign that displays the time, temperature and other short messages atop the building will remain in some form, he said.
Deb Andrews, the city’s historic preservation manager, said in a memo that board members should focus on proposals to redesign the upper two floors, as well as a proposed freestanding canopy at the main entrance on Congress Street. She said unanswered questions remain about how the Time & Temperature sign on top of the building will be refurbished and whether the rooftop bar will occupy the existing top two floors, or be located in a new addition.
“The aspects of the proposal that are likely to prompt the most discussion are the proposed redesign of the (two floors and the) rooftop addition, the proposed entrance canopy, and signage, as these are new added features and ones where an appropriate design solution is subject to more scrutiny or interpretation,” she wrote.
Rhoades said in an interview Tuesday that the bar is proposed for the rooftop, which was recently redone, and that the top two floors, which were added in 1963, will be hotel rooms. He said the rooftop bar will be designed as a three-season space, with a retractable roof, glass walls and bar seating near the elevator shaft.
Chris Rhoades, left, and Drew Preston on the roof of the Time and Temperature building in downtown Portland in December 2019. The rooftop offers views across the city and Casco Bay. Brianna Soukup/Staff Photographer
Christine Grimando, the city’s planning and urban development director, said staff is reviewing the application to see whether the bar would trigger the need for a zoning amendment.
“We’re still reviewing the submission for compliance with zoning and other standards, but the application doesn’t show the project exceeding maximum height,” she said. “If the applicant proposed to exceed the maximum height with the project, the application for a zoning map amendment would precede the site plan review.”

The Time & Temperature complex is comprised of four separate buildings that were tied together when the central office tower was constructed in 1924, Andrews wrote. In addition to the Chapman Building at 477 Congress St., the complex includes the Preble House building at 481 Congress St., 10-20 Preble St. and the former B.F. Keith Theatre at 22 Preble St.
Although outside the board’s purview, Andrews noted the unique retail arcade that is contained in the complex and still largely intact. Rhoades said that area will be restored and include a fitness center, meeting spaces and smaller commercial units for small businesses, which would be accessed from Preble Street.
The 14-story office tower at 477 Congress St., which opened in 1924 as the 12-story Chapman Building, was seized by a collections agency in 2016 after years of neglect and a mass exodus of tenants. It was then sold at auction to T.T. Maine Venture in October 2018 for $9.3 million.
Rhoades and Preston have a background in real estate development and financial backing from the Presidium Group, a Dallas-based real estate investment firm that owns about 13,000 apartment units in multiple states. The same partnership is behind Brunswick Landing Venture LLC, which has purchased 120 acres of former base housing and buildable land inside Brunswick Landing, a decommissioned naval air station in Brunswick that was converted to private ownership in 2011.
The Time & Temperature Building can be recognized from miles around by the 30-foot-wide, 9-foot-high digital clock on its roof, a Portland landmark since it was installed in 1964. Rhoades said they will either refurbish that sign, or install a new one that is capable of displaying more characters.
“We will probably upgrade it,” he said. “We’re waiting to hear back about our options from Historic Preservation.”
Scores of hotel rooms have been added in Portland in recent years, but Rhoades said the demand shows no signs of waning.
Even amid the pandemic, Maine — especially Portland with its breweries and restaurants — remains a popular destination.
“I think you’ll find occupancy rates are going to be off the charts” this summer,” Rhoades said. “There’s a high level demand to come and visit Portland.”
Rhoades and Preston also have an application pending to build 260 apartments on the same block at 45 Brown St. However, Rhoades said that project is on hold, because the project is seeking a tax break from the city in order to move forward. They originally requested $32 million in tax increment financing over 30 years, but their request has been reduced to $25 million over the same timeframe.
Rhoades said the council chose not to vote on the request last month and instead sent it back to a council committee for further review. If the council decides not provide that financing, he said they would convert it to a condominium project.

PWMFlyer said:
Rhoades said the council chose not to vote on the request last month and instead sent it back to a council committee for further review. If the council decides not provide that financing, he said they would convert it to a condominium project.
Click to expand...

Honestly, this seems like kind of a dirty way to essentially force the city to grant the TIF if they want the rental housing that the committee repeatedly said they want for that site. Very interesting that Redfern is able to build the same number of rental units just two blocks away with no TIF and lower overall rents.
P

Construction on the Exterior Roof Top Deck has not even started yet. GC's bidding on the project is due this Thursday. So I wouldn't expect to see it completed for many months as it appears it's a complete re-do of the entire Top of the East.

Hopefully the developers will put some effort into the mechanical space on the roof and make it blend in visually with the top two floors. Maybe a new exterior cladding with a few more windows that are symmetrical. I'm guessing the space will be used for access to the rooftop lounge and I wonder if small restrooms could be installed inside the space for the guests using the bar? Will probably be set up like the Top of the East where the facilities are located on the next floor down. Max, we need some more renderings!
N

I listened in to it -- the HPB was receptive and appreciative that this iconic building will be getting some much needed attention. There wasn't much revealed in the discussion that couldn't be gleaned from the packet.

There was some concern expressed about the massing of the proposed updated elevator/stair egress on the north side of the building, which from the renderings appears to be about 3 times bigger than what's there now and would just be a blank wall. It was suggested that some level of fenestration could help to break it up and make it more attractive, and the architects said they had considered it and would look at it again.

Unfortunately I haven't come across any renderings other than what was in the HPB packet!

Max, do you have tonight's meeting covered?
M

Portlander said:
Max, do you have tonight's meeting covered?
Click to expand...

Actually, it looks like it was taken off the agenda for tonight's meeting, which is disappointing.
P

Its on the planning board meeting agenda 8/24

Also unsure as to whether this project (the T&T renovation and the garage reconstruction) Have been grandfathered In from GND rules.