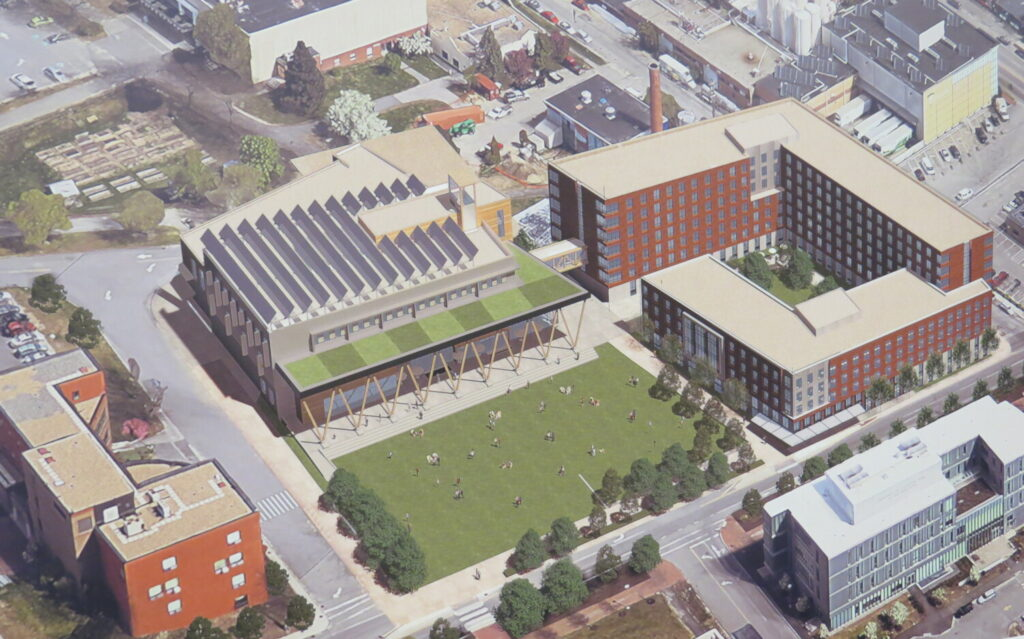 A decade or so ago, a young woman I know who was a senior looking at colleges came and took the tours of Gorham and Portland. The biggest thing she took away was the student tour guide in Gorham pointing out one building and saying, "that's our chem-free dorm; that just means you have to hide it when the RA's come by." Personally, I was confused as to why she would be considering paying out-of-state tuition to USM in the first place; I think to most college-bound seniors with choices in the area it's the backup-to-the-backup if you can't afford or get into Orono. It has built itself a successful niche serving "non-traditional" students who are continuing their educations after starting a career, but trying to sell itself as a first choice to 18yo's doesn't strike me as a winning proposition.
So far as maintaining the Gorham campus goes, it has most of the dorm space, as well as all the athletic facilities, the library, the performance spaces for the music program, etc. That's a lot of physical plant that there isn't room for them to replicate in Portland.
C

The USM name in Gorham should stay the same. Portland should be UMP (to fit with the law school). They would still remain under the University of Maine umbrella. Portland is the best draw for out-of-state and foreign students (needed, as the Maine birth rate is on the decline). Simply look at UNE in Biddeford to see what they are doing. Their new student center is massive, beautiful, cutting edge. They have a dynamic campus, and the sports programs are growing. They have a football team now, and the basketball team is becoming more and more competitive. Soon, they will match or surpass UMO in sports. Why? Out-of-state and foreign students want to be near population centers. If UMO had been in Portland, it would have doubled the size and impact of that University (by now). UMP sports could draw at games at Cross Insurance Arena. Kids today aren't interested in cars as much, and the train is the best way to get to Boston (comfortable 2.5 hours from Portland), which is on its way -- if not now -- to being one of the most important tech cities in the world. You want a great job? Work in Boston. Boeing, Amazon, et al are all building new office buildings for the highest tier of their tech workers. The land swath from Brunswick to Wells is the only real future economy and population dynamic for Maine. It's literally tethered to Boston.
Last edited: Dec 27, 2019
M

Outside amenities side, do you feel that the actual USM education is worth the premium you're paying over your state school?
P 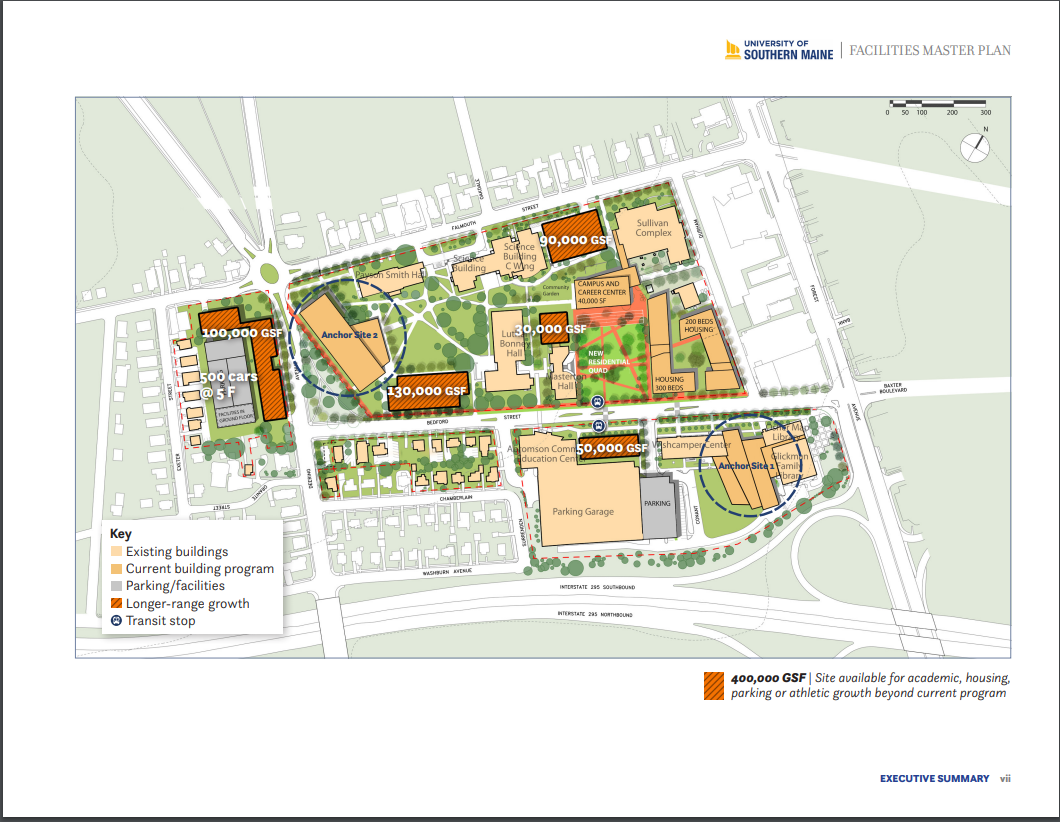 An additional rendering of the student center and the graduate housing frontage along Bedford St. 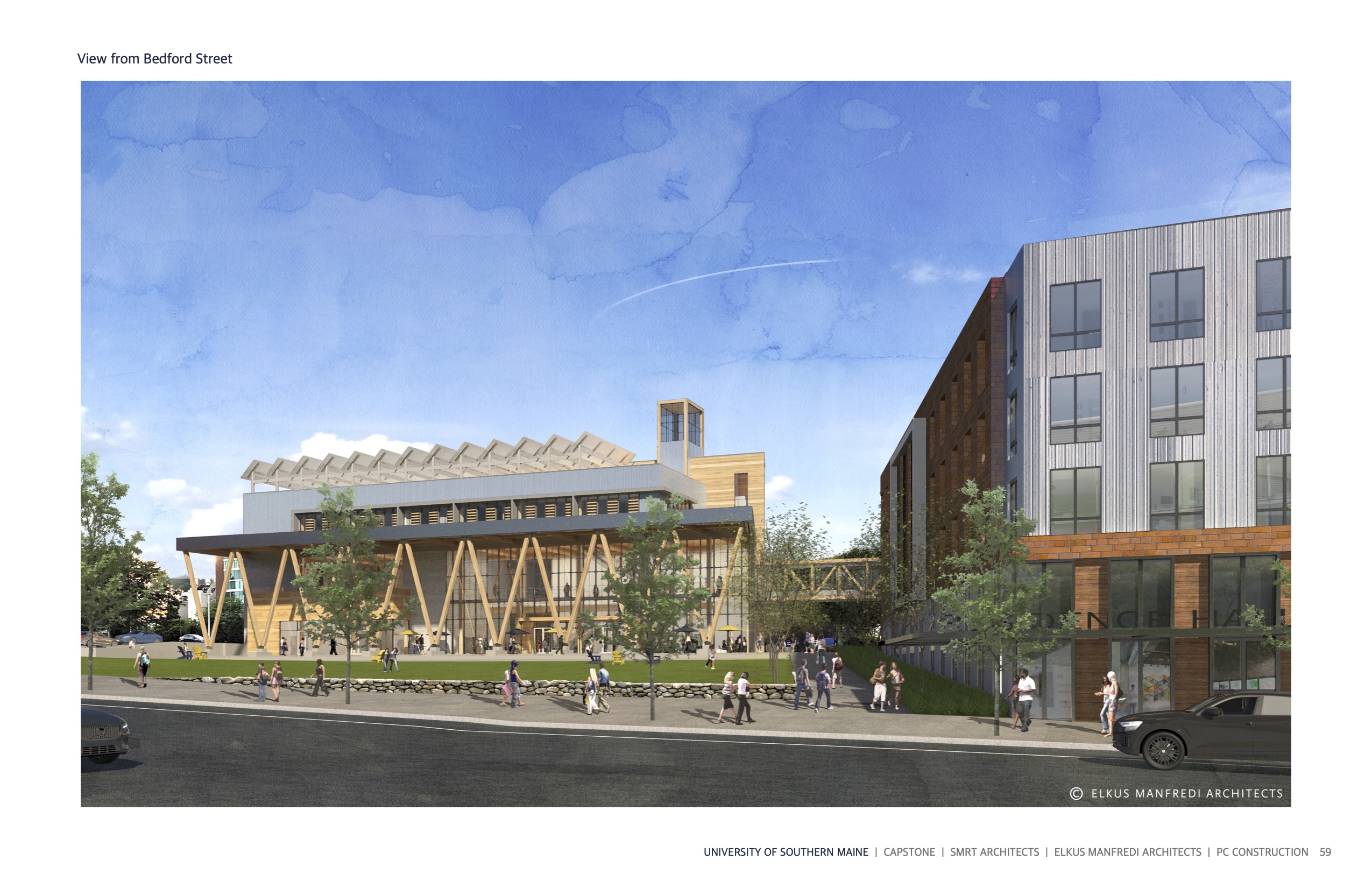 markhb said:
Outside amenities side, do you feel that the actual USM education is worth the premium you're paying over your state school?
Click to expand...

With my financial aid from the school I'm not paying more than I would at any of the Vermont state schools. They have scholarships specifically for students from other New England schools to bring costs down to in-state levels. Plus unlike with the Vermont schools I'm not stuck in the middle of nowhere at USM.

Without the financial aid they were able to give me it wouldn't have been worth it, but anecdotally every out of state student I know has gotten a financial aid package similar to mine.
P

There is a big announcement from Northeastern University Monday at Ocean Gateway. The Governor, Mayor of Portland, Chellie Pingree, CEO of Tilson, and others will be attendance. Thoughts? my thought is USM is going to dump the Portland campus keep Gorham and Lewiston under the USM name. Portland fits the Northeastern model of inter-city education. Northeastern with deep pockets can fix up the Portland campus and run it under their program. I could be wrong... Maybe something separate Congress Street? Midtown?
P

PWMFlyer said:
There is a big announcement from Northeastern University Monday at Ocean Gateway. The Governor, Mayor of Portland, Chellie Pingree, CEO of Tilson, and others will be attendance. Thoughts? my thought is USM is going to dump the Portland campus keep Gorham and Lewiston under the USM name. Portland fits the Northeastern model of inter-city education. Northeastern with deep pockets can fix up the Portland campus and run it under their program. I could be wrong... Maybe something separate Congress Street? Midtown?
Click to expand...

Northeastern U in Portland? Thats something huge.

A graduate business school. Probably on midtown lot/s, or next to city hall. Today's Maine Biz Journal has an article about UMO/USM trying to put some kind of graduate business school program together, but without a new facility, it's rushed, lame. Northeastern has opened new graduate school programs in other cities in the U.S. And, the fact that Tilson's CEO is prominent in this announcement is a sign of it too. He's on the record stating that they need more top tier business grads--he doesn't want to recruit outside the state the way he has to. The same with IDEXX and WEX. They all need qualified people for internships. That's why Boeing, Google, Amazon, et al are locating many top tech jobs to Boston (Harvard and MIT). The last year of the program is unpaid training at the company. Smart. (Boeing's new design lab is across the street from MIT!)

I wonder if this announcement will go in conjunction for a reveal of a master plan for 385 Congress? That's been in the works for a while, and according to a MaineBiz article a few months ago, could have upwards of 150,000 sq. ft of office / education space. (Plus of course there's the rendering on Archetype's site showing a 10-story "contemporary educational facility" on the corner of Pearl and Congress.

The fact that the announcement is taking place at Ocean Gateway makes me think it will be somewhere along the Eastern Waterfront / Portland Foreside.
Last edited: Jan 24, 2020
D

Yeah, my guess is the 385 Congress development as well
M

PWMFlyer said:
Thoughts? my thought is USM is going to dump the Portland campus keep Gorham and Lewiston under the USM name.
Click to expand...

I'm pretty sure the Legislature would want to be involved in that decision, and they wouldn't be doing the dog-and-pony show if that were the case. "Northeastern University is expected to announce the creation of an advanced graduate study and research institute in Portland aimed at building a high-tech workforce to grow the state’s knowledge economy.
...

The outlines of the school are laid out on a public website and the social media profile of a central figure in the new organization.

The Institute for Digital Engineering and Life Sciences – IDEALS – a Portland-based non-profit has “for two years created the Roux Institute at Northeastern University in Portland, Maine,” said executive consultant Chuck Hewett, on his Linkedin profile.

The graduate education and research institute will focus narrowly on digital engineering, genomics, life sciences with an emphasis on the intersection of human beings, artificial intelligence and genomes, Hewett added.
Click to expand...

The IDEALS team is now locating a landmark Portland campus and recruiting a founding academic institution. The goal is to select an academic partner in early 2020, enroll students in a temporary space in 2021, and open a Portland campus in 2023.
Click to expand...

Delayed but not abandoned:

USM is exploring a smaller student center with Capstone Development Partners, the project developer, and has asked them to decrease the cost to around $25 million.

The new timeline for the project includes a soft opening in May 2023 and full opening of the 577-bed residence hall, the first student housing on USM’s Portland campus, and student center in the fall of 2023.
Click to expand...

The project, which includes the first student housing on USM's Portland campus, is now scheduled for completion in spring 2023.

UNE has a new student center, and it cost $35 million. It's arch is stunning and contains the necessary amenities and departments a college needs for today's students (in one building). I don't have much hope that anything of note will be built for USM Portland, especially in today's times. It suffers from poor leadership, which does not understand how to raise money. There are several billionaires who live part-time in Southern Maine, perhaps find one that can contribute by putting their name on a key building. Again, always a lackluster effort coming from this school, especially in light of Portland being one of the most attractive mid-sized metro areas in the country. If you look at the honors lists of Maine's top graduating high school students, and the colleges that they've committed to, it's a mass exodus out of Maine for other schools. Embarrassing.

Some fairly substantial design changes to the residence hall project presented at last night's Woodford-Oakdale Neighborhood Association meeting. I couldn't find any actual new renderings aside from this screenshot of the zoom conference. 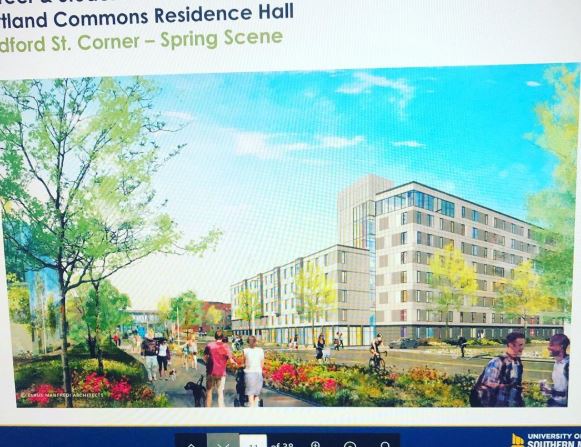