Looking to work with the owners, developers, architects or GCs at 26-28 Chestnut Street? Signup to get contact info and actionable data to drive your business.

Big, big money for those parcels! It's directly adjacent to the new community path. I think this is the first proposal for the inner-inner-belt area (no connection to McGrath). Hopefully first of many.

Wiltonion said:
Big, big money for those parcels! It's directly adjustment to the new community path. I think this is the first proposal for the inner-inner-belt area (no connection to McGrath). Hopefully first of many.
Click to expand...

This is on the West side of the tracks outside of inner belt island in the Eversource warehouse/yard I think. It will benefit greatly from the increased visibility once McGrath comes down. Brickbottom lofts will get some new wealthy neighbors.
R

Brickbottom lofts will probably NIMBY this out of some selfish sense of territorial entitlement.
E

That is a very confusing render. What is under that footbridge in the foreground? There is a drawing package up on the city planning website that I don't have time to dig into at the moment that might explain it: [EDIT: These were not relevant]

EDIT: Meh, ignore, it's just drawings of the current structure.

According to the ZBA filings they’re doing this as two projects for compliance with the zoning regulations. They’re subdividing the lot and building “28 Chestnut” and “28 Fitchburg” as two interconnected buildings, with no party walls dividing them. Aside from the legal fig leaf and articulating the exteriors distinctly, it will be a single, large, lab floor plate.

Thatll be nice to see this area start filling in.
E

Happy to see the bluebikes dock. The two nearby have recently started to saturate with commuters (bikes gone by midmorning, docks gone by dinnertime). Additional capacity and reverse demand (since this will be a commute destination rather than source) will help balance it out.

The Inner Belt was supposed to come through Roxbury & JP years ago, but the NIMBYs had it killed in favor of the Southwest Corridor which houses the Orange Line, Amtrak & the commuter Rail.

Am i reading this right, a 1.15 parking ratio?! Next to a new rapid transit station?
E

This is a big and active site now, I assume because of it's out of the way location no one has wandered down to snap a pic before (apparently we don't have anyone living in Brickbottom on the forums, I'm surprised!)

Watching them dig trenches for slurry walls kept my 2 year old occupied for a solid 15 minutes, so that was nice

Shot taken from the front steps of Brickbottom, so I was able to get a little bit of vertical perspective. The white tanks (I assume that thing mixes the slurry or maybe the concrete?) is roughly the far end of the site, ~600ft by google maps estimate. 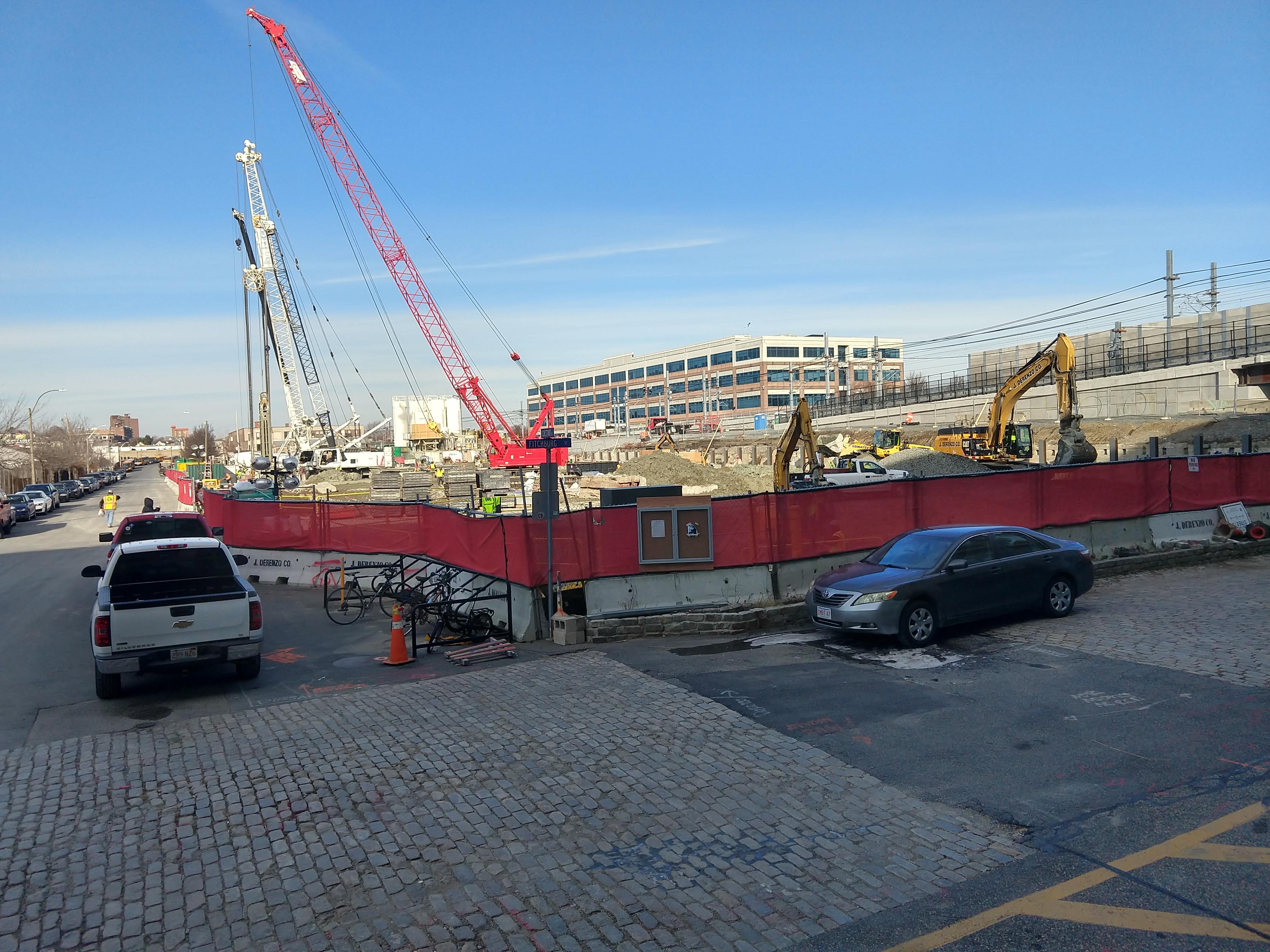 Looks like the slurry wall is done, excavating everything out now. 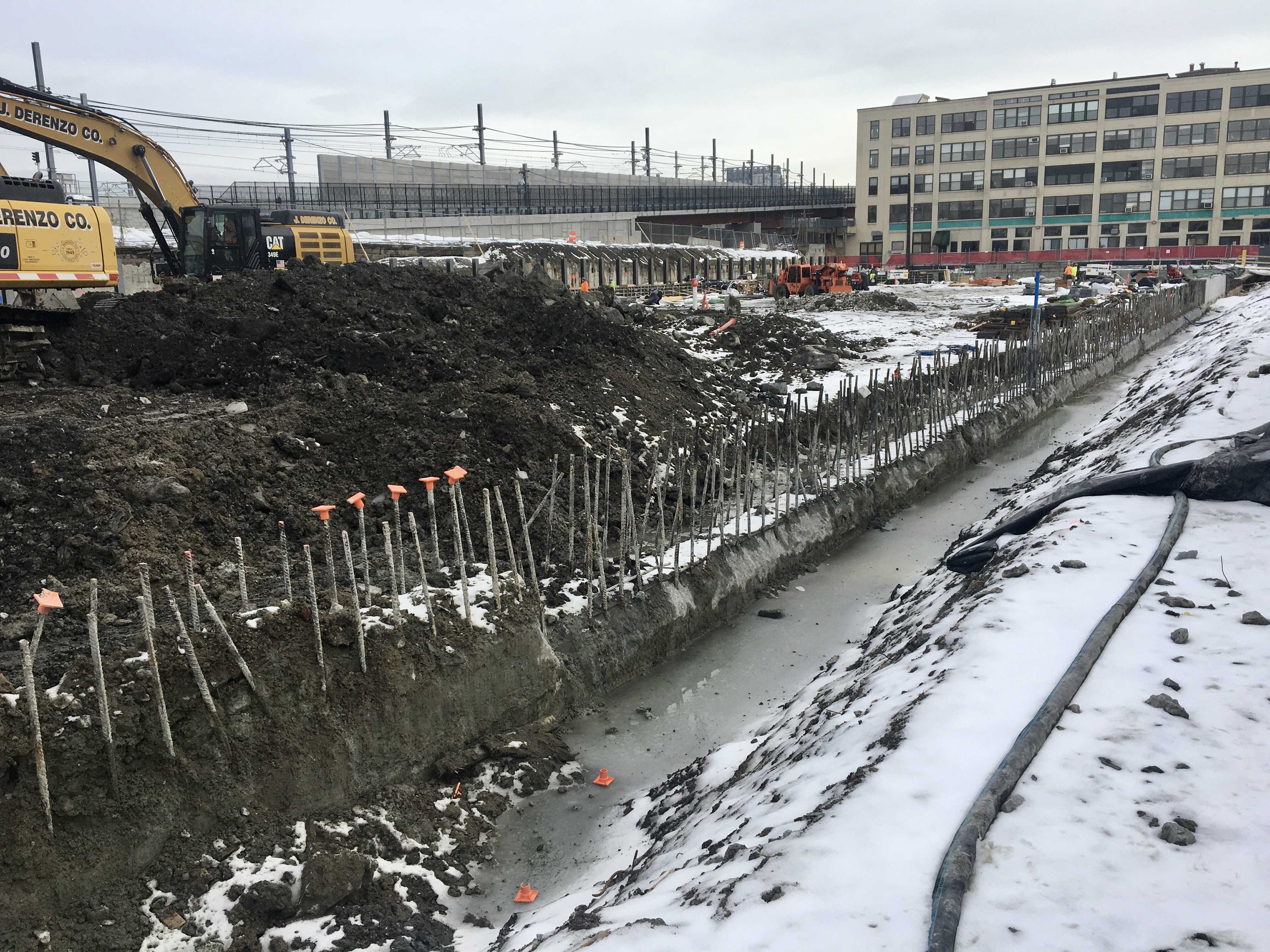 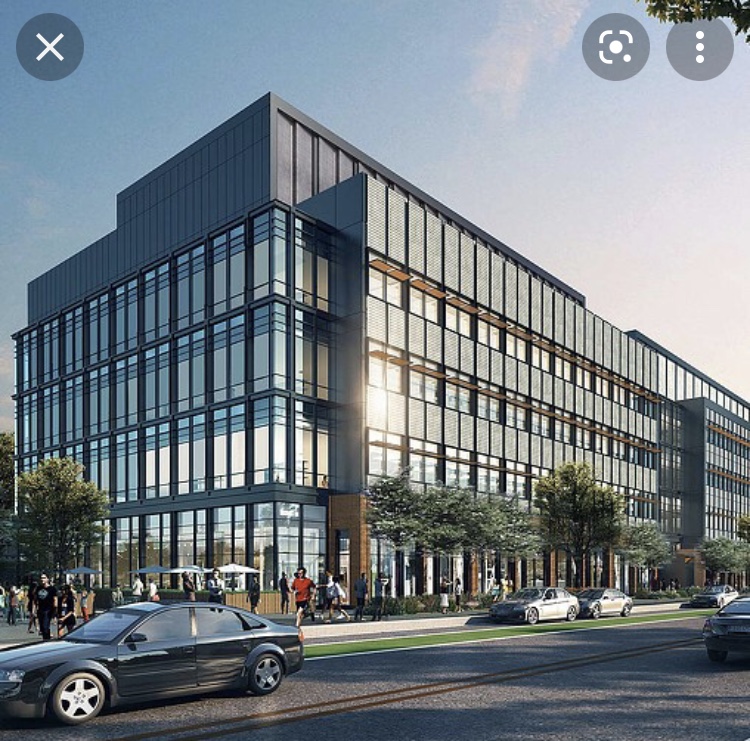 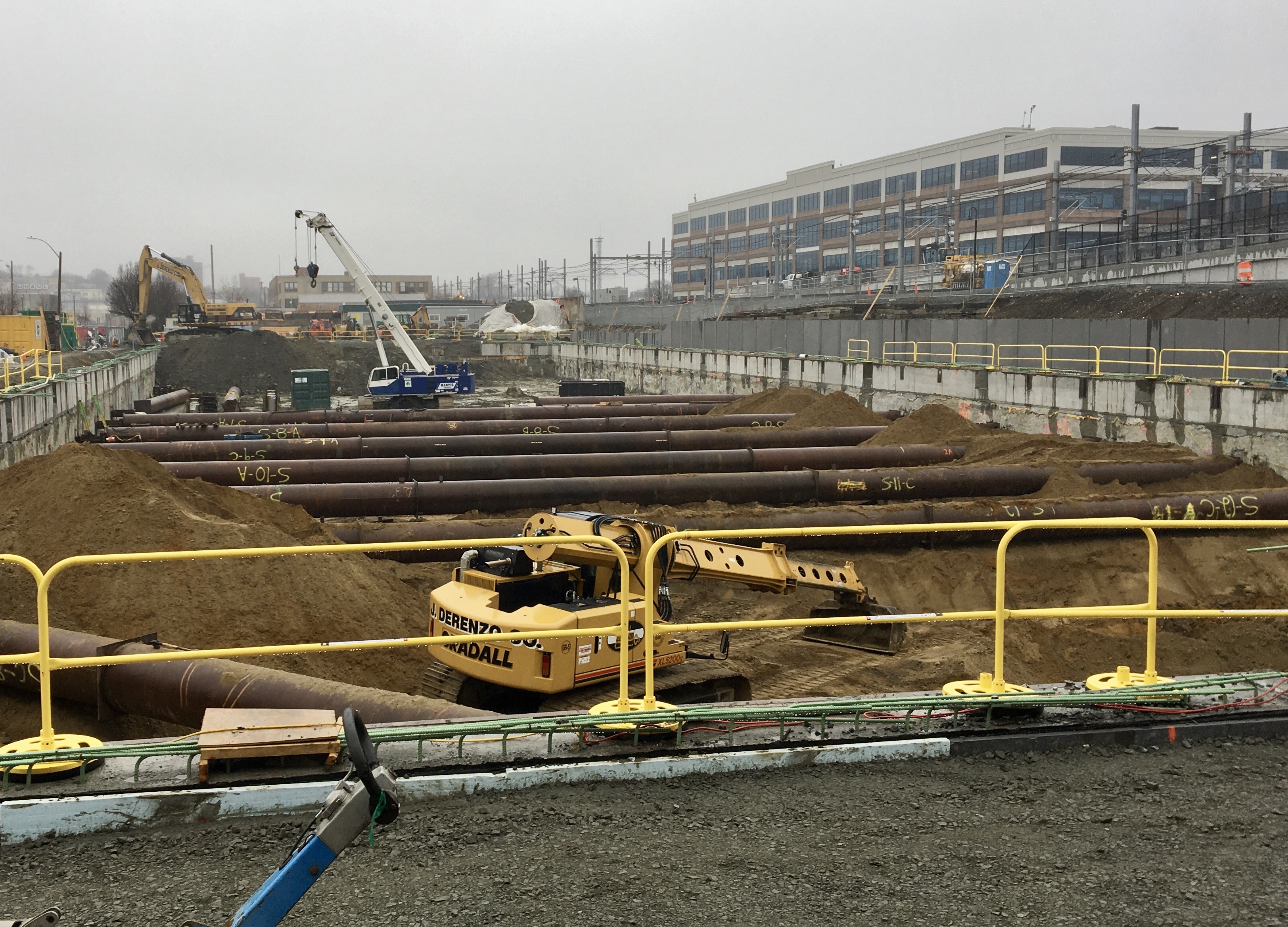 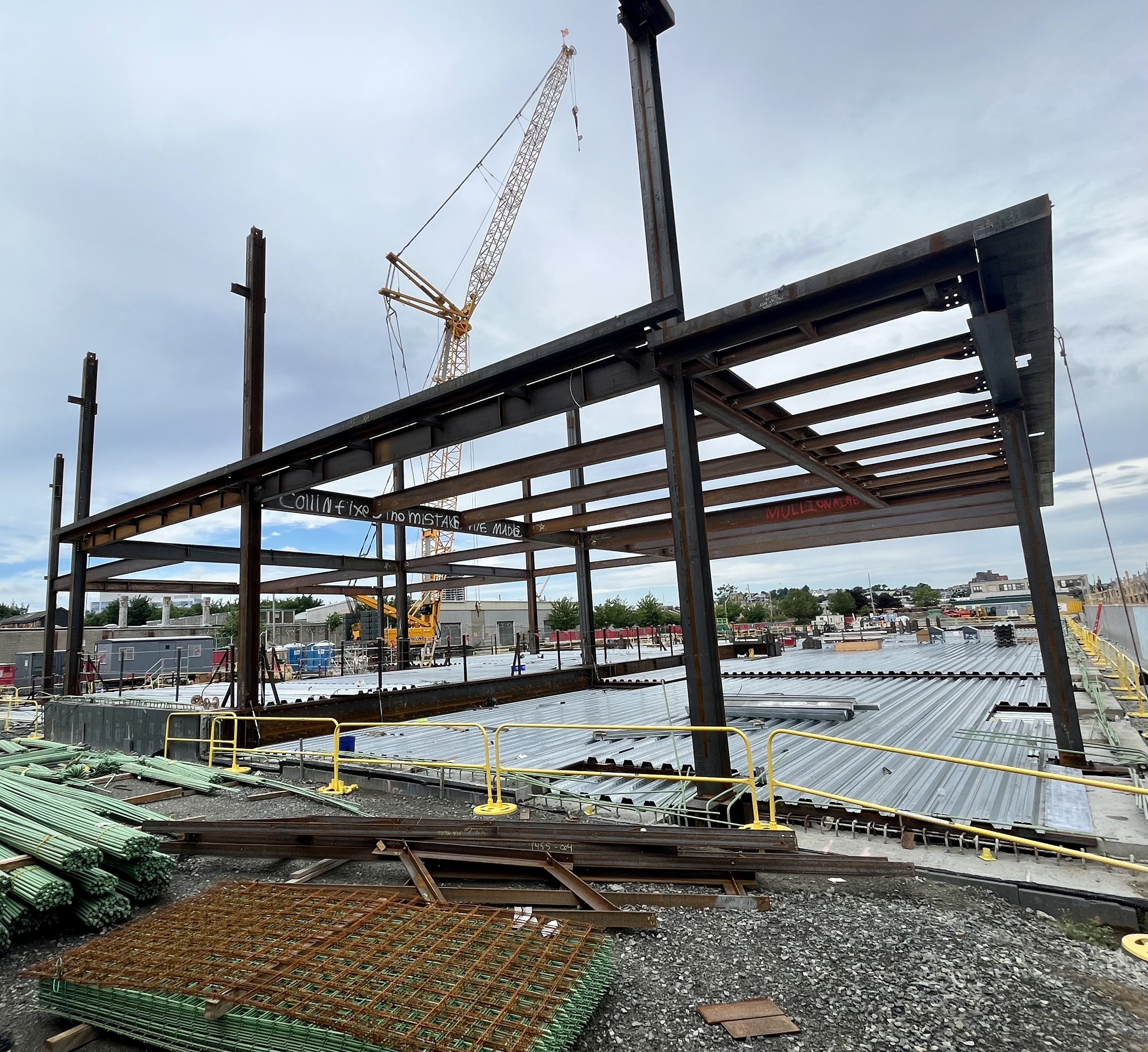 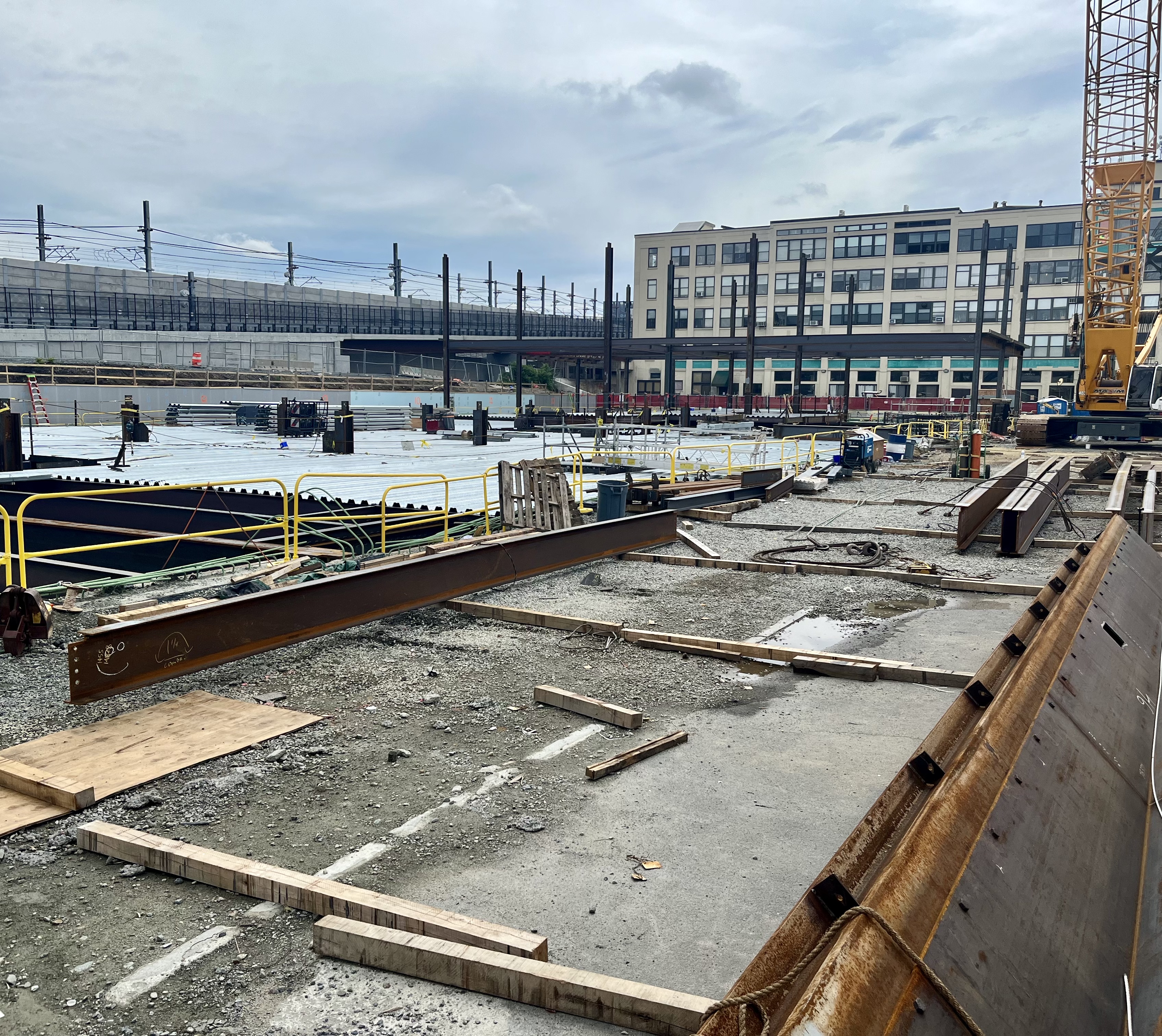 $192M financing secured - BBJ. (I assumed they already got this, but good for them). Also, is this officially now named Inner Belt neighborhood? The article actually uses that and Brickbottom. Is it both? 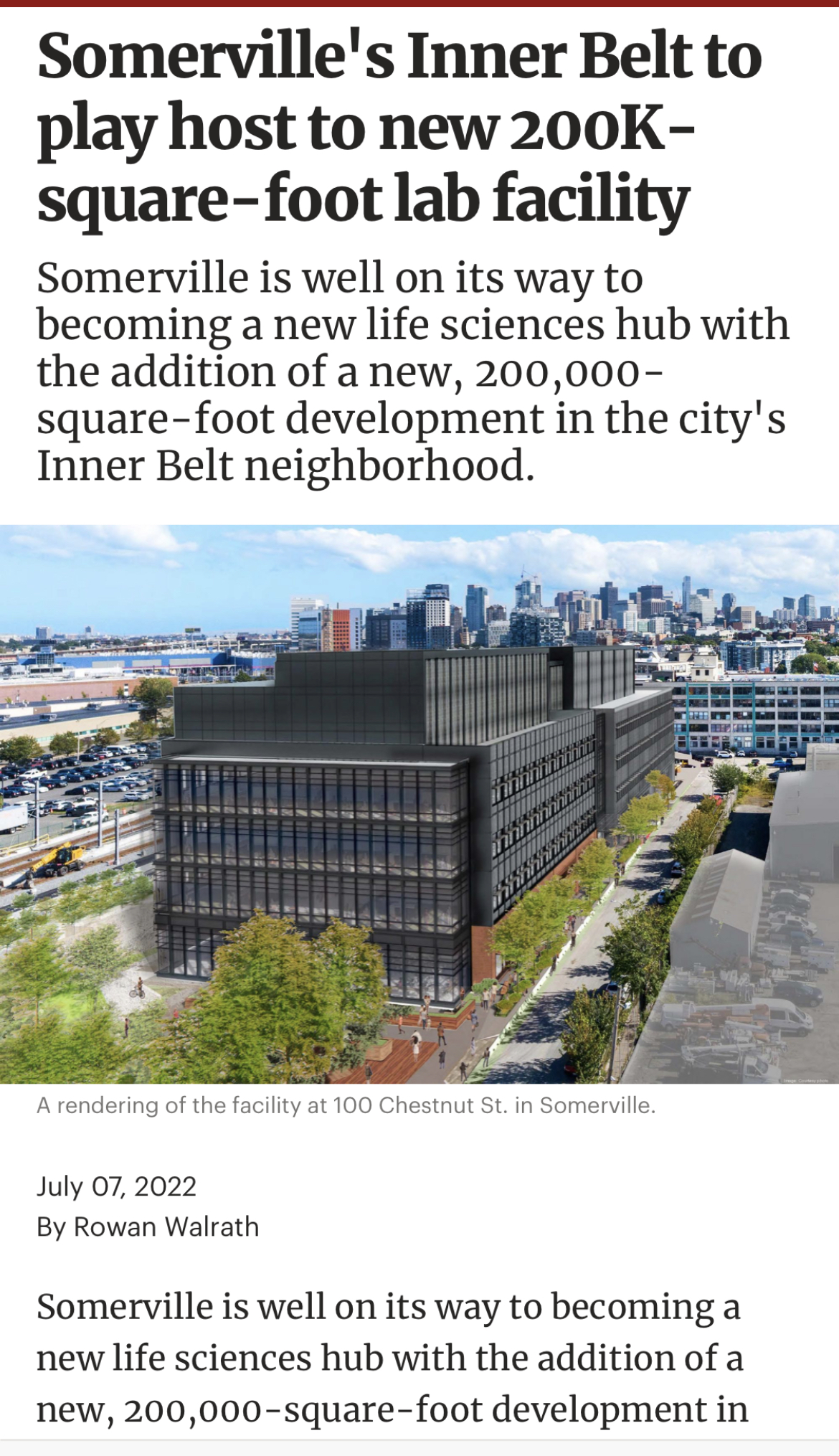 “Somerville is well on its way to becoming a new life sciences hub with the addition of a new, 200,000-square-foot development in the city's Inner Belt neighborhood.
Colliers Capital Markets on Thursday announced that it had secured $192.5 million in construction financing for the new development, which is set to be a mixed-use property involving labs, offices, ground-floor retail and underground parking.
North River Leerink, a joint project of North River Co. and Leerink Development, is the firm developing the property at 100 Chestnut St.
The new space is slated to be completed in the summer of 2023. Designed by architecture firm Gensler and LEED Platinum-certified, it will ultimately feature 200,164 square feet of lab and office space, 8,452 square feet of retail and amenities space and two levels of below-ground parking.
The site will play next-door neighbor to 150 and 200 Inner Belt Road, a 7.92-acre site also developed by North River Leerink along with Wheelock Street Capital. That facility involves 191,089 square feet of lab and office space, as well as fine art storage facilities. Microbiome startup Finch Therapeutics Inc. (Nasdaq: FNCH) and biohazardous waste firm Triumvirate Environmental are among the tenants there.
Sign up for the BioFlash e-newsletter, your free twice-weekly source for medical device and life sciences news in Greater Boston.
Somerville has long been positioning itself as the "next Kendall Square." Assembly Row, on the eastern edge of the city, is now home to the administrative offices of Mass General Brigham, a planned lab and R&D campus built by life-science development firm BioMed Realty, and plenty of mixed-use lab space. Gene therapy firm bluebird bio Inc. (Nasdaq: BLUE) has recently staked out space there.
Not far away, several Flagship Pioneering-backed companies have made their new homes in Union Square, at the Boynton Yards site that came online last fall. The developers behind that facility aim to start construction this summer on another lab-and-office building on McGrath Highway in the city, at the former site of a liquor store.
Colliers describes the Inner Belt developments as "a life science node of critical mass."

"100 Chestnut is being developed by an experienced and dedicated team that’s laser focused on delivering a state-of-the-art facility," Colliers' Jeff Black said in an email to the Business Journal. "Just a half mile north of Kendall Square and adjacent to the new East Somerville Green Line T Station, 100 Chestnut is connected to everywhere. Its strategic location puts tenants at the center of Somerville's life science boom. The Brickbottom neighborhood's long legacy of creativity will soon be infused with transit, public art, eateries, parks and pathways. In short, the entire area is about to be re-energized and repositioned as the next great life sciences ecosystem in the strongest and most liquid lab market in the world.”
E

In my opinion anything on this side of the tracks is Brickbottom, not Inner Belt. The tracks are a pretty ironclad wall between the two.

So it's officially being renamed from 28 Chestnut to 100 Chestnut? The official North River/Leerink site has always been https://www.28chestnut.com.


Dr. Rosen Rosen said:
Also, is this officially now named Inner Belt neighborhood? The article actually uses that and Brickbottom. Is it both?
Click to expand...

As erom says, the tracks form a hard boundary. I think this is just a clueless journalist conflating the two — note that the article calls the region "Inner Belt," while the actual developer calls it "Brickbottom."
You must log in or register to reply here.
Share:
Facebook Twitter Reddit Pinterest Tumblr WhatsApp Email Link