taken from THIS article in the Boston Business Journal:


Menino announced that New York-based developer Midwood Investment and Development will soon file plans with the BRA to develop the building at Bromfield and Washington streets, where the current Payless Shoes is located. The plans include demolishing the current site and raising a 436,000-square-foot, 28-story building with 260 residential units. The building will consist of 23 floors of rental residential units, three floors of parking, and three floors of retail space. Total project cost is $200 million, according to the BRA.
Click to expand...

The Boston Globe now has an artocle. I think we may finaly be at the turning point in downtown crossing.

Midwood Management Corp., which has quietly acquired several properties in the neighborhood over the past few years, said it plans to build 200 units of luxury apartment, in addition to three floors of retail space at the corner of Bromfield and Washington Streets. The company, which plans to file formal plans with the Boston Redevelopment Agency this week, said it hopes to begin construction in 2010.

The privately owned developer owns 100 properties spanning more than 3.5 million square feet nationwide, but the development would be its first for the Boston area. The company said it hopes to begin construction in 2010.
(By Todd Wallack, Globe Staff)
Click to expand...

A New York-based developer is expected to file plans this week for a $200 million mixed-use project in Boston?s Downtown Crossing.

If approved, Midwood Investment & Development would demolish four stores along Washington Street and three on Bromfield Street and replace them with a 28-story tower.

The upper floors will offer 260 apartments, with six floors of retail space and parking on the lower levels. Upon completion, the project is expected to attract several new retail tenants to the city?s shopping district. The developer has agreed to work with the existing tenants to find them new space during construction.

?It still needs to go through the approval process, but from what I can see it seems like a promising site for redevelopment,? Mayor Thomas M. Menino told Banker & Tradesman.

Paul Davis, a spokesman for Midwood Investment, said the firm wants to expand their investments in Boston.

?We are confident that our development will provide exciting new housing and retail opportunities which will further enliven the Downtown Crossing district,? Davis said.
Click to expand...

From what little we know this seems like it could be a good project. Sounds like we may lose some nice older buildings though. Granted they have been very neglected (now we know why).

So, instead of having 6 distinct buildings on 6 small lots we'll have one building on a large lot. The quality better make up for it.
B

Come on, they should have proposed it at 50 stories and then it will be knocked down to 28. This will be knocked down to 10-15 stories, I'm very disappointed with these Boston development novices. For the project itself, I don't really have an opinion since renders aren't released yet. But more density = good, they could even have 6 different facades and 6 different heights to make it look like 6 different buildings on the lots, but they'll be connected so it will still have the economy of scale. But I would doubt it with the economizing caused by the ridiculously slow Boston approval process.

^^ I'm guessing that they are really aiming for 20 stories or so, hence the proposal for 28.

And faux-mixed fronts, never, ever look right. Too Disney.
C

Can't go too high. too many shadows on sunny downtown crossing
B


statler said:
^^ I'm guessing that they are really aiming for 20 stories or so, hence the proposal for 28.

And faux-mixed fronts, never, ever look right. Too Disney.
Click to expand...

I don't remember the height of either 45 Province or One Franklin being an issue so why would it happen here?

^^ Because, by the time this gets rolling, the new residents of 45 Province and One Franklin will complain about their views.
A

I know this would have a good overall effect for DTX, but....Yawn.

28 floors? Cool if this were Little Rock. Or Milwaukee. Or Sacramento.

I can guarantee you that the height was determined by the BRA...298 feet. It's the same all along that corridor. The developer almost undoubtedly went to the city and said...'here's our plan whaddayathink? The city said, this is how much you can build'


aHigherBoston78 said:
28 floors? Cool if this were Little Rock. Or Milwaukee. Or Sacramento.
Click to expand...

Does this include City Sports? I sure hope so...what a crappy building.

This seems like good news but I'll wait to see what they propose. Given Boston's turtle speed approval process I can see that these developers are looking to cash in on the next upswing in the economy in 5 years.


atlrvr said:
Does this include City Sports? I sure hope so...what a crappy building.
Click to expand...

I used to think so too, but if you look closely, you can see some nice art deco detailing on the facade. I doubt it's worth saving, but if it was cleaned up, it might be a gem.

I'll try to remember to bring in my camera this week. In the mean time I know there are few people in this area with cameras (hint, hint)

I really don't like the idea of consolidating more of Boston's fine historic fabric into mega-parcels so we can have yet another stubby tower downtown. And I'm not too sure which six buildings these are, but I think, at the very least, that the Payless building on the corner is worth preserving.

How much you want to bet they would complain about shadows even though 45 Province Street blocks the shadow from this building? They might even pull up the fact that building this will create too much foot traffic. Well I'm in the mood for a good laugh or two.
C

I am pretty sure city sports is on the opposite side of broomfield.

I just hope its not some characterless box. I think an interesting facade (not 6 fronts but a nice 2 or 3 styles) and a unique roofline. I know its only 28 stories but it doesn't have to be a square box that the city is becoming fond of.
M 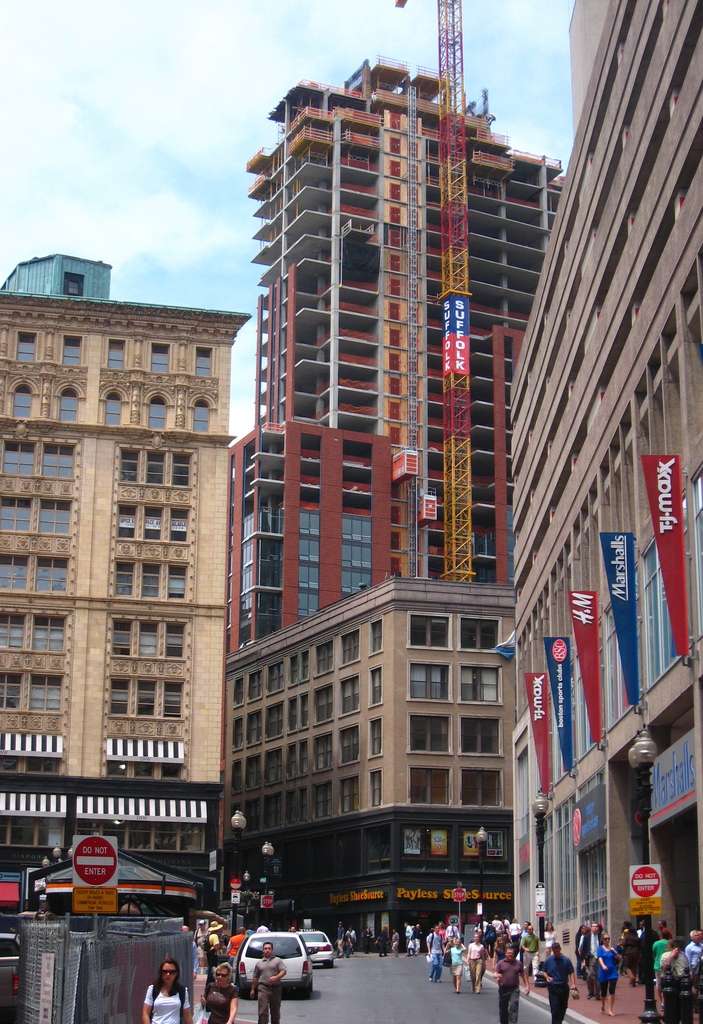