It looks like the George Cleeve (Portland founder) statue that used to be on the eastern waterfront.
C

I'm pretty sure @Portlander is right. It used to be on the Portland Yacht Services property when it was on the East End, so it makes sense if it's been moved.

PYS's blue-blooded owner claims that Cleeve is a distant ancestor and wants the city to accept it into its public art collection. The city is uninterested in yet another statue of an old white guy, especially one who may, as some histories suggest, have owned a slave at some point.

It's also not really clear what Cleeve's real role in "founding" Portland was – there's a good overview of the debate in this old 2002 Press Herald story, which was cross-posted to a historians' discussion group:
https://lists.h-net.org/cgi-bin/log...2&week=a&msg=X0nb7Kv1yCEh7V3yNIvr8Q&user=&pw=
M

Here's a pic of the statue itself (the Flickr stream has shots of the base inscription as well). 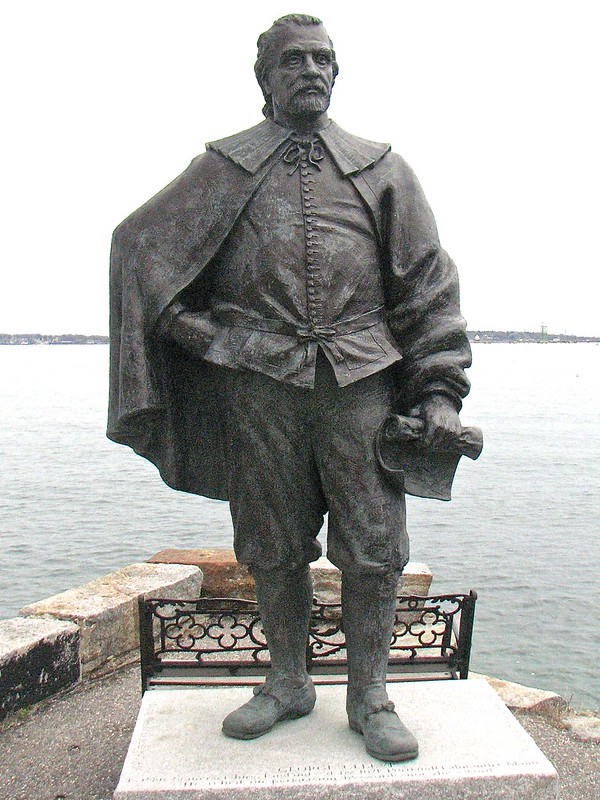 George Cleeve statue (Founder of Portland, Maine - 1633) by Don Shall, on Flickr

This peeves me. For YEARS the city ignored the Abyssinian House, letting it fall into disrepair (I've donated money to this cause as it's such an important part of Portland's history). And so George Cleeve is the founder of Portland, and he is ignored? He died in 1666, well before slavery appeared, as there were very few colonists around. This statue needs to be front and center. All of these figures need to be put into the proper context. If not, you get a watered down and inaccurate history, of which is a lie. That's simply fear.
C

@TC_zoid There was absolutely lots of slavery happening in the colonies, including Massachusetts/Maine, in the 1500s and 1600s. People usually cite 1619 as the year the African slave trade started, but well before that, there was a lot of enslavement of local Native Americans. So it's definitely possible that Cleeve, as a landowner, would have taken advantage.

There are two issues w/r/t this particular sculpture:

Incidentally, there is an official memorial to George Cleeve and his partner Richard Tucker; it's the obelisk on the Eastern Prom at the beginning of Congress St.
C

The latest from West Commercial Street. Out of frame to the left is a large surface parking lot. Apparently the 382 space parking garage on the other side is not sufficient.

mainejeff will appreciate the new telephone poles and they give this modern project a kind of rustic vibe!
M

Agree 110% on the unsightly power lines. A few years ago I needed to take a pic of the Victoria Mansion on Danforth, and I could not do it without including the power lines. Perhaps a fish eye lens standing up close is the only way. It's one of the most interesting buildings in Portland and every picture taken of it has to have those ugly power lines spread across--unless you clean it up in Photoshop. Imagine ugly power lines in front of every picture of Portland Head Light.
You must log in or register to reply here.
Share:
Facebook Twitter Reddit Pinterest Tumblr WhatsApp Email Link