No updates or developments to report, but since we have a nice new subforum, I figured I'd spin off a new thread to post this. A guy on YouTube has been making some micro-documentaries on interesting Rhode Island landmarks, such as the Crook Point Bascule Bridge, and he just released one about the Apex building:

ProJo: Stall tactics and abuse of power alleged as Apex saga drags on in court

The owner of the little-used Apex department store complex is suing Pawtucket to block the city's attempts to seize the property and redevelop it.

Lawyers for four entities calling themselves "the Apex companies" filed a complaint in U.S. District court last week "to stop the systemic abuse of power" by city officials who have "relentlessly singled out the Apex Companies" and "tried to coerce them into giving up their properties."
Click to expand...

After the PawSox stadium deal collapsed and the team headed for Worcester, the city had been in talks with Gates about buying the Apex land.

Those talks broke off last October and Mayor Donald Grebien said the would begin the process of seizing the land by eminent domain.

Grebien proposed borrowing $20 million to take the land between Route 95 and the Blackstone River to create a waterfront park with a mix of apartments and shops inland.
Click to expand...

There is finally some news to report on the prominently located Apex site (along side Rte 95 and the Seekonk River). The City of Pawtucket this week has approved the purchase of the property for some $17.7M, well above its appraised value. The owner has done little with the property since the full fledged Apex Department Store closed in 1999. He has been cited by the city on numerous occasions for not properly maintaining the property. He however also held out for an extremely high sale price keeping it underused and languishing. This site was once the proposed location for a new PawSox stadium. When that failed, the city and the Tidewater developers pursued a purchase but until now had never been able to reach an agreement. 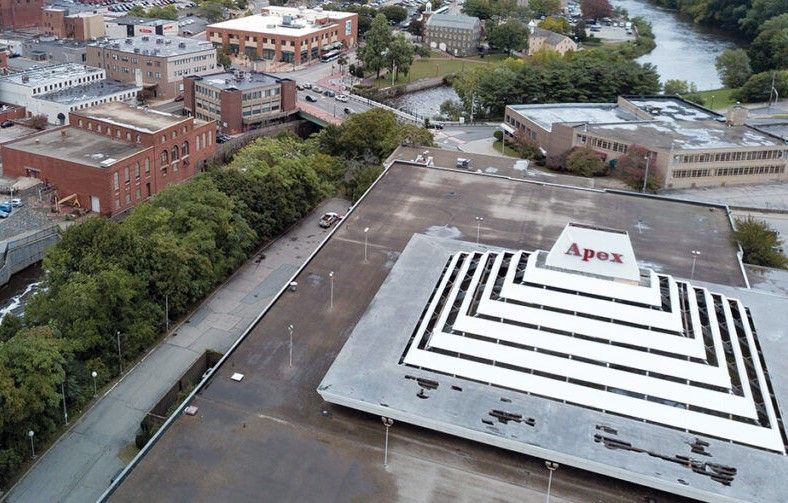 PROVIDENCE – The iconic Apex pyramid building seen by Rhode Islanders and others driving on Interstate 95 through Pawtucket is being acquired by the city’s redevelopment agency together with surrounding properties for $17.7 million under a settlement approved Tuesday night by community leaders...

My desire for some of this site would be for narrow linear parkland along the river's east bank which would eventually be part of a path that extended south from the Main Street Bridge and falls by Slater Mill to the Festival Pier Park and Pawtucket Boys Club land. I personally would like to see the rest of it go toward something that would bring good jobs to the city. Pawtucket has had some significant setbacks in recent years losing its 100+ year old 300+ bed hospital in 2019 and the Pawsox in 2020. The city's current largest employer, Hasbro, has been rumored to be considering a move to consolidate its offices into a single location. It's headquarters presently occupies three separate office sites in Pawtucket, East Providence, and Providence. My own preference would be to see Hasbro build a new HQ here with a retail store and toy museum. The location cannot much be beat for the number of eyes that pass it each day. I am not in favor of another entertainment venue as has been mentioned possibly being incorporatated into the soccer Tidewater Development. Any jobs associated with such an endeavor would not be high paying and the nature of such a public participation business would always be at risk.
Last edited: Jan 4, 2022
You must log in or register to reply here.
Share:
Facebook Twitter Reddit Pinterest Tumblr WhatsApp Email Link