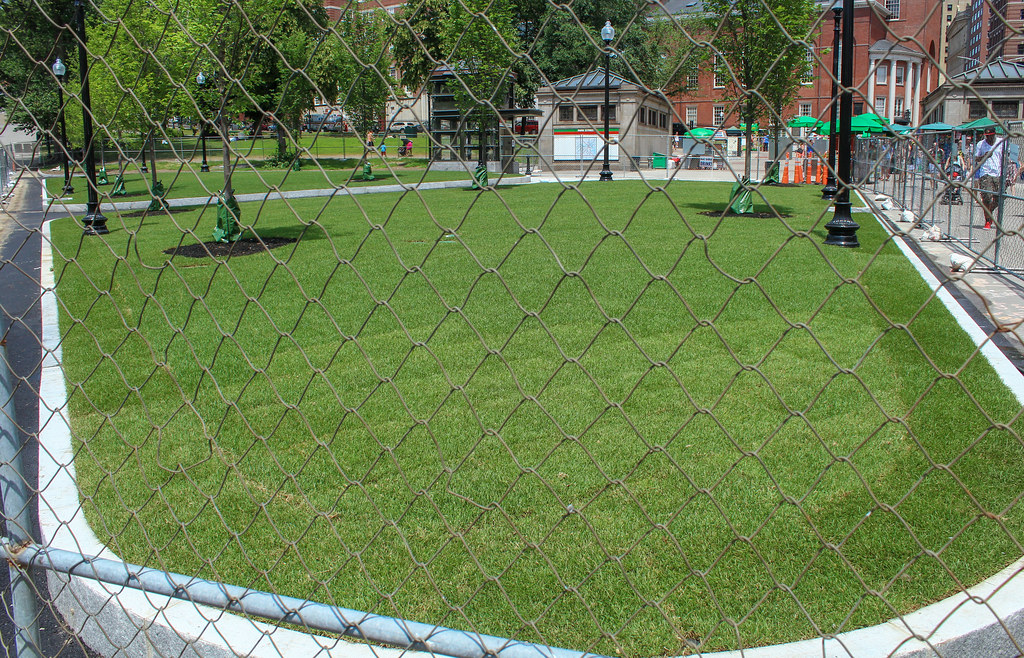 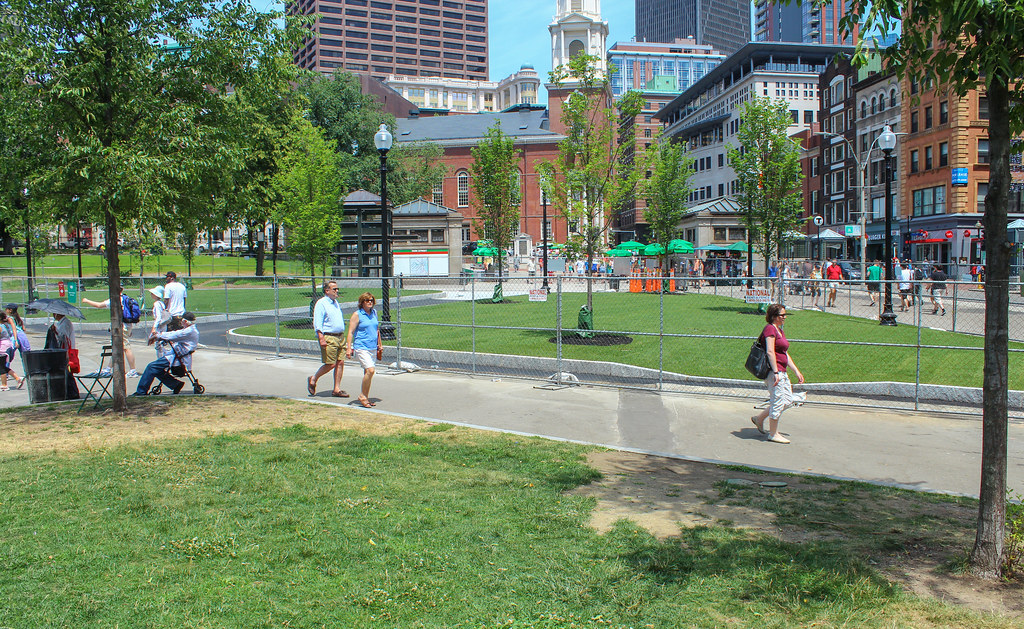 Looks really good! Much more respectable than before. Aside from mowing the grass, everything looks like it is left to take care of itself. No seeding, fertilizing, etc... Lets see if they will actually do so in order to maintain the current look. I'm not too confident, since the state seems to always build stuff and then fail to maintain it, but I'll hold out hope that we can have a decently landscaped Common.
S

Is there a plan available for this project anywhere? I noticed that they tore out a bunch of the planters along Tremont St and replaced them with asphalt. It would be interesting to see what they're going to do there.

From what I've read there's a plan to restore the wrought iron fencing along this end of the common. I presume it'll look similar to the Boylston St. end of the Common. I also got a reply from the Friends of the Public Garden that there are plans afoot to redo the area around the visitors' center, so I hope there will be a continuation of the fence to complete the street. There was once a rather wonderful monumental gate to the Common at this location, across from West St. with lanterns, etc. Wish they could restore THAT!

Part of the fence has been installed.

The slide show on this site shows the State House with out the tree the blocks the view:

Some other interesting projects are on the Solomon Foundation page

nice projects on that site
J

Lord this is a long article.

City parks officials are planning a $3.5 million restoration for a swath of the Boston Common where the sidewalk is buckling, bricks are missing, and an aging trio of bronze statues have not had any TLC for years.

Parks Commissioner Christopher Cook promised a top-to-bottom redo of the Parkman Plaza, a dreary patch of the nation’s oldest public park. It includes the paved semicircle that is home to the visitor information center, where at least 500,000 tourists stop by each year seeking guidance to the city’s popular sites.

Cook said the department expects to start work this year, beginning midway down Tremont Street. Next year, the focus will be on the Boylston Street side, nearest to Tremont — a short walk from the Park Street station entrance on the Red Line down to AMC Loews theater near the edge of Boylston Street.

“The Common has suffered from a lack of investment in infrastructure,’’ Cook said. “Certain conditions that we take for granted in other public spaces have been left by the wayside for a long time. This will help the park function better and change people’s perception of it.”

Over the past two years, city officials conducted a study, interviewed people, and consulted with various groups — including the Greater Boston Convention & Visitors Bureau, Freedom Trail Foundation, and the city’s Landmarks and Art commissions — to gain a better understanding of how the space was being used. They wanted to know what was working well, and what wasn’t.

The city is planning $3.5 million in repairs to a stretch of the Tremont Street side of Boston Common, from the area in front of the visitor information center to Boylston Street.

They determined that while the space was frequently used by tour groups and tourists, it was in poor condition.

“The paving, the benches, the flagpoles suffered through the years,’’ said Margaret Dyson, Boston’s director of historic parks.

Dyson said that when completed, the newly renovated section of the park will be outfitted with new seating, a new entrance to the visitor’s center, and improved space for tour groups.

Cook outlined the improvements in his department’s five-year capital plan, which was included in Mayor Martin J. Walsh’s proposed budget. The City Council’s Ways and Means Committee is combing through the budget before bringing it to the full legislative body for a final vote in June. The Boston Landmarks and Art commissions must also approve.

The planned improvements are part of the city’s long-term strategy to revitalize the aging Common, which spans nearly 50 acres. The city is also targeting other treasured open spaces, including Franklin Park.

The capital plan calls for spending $1.51 million on pathways and other improvements in Franklin Park, which borders Jamaica Plain, Roxbury, and Dorchester. Cook is also seeking more accessibility for the disabled at the city’s other parks.

Other efforts to boost Boston Common were undertaken by developer Millennium Partners, which is building in Downtown Crossing. Around 2000, the developer spent $1 million to erect a fence and restore the side of the park along Boylston and Avery streets, said Joe Larkin, a principal at the company.

Back then, Larkin said the company also promised to donate $50,000 annually to the Parks Department for 20 years and has kept its pledge.

The latest planned renovations of the Common follow work completed in recent years closer to the Park Street side.

In the past five years, the city spent $783,000 on improvements on Boston Common. The costs include $133,000 for repairs at the Soldiers and Sailors Monument, and $600,000 to restore the deteriorating Brewer Fountain, a one-of-a-kind bronze sculpture created for the 1855 World’s Fair in Paris and donated to Boston by Beacon Hill merchant Gardner Brewer, according to Friends of the Public Garden.

Another $600,000 targeted repairs on the Common, the Public Garden, and the Commonwealth Avenue Mall, parks officials said.

Initially installed near the Beacon Street side of the Common in 1868, Brewer Fountain was moved in 1917 to its current location, near Tremont and Park streets.

To complement the fountain’s renewal, Friends of the Public Garden, which raises money and works to preserve the city’s first parks, launched a $4 million privately funded effort, beginning in 2011, to revitalize the area around it, up to the State House.

That section of the park now boasts cafe-style tables shaded with linen-colored umbrellas, a rolling reading room stocked with magazines and books, and summer jazz concerts.

New trees, restored turf, pathways, and curbing were installed, along with a historic iron fence.

Elizabeth Vizza, executive director of Friends of the Public Garden, said the Boston Common improvements have been a long time coming.

“This next piece is critical to keep that momentum going and keep construction going,’’ Vizza said. “It’s our front door to the world. Many people come here to visit. And it’s really important to have a good-looking front door.”

Dyson, the director of historic parks, said the planned Common project is costly because the area sits atop the subway, and special care is needed to ensure a smooth reconstruction.

“That part of the park appears to date to 1959, in terms of the furnishing and the surfacing of the park,’’ Dyson said. “They are beyond their useful life and need to be replaced.”

Parkman Plaza, dedicated in the 1960s, is adorned with bronze statues by sculptor Adio diBiccari and his brother-in-law Arcangelo Cascieri. The near life-sized statues represent Boston’s intellectual, spiritual, and industrial life, according to the Boston Art Commission. One clutches a book, another a jackhammer, and a third kneels with palms outspread as if in prayer.
Click to expand...

"In the past five years, the city spent $783,000 on improvements on Boston Common. The costs include $133,000 for repairs at the Soldiers and Sailors Monument, and $600,000 to restore the deteriorating Brewer Fountain, a one-of-a-kind bronze sculpture created for the 1855 World’s Fair in Paris and donated to Boston by Beacon Hill merchant Gardner Brewer, according to Friends of the Public Garden."

Really pleased to see this level of investment in this invaluable public heirloom .. its hard to believe, but all together this is nearly a Lawn-on-D quantity of spending! [/snark]
F From Friends of the Public Garden.
https://friendsofthepublicgarden.org/2019/01/17/boston-common-master-plan-january-17-2019/
K

It strikes me as another lost opportunity. One would think that for such a large investment in the most visible public space in Boston and the oldest public park in the country they’d have sought out the best landscape architects and planning firms possible instead of the local yokels the city has engaged for the project. They certainly don’t have an impressive portfolio.
S

I didn't see any reference to the proposed MLK memorial. Several of the finalists have designs that would take a fairly large space.

Also, the National Park Service (50 percent), the Friends of the Public Garden and the city (50 percent) are funding the $2.8 million restoration of Saint Gaudens' high relief monument to the 54th Regiment, and its commander. This will be done in 2019.
https://friendsofthepublicgarden.org/shaw54th/

Does anyone know what happened to the fourth statue in the set? It was removed when the new headhouse next to the plaza was built, but never relocated. Hope it hasn't disappeared as happened to the two lions of the set of 4 that were supposed to adorn the Chinatown gateway.
S

Padre, what was the subject of the now-missing fourth statue?
See also:
https://boston.curbed.com/maps/boston-common-things-to-do

Harvard when building Library Park in Allston unearthed granite sculptures of lion heads. These were incorporated into the park. Where the lions had come from originally was never determined.

kmp1284 said:
It strikes me as another lost opportunity. One would think that for such a large investment in the most visible public space in Boston and the oldest public park in the country they’d have sought out the best landscape architects and planning firms possible instead of the local yokels the city has engaged for the project. They certainly don’t have an impressive portfolio.
Click to expand...

Looks to me like they've already done a lot of work on the Common in recent years. That familiarity is probably a good thing.
S

More money raised for the King Memorial, which will honor MLK and Coretta Scott King. Apparently enough money is on hand that selection of the winning design and construction can proceed.

CSTH said:
Looks to me like they've already done a lot of work on the Common in recent years. That familiarity is probably a good thing.
Click to expand...

Perhaps. That is how Boston rolls after all. Functional mediocrity is the name of the game.
C

In this case at least, bringing in a hot-shot firm to do some kind of landscape architecture makeover would be a big mistake. (And hopefully the MLK work won't be a trojan horse for that either).

IMHO the Common could use some high quality refresh & incremental improvements that builds on the well-established template (as has happened recently in the area around Park St.) and NOT any kind of rethinking or re-design.

Two of the candidate designs have been tossed. The three remaining proposals are being scrutinized.

The group is asking, for example, if specially designed bells and pulses of light in the two towers in “The Ripple Effects” will actually work. And will the mirror-finish bronze in “The Embrace” discolor or scratch from repeated visits and the ravages of snow, ice, rain, and sun? “The Embrace” was the public’s top choice when the proposals were put on display last fall.

“We know we can construct something beautiful within the budget we have,” said Paul English, a software entrepreneur who founded King Boston. “I think some designs are more expansive than others, so we’re trying to get a sense of construction costs and maintenance on each of the designs.”
...
Weston & Sampson, the firm evaluating the three proposals, is also developing a new master plan for the Common, America’s oldest public park, founded in 1634.
.........
Elizabeth Vizza, executive director of Friends of the Public Garden, said the group wants to ensure the memorial’s design will be beautiful, fit neatly within the park’s pathways and other features, and stand the test of time.
Click to expand...