Someone walked by the Broadluxe condo conversion recently and says it looks like nothing is going on there.

Anyone else heard any rumors?

99-105 Broad Street, is the address, it's a renovation of an existing building, with added floors (I think).

I think it's pretty much complete. There were cranes up for a few months and now they they are down.
The website is selling units:

"Broadluxe" gets my vote for the most pretentious and idiotic sounding name in a city crowded with contenders.

... i dunno, I have much more disdain for the misspelled Newbry....
P

Is it possible that there are people who would be more likely to buy at Broadluxe than at 80 Broad Street?

I doubt they'll keep calling it Broadluxe after they've sold out all the condos.

Here's how it looked yesterday 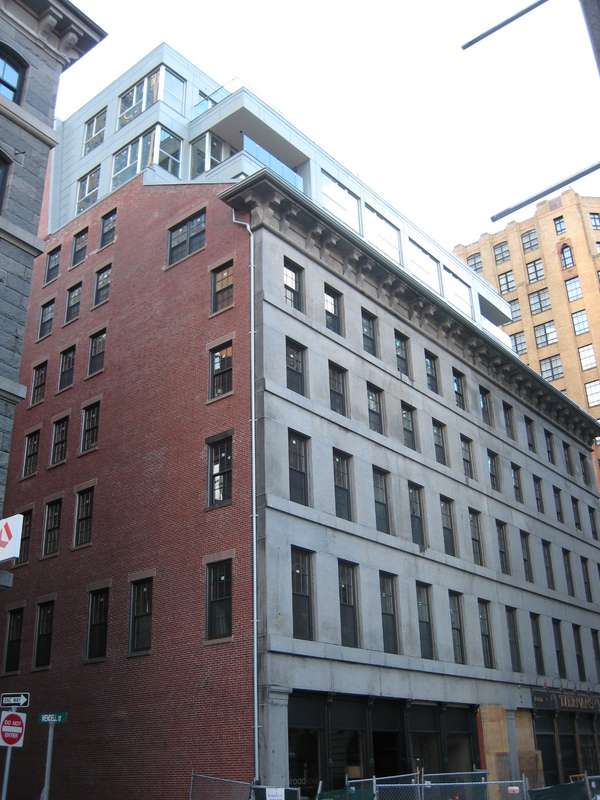 Question: this pocket of downtown around Broadluxe and Custom House St, I noticed that there's a fair deal of new (Folio) or 1980s-vintage construction (around 10 stories high) in the area. How did this area come to be?

This is showing Folio (center) and two 1980s buildings 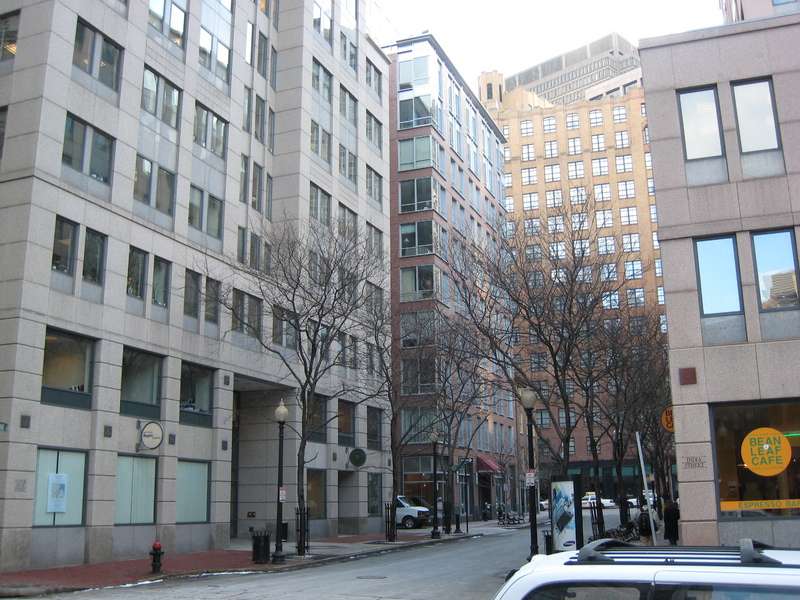 Financial troubles have shut down construction of the 44-unit Broadluxe condominium project on the edge of Boston's Financial District for the past two weeks, setting the developer back in a time of market uncertainty.

The project, located at 99-105 Broad St. near the future Rose Kennedy Greenway, is a little more than month away from its scheduled opening.

Chip Norton, a manager at Boston-based Franklin Realty Advisors Inc., declined to give specific reasons for the recent financial difficulties.

"Basically we've had some cost overruns and delays in delivering the building," said Norton. "We are working with our lenders to restructure the existing financing."

Certain neighborhoods like the Financial District have been sluggish to catch on with buyers who are not sure the area has matured, said Debra Taylor Blair, president of the Listing Information Network, which tracks sales in downtown Boston.

"When you move in toward the Financial District, it's just that the neighborhood isn't there yet," she said.

At 99-105 Broad, contractors from A.J. Martini Inc. were called off the job after Franklin Realty Advisors failed to pay the Winchester construction company for work.

"There were some funding issues," said Paul Martini, chairman of A.J. Martini. "We hadn't been paid in a relatively brief period of time and were somewhat concerned."

In addition to a $19.1 million construction loan from TD Banknorth, Norton said there is other capital invested in the project but wouldn't say if it was private money or through another lender. The project was originally slated to be finished by the end of last year, but Martini said Franklin Realty ran into problems when it began converting the seven-story, brick-and-beam structure built in 1888.

Martini said the construction involved tying two historic buildings together, which required the relocation of elevator shafts and staircases.

In addition, there were concerns about whether the original buildings were strong enough to support a three-story addition. Martini said the age and condition of the buildings caused the project cost to escalate by about 10 percent.

"Rather than continue down an unknown road, we took them to task," said Martini. "There was some concern on our part where the money was coming from."

Franklin Realty Advisors' Norton declined to comment about the residential market or location of the project and whether either had an effect on the construction schedule. He also declined to confirm if any units had been pre-sold, but did say he expected Broadluxe to be open "very soon."

Located a block away from another condo project called Folio Boston at 80 Broad St. -- where an auction was held last year to sell the remaining 34 units -- Broadluxe may have fallen victim to bad market timing. Condominium sales have cooled since 2005, said Matthew Blackham, a project analyst with Tambone Investment Group, which converted an existing commercial building at 199 State St. into Greenway Place, a 13-unit luxury loft project.

Blackham said five of the 13 units at Greenway Place have been sold for between $850,000 and $1.4 million. Though sales of condos have slowed, Blackham said he's been able to hold the per-square-foot price for the units, which are located directly in front of the future greenway.

"The market conditions have certainly changed," said Blackham. "We would like to be sold out but we're fairly happy with the sales we've produced to date."

Greenway Place and Folio Boston opened in the first half of 2006, giving the developers the chance to capture pre-sales during construction. As Franklin Realty works to arrange additional financing, the project will open at a time when fewer units are selling.

"About the time that we finished constructing the building, activity in downtown had slowed but prices remained the same," said Michael Rauseo, president of Suffolk Cos. and managing member of 80 Broad Street LLC, which developed Folio Boston. Rauseo said that during the construction of 80 Broad, which finished last June, he sold 65 of the 99 units.

Michelle Hillman can be reached at mhillman@bizjournals.com
? 2006 American City Business Journals, Inc. and its licensors. All rights reserved.
Click to expand...

this pocket of downtown around Broadluxe and Custom House St, I noticed that there's a fair deal of new (Folio) or 1980s-vintage construction (around 10 stories high) in the area. How did this area come to be?
Click to expand...

My guess is that these were surface lots resulting from old warehouses taken down for projects that never came to be or else for the old Artery...and were only replaced during the Massachusetts Miracle.
W

The Massachusetts Miracle is the term for the rapid economic growth of the state in the 1980s.
W

I know what it is - just being sarcastic.
G

Then you missed the golden age of Massachusetts bumper stickers like Dump The Duke!, Make it in Massachusetts, Don't blame me I'm from Massachusetts! (Nixon Era) and best of all... Welcome to Boston-Now Go Home!
Z

There was also the Barely Making It In Massachusetts bumper sticker with the thumb down.
I

It can only mean one thing ...

Mike Dukakis is only around 70 now, right? ... maybe he should give it another try ... I mean, everyone else is running, many with less qualifications!

Joe_Schmoe said:
"Broadluxe" gets my vote for the most pretentious and idiotic sounding name in a city crowded with contenders.
Click to expand...

I second that. Almost as stupid as the Gay-i-tee.
P

bosdevelopment said:
I second that. Almost as stupid as the Gay-i-tee.
Click to expand...

Broad Street is one of the streets that is supposed to be dramatically improved with widened sidewalks, trees etc. as part of Boston Crossroads Initiative.

TDBanknorth is taking steps to foreclose and auction off a partly built, $17 million luxury-condo complex near the Rose Kennedy Greenway, according to an auctioneer.
Tranzon Auction Properties said it?s been hired by TDBanknorth to conduct an April 17 auction of the Broadluxe, a partially finished, 44-unit condo complex across from Rowe?s Wharf.
A search of public records also indicates subcontractors recently filed hundreds of thousands of dollars in liens against the property.
Tranzon said developer Franklin Realty Advisors has done about half to two-thirds of work at the site, with about $2 million of upgrades needed to complete the job.


Franklin did not return repeated calls seeking comment, but TDBanknorth confirmed that it has begun foreclosure proceedings against the property. A Web site touting Broadluxe to potential condo buyers described the planned development as ?a stunning new nine-story residential property in the heart of downtown Boston.?
The site said units would cost about $400,000 and up, ranging in size from 500 to 1,800 square feet and would include exposed brick, white-oak floors and high ceilings.
Trazon President Tom Saturley said he?s gotten good responses from developers and investors ?up and down the East Coast? about the planned auction.
?The timing is perfect,? he said. ?What?s going on with the Greenway and Broad Street is huge.?
The Broadluxe?s problems come at a time of growing mortgage foreclosures across the state.
Jeremy Shapiro of market tracker ForeclosuresMass.com said he?s not surprised to see a fancy development run into problems. ?Foreclosures cut across the whole spectrum, from the extremely low end to the ultra high end,? he said. ?Contractors will get (mortgage) money to start a project, but end up defaulting because they can?t finish the work for one reason or another.?
Click to expand...