George_Apley said:
Man, I only have a few vague memories of the Central Artery as a kid, mostly from Aquarium trips. What an awful thing it was.
Click to expand...

I remember coming back from my cousins house on the South Shore at 1am and being in a non moving traffic jam. At 1am.
F

I remember Raymond's on Washington Street. "Where U bot the hat".
F

vanshnookenraggen said:
I remember coming back from my cousins house on the South Shore at 1am and being in a non moving traffic jam. At 1am.
Click to expand...

Literally the only time I have ever experienced continuous speed limit travel on the old Artery was during changeover weekend in 2003 on the last 24 hours the temp SB alignment was open before shifting underground. Also at 1:00am...after we'd been forewarned all month to stay the hell away from Downtown for that weekend.

And that was when SB was riding on the ex-NB lanes and large chunks of the empty other side had already been torn down. I don't think I ever experienced the full traffic-bearing structure at >20 MPH stop-and-go ever in my life.
D

This must have been quite the sight. During my time at BLS a teacher once stated that Avenue Louis Pasteur was meant to be a proper French avenue with an island all the way town the length of it, but one of the buildings was built encroaching on the potential street so they had to make it a regular two way with that awkward circle at the end. I never had any reason to doubt him but I am curious if that was actually the case.

I actually have some positive memories of the Central Artery and SE Expressway. My father delivered meat out of Newmarket and if I went with him then driving under the artery meant free pizza or a steamed hamburger from Joe and Nemo's. Back then rt. 93 from the south had a lot of interesting landmarks (to a kid) like the Santa and sleigh on the roof in Chinatown. I remember one time we got off near South Station and there was an effigy of Judge Garrity hanging from a light post. The poor man had to reluctantly explain Busing to a suddenly very curious elementary school kid. (The kids knew better than anyone there was more crazier shit was going on than usual) Anyway, most days while he was busy I would walk around the area stare at the modernist mural, hang near the lollypops or visit the porpoises. At the end of the day we would go to mass at the Shrine because that's what you did in those days if you went in Town.
D 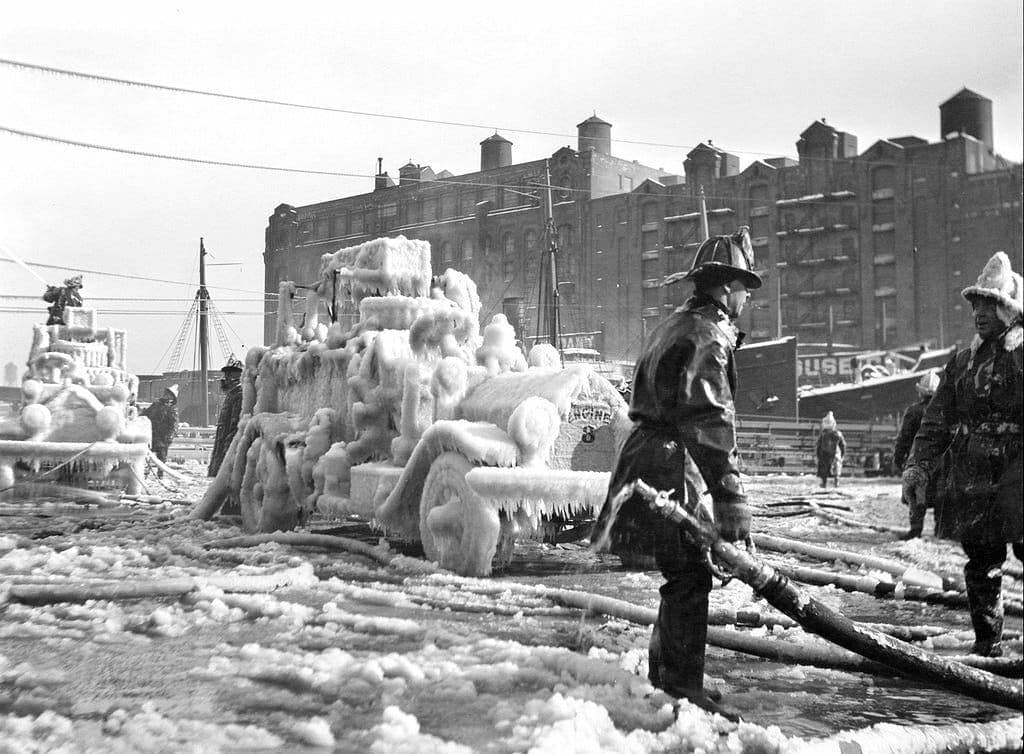 But despite its design flaws it succeeded as the most vibrant civic space in the city at that time. It was a safe place in the city that you could bring your family for concerts or events. Copley Square was just concrete, Kenmore was crappy and the Common and Esplanade were viewed as places to get mugged. I was dragged to a million things there and my big problem was the steps were torturous to kids. They would make you fall forward going down or exhaust you when climbing them.
B

How many city vehicles and how much "temporary" fencing would you see in a picture taken from the same spot today? A lot of City Hall's failures can be chalked up to pure apathy.
D Nice picture but is it of a healthy vibrant urban area? I am not a fan of Urban Renewal but I think we often fetishize the good ole days that weren't.

And nearly 100 years later we still have those same 2 empty parcels on Brookline and Deerfield.
D Frickin' Storrow, man. At no point have I ever felt the presence of the river in Kenmore Square; but in actuality, it's damn near waterfront.

Really cool seeing Newbury built up on both sides all the way to Brookline!

Most of the buildings here are gone, particularly to the right of the train tracks. Common knowledge to most here, I'm sure, but it never fails to blow my mind.
N

DZH22 said:
Just found this pic on reddit. The other pics in the link are from Minnesota, not Boston.
https://www.reddit.com/r/boston/comments/l1xdd8
View attachment 9804
Click to expand...

The second one does not look like Boston.
S

It most definitely isn’t. My guess is Buffalo.

The first and third pics aren’t Boston either.