Charlie_mta said:
Exactly. It used to ba a true square that served diverse groups of people, but now appears to be very student-centric.
Click to expand...

Could be worse. Could be Kenmore.
C

bigpicture7 said:
With regard to a), I would guess fewer 19-25-y.o.'s "browse" for these things anymore; many of such are simply downloaded on-demand / ordered from Amazon. And in terms of b), I suspect most kids look up ratings on google maps or yelp in advance...there's much less trial-and-error. These, to me, are fundamental behavioral shifts that wouldn't have jibed with the old square (nostalgic as I am).
Click to expand...

I think that's a very accurate assessment and I clearly see that with my two millennial children. You can expand the notion well beyond Harvard Square, simply look at the malls and brick-and-mortar stores in general. Why drive when you can click? I'm doing it now ...

BronsonShore said:
Bookstores
There are currently 6 bookstores within a five minute walk of each other in Harvard Square, including one store dedicated just to poetry. I highly doubt there is another urban neighborhood anywhere in America that you can say this about.

Restaurants
There's probably a greater concentration of great and interesting restaurants around Harvard Square than any other Boston neighborhood, save for the South End (where they're more spread out) and maybe Union Square. Alden & Harlow, Waypoint, Longfellow Bar are as trendy as it gets and all are constantly experimenting. Cafe Sushi is one of the best restaurants inside 128. Benedetto is better than just about every restaurant in the North End. And places like Charlie's, Felipe's, Le's, Santouka, and Bonchon Chicken are all cheap, fun, and great.

Grimy
Yeah, the grime is gone (and so are the newsstands). That's a shame, it's also the life cycle of urban America. But, hey, Mr. Bartley's doesn't even have a bathroom, Cafe Pamplona is a mold-filled basement, and there are two tattoo parlors. You can find a little grime if you want it.


I never saw Harvard Square in the 70's or even the 80's. I'm sure we've lost a lot of wonderful urbanity since then. But it really seems like most of the people who complain about Harvard Square today don't actually spend much time there, or any other Boston neighborhoods, for that matter - because the fact is that Harvard Square is still unique, and is still filled with life. Only Central Square and Union Square come close to comparing, but Harvard still has more life on the streets than both of them.
Click to expand...

Johnnyrocket891 said:
Harvard square is unique? What is so unique about it today? Starbucks, Dunkin’ Donuts, Chase bank, Bank of America, Santander bank, CVS, chain restaurants. Harvard square back in the 70’s and 80’s was more filter around art. An artist’s view surrounded by unique small mom & pop style business’s. That’s what created the uniqueness of all the squares.

I wouldn’t be surprised if Harvard owns all 6 bookstores just to keep that concept in place.

Harvard square today is far from unique it’s more programmed for the bots they create out of the university.
Click to expand...

There's a vast middle ground between these two points. A lot of what "made Harvard Harvard" was wrapped up in nightlife, music scene, protest culture, restaurant and bar culture, and the unique shops. The music scene has long moved on, scattered between Allston, Union Square, and Central Square. The nightlife has gradually dwindled away, but it's also dwindling away in most parts of Boston outside of downtown. The protest culture has mostly moved online; young people can't be bothered to protest with their feet most of the time. Restaurants and a few unique shops are all Harvard has left of its old soul.

The restaurant scene is strong and a good mix of old and new, but increasingly dominated by local restaurant groups (high rents incentivise this). As an example, Grafton Street, Russell House, Park, and The Hourly are all under the same ownership. They're all good restaurants, but they're also all different children of the same conceptual parent.

The shop environment is declining rapidly, as it is everywhere. We've discussed this in other threads and I've expressed that I have a problem with landlord's short term financial incentives to demand ever higher rents coming at the expense of a vibrant urban environment. Harvard Square is a good example of this happening. I've heard rumors that Cardullo's lease is up next year. That store is among the last pieces of Old Harvard left. If it goes it will be one more nail in Harvard's coffin of becoming just another iteration of the same urban 'place' that has come to exist in many neighborhoods and cities.


Blackbird said:
Could be worse. Could be Kenmore.
Click to expand...

This is true. Kenmore is truly dead. Harvard is alive but losing the last pieces of its old soul. Harvard is still a "place" that people visit to walk, shop, eat, and play. Kenmore has become just a transportation hub at a busy intersection with a hotel that is adjacent to the ballpark.
N

I did a few spot checks of Harvard Square properties on the City of Cambridge's property database-- I'd like to take a more systematic look when I have time, but for now, one thing that struck me was the number of buildings that belong to Harvard, particularly along Mass Avenue south of the square. Interestingly, several of those buildings have a similar last sale date: July 1978 (also, Harvard owns Hampden Hall, where the Harvard Book Store and Grolier are located, so maybe not too much of a stretch to imagine that the store's persistence is due in part to Harvard's beneficence). I wondered if the 1978 sales are just a coincidence or if they're tied into some other event (like the Red Line extension?).

That aside, George, I think you've accurately characterized what's happening in Harvard Square vis a vis the the scene. I'd maybe want to push back a little bit on the music front-- the Sinclair, Passim, and even Beat Hotel (or whatever it's called now) are solid options (though they cater to different audiences) and offer more than most neighborhoods. It's not Springsteen at the Harvard Square Theater, but it's not bad.

My feelings about Cardullo's are mixed. I realize this is all highly subjective, but they're too expensive and don't have enough selection to be a reliable pick up some beer or wine on the way home sort of place (same with the coffees and teas), and the deli counter is mediocre at best (you can get a better sandwich at the market on the corner of Brattle and Church, or even better, over at Darwin's on Mt. Auburn). Some of the little British and colonial themed bric-a-brac is sort of charming, but I would imagine is more of a tourist item. But again, I understand that these are subjective distinctions. For me, if and when they close down Bob Slate Stationer, that will be the end of Harvard Square .

Fair enough. I personally like Cardullo's for the imported foodstuffs from Britain and Germany that's hard to find elsewhere, and more esoterically as an outpost of "the old days" in the center of the square. I'm not old enough to remember "the old days" but my mom grew up walking to the T from Walden Street in the 60s and 70s and I've absorbed a lot of her nostalgia for the square of yore.
B

The border cafe is on fire rn. This could be a huge loss to the square

Probably a kitchen fire. The flames/smoke were coming from the hvac exhaust. Hopefully it's mostly equipment damage and HVAC repairs and not a lot of structural damage to the building.

Photos by Nic Antaya for the Boston Globe 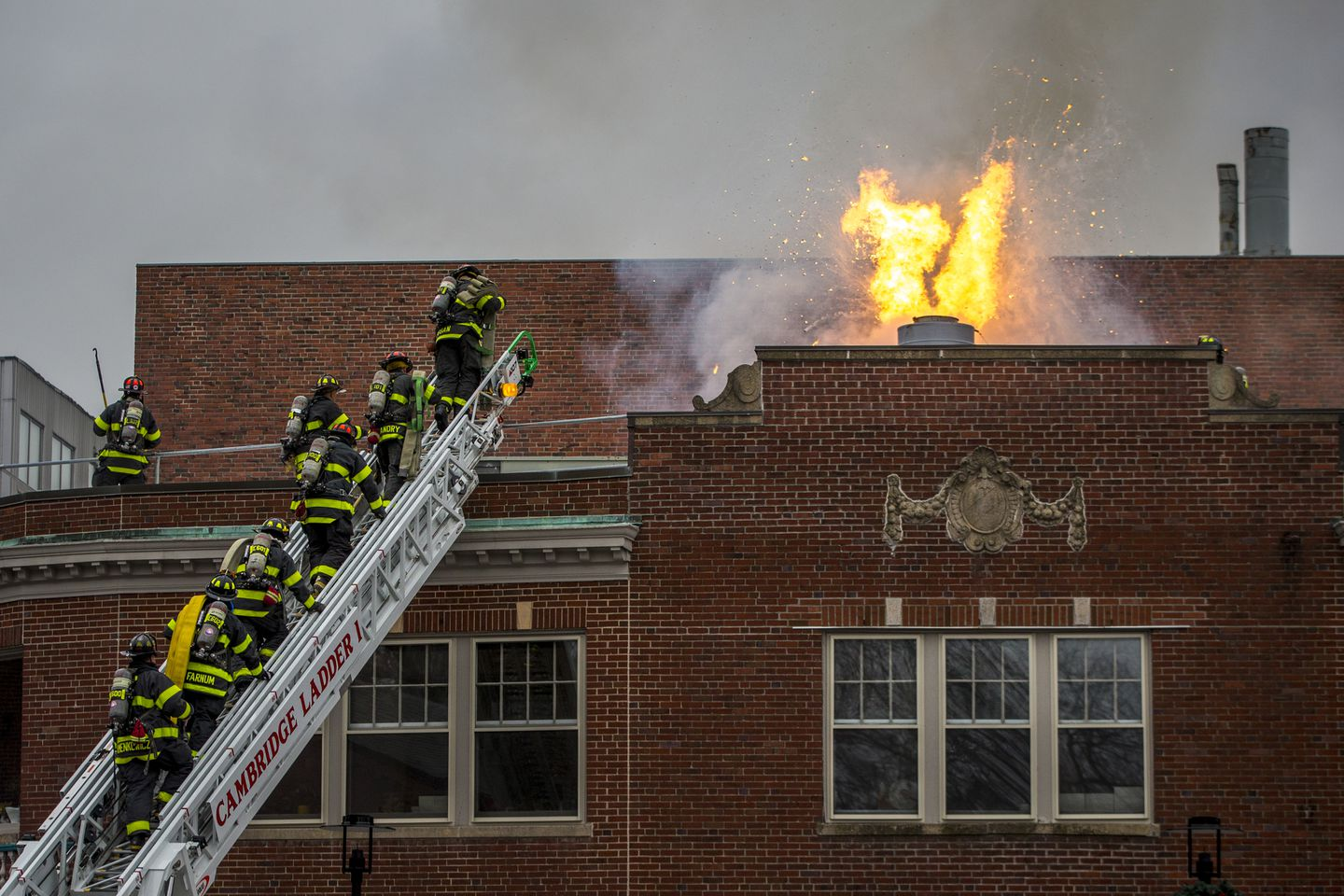 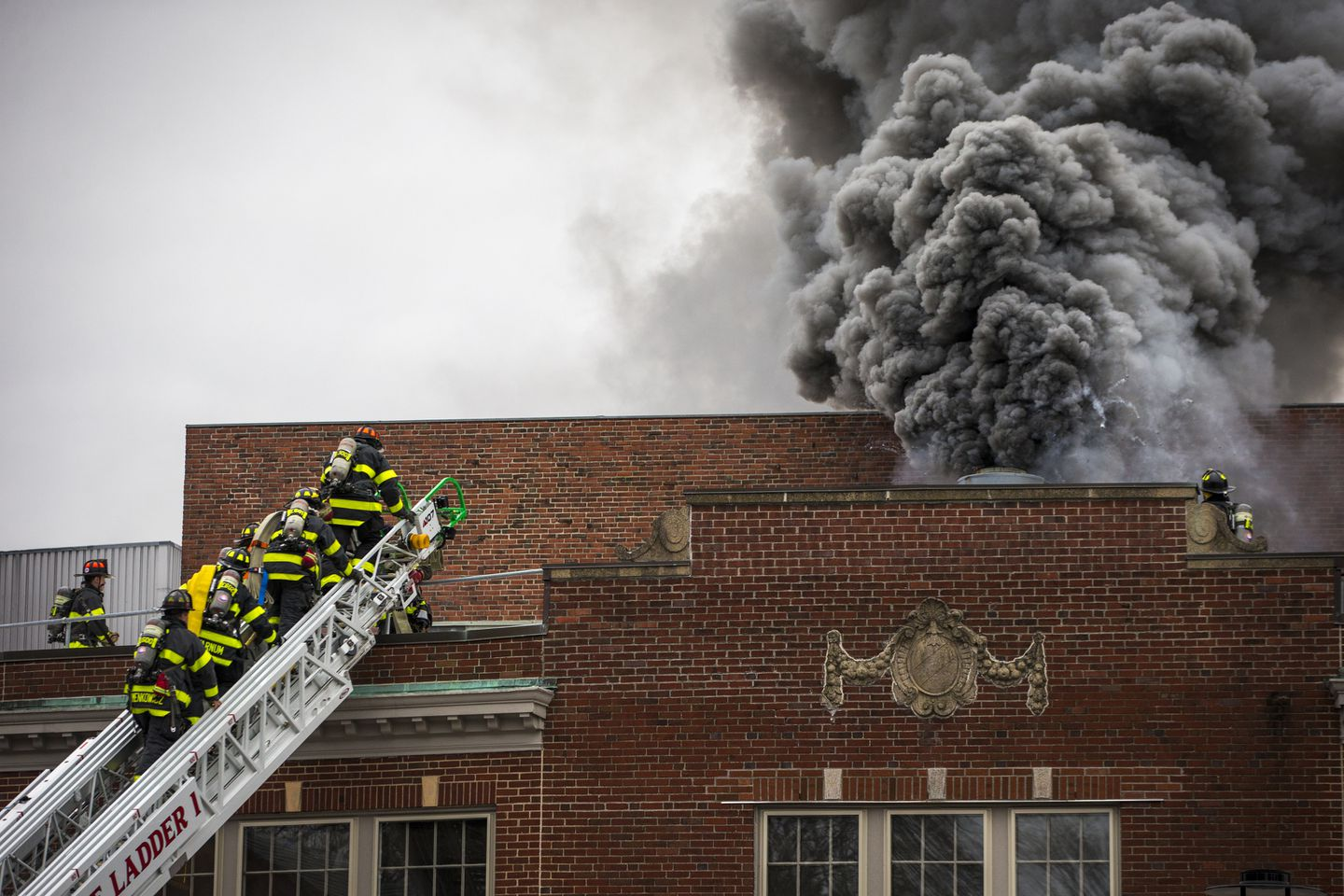 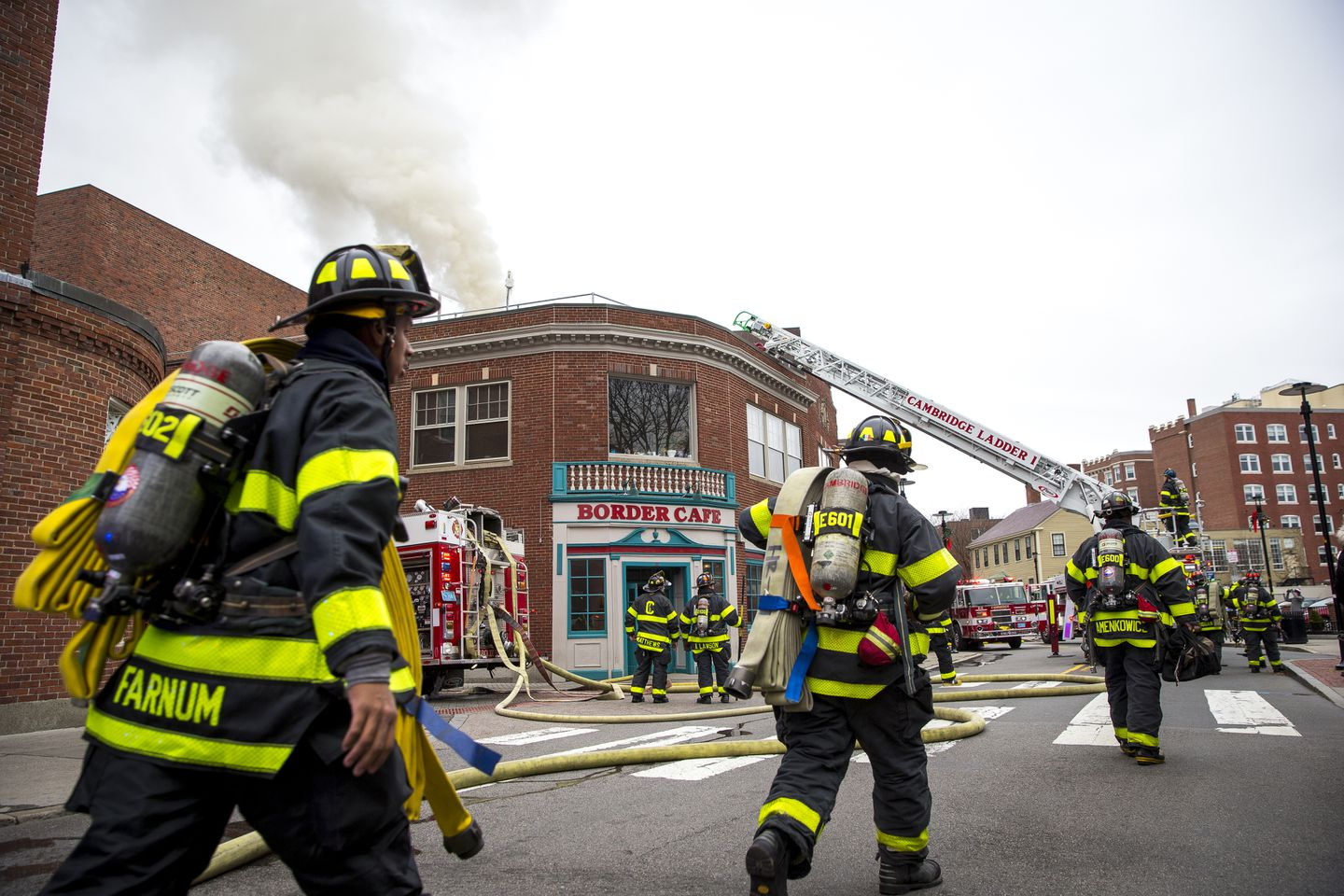 According to someone that works there, there's minimal damage on the inside... mostly water and smoke damage. Varying reports of re-opening in a few days to a few weeks. Source: Reddit 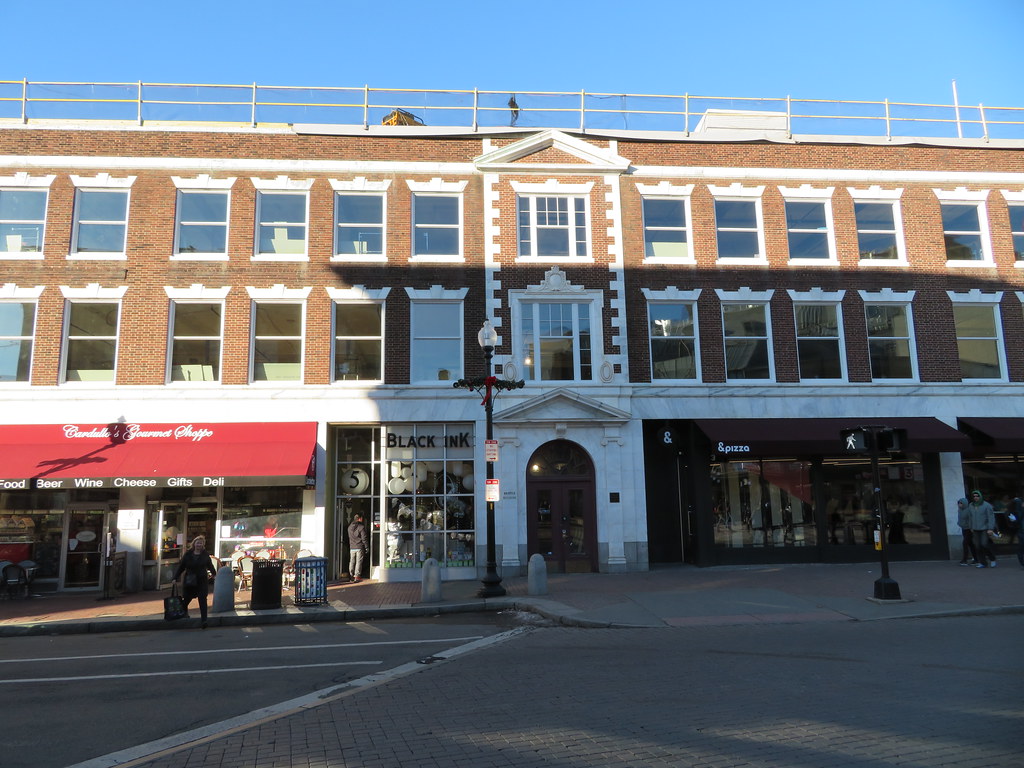 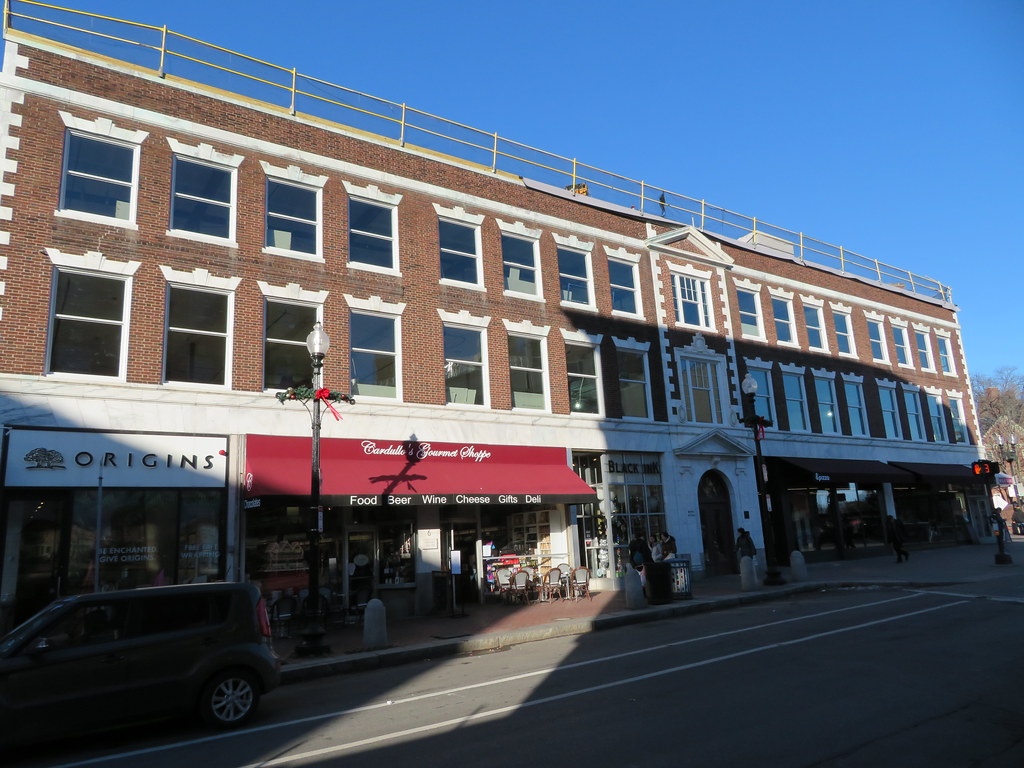 stefal said:
According to someone that works there, there's minimal damage on the inside... mostly water and smoke damage. Varying reports of re-opening in a few days to a few weeks. Source: Reddit
Click to expand...

I walked by last week and the first floor was more or less gutted????
R

They have a permit posted for fire remediation work. I expect they will take the opportunity to refresh the interior from its mid-90s chic.

Tangentially related: Down the block, they have finished converting the old Fire & Ice into office space. However, they have left the old sign and CRT on the exterior wall, like a weird museum piece.
W

RandomWalk said:
They have a permit posted for fire remediation work. I expect they will take the opportunity to refresh the interior from its mid-90s chic.

Tangentially related: Down the block, they have finished converting the old Fire & Ice into office space. However, they have left the old sign and CRT on the exterior wall, like a weird museum piece.
Click to expand...

Damn!
I liked Fire and Ice -- silly idea -- but unique -- now we see that everyone's idea of the "Old Harvard Square" is different:
for example in no particular order my reminiscences over nearly 50 years of visiting Harvard Sq.: