The proposed project includes modest modifications to buildings 1 and 9, redeveloping and repurposing of buildings 5-8 while maintaining the Citgo sign and construction of a 8 story 165,000 sq office building where buildings 2-4 currently sit.

Do you have a link to the story? The tweet doesn't say much. Which building is which number?

Thread naming convention, people! It's right there on every thread!

Steve Adams has two tweets with screenshots of the LOI.

At 8 stories, I guess this render is out.
J

That corner building must be retained.

Nuke this proposal from orbit
D

If they build 8 stories on that corner, and unless the setback is improbably deep, it seems like points west (i.e. the marathoners' view coming up Beacon Street) would lose their line of sight to the sign. Then again, they're probably supposed to lose that view when Fenway Center Phase 2 happens in the mid-2070s, so maybe they argue it's just hastening the inevitable. (ETA: maybe Fenway Center doesn't impact that corridor because it's off to the side? I was surprised on Street View just now how clear that sightline actually is and from how far away you can see the current corner building.)

I'll never understand Boston's obsession with the Citgo sign. I'd be happy to see it torn down. It's tacky and out of place, not to mention it's idolizing a primary contributor to climate change and a failed communist state.

Kenmore, like a mini version of Times Square, is a great place for a large, garish, Iconic Thing®, useful in wayfinding and placemaking. I would never want to lose that.

The natural, urban thing for Kenmore is that it have the buildings that go with being a major transit-and-leisure hub, including real ads for real stuff.

By now, the CITGO sign is as fake as the unicorn and lions on the Old State House, an icon for a commercially-dead brand, but at least at theOld State House the building & brand are a historic whole.

Imagine if New Yorkers had grown too attached to the signs at the center of Times Square that read "Canadian Club" and "Admiral Television Appliances" (for 30 years?) We'd think them ridiculous if they'd grown so attached to it that they couldn't let real urban commerce and density happen at the apex of Times Square. 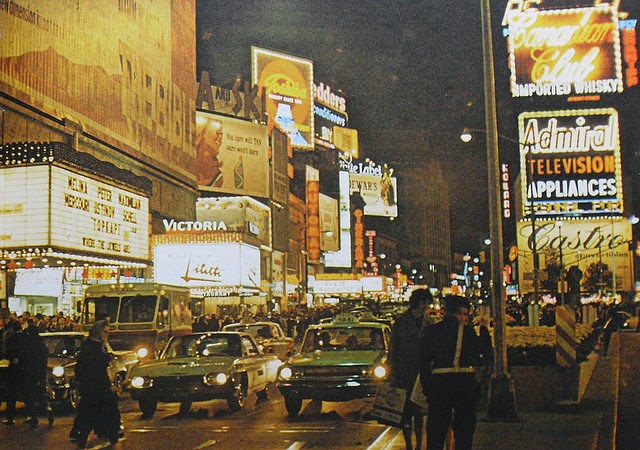 I recall that there are indeed protected signs in Times Square.

bdurden said:
I recall that there are indeed protected signs in Times Square.
Click to expand...

Maybe you're misreading/misremembering the controversy from 2015 in which the Feds initially asserted that the Highway Beautification Act of 1965 would require the NYC to limit the billboards scope? I can only find references to the start of the controversy (from May 2015 and July 2015). But the narrative from that time supports that what New York treasured/protected was a proliferation of signs, and not a focus on one in particular.

My first reaction when first saw this in Boston was - WTF!?
Still have that reaction, actually.
N

Keep it. Are we to erase all objects in our midst that don't meet our current cultural standards? Really? Think about it. It represents those negative things only to the obsessively sensitive. Have we become that thin-skinned?

It is a reference many of us grew up with, a place-marker we counted on, a recollection of an earlier time that conjures none of the political issues some here deem so important.

Do we really need examples in other cities to make a case for our own preservation? I hope not. That's a slippery slope.

It's fun, it's silly, it's colorful, it prompts questions, it's a sign of an era and it's location. In an era where so much appears generic, maybe we need more things like this.

This article documents that New Yorkers like neon signs, and that they've become "nearly impossible to find" and describes the status of some as extant or lost. I find this generally supportive of my contention that NYC likes its garish signs, has identified a role for them in the city's life, but has never carried it as far as specifying an exact sign that must be saved as is.

[Update: the Pepsi Cola sign in Queens is an exact sign that NYC has specified be saved as is, so I'm wrong as far as the 5 Boros are concerned, but still haven't seen a Times Sq sign landmarked]
Last edited: Jan 27, 2018

nm88 said:
Keep it. Are we to erase all objects in our midst that don't meet our current cultural standards? Really? Think about.
Click to expand...

I believe that the last time it was renovated, the question was "what is grandfathered here?" Was it the exact CITGO sign, or just "billboard of a certain size and brightness". At that time, rather than fight for a right to rent the billboard's canvas to the highest bidder, the owners settled for an a look-alike renovation (they upgraded to LEDs)

NIMBYs were hoping that by enforcing a "only CITGO is grandfathered" rule they'd eventually force the sign's removal (when it became commercially irrelevant and therefore no $ to extend its life).

I'd encourage people to address the question of why there can't be more billboards in Kenmore (make it a permitted use and let the market drive the message and technology, as is done in Times Square)
F