When a clean half of the power goes out in your house, it means that one (but not both) of the two "hot" wires coming into your house are out.

It happened to us today in this heat.
The tipoff:
1) Half of stuff goes out; others stay fully on (some of the "out" things can flicker)
2) No breakers on your panel are tripped
3) Your neighbors have the identical problem (proving it isn't your residence's service lines)

Dangerous tipoff:
4) Turning on things like your oven allows current to flow backwards from one side to the other, but since you're powering the whole block, you get a dangerous "in between" level of voltage (LEDs flicker, incandescents may or may not light). You can burn out 240V things if you try to run them on only 120V.

It happened to the whole block, so I knew that meant trouble on the transformer where, sure enough, you could see the one line had zapped off: 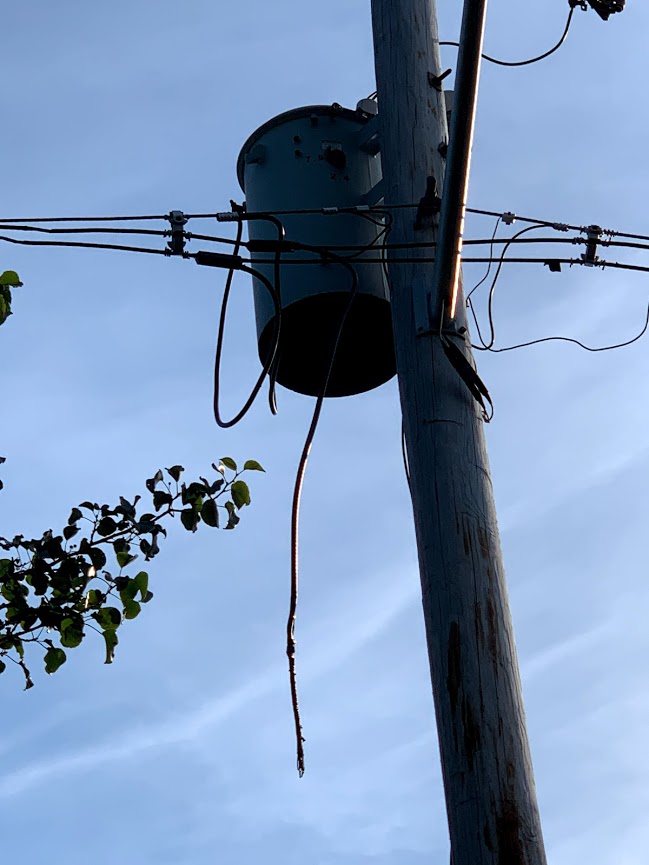 The lines worker (whom I was pleased to offer ice water and my restroom to) blamed it on cheap crimp connectors that have been the choice in new installations for the last 10 years, rather than copper. I didn't fully understand (like, are there "tin" crimp connectors and copper ones? I'd understand that the white metal melted easier than the copper)

Anyway, you could see the ragged end of the service line dangling after its connector melted (above)
Nice thing about National Grid: good outage reporting, good outage status, and once the lines worker was on scene everyone got a text (if they'd reported it via phone) saying "your power will be back on by an estimated 7:30pm. Actual time of restoration: 7:15pm
You must log in or register to reply here.
Share:
Facebook Twitter Reddit Pinterest Tumblr WhatsApp Email Link