I searched for a New Haven thread as I thought there was one...but guess not.

Anyway, this is sad. NH was planning to tear down its downtown highway (not sure why a city of its size ever thought it needed this) in a sort of Little Dig scheme, sensibly sans tunnel. Unfortunately, the idea got kind of half-baked, and now the city will wind up rebuilding essentially the same highway in the space where the old one was - albeit trenched, and lined with fewer parking lots.

Yeah I've heard the up-roar over this. Basically to get TIGER funding they went with a bad option that was quickest to build.

Looking closer, though, it appears that it will basically be an air rights development so you won't even see the highway. Not that this will make the area more urban which I guess is the big issue (that and more cars).
B

I live in New Haven. You'll find a few square blocks of urbanity in the city but the area around Route 34 has been permanently destroyed. New development is hardly "urban", mostly insular Yale/medical buildings. The whole city including downtown is car dependent, there's large parking lots including some free ones, bus service is atrocious, and very few places are actually dense. New Haven has a great street grid and bones and would be a perfect city for 300-500k people, the thing is is that it's severely underpopulated at 100k. 95% of the city is houses that are less dense than you'll find in Dot, mostly you'll find Victorian or similar single-family houses.

Hartford next [and better].
N 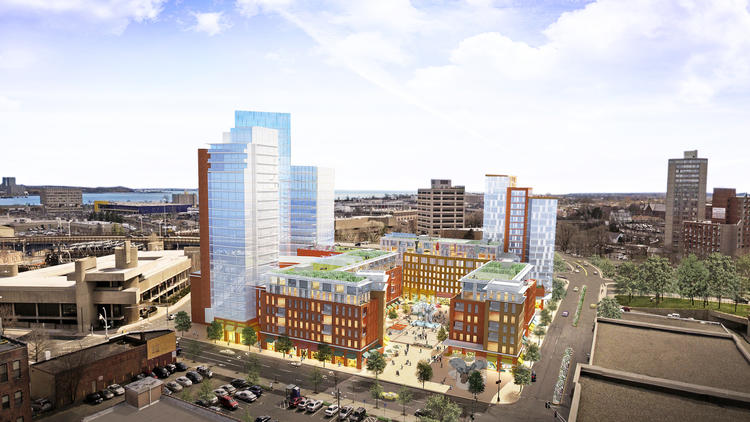 Construction at the site of the former New Haven Coliseum — envisioned since the venue was demolished in 2007 — could get underway next summer now that critical state funding has been earmarked for road and other improvements.

Gov. Dannel P. Malloy announced Thursday that the $400 million project is slated to receive $21.5 million in state bond money — a boost for a project that will complement other economic development in the city and create new jobs.

New Haven Coliseum Site Redevelopment
Plans for the Coliseum property are part of a larger vision to stitch back together New Haven's downtown, divided in the 1960s by the Route 34 connector, which was never finished.

The Coliseum development — a piece of the larger Downtown Crossing — is expected to include hundreds of apartments, a hotel, shops, restaurants and office space.

"The Coliseum site redevelopment is a vital component of the Downtown Crossing project and is a once in a generation opportunity to rebuild 5.5 acres of prime land in the heart of New Haven," Malloy said.

The state funding, which still needs State Bond Commission approval, would be used to reconnect South Orange Street across Route 34 toward Union Station, establishing a connection between downtown and the train station, the Hill neighborhood and the medical district.

The state's investment is being matched by $12 million from the city.

The developer, Montreal-based LiveWorkLearnPlay, would begin with a public square flanked by 380 mixed-income apartments; 35,000 square feet of retail space, enough for two dozen shops and restaurants; and 5,000 square feet of space for seasonal incubator businesses.
Click to expand...

Construction can now begin on luxury apartments at the site of Wooster Square’s former Comcast buliding.

The City Plan Commission Wednesday night unanimously approved site plans for the mixed-use development on Chapel Street by the corner of Olive. Construction is expected to be completed in 12 to 18 months.

Frank Caico of developer Spinnaker Residential LLC presented renderings of the facades of both buildings. The development plans to create a “pedestrian-friendly and utilized environment,” in the “underutilized” gap between downtown and Wooster Square, he said.

87 Union developer Noel Petra asked the city for a zoning change from a warehouse-oriented district to a central business/residential, or BD-1, zone to allow for denser, mixed-use development.

This is the final approval Petra needed.

The final plan was modified after meetings with the community. Petra withdrew a request for a 3.5 floor to area ration, rather than the 3.0 he ended up with.

“We met with the community. They said, ‘We’d like it to be less dense’” and have more parking,” Petra said. “We modified our plans. We ended up with a slightly less-dense” project.

The project will replace warehouses and a plumbing supply store with a mix of studios, apartments, townhouses, and retail. Petra said Friday he expects to include 285 to 300 apartments in the final development and have storefronts line the entire length of the Olive Street portion, as well as along Union Street. The original plan called for 325 apartments.
Click to expand...

Developer Douglas Cohen spoke to the neighborhoods’ community management team at City Hall Wednesday night to provide updates on the planning process and solicit feedback on how to proceed with the proposed six-story 115-room extended-stay inn he hopes to build on Elm and Howe streets. Two weeks earlier, he had made a similar stop at the Dwight Management Team, the first since formally withdrawing plans in the face of neighborhood opposition.
Click to expand...

New Haven​
Ground Broken For State Street Lofts
A groundbreaking in East Rock’s Goatville section Tuesday was a celebration of not just new lofts, but of what can happen when a community and a developer actually agree on a project.

City officials and developers tossed a little dirt from a makeshift pile just across the street from what will eventually become the “State Street Lofts”—4,000 square feet of ground floor retail space with three residential units on the second floor. Just behind that will be another 232 market-rate apartments. The development is expected to have 273 parking spots—more than zoning requires—and 235 bike-parking spots.

For more than five years, plans for the abandoned for Star Supply Property, a complex of five brick structures at the corner of State, Lawrence and Mechanic streets, had come and gone. Neighbors and developers were at odds.
But almost a year ago, after meetings with community members, developers were able to come up with a plan that satisfied most of neighbors’ concerns about parking and gentrification.
Click to expand...

Contributing to the ongoing renaissance of Downtown New Haven, Metro Star Properties is proud to introduce Metro 280! This exciting project is the restoration and adaptive re-use of the Crown Street Garage, located on the corner of Crown and High Street, just steps to Yale University. The neighborhood is truly unique to the City – a fabulous destination for fine restaurants, shops and all the cultural amenities New Haven has to offer.
Click to expand...

News about the Hartford Line

Interesting. Glad to see the new commuter rail stations and service. Not so thrilled about widening I-95. Didn't they just do that? And is there even room to widen it further? And won't that just make traffic worse over the long term?
N

cden4 said:
Interesting. Glad to see the new commuter rail stations and service. Not so thrilled about widening I-95. Didn't they just do that? And is there even room to widen it further? And won't that just make traffic worse over the long term?
Click to expand...

Part of the Highway widen , most of the congestion could be reduced if the Branches and SLE received their promised upgrades. Taking the train is slower then driving if you live along the Waterbury Branch/ Route 8 Corridor or Danbury Branch / Route 7 Corridor. That's also factoring in Traffic along those 2 corridors , the Rail Branches are so slow that why bother. And Service isn't to good , but they've found that people are willing to take the train as along as there are enough trains and not large gaps between them. The Recent redevelopments in Norwalk are a huge concern as they huge congestion generators and little has been done to encourage transit...
C

Yeah personally I definitely prefer a predictable train ride vs driving for a commute, even if it takes longer, because it's a lot more comfortable and I can read a book rather than staring at the bumper in front of me. I think a lot of people feel similarly. Driving in heavy traffic can be very stressful.
S

Now that there is a New Haven thread...
Might as well add Alexion's new HQ due to be completed later this year. 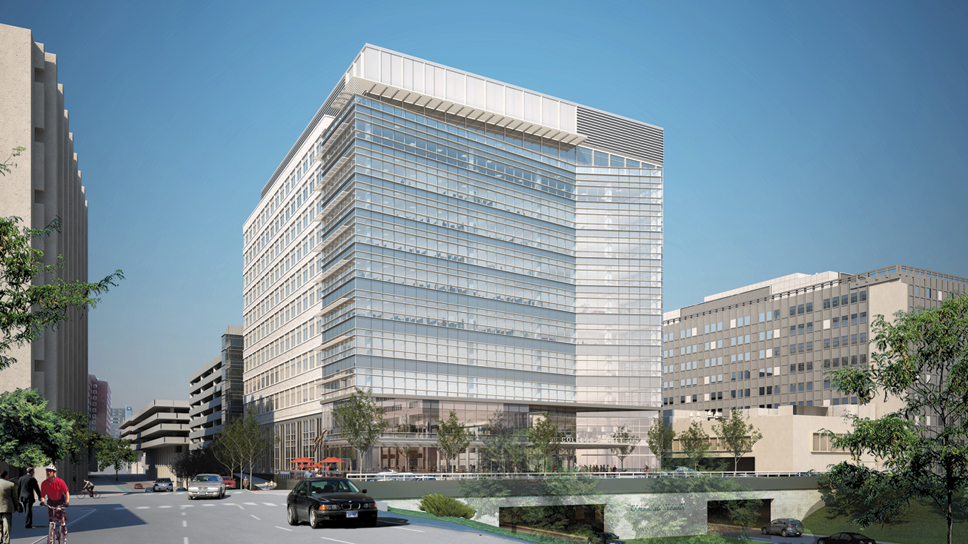 The new building will combine research, operational and administrative functions within a single, state-of-the-art facility to support the company’s growth as it expands its global mission to transform the lives of patients with severe and life-threatening rare disorders.

The 14-story headquarters building is expected to open for occupancy in late 2015, bringing a flagship biotech location to the ongoing renaissance of the Downtown Crossing area in New Haven. When completed, Alexion’s new headquarters will include a wide range of features to support a highly productive and collaborative work environment. In addition, significant attention has been paid to ensure that the building is a good neighbor in New Haven, including:
• Environmentally sustainable and energy-friendly design throughout the building, and abundant natural lighting for all office spaces
• Car charging stations for employees and visitors who drive electric vehicles
• A state-of-the art training and development center, and a spacious auditorium with tiered-seating for company and community events

“New Haven is the perfect environment for Alexion as we continue to develop life-transforming therapies for more patients and their families around the world,” said Dan Caron, Vice President, Site Operations & Engineering. “As the company returns to the city where it originated 22 years ago, New Haven will offer us a vibrant business and academic environment for our employees who will work there every day, as well as for those colleagues and other visitors from around the world.”

This one has kept me fairly busy.
B

Haha, I'm a lot more positive about New Haven than in 2012, cute little city with a lot of character and history. Also quite gritty and affordable but rarely scary. Yale and the surrounding area provide a nice contrast that most gritty New England cities don't have. The density is a little low but most of the city is intact early 20th-century neighborhoods and there aren't too many noticeable gaps. But it is still true that the area is overwhelmingly car-dependent, similar to other small cities throughout New England. Pretty happy to see some revitalization, many historic buildings are getting rehabbed and there's a surprisingly high amount of construction.
B

If you want to see some real New England urban decay, grittiness, and character, check out Waterbury. Quite a distressed post-industrial small city with tons of historic buildings and very hilly topography.
B

BarbaricManchurian said:
If you want to see some real New England urban decay, grittiness, and character, check out Waterbury. Quite a distressed post-industrial small city with tons of historic buildings and very hilly topography.
Click to expand... The City of New Haven initiated the Hill-to-Downtown Community Plan to unlock the potential of this transit served location as a walkable, mixed-use medical, research, residential, and retail district between downtown New Haven and the Hill neighborhood. Located directly adjacent to historic Union Station, the area has languished since urban-renewal-era planning resulted in widespread land clearance and left a disjointed and dysfunctional street network.

Developed through a robust public process that engaged all community and institutional stakeholders, the Community Plan includes the following initiatives:

Reconnects Downtown, the Hill, and the Medical District (Yale New Haven Hospital, Yale School of Medicine, and related research enterprises) with each other
Promotes redevelopment of the 300-unit Church Street South section 8 residential complex as a 750-unit mixed-income, mixed-use community
Links Union Station to the district and downtown through creation of a Union Square, a gateway public space and destination
Revises zoning that incorporate height transitions between higher density research and residential areas and the modest scale of surrounding neighborhoods