Stlin said:
I mean... Amtrak and the State DOTs have lots of these station visioning things in the planning stages. According to the NEC projects page, DC union, Providence, Newark Penn, Philly 30th, and Boston SSX all have some sort of transformation planned or in design... But I never hear about funding them.
Click to expand...

D.C. Union's getting a shitton of enhancements already in-progress. That one got going long ago, and what they're doing is mega. Philly 30th is pretty far along in planning, too.


Keep in mind, it is sort of a different world south-of-NYC vs. north-of-NYC. Obviously for us SSX has gone full-shitshow with the political factioning, project creep, and rampant misinformation on what it intends to accomplish. But for Amtrak's purposes the great service increaser to BOS/PRV is all contingent on Gateway getting built into NYC first...and that is the political shitshow of all shitshows. So on simple priorities Amtrak can't put the same attention on us as long as the all-critical Gateway linchpin is still mired in infighting muck and oh-so-typical NY cost estimate explosions. SSX's fate is going to turn on the T's Rail Vision well before it does Amtrak given the (charitably) razor-thin or (less-charitably) woefully over-optimistic margins math that's projected for RUR at the current terminal.

Different story down south. You've got the Portal Bridge shovel-in-ground in Jersey...that's going to clean up traffic through Secaucus (future loop or no future loop) and Newark Penn enough that NJT has to pounce. Philly and Baltimore have immediate taps on the last 10 + next 10 years worth of bookending track work, and D.C. cranks up a whole other level with the second Potomac crossing now shovel-ready and the doubling-plus of all manner of service from Virginia.


Gateway's going to be a scandal of overruns, corruption, and delays no matter whether a more amenable Congress + Admin wad up for it and end this game of chicken over whether it'll be funded at all. But practically speaking the NEC through New England is all subservient to that one getting done before the national attention comes up here. Given the stakes at hand, that is the correct sequence.
F

Metro North just RFI'd for its push-pull coach procurement that wholesale-replaces all 160+ East-of-Hudson MTA & ConnDOT single-levels with new bi-levels. Long expected, since Hudson/Harlem diesel territory in particular is so tapped out of capacity that they can't add cars; Grand Central is crowded enough that the diesel run-thrus are pinned into the short platforms on the lower level. So pivot is maxing out per-car seating capacity rather than adding cars. Expected that this order will be 2 x 2 seating bi's (i.e. like NJ Transit's MLV's and not like the T's 3 x 2 seat Kawasakis/Rotems) as they can ill afford to rack up additional dwell penalties. Originally was planned to be a combo order with LIRR for replacement of their mid-90's era Kawasaki C3 bi-levels, but getting LIRR + MTA-side MNRR + ConnDOT-side MNRR all on the same page with requested unit quantities may be too much of a reach so they're split for now. MNRR's push-pull requirements don't differ at all from LIRR except that they need door traps (standard anyway) for the non-ADA platforms on the podunk Waterbury Branch, so TBD if the orders get reunited by RFP time or stay separate with LIRR ordering same thing on its own separate procurement schedule.


This development has a large bearing on what the T ends up doing for its 200-car bi-level procurement that's also out on RFI, since the MNRR and MBTA orders time similarly and are now collectively worth 2x the number of units. We'll find out a lot about which upstarts are hungriest for making a splash, whether Kawasaki (embedded deep with both agencies) is feeling like making a new stand after statements the last couple years that they were retreating from the domestic commuter rail market, and whether Bombardier (now being handed off to Alstom after the merger was approved) is going to blow away the field with a MLV package that cements them a North American commuter coach market stranglehold. At any rate, unit price point just got potentially a whole lot more attractive for everyone with twice the units now up-for-grabs in these dueling procurements.

We'll also probably see what tricks CRRC has up its sleeve to try to market its push-pull bi-level (currently under-construction for SEPTA and Exo in Montreal) against the U.S. gov't funding ban on Chinese rolling stock manufacturers. It's extremely, extremely unlikely that either T or MNRR will look closely at what the Springfield factory has to offer because of likelihood that of post-COVID transit rehab federal funding being extensible to these rolling stock orders. Possibilities there are wide-open enough that it would be very ill-advised for NY/CT & MA to bid out solely state-funded procurements inclusive of CRRC, so they'll likely have to be barred from the RFP's to maximize the potential funding sources. But we'll probably now hear CRRC's absolute most persuasive possible sales pitch...if for no other reason than keeping them in the conversation for future orders when the fed's Chinese sanctions may be dropped.
Last edited: Oct 17, 2020
F

Fehmarnbelt Tunnel will be the world's longest immersed tunnel

Construction of Fehmarnbelt Tunnel is underway. The world's longest immersed tunnel is set to link Denmark and Germany across the sea.

Which, on a 200-year planning horizon is sometimes the answer. Kind of like Moar Dike was the Netherlands' centuries-horizon solution. Maybe they'd be relocating to the Virgin Islands if they hadn't been forced to sell to the US.
F

Arlington said:
Which, on a 200-year planning horizon is sometimes the answer. Kind of like Moar Dike was the Netherlands' centuries-horizon solution. Maybe they'd be relocating to the Virgin Islands if they hadn't been forced to sell to the US.
Click to expand...

I'll have MOAR TUNNEL that in something less than 200 years, please.
S

I'll have MOAR TUNNEL that in something less than 200 years, please.
Click to expand...

This probably properly belongs in the god mode thread, but what would your preferred routing / portal locations be? I'd almost go Sunken Meadow Pkwy to Bridgeport, rather than anywhere near New Haven.

I'm thinking we need a "Long Now" / "100 Year Plan" thread. Hoover Dam, Penn Station, Transcon RRs, Panama Canal, were all "100 years ago" things that changed/improved lives for what probably amounts to billions of people-years by now. These aren't quite God questions, but they do require people capable of thinking in 100-year paybacks. (or at least 40 year paybacks).

Crossing LI sound would probably do very well as a bond issue, frankly. I like Kings Park to Devon (the dark red) because I think it does the best job of "pointing" between the long-term demand nodes (NYC & NH) and crossing at the centers of the demand density. 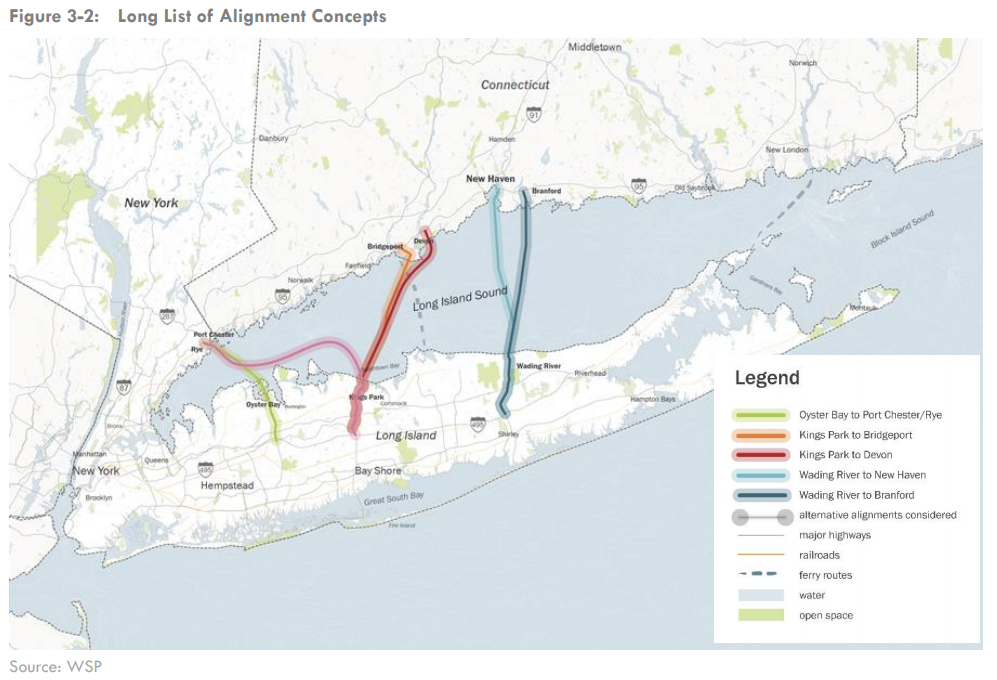 Arlington said:
I'm thinking we need a "Long Now" / "100 Year Plan" thread. Hoover Dam, Penn Station, Transcon RRs, Panama Canal, were all "100 years ago" things that changed/improved lives for what probably amounts to billions of people-years by now. These aren't quite God questions, but they do require people capable of thinking in 100-year paybacks. (or at least 40 year paybacks).

Crossing LI sound would probably do very well as a bond issue, frankly. I like Kings Park to Devon (the dark red) because I think it does the best job of "pointing" between the long-term demand nodes (NYC & NH) and crossing at the centers of the demand density.

Wading River to East Haven is the "best" if you're talking pure manifest destiny. That's I-91 extended on William Floyd Parkway through I-495 to NY 27, and Belle Dock Industrial Track to Port Jefferson Branch (+ re-extension on 'proto'-landbanked LIRR DC feeder power line ROW to Wading River). With the north-south LIRR-owned power ROW (originally intended for an unbuilt track connection) out of Wading River connecting south to the LIRR Main Line west of Manorville for alt-routed expresses. Highest-capacity on every mode, best overall load distribution of any potential crossing.

But that's purely manifest destiny "go big or go home", as clearly it's the longest by tunnel length (though not necessarily the hardest soil in the Sound to plow through). I don't actually expect that to carry any advocacy mojo for as long as any of us or our children are still alive.


I don't even think 200 years from now NIMBY's will be extinct enough to get Oyster Bay-Rye going, and it's a tough nut for distributing loads on each side. Wishful thinking that it'll ever be viable. At least Watch Hill has faded out as an option...least-useful for transportation, most impacted by sea level rise, and bedrock vs. elevation changes for the number of tunnel portals required for all the island-hopping wasn't as real-world conducive to cost control as the short-by-tunnel-feet 2D map once depicted.
F