^*shudders* - you're not alone now that I've scrolled through the pictures, but I can't imagine anything good.

I'm pretty sure I saw that one on Zillow Gone Wild on Instagram. Lots of interesting entries to browse (including some relatively local ones).
E 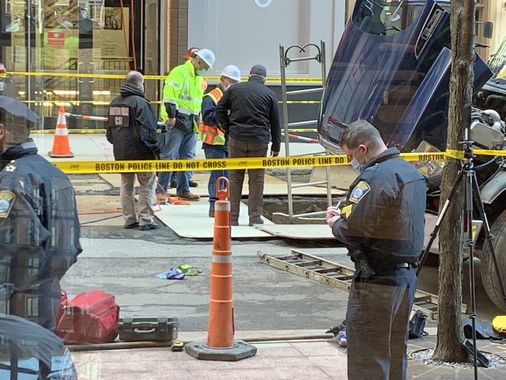 Two people were killed Wednesday in an accident at a downtown Boston construction site. Law enforcement and the Occupational Safety and Health Administration are investigating.

Very sad Was this at Winthrop?
K

Two people were killed Wednesday in an accident at a downtown Boston construction site. Law enforcement and the Occupational Safety and Health Administration are investigating.

Very sad Was this at Winthrop?
Click to expand...

High Street near International Place/Greenway. I assume utility work of some kind.

I enjoy these videos of drives around major cities/regions. This is the latest one of Boston.

The nature of the Charles River crossing had been a source of major controversy throughout the design phase of the project. Many environmental advocates preferred a river crossing entirely in tunnels, but this, along with 27 other plans, was rejected as too costly. Finally, with a deadline looming to begin construction on a separate project that would connect the Tobin Bridge to the Charles River crossing, Salvucci overrode the objections and chose a variant of the plan known as "Scheme Z". This plan was considered to be reasonably cost-effective, but had the drawback of requiring highway ramps stacked up as high as 100 feet (30 m) immediately adjacent to the Charles River.[32]
Click to expand...

Well, I for one, am glad they managed to keep the costs for the Big Dig under control!

When proposed, the Zakim was referred to as the "Son of Scheme Z" in the local media. However an all tunnel plan never got as much consideration as the article seems to imply.
C