Hopefully winthrop center builds an extra floor and is forced to turn it into a public observation deck too haha.

It was supposed to have one until they weaseled out of it with the great hall.
D

stick n move said:
Hopefully winthrop center builds an extra floor and is forced to turn it into a public observation deck too haha.

It was supposed to have one until they weaseled out of it with the great hall.
Click to expand...

Winthrop Center comes within 6' of the FAA limits so you're not going to get an extra floor with those 6', and if you did it would have to be removed.
C

stick n move said:
Hopefully winthrop center builds an extra floor and is forced to turn it into a public observation deck too haha.

It was supposed to have one until they weaseled out of it with the great hall.
Click to expand...

that bait-and-switch was one of the more offensive things about the evolution of the winthrop project. between millenium pulling that nonsense and the powers that be over at JHT refusing to honor the observation deck pre-requisite b/c the city can't find the original documents (unreal...), we're really missing out on stuff we could and should have (and in JHT's case, even worse, USED TO have).

maybe the Pru's new "ViewBoston" will be such a runaway success that those other chuckleheads will decide there's money to be made by such ventures and clear aside some space in their own towers for the observation decks they initially promised the city.
S


DZH22 said:
Winthrop Center comes within 6' of the FAA limits so you're not going to get an extra floor with those 6', and if you did it would have to be removed.
Click to expand...

Oh I know I wasnt being serious at all.
C

Custom House tower’s deck is the best and likely always will be.

With so many technological breakthroughs pouring out of Cambridge, I'm sure practically every other building is connected to some piece of interesting history. However, I think this one warrants being called an easter egg because seemingly no one knows about it.

The West Coast is usually thought of as the birthplace of the internet since the first ARPANET nodes to go online were at Stanford Research Institute and UCLA. However, the machines they were using, the first networked devices ever built, were designed and constructed by Bolt Beranek and Newman, at the time a large computer research firm and Cambridge's "third university". I don't think any place on earth has a greater claim to being the birthplace of the internet than this extremely nondescript building in Fresh Pond!

I only learned this from reading Where Wizards Stay Up Late (full pdf if you're interested), a great history of the era. A large percentage of it takes place in Fresh Pond. It was a shocking discovery for me because I've literally never heard this factoid mentioned anywhere else.

(While writing this post, I also discovered that the whole campus was purchased back in September. Perhaps not here for much longer!)
B

theSil said:
I don't think any place on earth has a greater claim to being the birthplace of the internet than this extremely nondescript building in Fresh Pond!
Click to expand...

Well, not exactly that building, or at least, not just that building, which I think was put up in 1980. The ARPANET work was begun in the early- to mid-70s (arguably earlier in some forms), and at the time, BBN occupied buildings further up Moulton St. Also took over some buildings (a former can company) along Fawcett St, since demolished and replaced with apartments, I believe. BBN was an acoustics consultancy formed by a couple MIT professors and one of their grad students in 1947; their work led them into computers (they had one of the first computers from DEC and helped write operating system software for some of their larger machines) and networking (early ARPANET software and hardware, later having the contracts to manage large swathes of it and what became the early NSFnet, migrating into what we know as the Internet).

But what you say is essentially true; anyone who wants to go down that particular rabbit hole (and it is fascinating for those with an interest in local technology history) might want to have a look at Dave Walden's BBN History page, which includes a link to the book he's assembled on the topic. It was a fascinating place to work. I was there only briefly, 1990-1992, but it was the best job I ever had from a technical point of view, seeming to exist somewhere in that liminal space between grad school and actually getting real things done. I got to work with several of the real pioneers of that era, and they were not only extremely capable engineers, but a great deal of fun to know. Being a smallish public company with a somewhat moribund stock (BBN was made up of great engineers, and as businessmen, they were...great engineers) left them susceptible to conglomerates, and sure enough, they got hoovered up by GTE, then Verizon, then Raytheon, which somewhat constrained the work they did, but there's still some very smart people there.
D

1.) Hewitt's Cove on the Weymouth/Hingham line. It's now an upscale marina with fancy condos and high-end retail, but there is a historical marker tucked-away there, near the rampway down to the MBTA ferry, attesting to how the US Navy constructed a staggering number of destroyers--something like 100 in 2 years--at Hewitt's Cove, in the early 1940s.

American destroyers won the Battle of the Atlantic and as a result rescued England. They convoyed the mechanized transports--Jeeps, most crucially--to the Soviets, such that by the time Stalin's armies were ready to launch their massive assault on Eastern Europe, they utterly crushed the German armies with devastating blitzkrieg tactics. To a very significant degree, the war in Europe was won due to the shipbuilding efforts at Hewitt's Cove. And now you can get Wahlburgers there!

2.) This one is rather gruesome, but unquestionably "Easter Egg"-style: the true Gallows Hill in Salem where all of the accused witches were hung during the 1692 witchcraft hysteria. Here's a story describing how a memorial was finally built at the site, only in 2017.

Given the size of Downtown Salem's Witchcraft Tourism Industrial-Economy Complex, it is a rather absurd--shameful?--piece of cognitive dissonance, that presumably so few of the tourists get out to the (very inconspicuous and tucked-away) memorial site to pay respects.

Although come to think of it, that's probably exactly how all of the abutting neighbors prefer it!

Ah, I should've known there would be at least one aBer who had experienced the place firsthand. Apologies for getting the building wrong, I thought I had read descriptions that made it sound like 10 Moulton St.

Thank you for linking to the additional BBN history. It's really surprising to me that there's not greater awareness of this history. In my eyes, it's like having Johannes Gutenberg's workshop sitting there in Fresh Pond, with no one giving a damn. 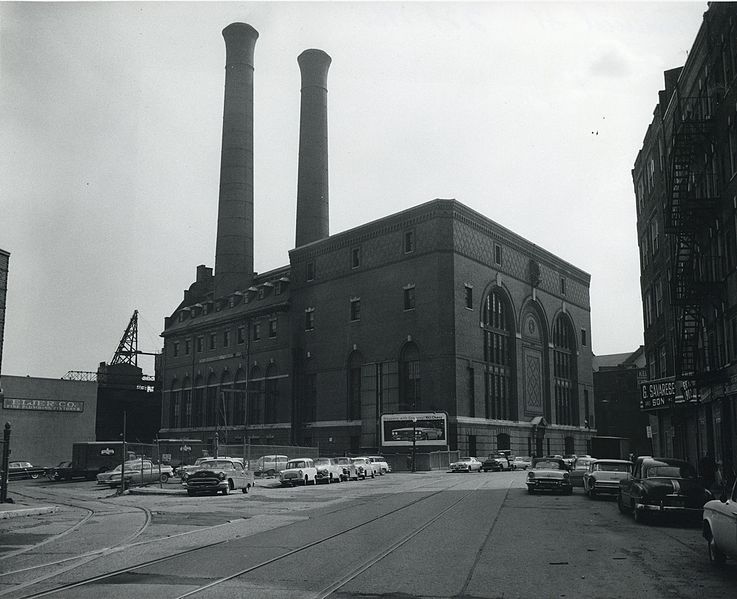 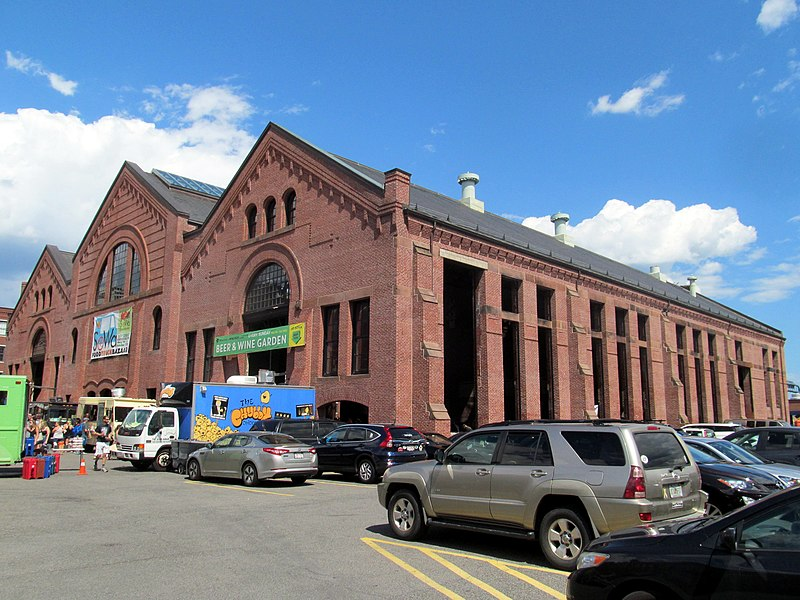 The power station is no longer gutted, they fully updated it. I went to a wedding there in September
A

Slightly outside of Boston, and slightly more obscure, are the street names in this Norwood industrial park. They hint at what used to exist there: Norwood Arena Speedway, a 1/4 mile oval that hosted a NASCAR Grand National (now Cup Series) race in 1951. Morgan Drive refers to the British automaker, both Vanderbilt and Astor refer to early-1900s auto races that were among the first major trophies in the sport. The Vanderbilt Cup received a brief revival in the early-aughts as CART/ChampCar's trophy, and IndyCar revived the Astor Cup a decade ago and still awards it to their champion.

There's an anachronism of sorts in the bear cages frieze, which depicts the Custom House tower, emblematic of Boston. But note the date: 1912. Construction wouldn't begin on the tower for another year, and yet, there it is.

BeyondRevenue said:
Here are three audible Easter eggs:
The top of the escalators at 111 Huntington. Stand in the middle of the floor beneath the concave ceiling and your voice gets magnified back at you.
Then there is the Mapparium down the street at the Christian Science Church where you can whisper on one side and someone can hear you 20 feet away.
Aaaaaand the Beirut Memorial in the North End where if you stand in the middle and face due south the same compressed audio effect happens.
Click to expand...

Another audible easter egg that I don't think has been mentioned: If you stand at the center of Robinson Quad at Northeastern and speak you will get a pretty crazy echo.
C

HenryAlan said:
There's an anachronism of sorts in the bear cages frieze, which depicts the Custom House tower, emblematic of Boston. But note the date: 1912. Construction wouldn't begin on the tower for another year, and yet, there it is.
Click to expand...

kinda shocked i never even noticed the custom house tower in there -- thanks for the heads-up/eagle eye!

chrisbrat said:
kinda shocked i never even noticed the custom house tower in there -- thanks for the heads-up/eagle eye!
Click to expand...

Yeah, it took somebody else pointing it out for me, too. Apparently the artist knew the architect and had some inside info that caused him to include the not yet built tower.
G

Left in the fence of Olmsted's Dorchester Park. It reminds me of how sad my commuter is almost 300 years later - so close, yet takes so long. Some things never change, I guess.
Click to expand...

Don't forget these gems too.

There is the Parting stone, where the road leaving Boston forked. Found here between Roxbury Crossing and Nubian Square and just a block away is the three mile stone.

When doing a little research on my place in Forthill I found that the owner of the estate that used to be on the site was a merchant with his business located in what is now Post Office Square, where I was working pre COVID. So that commute has been done for nearly 200 years now.
You must log in or register to reply here.
Share:
Facebook Twitter Reddit Pinterest Tumblr WhatsApp Email Link