OK time for another cache of photos. The great thing about the internet these days is that more and more libraries, museums, newpapers etc. are digitizing more and more of their archives, so there's almost always new material to pour over each and every time you go searching on your favorite topics. Case in point... 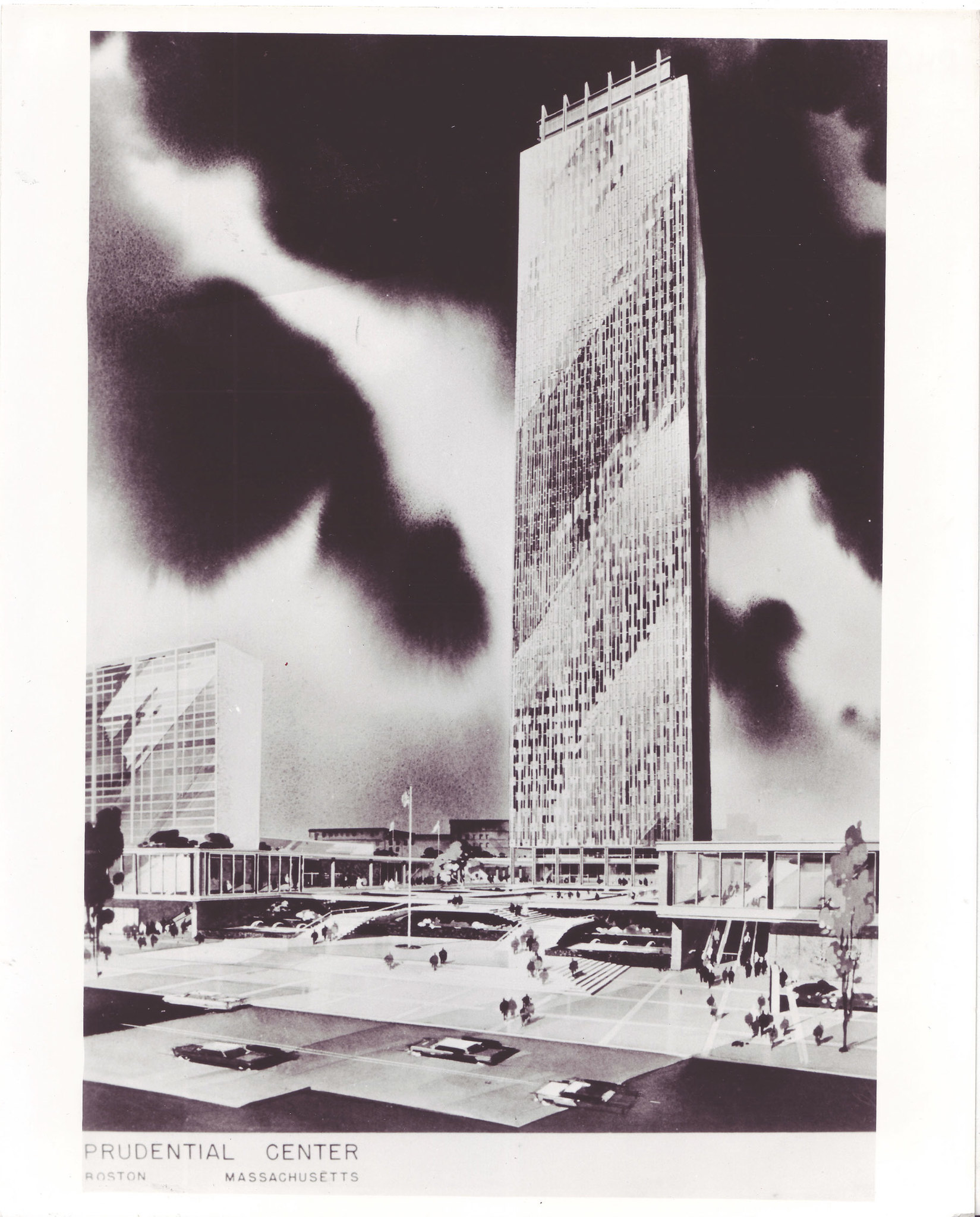 Many of you probably saw this already, but Boston.com ran a great article last year looking back on the 50th anniversary of the complex, with loads of photos from the Boston Globe's archives. All the following shots come from this article except where noted: https://www.boston.com/news/local-news/2015/07/07/breaking-new-ground-when-boston-built-the-prudential-center 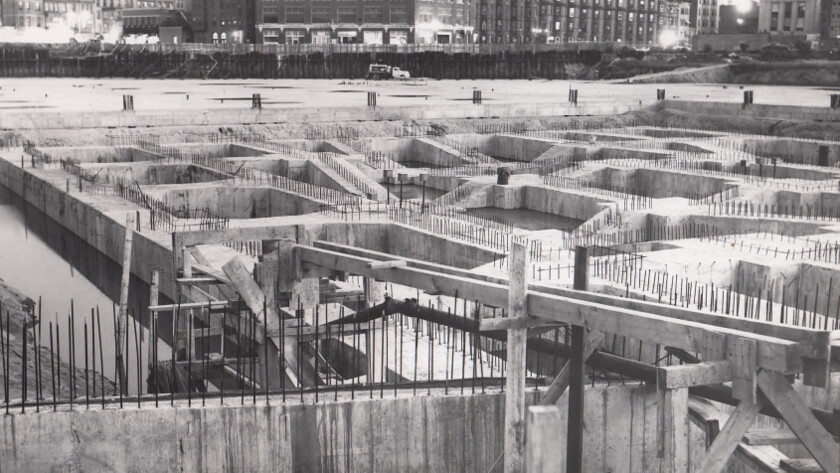 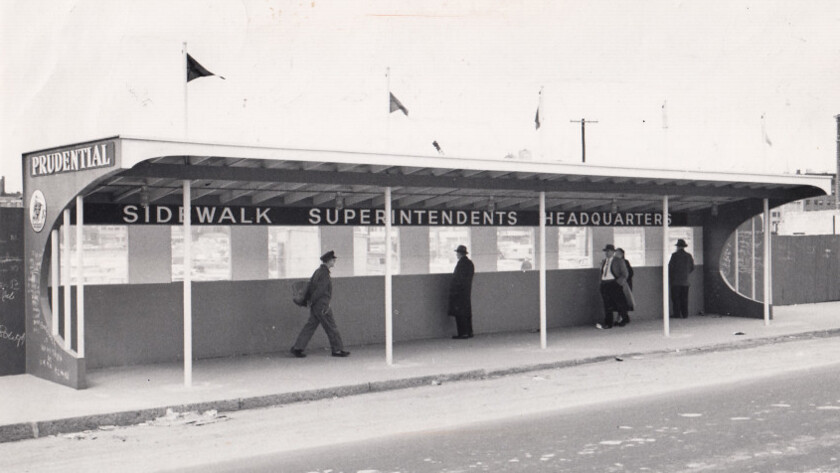 The tower model, which the article notes stood "five-stories" tall: 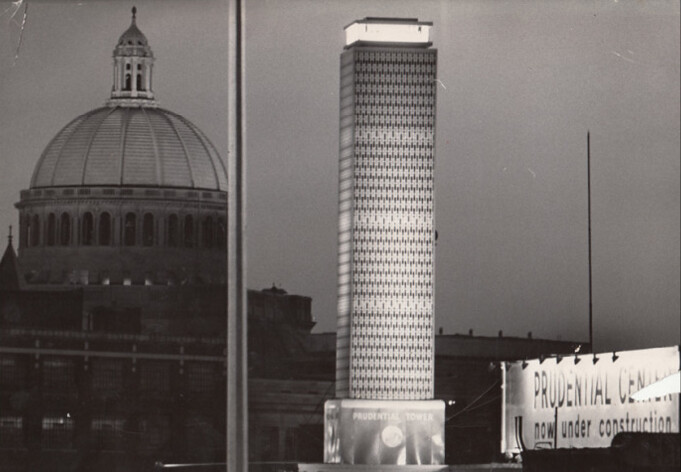 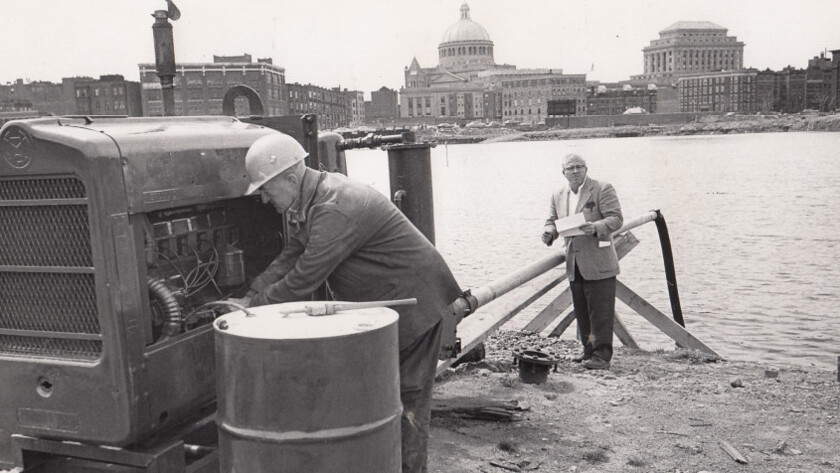 Footings for the retail portion: 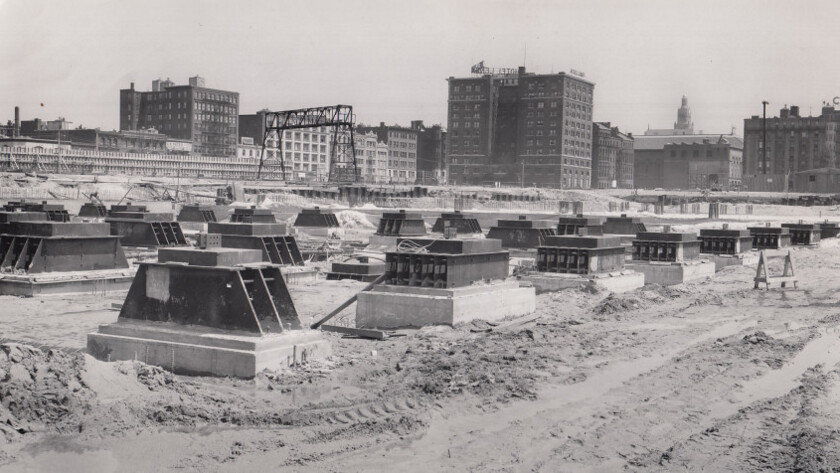 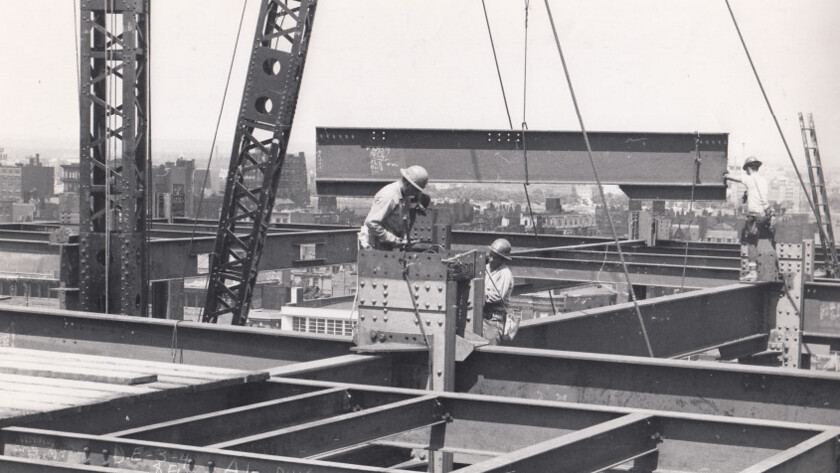 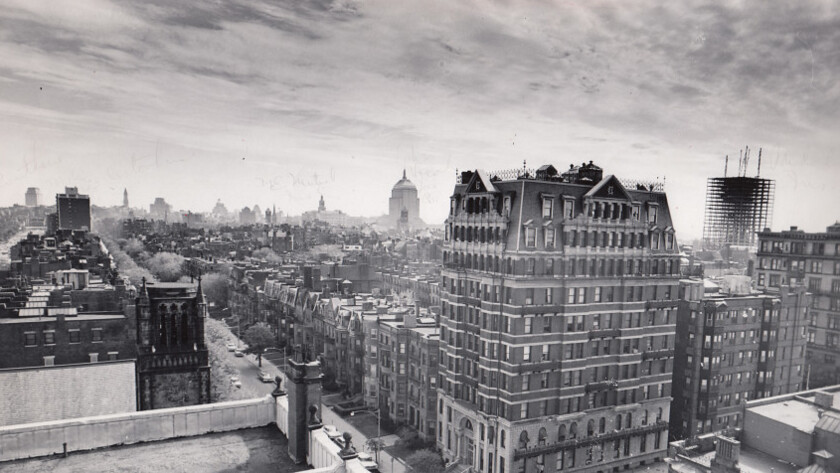 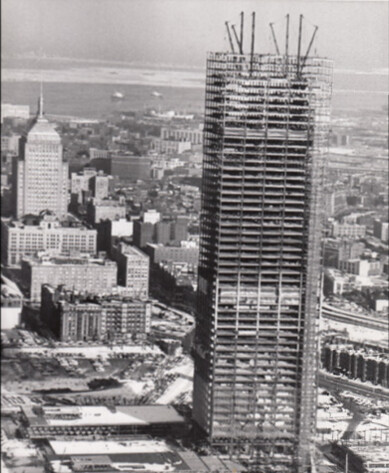 From Scotia Street, before the Hynes garage went up: 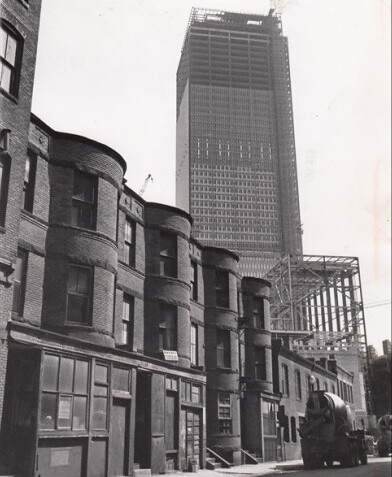 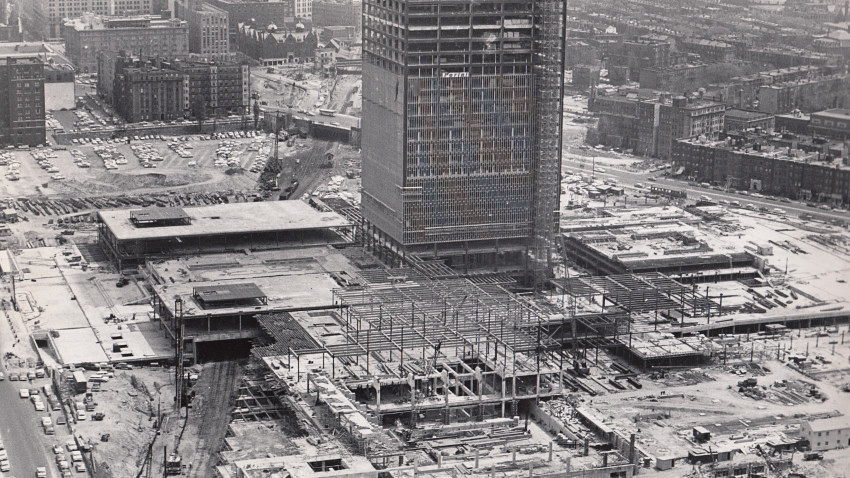 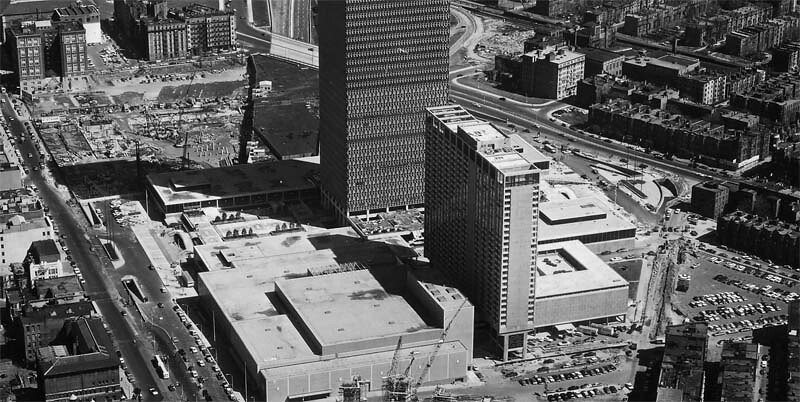 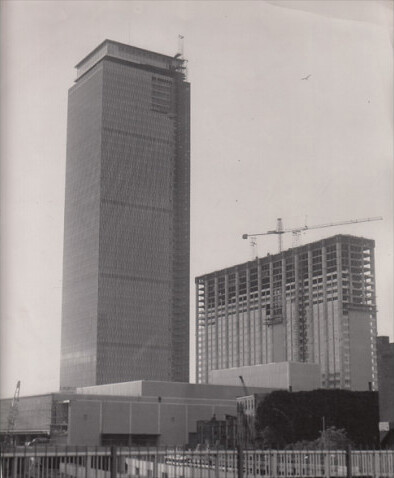 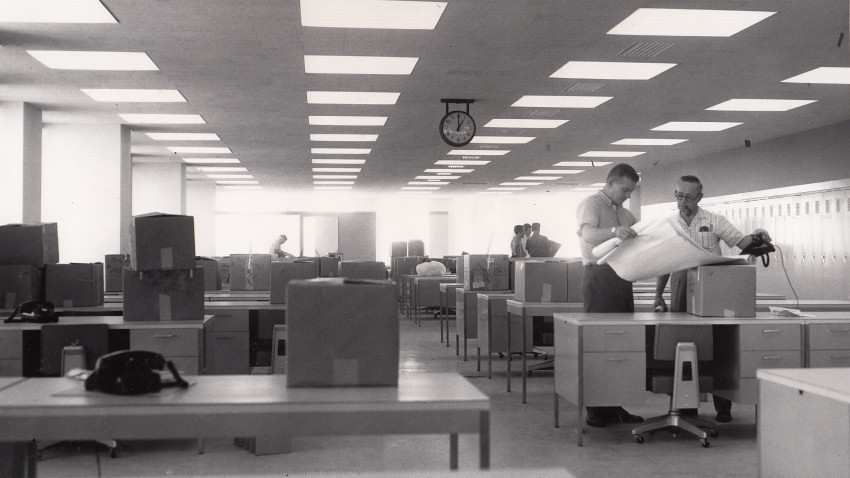 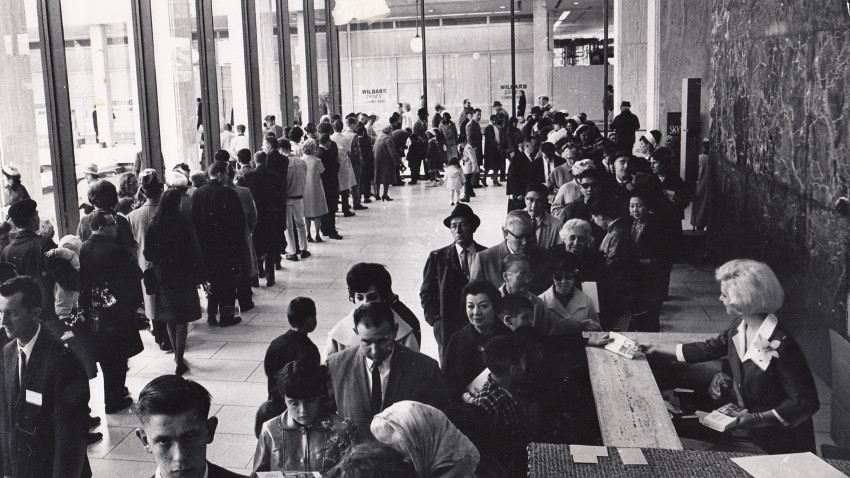 And the employee lounge: 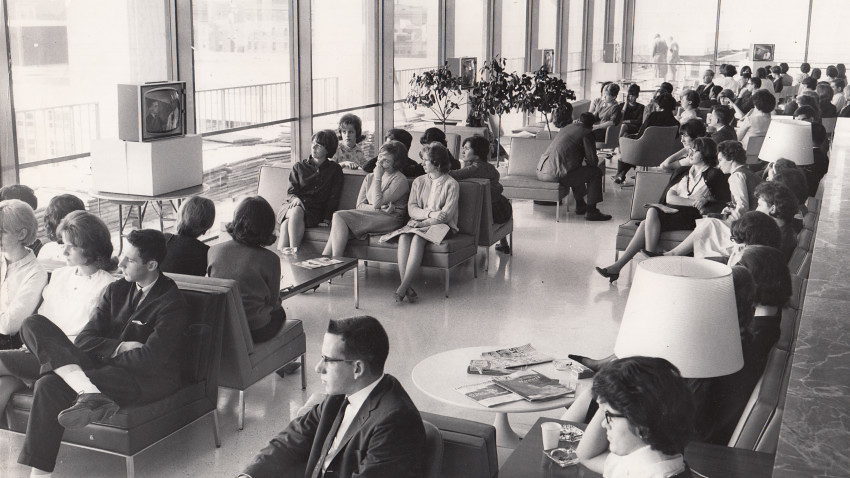 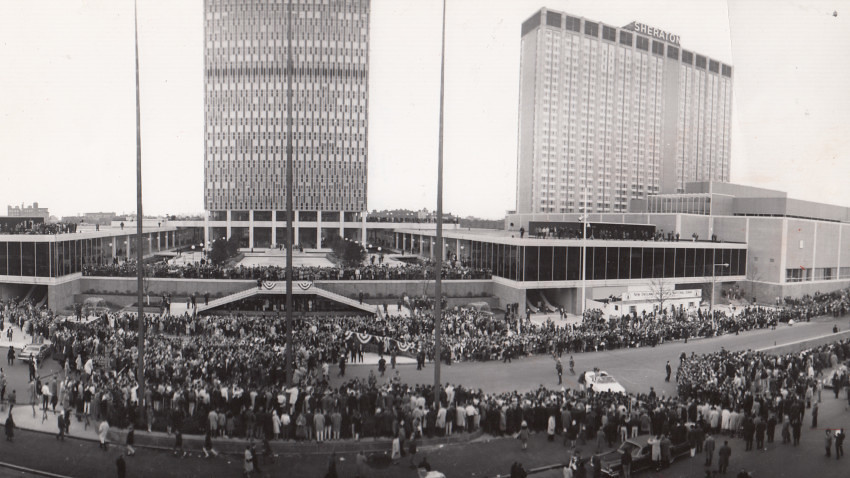 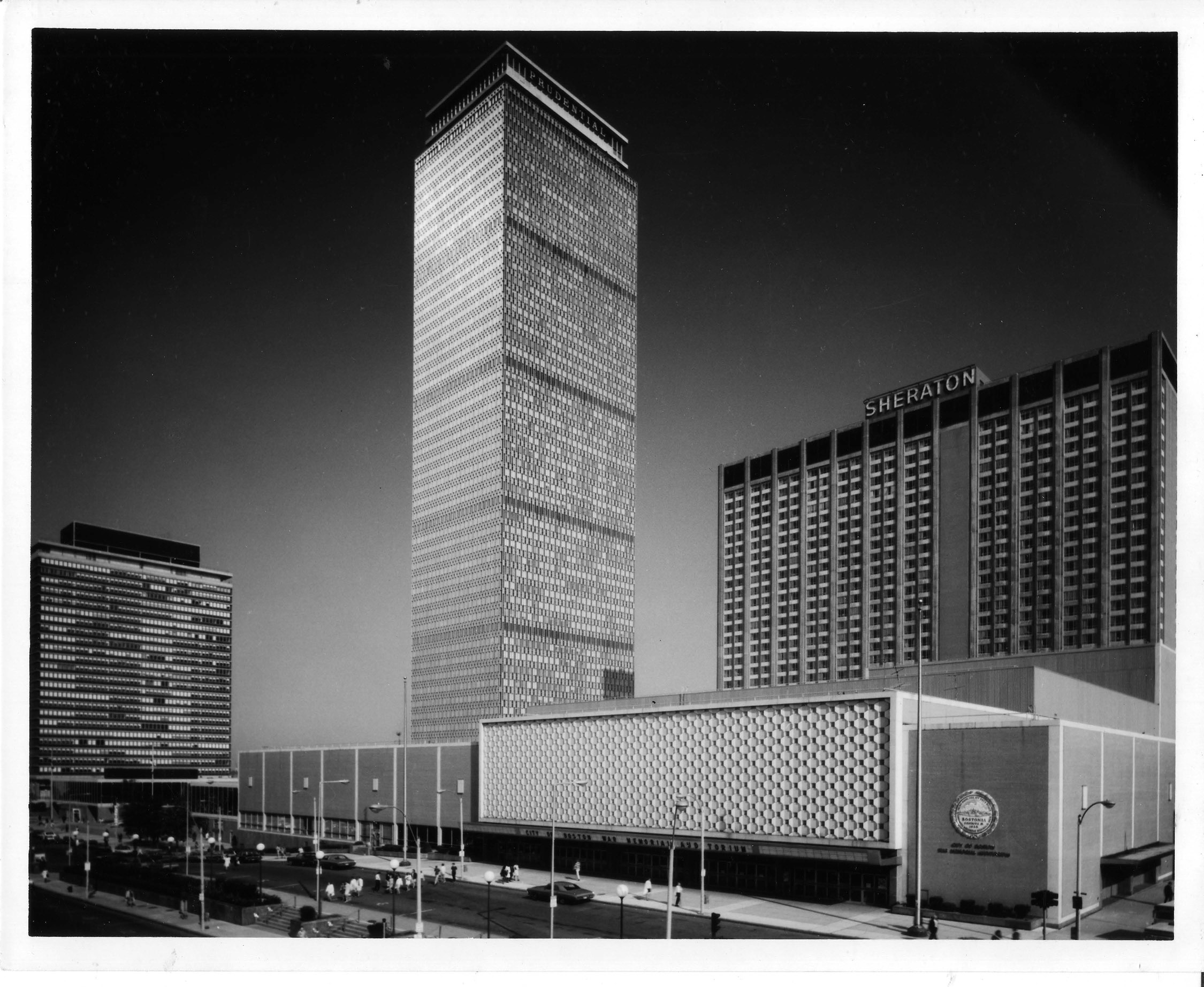 Lastly for now, an aerial from 1969, with 101 Huntington almost at full height: 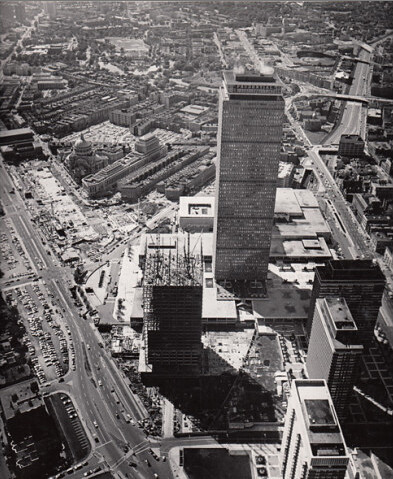 And again, this article is sweet. Loads more photos in it than I shared here: https://www.boston.com/news/local-news/2015/07/07/breaking-new-ground-when-boston-built-the-prudential-center
S

^this is awesome thanks

That October 1962 from Mass Ave rooftop is amazing.

Here's something I've never seen before: shots from the early-'90s renovation of the retail into the Shops at Prudential Center. These are from 1992: 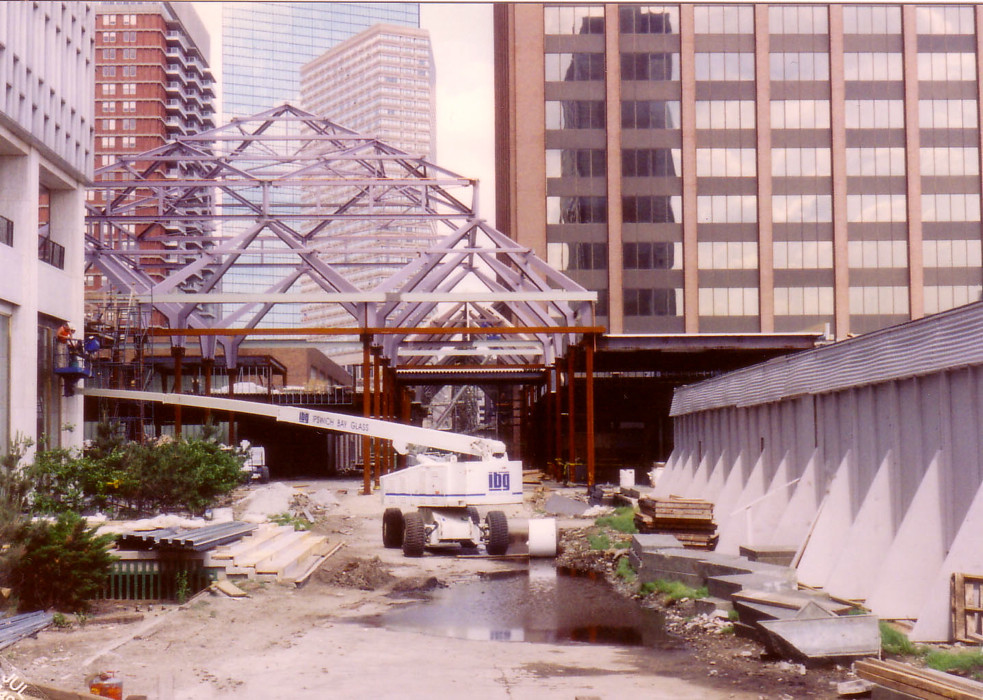 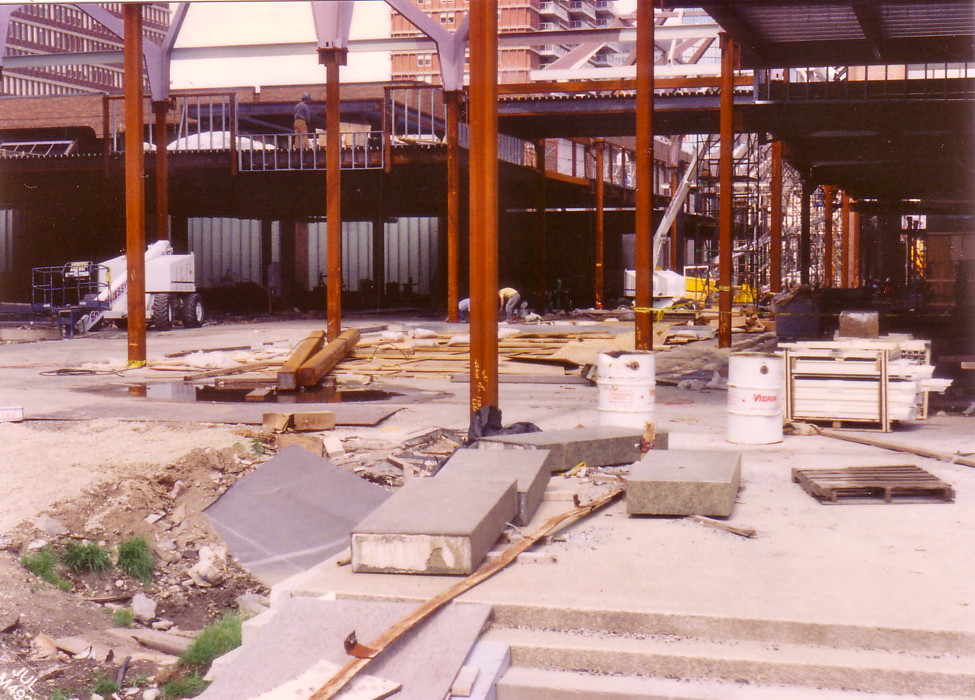 Those came from here: http://www.stfrancischapel.org/en/history

And an article on the opening of the Shops:

For Boston's newest shopping mall, it is show-and-tell time.

"Build it, and they will come," she said emphatically. And a throng of customers is indeed what developers of The Shops at Prudential Center, as the complex is called, are hoping for.

Few malls could ask for a bigger captive audience, they say: as many as 50,000 pedestrians a day, many going to or from the Prudential Tower; tens of thousands of conventioneers a year from the adjacent Hynes Convention Center and a half-dozen luxury hotels nearby; not to mention countless shoppers from Copley Place-which, like the tower, convention center and several hotels is linked to The Shops by an enclosed pedestrian walkway.

Indeed, the new mall is designed to serve as the hub of a bustling downtown shopping complex, linking previously splintered retail and business areas in Boston's glamorous but gap-toothed Back Bay.

But will good connections be good enough to attract droves of shoppers? In today's tough retail climate, build it and they may not come-climate- controlled pedestrian walkways or not.

"Yes, it's a good idea, connecting the hotels and the convention centers," says Robert Gottlieb, a local marketing consultant and former Jordan Marsh executive. "But retailing is suffering here. What the city doesn't need is more stores."

Still, the $100 million Prudential development is certainly beginning to look the fashionable shopping mall. On Boylston Street, its 45-foot-high facade of glass and mostly pink granite juts from Prudential Center Plaza like a ship's bow.

Its 66 stores range from Saks, which has been at the site since 1971, to new branches of Ann Taylor and Elizabeth, a large-size spinoff of Liz Claiborne.

Other new shops will include a Warner Bros. Studio Store, selling movie-related items, with a 60-foot replica of a Boston Tea Party ship above its front door; and Franklin Quest, which decided to open its small store in part because of the volume of catalog orders for its day-planning books from the affluent Back Bay.

There will be a U.S. Post Office and a chapel, too-just in time for the Christmas shopping season.

Before 1991, just 15 stores had coexisted with Saks in a semi-enclosed arcade skirting the Prudential Center and Prudential Tower, Boston's second- tallest skyscraper. The current project is touted as the first phase of a broader redevelopment of the Prudential Center-although later phases have been shelved ever since the local retail economy crashed in the late 1980s.

But Prudential's ambitions are for more than merely opening another big shopping mall.

The development is supposed to be a suture that heals the Prudential Center. The original project's separation from adjacent Boylston Street and Huntington Avenue by escalators and unrelieved concrete plazas decades ago made what was then the Back Bay's economic savior into one of the city's worst design demons.

The complex will also stitch together a disjointed quarter-mile of Back Bay cityscape that includes Saks, as well as the Hynes, Copley Place, Back Bay Station and luxury hotels that didn't exist when the Prudential was built. Department store Lord & Taylor is to be connected later.

The concept has succeeded before: for example, Minneapolis' Skyway System. "It forms a critical mass for us, the way it runs from the Hynes Convention Center straight through Copley Square," says Saks' Fahey.

Indeed, retailers are so enthusiastic about Prudential's retail connect-the-dots project that Hahn Co., the project's leasing agent, claims it has leased 95 percent of the 212,000 square feet of new retail space.

Saks, New England's busiest Star Market, and several stores in the previously somewhat dowdy mall have themselves renovated and expanded, too.

Says Robert Walsh, a vice president of Prudential Realty Group: "The synergy we're going to be able to create with these places is just terrific."

Maybe. But just now, another kind of energy is being generated-namely, the jitters.

The competition in today's lean retail market is keen, as the rest of downtown Boston finds itself just coming to after the recession's knockdown punch.

In its conception of The Shops at Prudential Center, Prudential Realty did scale down the mall, in response to the weak economy and community resistance. Its total new retail space is less than a third of the additional 626,000 square feet Prudential Realty Group proposed in its original, 1986 redevelopment plan.

A 15-minute walk from Prudential Center sits vacant, blighted Lafayette Place, which still hasn't found its developer-savior. When and if it does, it is widely expected that Lafayette Place will try to become a competing mall.

Jordan Marsh is renovating the ground floor of its troubled Downtown Crossing store. And on Boylston Street Marshall's, a clothing store chain with a decidedly '90s, off-price appeal, will soon open in the former Bonwit Teller department store.
Click to expand...

Not the most exciting find but it dovetails nicely with the above post: I came across this alarm panel that shows the Pru as it existed for only a short time, circa 1993-1998, when the Shops had been built but before 111 Huntington went up. 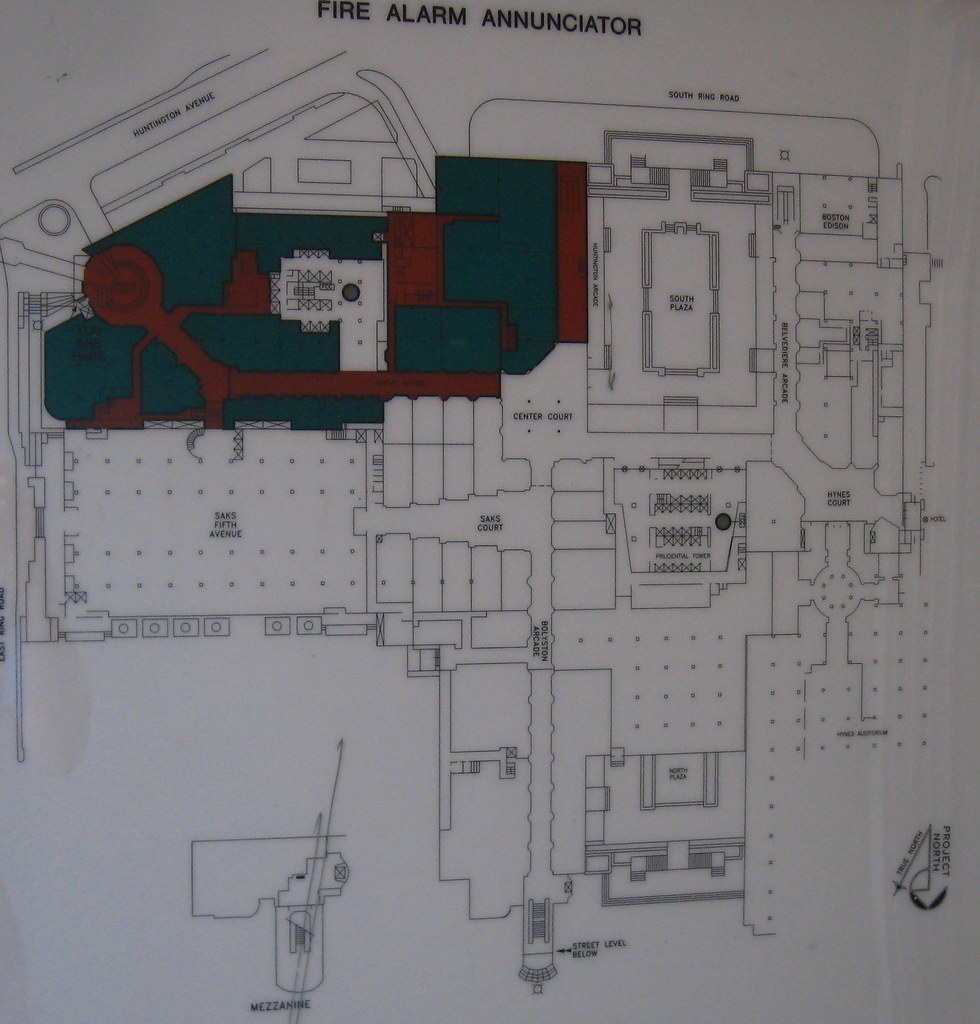 I would love to see the Pru get a makeover.Maybe add 15-20 floors and re-skin in black with a more modern T-top.Anyone know of any skyscrapers given a makeover as such?
S alicat said:
I would love to see the Pru get a makeover.Maybe add 15-20 floors and re-skin in black with a more modern T-top.Anyone know of any skyscrapers given a makeover as such?
Click to expand...

I doubt it would be financially feasible to add 15 to 20 floors on top of a 50 year old structure. I can't think of any skyscraper that has added floors to the top of it without a total makeover. Honestly I don't think there is anything wrong with the outside of the Pru as is, sure it could be updated slightly but it does not need to be rebuilt. It is a good example of 1960s modernism which may be looked at more favorably in the future.

On the other hand I wonder if the upper floors of somewhere like the Pru could be converted to condos or is the office market still too strong? It doesn't seem like there any tall buildings being built 100% for offices anymore in the Boston area. Does anyone know if the Pru is mostly occupied or is there a lot of vacancy?

tysmith95 said:
Does anyone know if the Pru is mostly occupied or is there a lot of vacancy?
Click to expand...

Practically every building in the city is close to fully occupied.

A metal print of this shot hangs in my parlor/library.
S

I realize its too late, and superblocks were coming into fashion when this was built, but it would have been nice if they had connected the street grid much better than they did.

Just posted to Dirty Old Boston via the City Archives 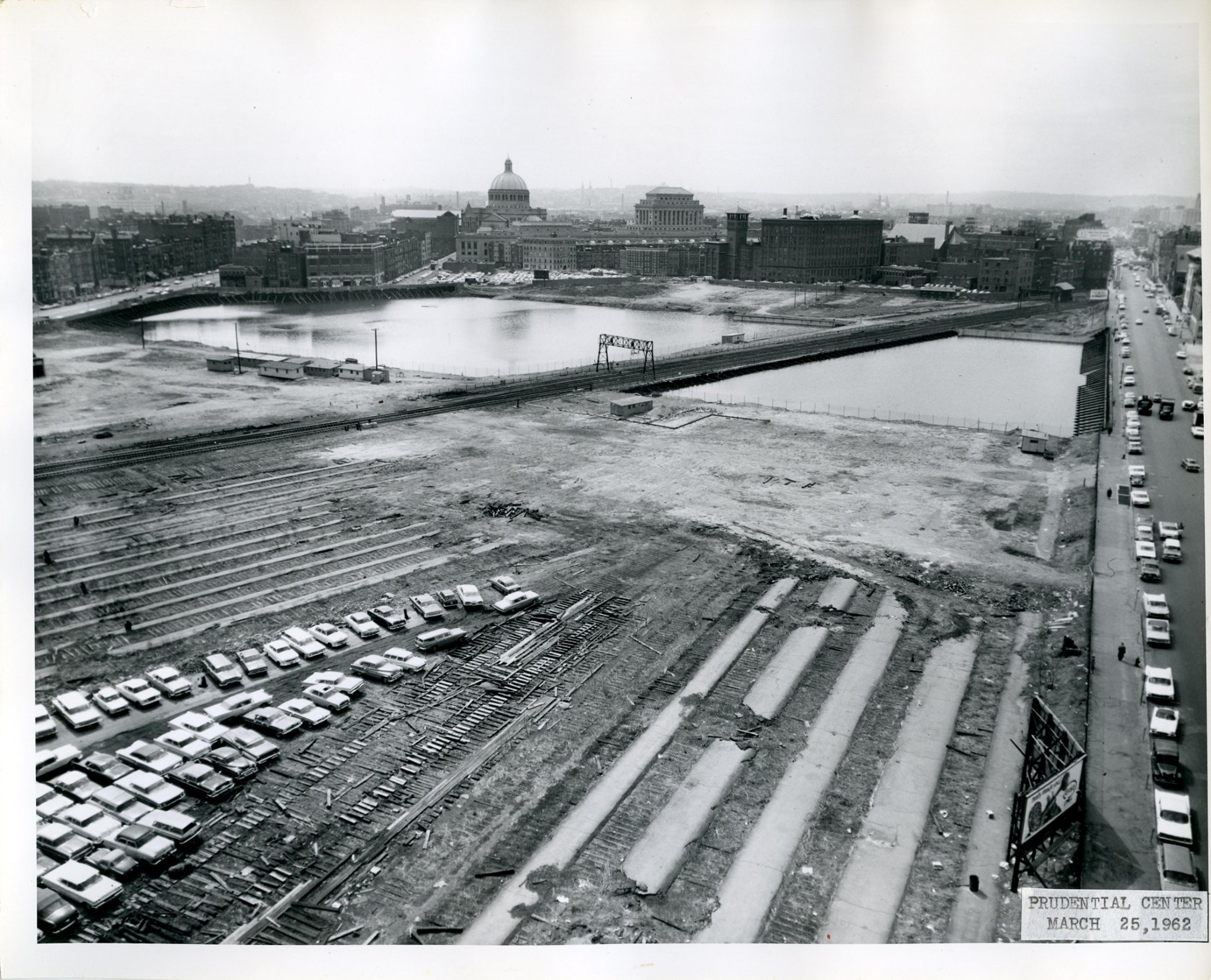