Vagabond said:
So no specified funds for the Red-Blue, but it is authorized.

The GLX to Route 16 was originally scoped out at $190M, transferred to fund the Phase I. What caused the price to drop in half? Were they able to include portions in the current construction?
Click to expand...

I may have been reading things wrong... Phase 2 may refer to funding more of the College Ave portion? Unclear:

About the Green Line Extension Project

The Green Line Extension (GLX) project will extend the existing MBTA Green Line north from Lechmere Station to further service in Somerville, Cambridge, and Medford. The GLX project is scheduled for completion in December of 2021.

Equilibria said:
Relocation of Storrow Drive at Charles Circle under a single arch of the Longfellow Bridge ($108M) and a bunch of other stuff.
Click to expand...

Would this involve just crimping the south/west bound side back away from the riverfront under the same arch as the north/east bound lane? That's be nice.

Also just a side note, how flipping weird is it that there's a surface lot jammed between there north of MGH? What a CF of entrances/exits/ramps. I suppose it's not really a nice place for a park anyway.
F

Would this involve just crimping the south/west bound side back away from the riverfront under the same arch as the north/east bound lane? That's be nice.

Also just a side note, how flipping weird is it that there's a surface lot jammed between there north of MGH? What a CF of entrances/exits/ramps. I suppose it's not really a nice place for a park anyway.
Click to expand...

Hadn't heard about a 2-for-1 under Longfellow, but they have long been planning to compact the Charles Circle ramp sprawl east of there to zero out the center MGH lot and trade more park acreage to Ebersol Field. Would invole changing those dangerous left-hand ramps to saner right-handed and ease out some of the S-curve nuttiness with the overall sprawl-compacting.
S

Considering it's $108 million currently, I presume that Storrow/Longfellow work is pretty intense and comprehensive.

Some more things, scrolling through:

There is language about building a Wonderland commuter rail station and protected pedestrian bridge between it and the BL station. Didn't see a price tag, though.
S

^ Also no price tag for a feasibility study for RLX to Arlington.

stefal said:
^ Also no price tag for a feasibility study for RLX to Arlington.
Click to expand...

Reading through a bit more, I think the way this works is that there is, for example, $3 billion for MBTA capital projects, of which several hundred million is earmarked to specific things (eg the $200M for Fairmont and Stoughton electrification), and of the rest, the MBTA has some discretion over how much is spent on particular items listed, so long as they do it. Also not clear to me, is whether these amounts are multi-year or meant to be used just in the current budget cycle.
B

this may not be the states plan

Includes funds for Red-Blue, CR Electrification (at least $200M to do Fairmount and Stoughton, at least $200M to do the EJ corridor to Beverly), GLX to Route 16 ($100M), relocation of Storrow Drive at Charles Circle under a single arch of the Longfellow Bridge ($108M) and a bunch of other stuff.
Click to expand...

Thank you for providing this information. The bill itself is indeed an excellent read.

Rail-related items of interest which stuck out to me:

For the purpose of implementing sustainable transit system modernization investments and rail improvements pursuant to chapter 161A of the General Laws...

...construction and reconstruction, improvement, expansion, renovation, repair, relocation and equipping of maintenance and storage facilities, including, but not limited to, technology to support and service battery electric, hybrid and other low emission transit vehicles; and for heavy rail, light rail and bus projects, which projects shall include, but shall not be limited to, the red line, orange line, green line, silver line and blue line...

...modernizing the bus fleet and associated infrastructure of the Massachusetts Bay Transportation Authority system, including, but not limited to, implementation of the so-called Better Bus Project...

...purchase rolling stock for use on the commuter rail system that reduces the overall environmental and emissions impact of the rail network to the greatest extent possible...

...planning and feasibility studies and the capital costs of pilot projects to test new service models such as regional rail and urban rail...

... not less than $30,000,000 shall be expended for the renovation and upgrade of the MBTA’s Hynes Station to make it ADA accessible...

HenryAlan said:
There is language about building a Wonderland commuter rail station and protected pedestrian bridge between it and the BL station. Didn't see a price tag, though.
Click to expand...

No price tag because it's not a currently recommended top-priority action item, on account of (multiple) previous studies showing it producing extremely little ridership. Essentially, what they're now calling for is a re-factor of the prior study results using RUR service levels instead of conventional peak/off-peak like before...then seeing if there's any 'there' there. Because if the ridership doesn't show an sea-change difference vs. before with the new service levels, no one in their right mind would advance it to implementation and thus attaching dollar figures would be meaningless. This is in sharp contrast to South Salem Station, for example, which has been studied to death with buff ridership under 'conventional' peak/off-peak service that fed into RUR now makes it slammiest-dunk for construction starts.

Not so with Wonderland. Refactored service levels have to show more people attempting to make the transfer than before, or it's just as D.O.A. as before. As that would be the system's single-longest walk transfer regardless of whether the walkway is sheltered or not and Wonderland-as-transfer-prospect is a wholly artificial creation of the distended bus running from Lynn Terminal for Lynn not having the rapid transit link yet...it's statistically unlikely that the corresponding service increase is going to show the corresponding increase in transfer traffic. Transfers are already thoroughly discouraged there by combo of extremely long walkshed + endemic brittleness of the bus routes @ Wonderland after they've accrued too much ragged cycling on the 1A-duplicating route miles from Lynn. Ridership is likely to remain moribund because frequency targets never had anything to do with why transfer traffic was self-inhibited there in the first place.

As a Legislative to-do they thus aren't sticking their necks out very far at all here for 'Zombie Wonderland' CR. It's simply a case of: if the numbers now pop fed through RUR traffic levels, expedite advancing for consideration because that's due diligence now that we have have a firm concept of what RUR service levels will be...but few truly expect that will be the study result here so don't prematurely allocate $$$ for something that's fairly unlikely in the end to wash.
A

Can someone ELI5 what this actually means for the projects? On a scale of "toothless resolution" to "GLX-style legal mandate" how much does this mean those projects are definitely going to happen?

If it's leaning towards the latter that's actually pretty incredible, especially under the current circumstances.

For comparison, last month's COVID bill included $14 billion for public transit, and we are set to receive between $250-300 million, still not set in stone. Comparable cities like Seattle, DC, and San Fran got a good chunk of change more than Boston did. If someone has a better comparison for MBTA's system, or an explanation to the divvying-up that was done in the previous bill, that'd be appreciated. I'm basing it off this series of tweets, which have been relatively close in the final estimates being given to agencies. 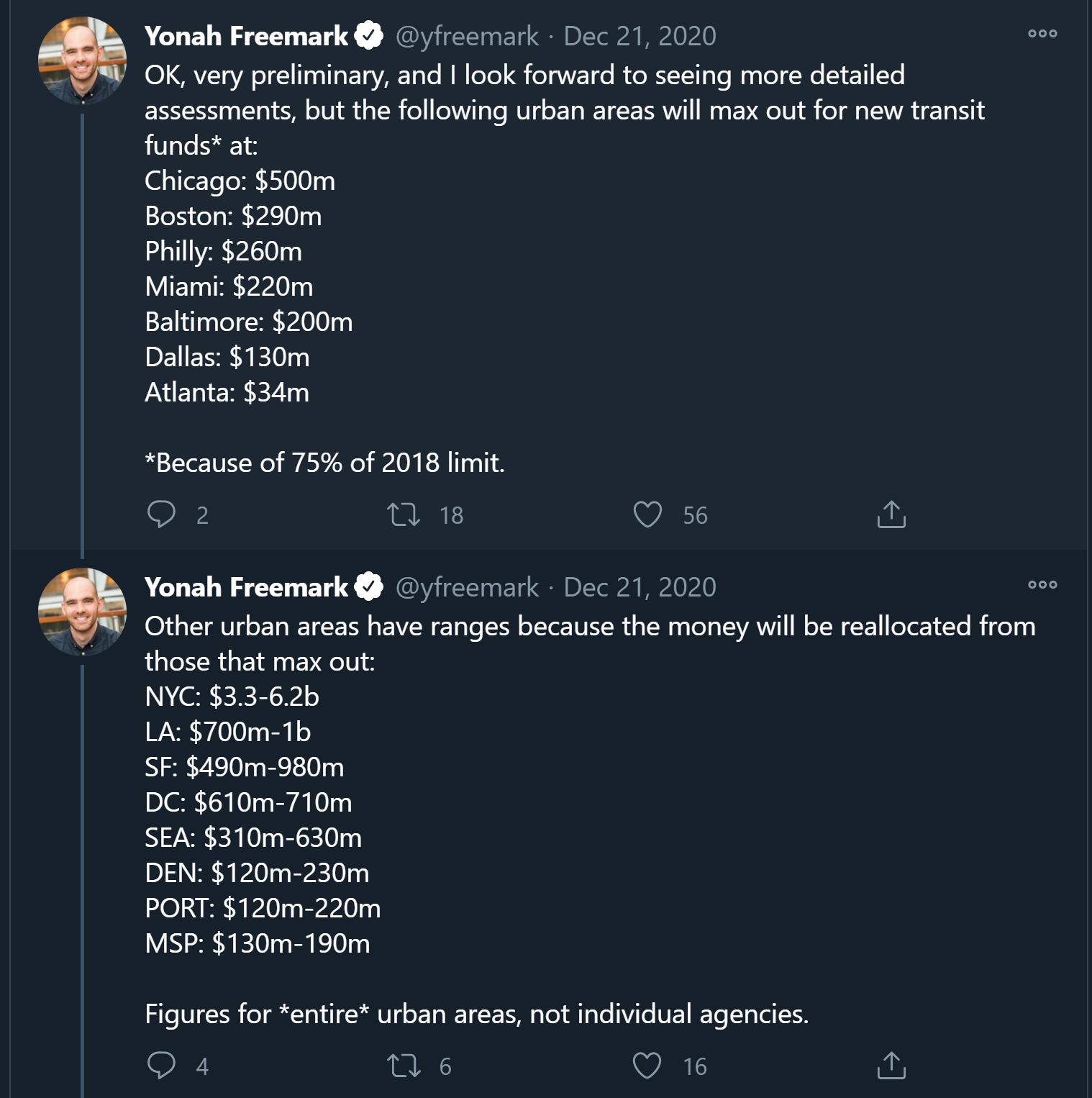 MBTA is planning on using $17 million to restore service on critical bus lines and commuter rail lines, $178 million into the long-term capital investment fund, which was slashed by $460 million at the beginning of COVID planning, and whatever remaining amount (50-110m) into funding for an expected increase in service in the second half of 2021. It's unclear if the $460 million long term capital investment fund is part of the expected up-to-$500 million shortfall they expect in 2021, but if it isn't, we're still short by around $900 million.

Here's the language from the Biden Admin:

"Hardest hit" is a difficult term to argue the merits around.

For comparison, DC Metro, after receiving $600 million from last month's bill, was left discussing their $171 million gap for the next year, and were pondering layoffs and service cuts in 2022 to cover the costs. That's likely off the table, so long as they receive over/around $100 million in the next bill.