I was surprised to find we don't already have a thread about this bridge. It has so much potential.

B&T staff photo by Saul Williams
Part of the abandoned operator?s house in Boston Harbor is slated for demolition this week.

A portion of the dilapidated operator?s house at the Northern Avenue Bridge, a landmark in Boston Harbor since 1908, could be demolished as early as Wednesday.

Boston?s Public Works Department (PWD) has filed an application with the city?s Landmarks Commission seeking permission to raze a portion of the one-story, wood-frame building built on pilings.

An inspection last month by Boston?s Inspectional Services Department revealed several wooden pilings that prop the shingled structure above the water gave way. As a result, the building is sagging and officials fear it could fall into the water.

?Most of the pilings will stay and only those in immediate hazard of failing and floating into the harbor will be removed,? said Robert Rottenbucher, Boston?s chief structural engineer. ?We may not have to take down the entire building.?

The decision to keep the remaining pilings is important, according to Vivien Li, executive director of the Boston Harbor Association. Under Chapter 91 of the state?s waterfront regulations, if the pilings were removed, nothing could be built on the site.

Historic Bridge
The Northern Avenue Bridge is a rare surviving example of a steel-framed operable swing bridge, and serves as a symbol of the fading maritime and industrial heritage of Boston?s historic seaport, according to Historic Boston, a non-profit organization whose mission is to preserve endangered historic sites.

The city?s Engineering Department designed and built the bridge to provide additional vehicular, pedestrian and railroad access to the rapidly expanding wharves, warehouses and factories along the waterfront.

Until 1997, the house was staffed by an operator who opened and closed the bridge for boats with a unique compressed air pump system. That year, the bridge was closed to traffic when inspectors deemed it unsafe. The operator?s house was also closed. The task of operating the bridge moved to a trailer located on the bridge that replaced the air tanks with an electric system.

A public hearing on the demolition will be held at Boston City Hall on Tuesday at 5:30 p.m. At press time, the city was determining how much of the building could be spared.

Steven Hollinger, a member of the Seaport Alliance for Neighborhood Design, said the building is worth preserving.

?It?s an amazing piece of history, so I hope it can be saved,? he said.
Click to expand...

Is it an important piece of city history or a rundown shack on a crumbling pier in Boston Harbor?

That?s the debate as City Hall moves ahead with plans to demolish part of the ?tender?s house? next to the rusting, old Northern Avenue Bridge on Fort Point Channel.

The boarded up and rambling structure served for nearly a century as a home for the keepers of the rotating swingbridge - who had to be available, night and day, to let ships through.

Now city officials, saying the structure has become dangerously unsound after some pilings collapsed, are moving ahead with plans to demolish about half of it and mothball the other. Plans are also being drafted to renovate the bridge and raise it up so it no longer has to rotate to let ships through.

The decision to spare part of the bridge tender?s house comes amid an outcry by some residents in the Fort Point neighborhood.

?This is one of the last vestiges of the working waterfront,? said Michael Tyrrell of the Fort Point Neighborhood Assocation.

In a key step, the Boston Landmarks Commission voted Tuesday to approve the partial demolition, but with a string of conditions. City officials will have to ensure the structure is throroughly photographed and documented before demolition begins, likely early next week, among other things.

Where some see an unsightly shack, supporters of the tender?s house see a link to a time when the harbor was full of ships and the waterfront was teeming with sailors and fishermen, not luxury condos.

But the tender?s house in recent years fell into disrepair. The modern-day bridge keepers - recently a source of controversy after being photographed by the Herald grilling and watching TV while on the clock - now operate out of an air-conditioned trailer on the bridge?s deck.

?This is demolition by neglect,? said Valerie Burns, a Fort Pont resident.

However, city officials say they also care about the quirky tender?s house and are scrambling to save all they can of it. The partial demolition will cost about $100,000. The impending demolition was first reported by Banker & Tradesman.

?Personallly, I would like to err on the side of caution than to tear something down that can?t easily be replaced,? said Robert Rottenbucher, the city?s chief engineer.
Click to expand...

That bridge has been decaying for half a century or so. Every now and then someone proposes a restaurant or market or something, and it goes back to rusting away.

Before Moshe Safdie designed the new Peabody-Essex Museum, there was talk of a Boston-annex of the PEM. It would have been an over-water design. I recall interlocking stainless steel shells incorporating the bridge, which I believe would have been glazed.
S

Check this out...pretty big news. I wonder what the plan is...I'm guessing something disappointingly timid.

Please join Mayor Thomas M. Menino, the Boston Public Works Department, and the Boston Redevelopment Authority for the announcement of the restoration project for the

Finished in 1908, the Northern Avenue Bridge is an operable steel three span, triple barreled Pratt-type through-truss bridge. The center span is a rim-bearing swing bridge. The City of Boston constructed the bridge to serve maritime industrial needs related to the development of Commonwealth Flats as a port in South Boston. The bridge is currently used as a pedestrian crossing.

If you have any questions regarding the meeting, please contact:

Do they plan to reopen any of it to vehicular traffic, or maintain it as purely a pedestrian crosssing?
A

I say derust the steel and buff it up. Then enclose the center section (the car lanes) in glass, leaving the outside sections open to the elements.

Then make the whole thing an art market a' la Karluv Most: 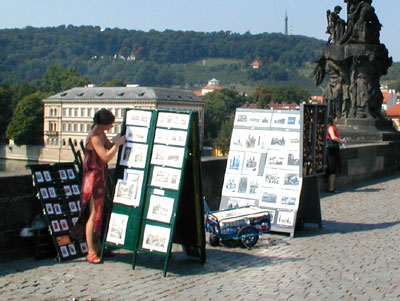 ^ Will the vendors all be babes?

Prague really didn't have a choice. There isn't an ugly girl to be found there.
A


statler said:
There isn't an ugly girl to be found there.
Click to expand...


Nearly a decade after Mayor Thomas M. Menino vowed to demolish the Northern Avenue Bridge, the administration is set to propose a facelift of the 100-year-old historic structure.

Jessica Shumaker, a spokeswoman for Boston Redevelopment Authority (BRA), declined to provide details in advance of the mayor?s announcement of the plan at community meeting to be held at the John Joseph Moakley Courthouse on Friday, Nov. 14 at 6:30 pm. But a handful of sources expect the city to float a plan that would restore the 636-foot-long steel-framed operable swing bridge.

Under the proposal, the structure would be raised so boats could pass beneath without opening the manually operated swing bridge, according to sources familiar with the plan. One lane would be used for vehicular traffic, another lane would be devoted to pushcart vendors and a third lane would be reserved for pedestrians, sources said.

The bridge stretches across Fort Point Channel and links South Boston?s Seaport District with the Financial Distinct. It is one of the oldest operable steel-framed swing bridges in the world. Today, the bridge is used as a pedestrian crossing.

Swingin? Back Around
Meaghan Maher, a spokeswoman for the Congressman Stephen F. Lynch, said Congress has allocated $9.4 million since 2005 for the bridge. She declined to comment on the project and referred a call to City Hall.

In 1999, the BRA received five proposals that included plans to either rehab the historic swing bridge and turn it into a commercial space with shops and cafes, or demolishing it and building a new bridge in its place.

At the time, the mayor vowed to replace the bridge because it was too expensive to repair. But preservationists and neighborhood activists including the Save the Old Northern Avenue Bridge organization convinced the mayor to reverse his decision.

Also that year, the BRA chose Forest City Enterprises, a Cambridge developer, and its proposal to replace the bridge with a 149,000-square-foot restaurant and shopping complex on pilings above the water.

Later, former Department of Public Works commissioner Joseph Casazza devised a plan to raise the bridge, encase part of it in glass and allow use by either a museum or commercial enterprises. But the $25 million price tag was deemed too expensive.

John Hynes, whose Seaport Square would be built within a block of the bridge, said the restoration of the bridge would enhance his project that will offer a mix of condominiums, office and retail space.

?I expect whatever the city does, it will be complementary to our project,? he said.

Valerie Burns, a longtime Fort Point resident, said the bridge restoration is of major importance to the neighborhood.

?We have been trying to save the bridge for a long time,? she said. ?But we would have to see any plan that would include vehicular traffic before we could give our approval.?
Click to expand...

Does it really need to be reopened to vehicular traffic?
A

^ Just one lane in each direction; this will provide animation without overwhelming.

Makes a nice mix with the pushcarts. Teeming humanity on Saturdays?

Picturesquely Third World, if you think about it. Boston needs a little of this; Haymarket alone is not enough.
J

Its so much better as a pedestrian only bridge.
A

I'm in favor of reopening this to vehicles.

I understand the idea of giving it a sense of activity, but it actually already a well traveled footpath, add some vendor carts and it becomes a destination as well.

I guess I'm stuck on this idea of this being Boston's St. Charles Bridge.
A


statler said:
I guess I'm stuck on this idea of this being Boston's St. Charles Bridge.
Click to expand...

The'yre both bridges, but thereafter it gets to be more and more of a stretch:

Is Fort Point Channel the Moldau?

Is the Northern Avenue Bridge the equal of the Charles Bridge?

Right now, one of the three sections is a pedestrian bridge while the other two are fenced off and useless to anyone. I would not strongly object to returning one of those sections to vehicular use.
U

I could go either way on opening the bridge to traffic. In general, I'm not a big believer that closing roads to vehicular traffic improves anything at all. However, that being said, it's not like Summer St., Congress St., and Seaport Blvd. are packed with traffic. In fact, opening up North Ave. might make traffic worse because cars would have to stop and wait to make turns onto and off of the bridge. Of course, once everything gets built down in the Seaport (around 2632, right?) all that could fly out the window.
You must log in or register to reply here.
Share:
Facebook Twitter Reddit Pinterest Tumblr WhatsApp Email Link