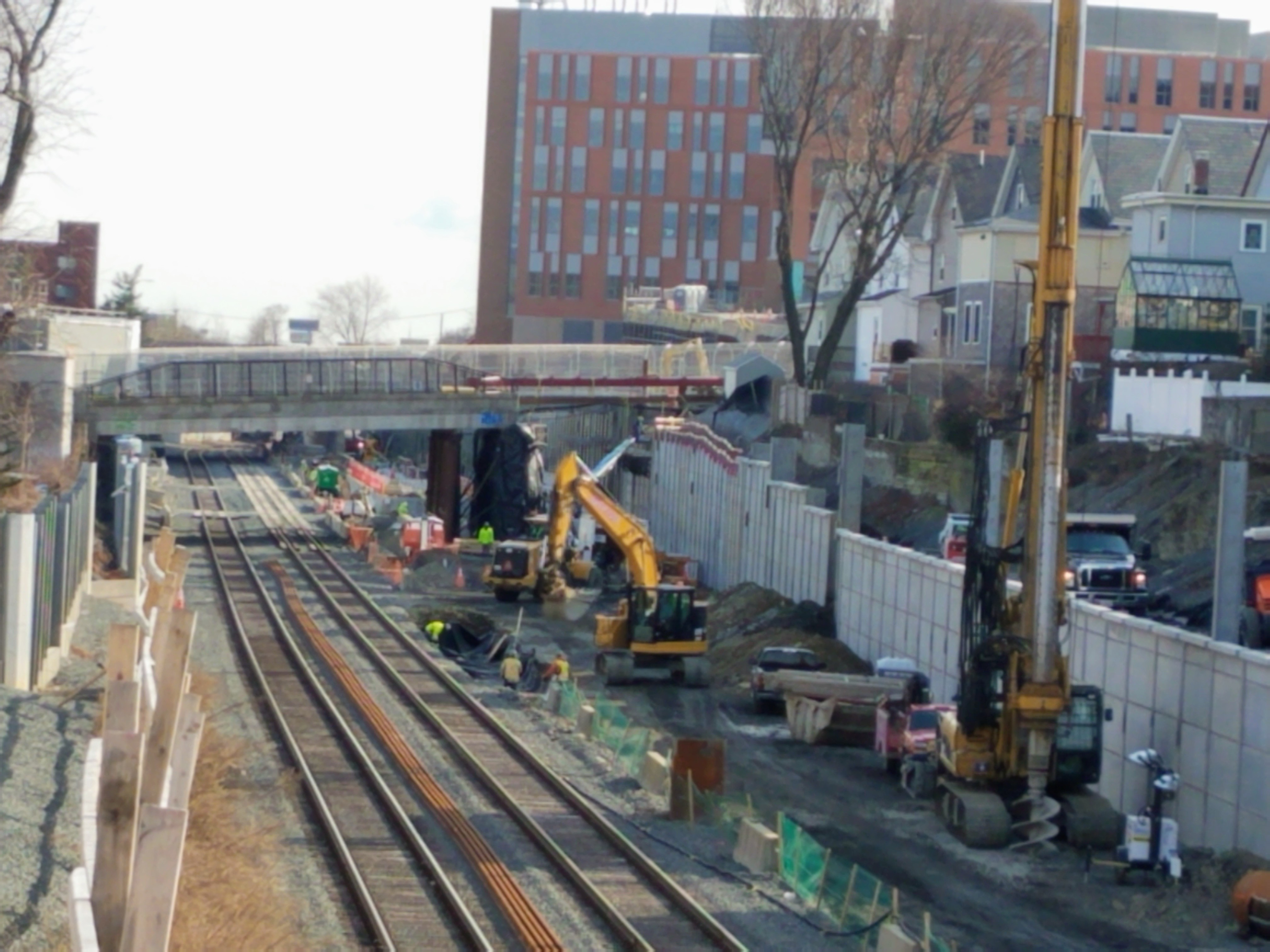 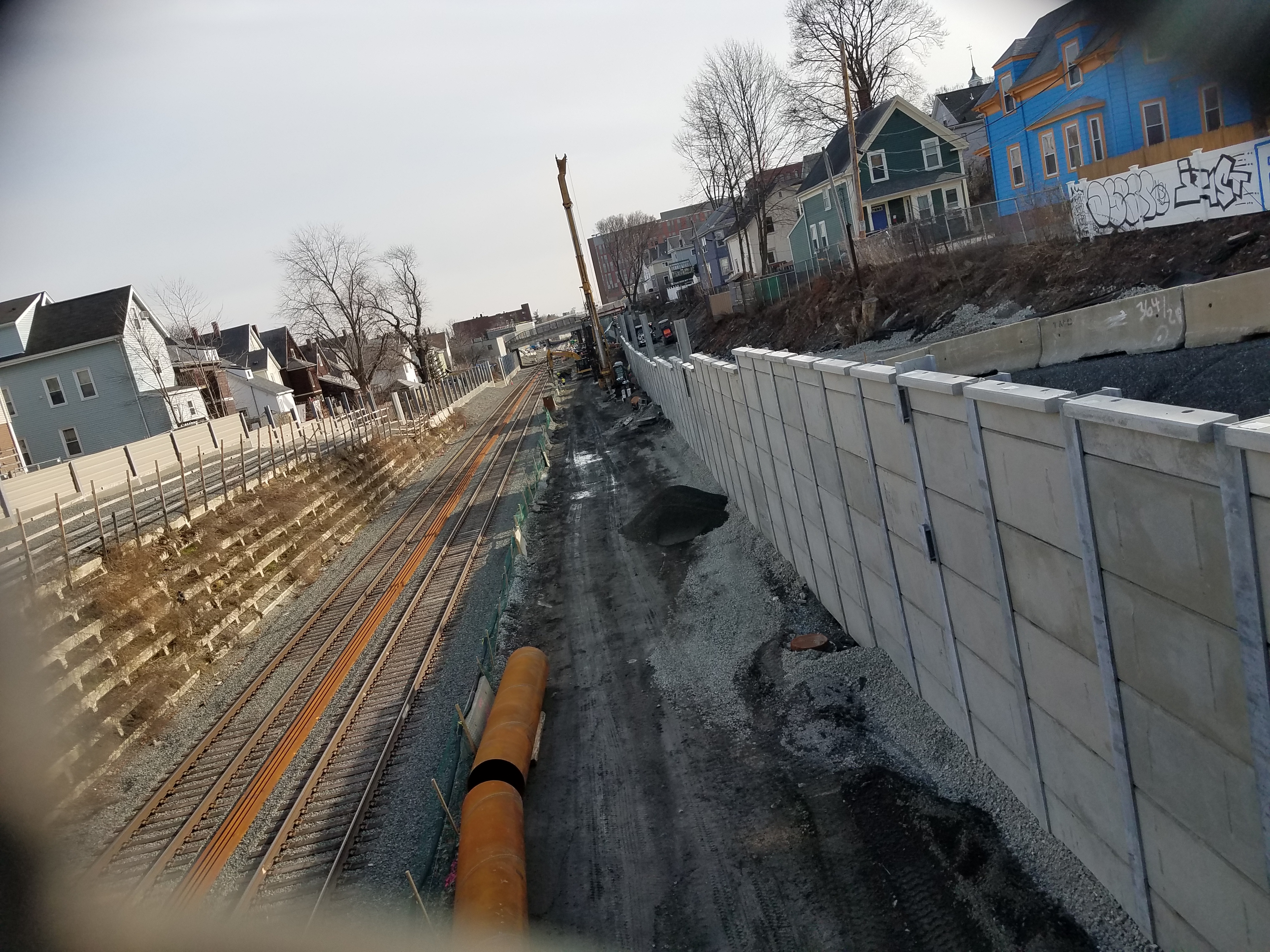 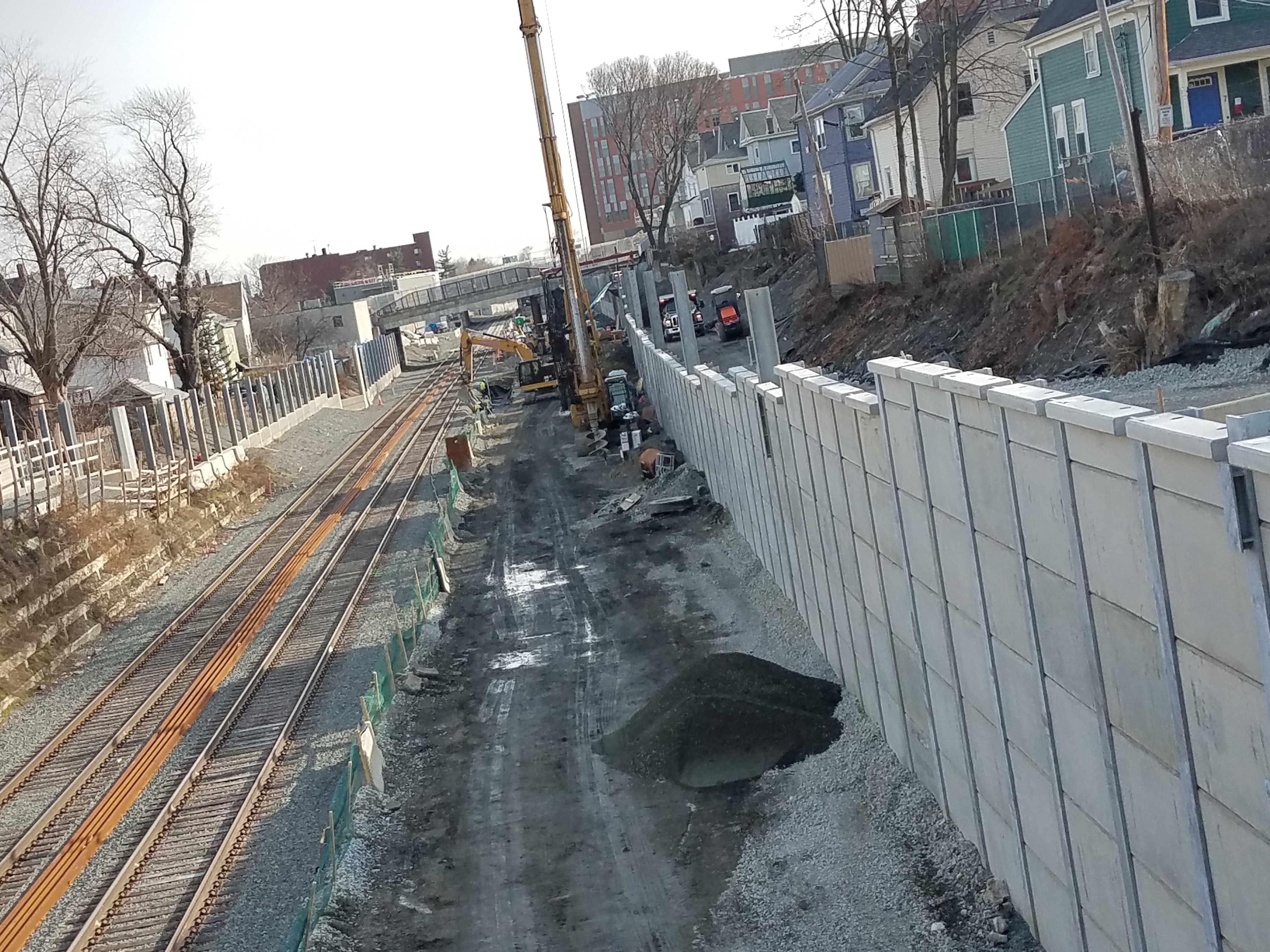 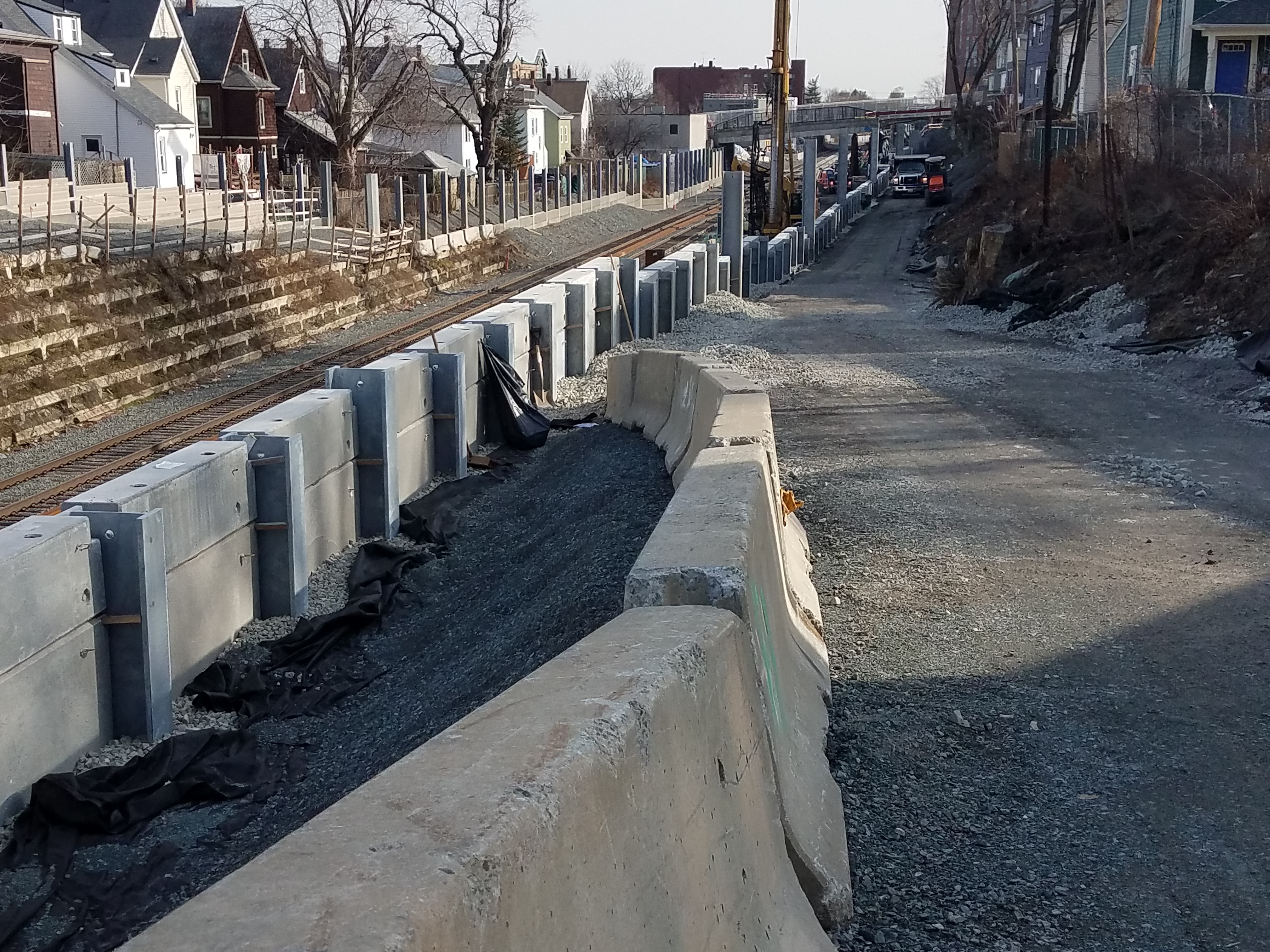 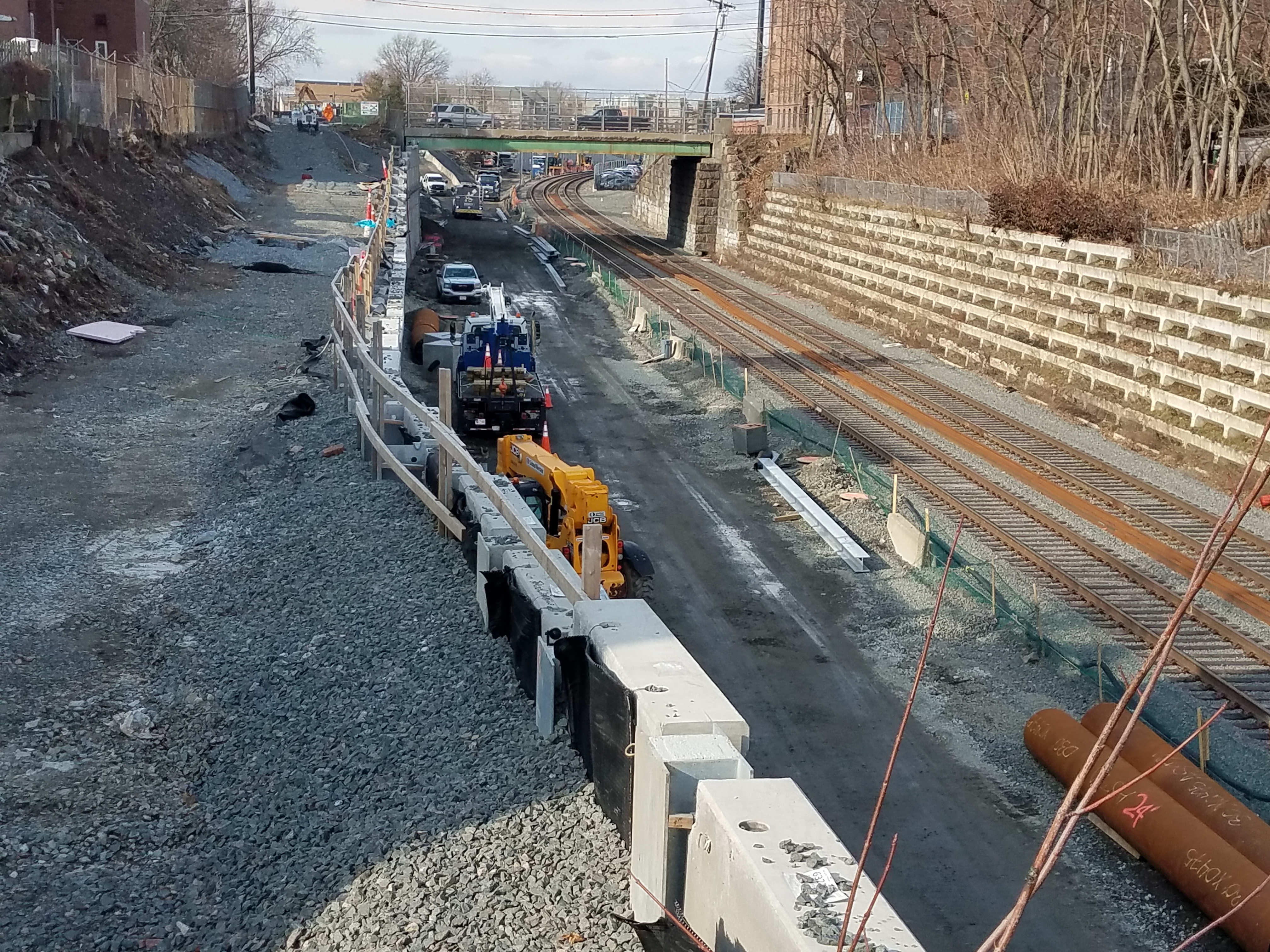 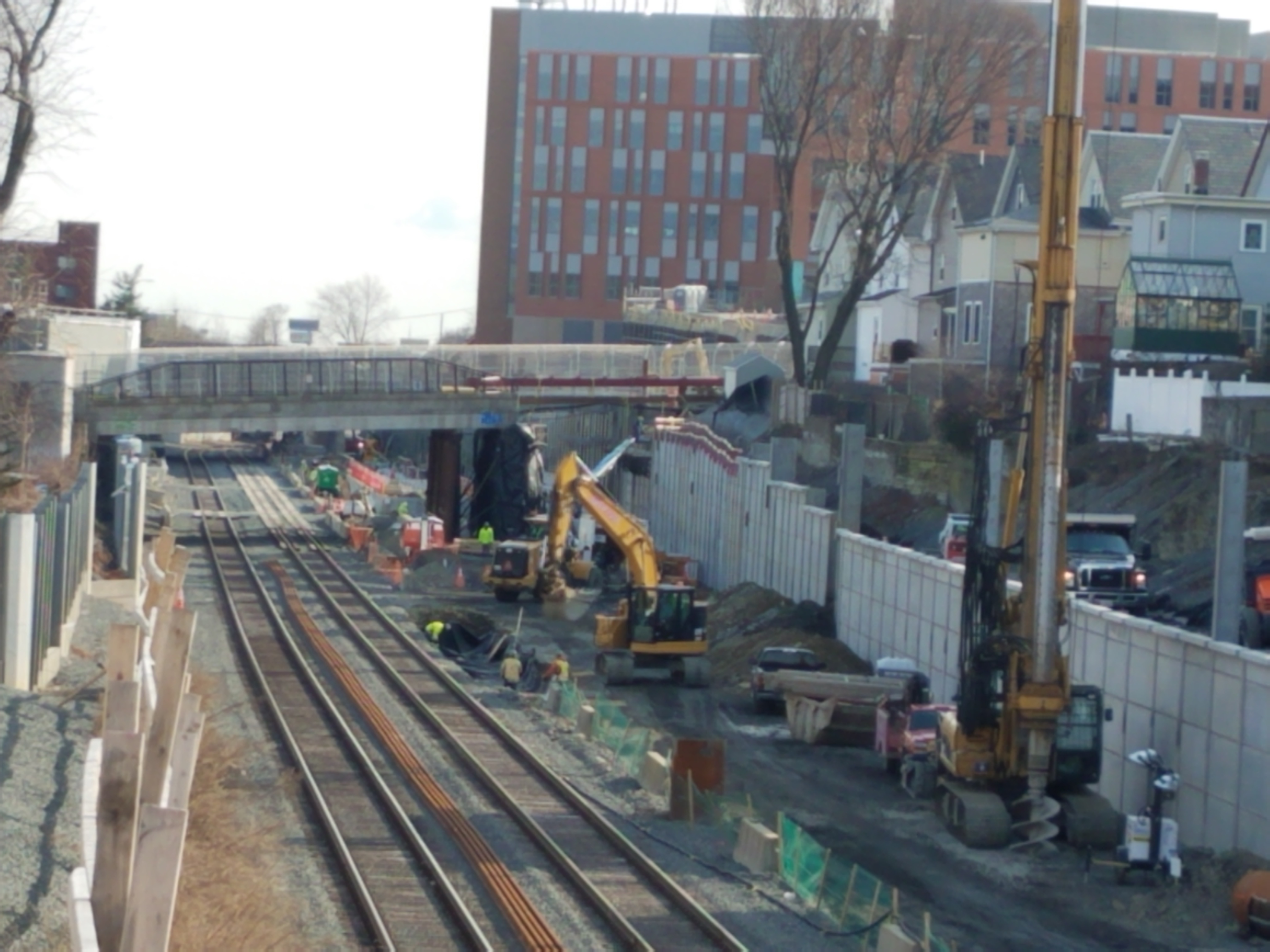 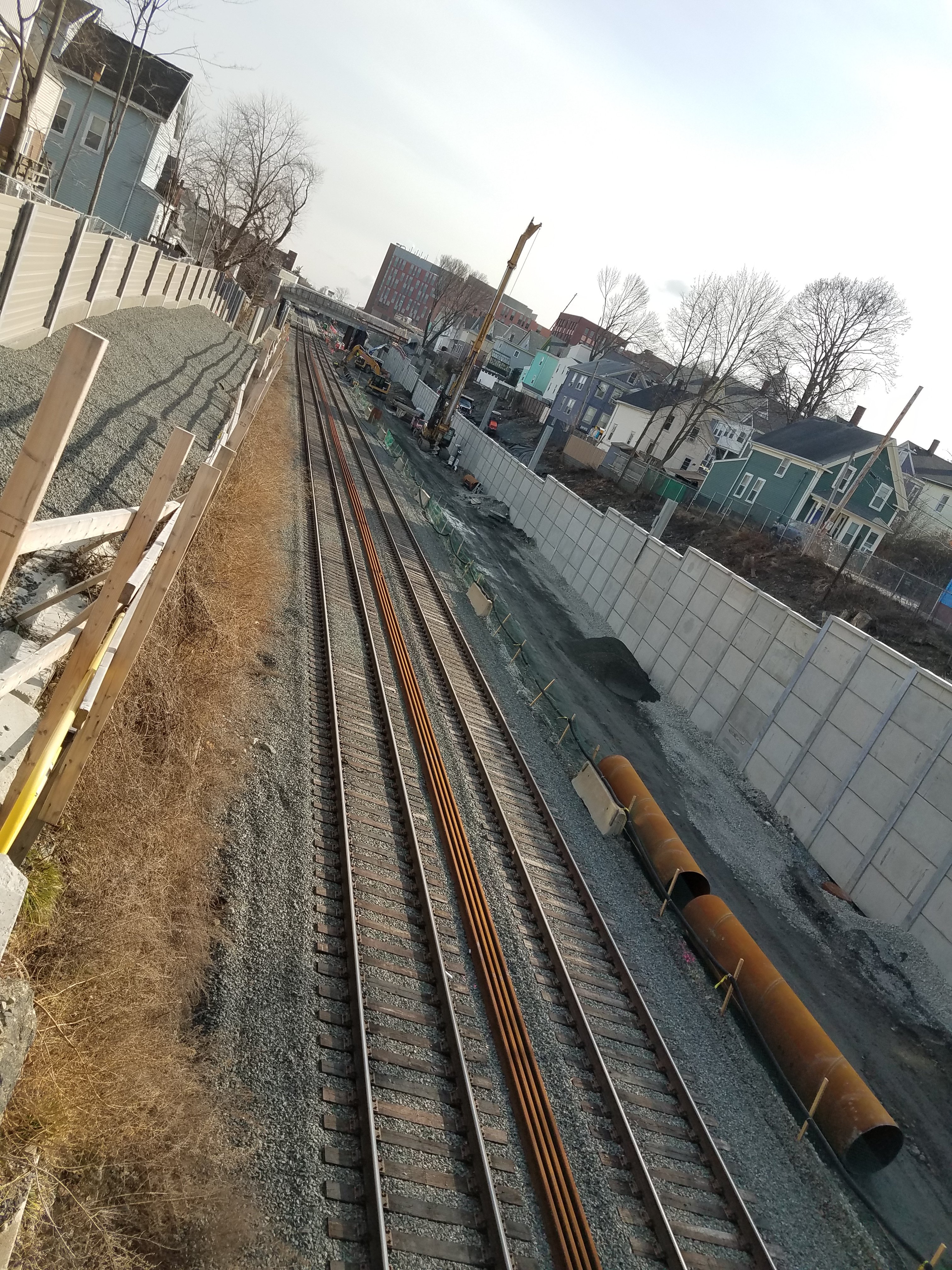 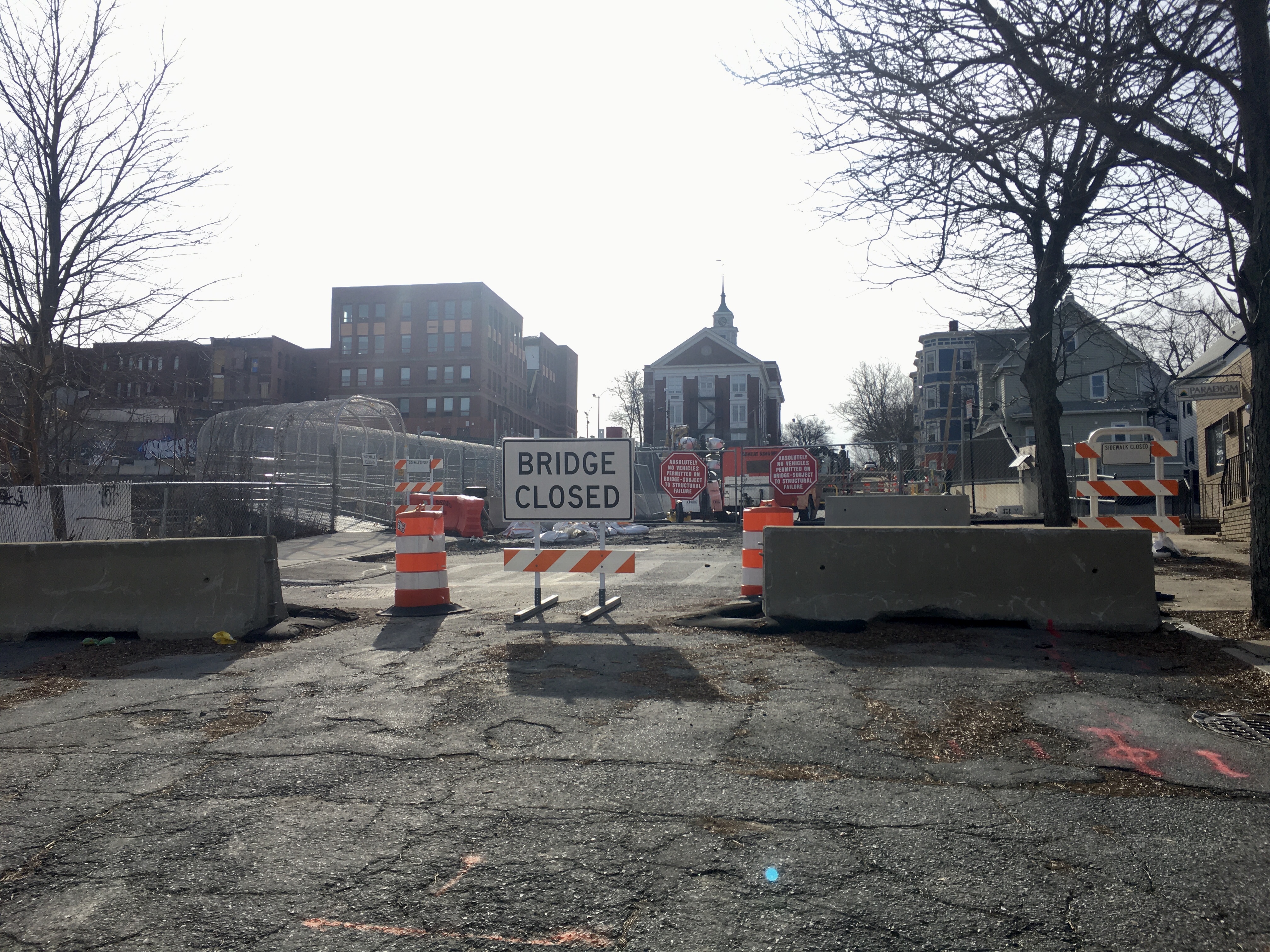 It seems that the commuter rail tracks have also benefitted greatly from this project as well. Looking at old pictures they seem to be much straighter now, with new trackbed, less wear and tear, and the last remaining remnants of old switching infrastructure from years past has been removed as well. Also the old unused rusting 3rd track scattered throughout the ROW is gone.

Looking at the CR tracks now its just two brand new perfectly straight and parallel tracks that goes exactly where it should, where before it looked like a system that went where it could within the constraints of what was leftover from before. It now looks brand new and like something that was designed from the start to follow the straightest path. Amazing!
Last edited: Jan 20, 2021

^ THere's all kinds of new crossovers, control points, & signals (including ones that have been obsoleted by PTC/Cab Signals), but I wonder how much they've actually been straightened? They've clearly benefitted from new & better drainage, new ties, and clean ballast (and way less scrub and trash trackside). (if we get too deep into CR, I'll move this to the "GLX impact on CR" thread that hasn't seen much action since the initial disruptions, Phase 1 bridge and trackside work, and the announcement of single-tracking and weekend bustitution)
F

Arlington said:
^ THere's all kinds of new crossovers, control points, & signals (including ones that have been obsoleted by PTC/Cab Signals), but I wonder how much they've actually been straightened? They've clearly benefitted from new & better drainage, new ties, and clean ballast (and way less scrub and trash trackside). (if we get too deep into CR, I'll move this to the "GLX impact on CR" thread that hasn't seen much action since the initial disruptions, Phase 1 bridge and trackside work, and the announcement of single-tracking and weekend bustitution)
Click to expand...

The ROW geometry is exactly the same as before. So it's just the cleanroomed state-of-repair. The corridor hasn't been substantially renovated since 1979 when the most recent signal system was installed and the Somerville Jct.-Lowell trackbed was undercut to swap the Plate F freight clearance route here (replacing the Fitchburg Line + Fitchburg Cutoff when the Cutoff was retired for the Red Line Extension). So the layout of control points was from a different era, and most else was in a state of in-situ maintenance stasis sans any upgrading. Up until the earliest pre-prep work for PTC the line annoyingly still retained an asynchronous south-of-Wilmington speed limit of 70 MPH one direction vs. 60 in the other. It's all evened up to standard-spec Class 4/79 MPH now (individual speed zones below the max will vary by geometry, but at least they're the same in either direction now).

Optics are pretty much just observational bias, as older-but-100%-state-of-repair won't run any different but you've obviously got some nice whiter ballast spread around and no weeds poking through to goose pure cosmetics. The one thing that is different is that with cab signals in effect there are no longer any signal lights on the ROW except at the automatic switches & crossovers...which reduces the amount of field hardware and does superficially make the ROW look cleaner because it's minus a few signal heads that used to be there.

The first proof of any performance benefit will be if the new fiber-optic signal plant installed throughout the co-mingled GLX area and some degree north of there allows them to target the West Medford grade crossing speed restriction. High St. has no traffic signals near the crossing and retains a staffed crossing tender, imposing a painful 30 MPH restriction on thru Downeasters and Haverhill-via-Wildcat expresses that skip West Med. Higher-tech traffic management has long been desired here, but the most oft-cited excuse (caveat: could very well be Joe Pesaturo B.S.) is that there was no nearby fiber plant for wiring up queue-dump signals timed to train passage. That may now be fully in-reach as result of all the inbound signal plant renewal. If they were able to install quadrant gates for stiffest protection around pedestrian darters (roadway has plastic-peg center dividers on both High & Canal, so is safe enough from vehicle gate-evaders), add a traffic light cycle for Harvard/Playstead abutting the crossing, and had the signal train-bombed for queue dumps the speed restriction could probably ease up to 60 MPH. We shall see the next time Medford has a townie bitch session about the crossings whether the "no fiber" excuse gets replaced by something else or if all parties are truly willing to get it done now. That's about the only coming attraction you could possibly direct-attribute to all this GLX-outflow work on the CR side.

Other than that, being regular old nonstop running track through the project area the other ancillary benefits are mainly "unsexy" related to refreshed state-of-repair and mildly simpler dispatching rather than anything that will show itself as 1 extra train or 1 minute in schedule savings.
J 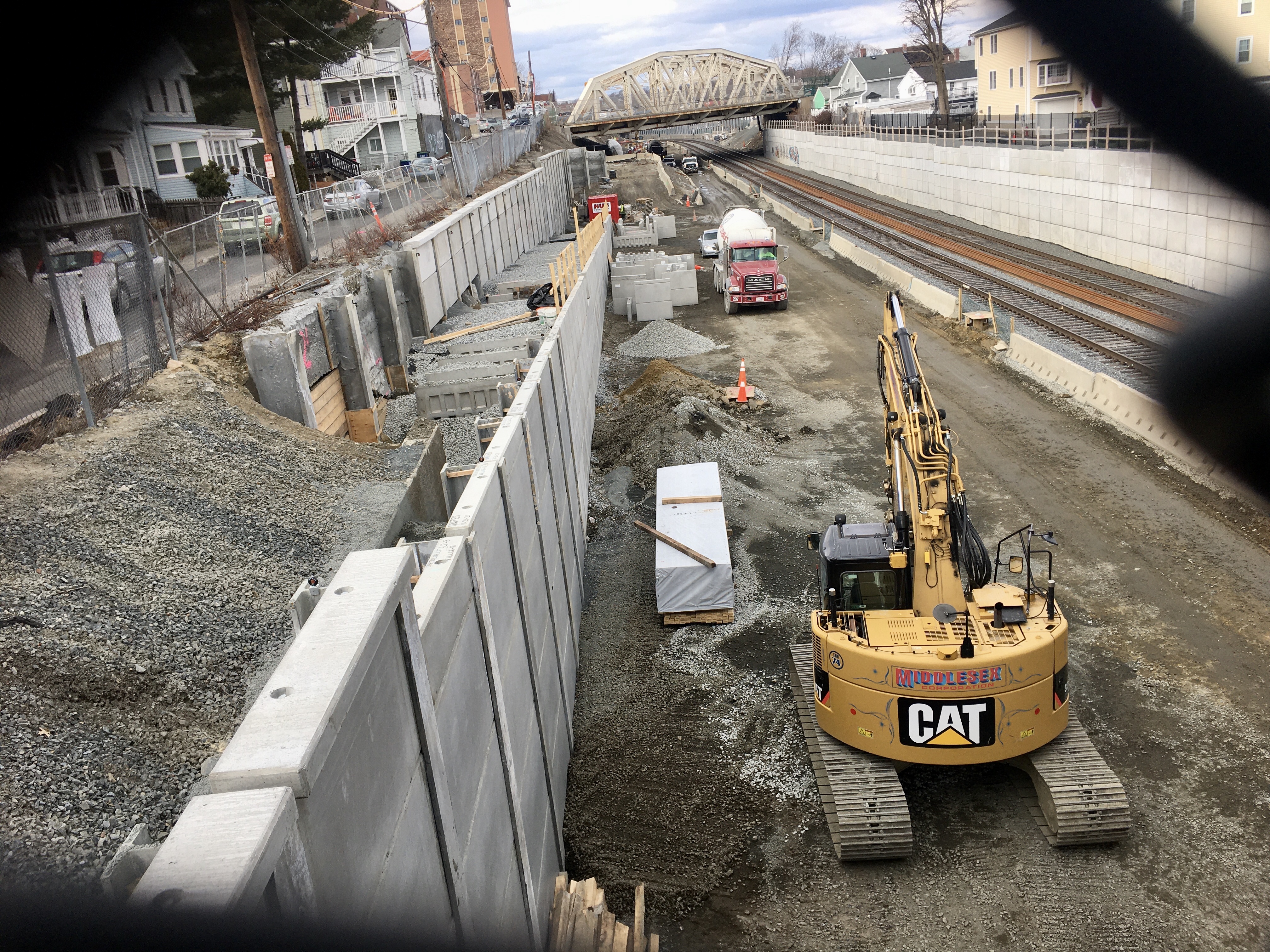 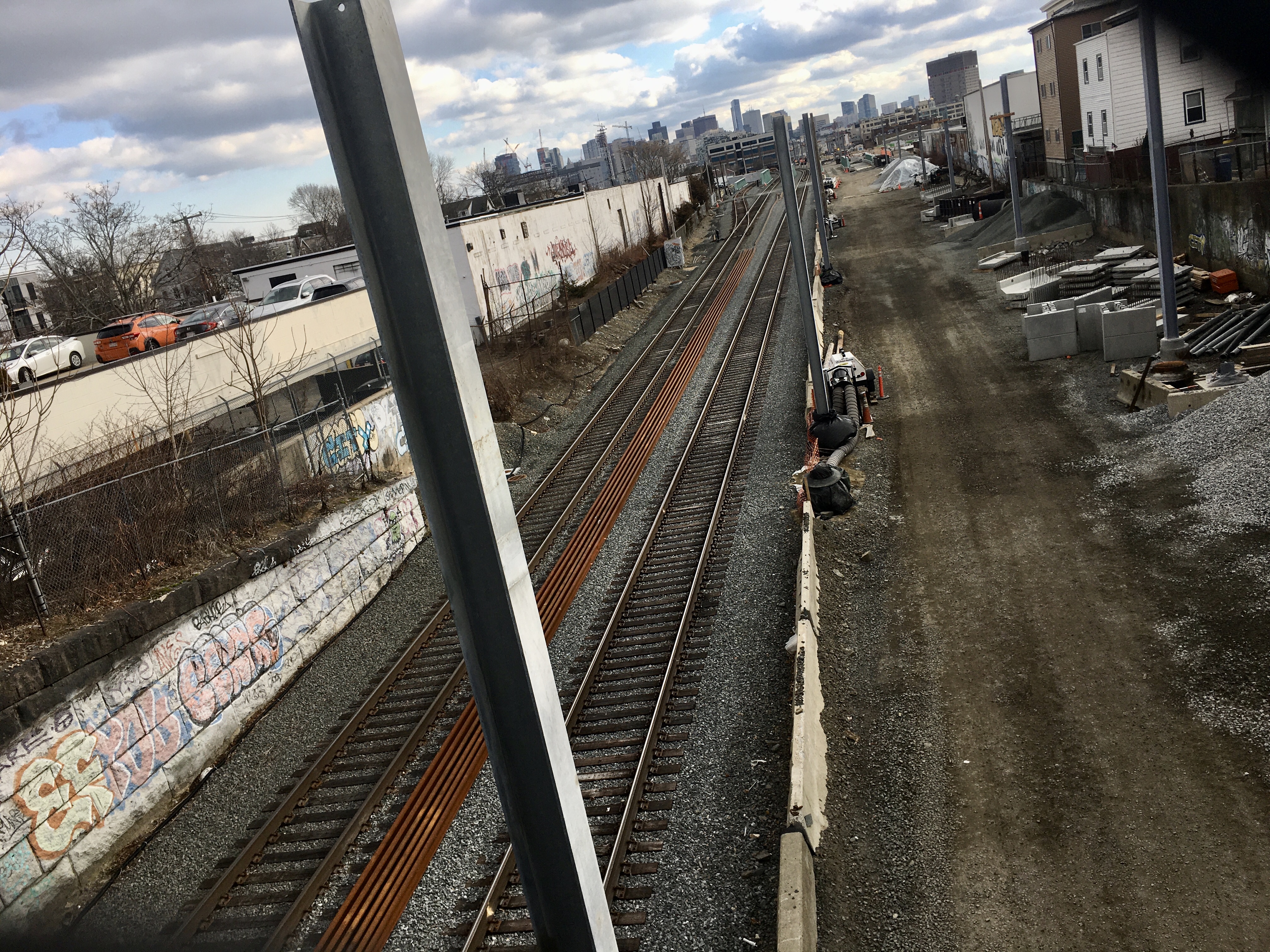 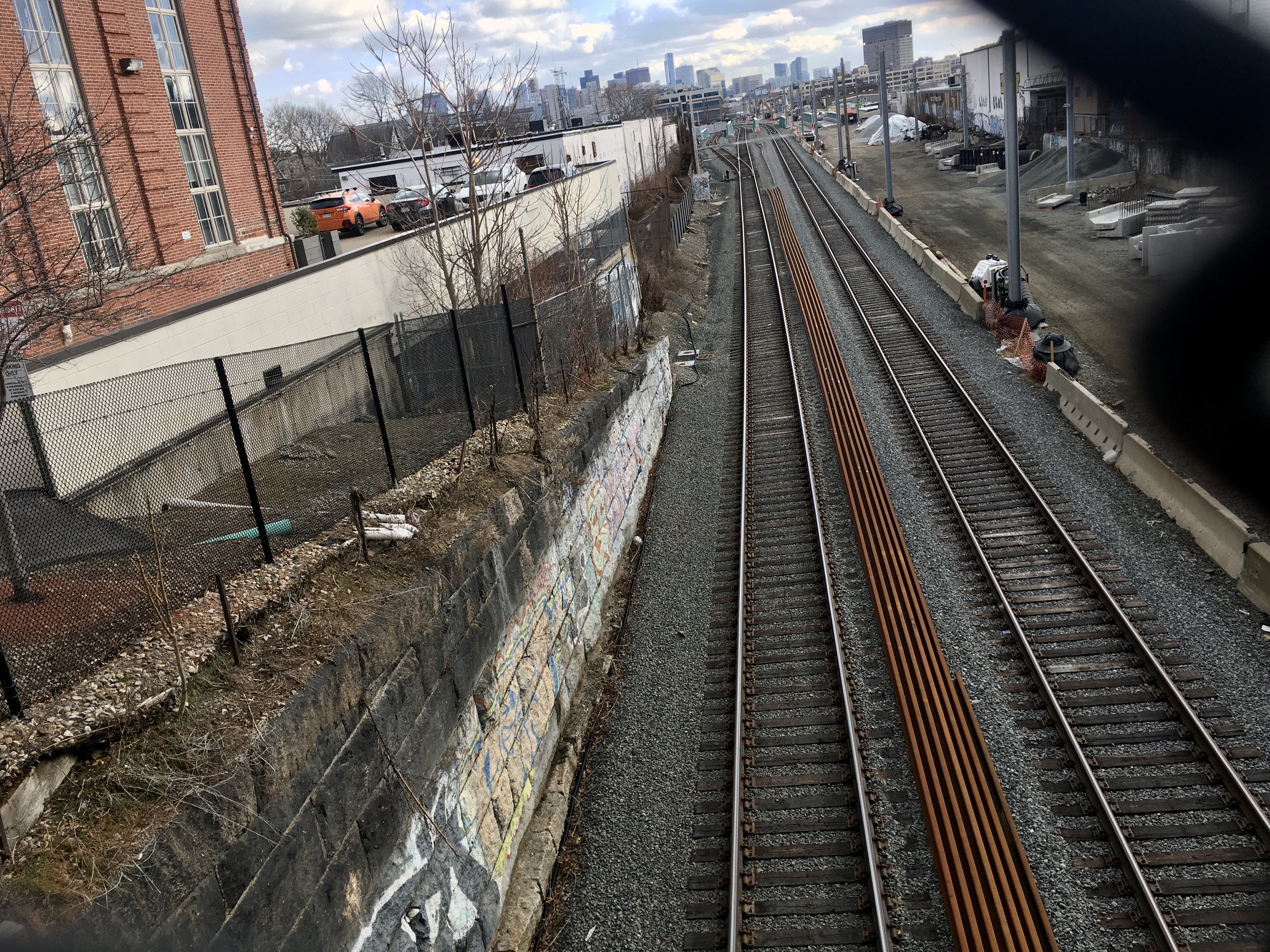 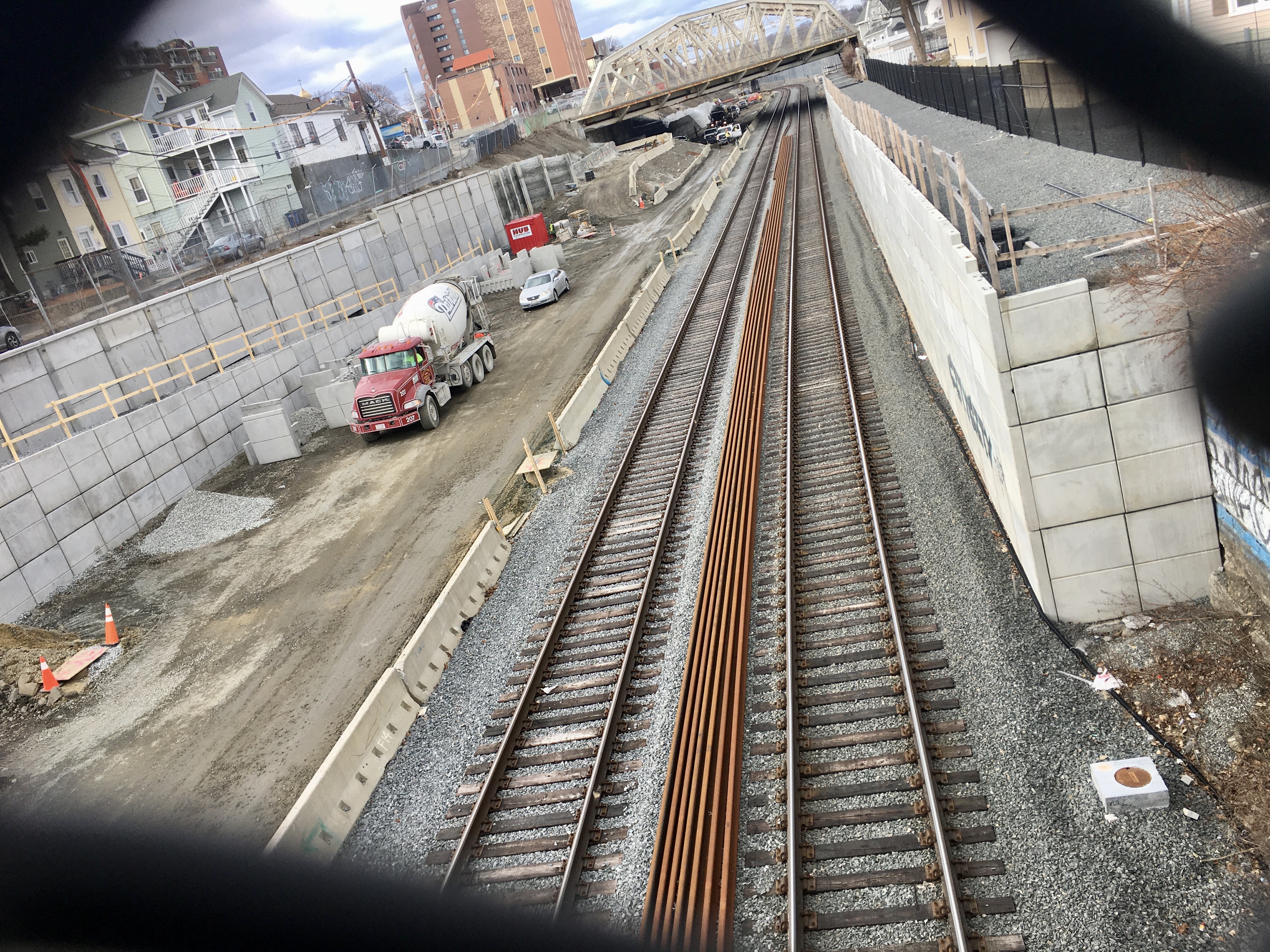 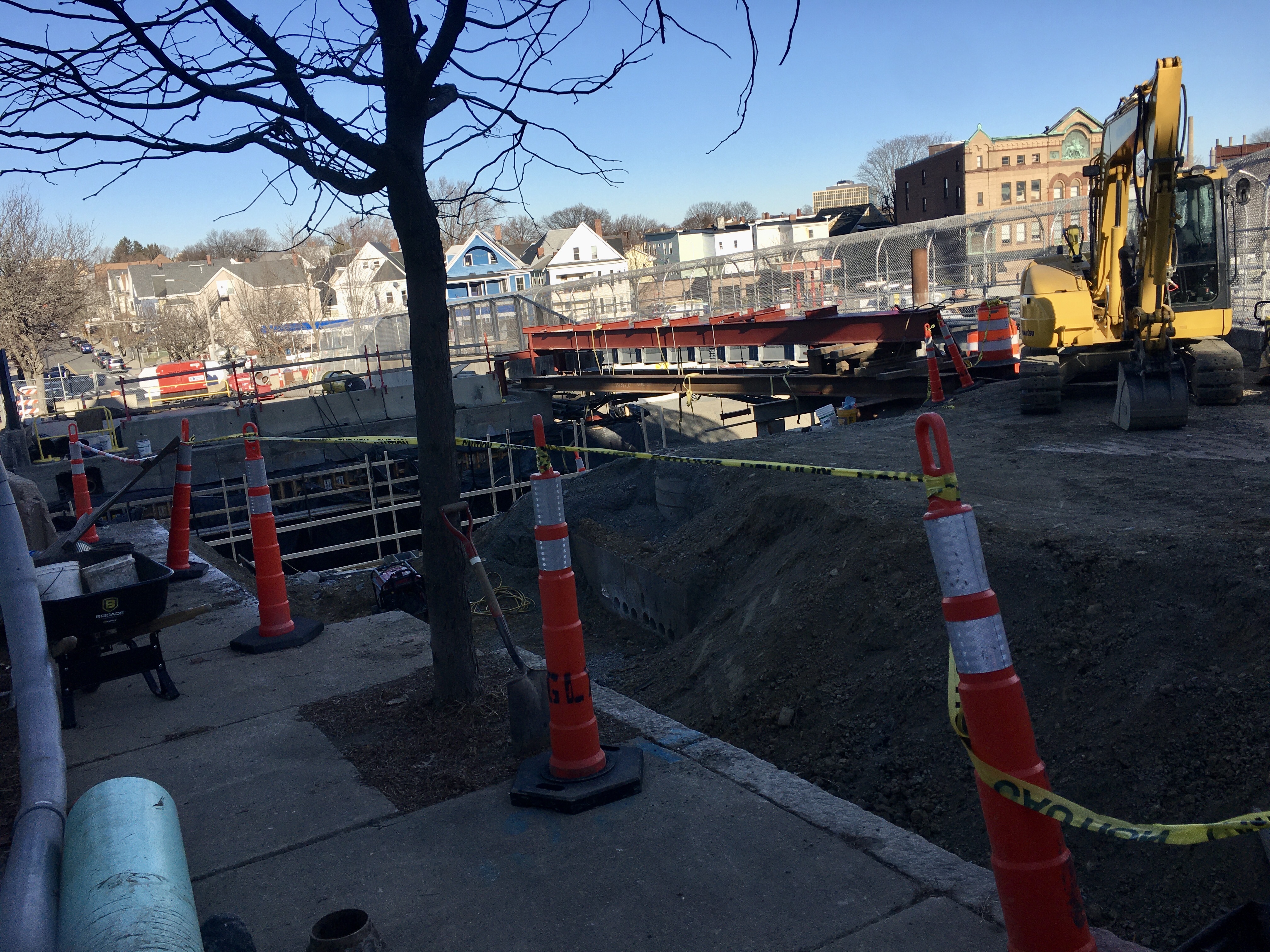 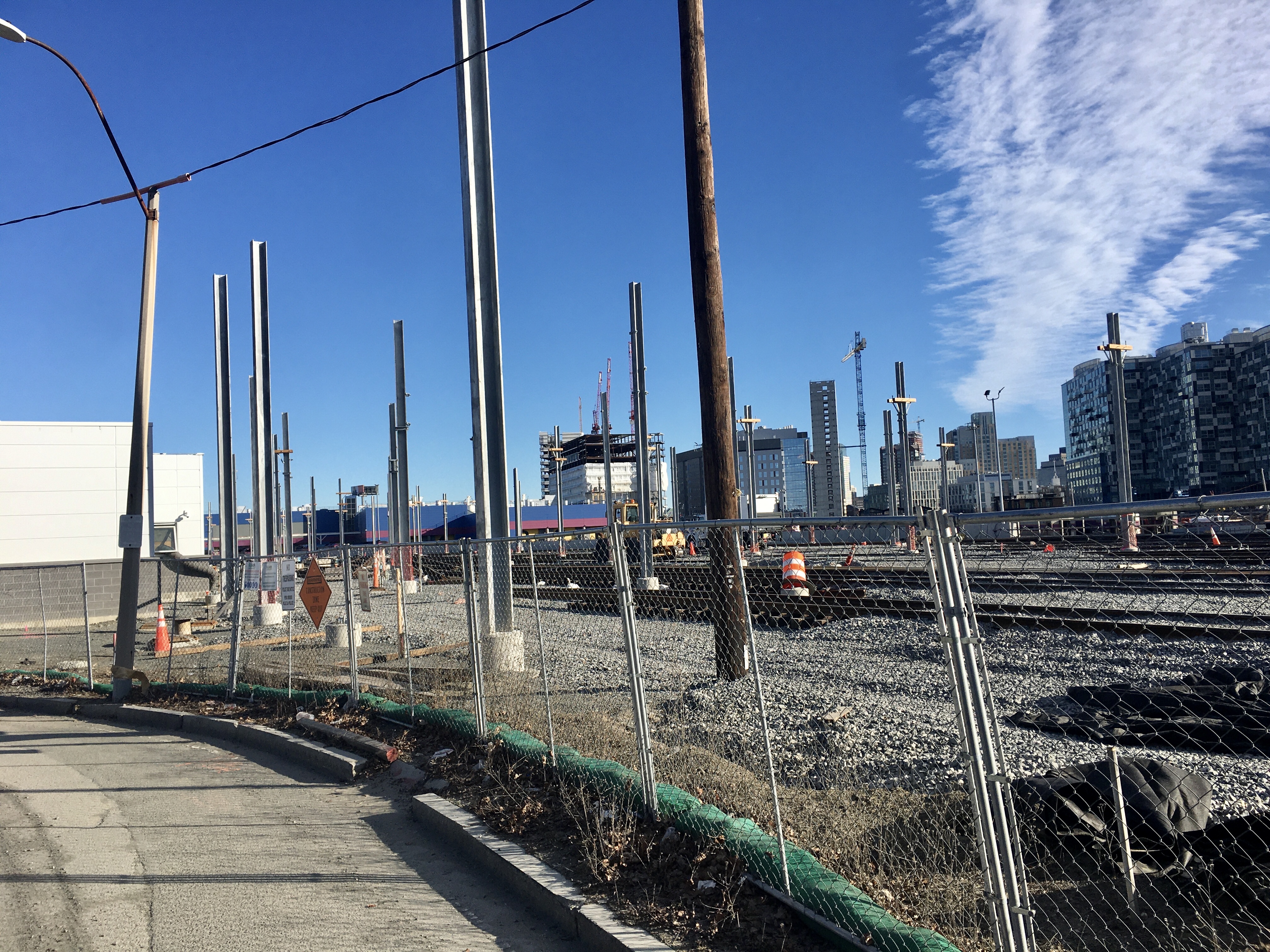 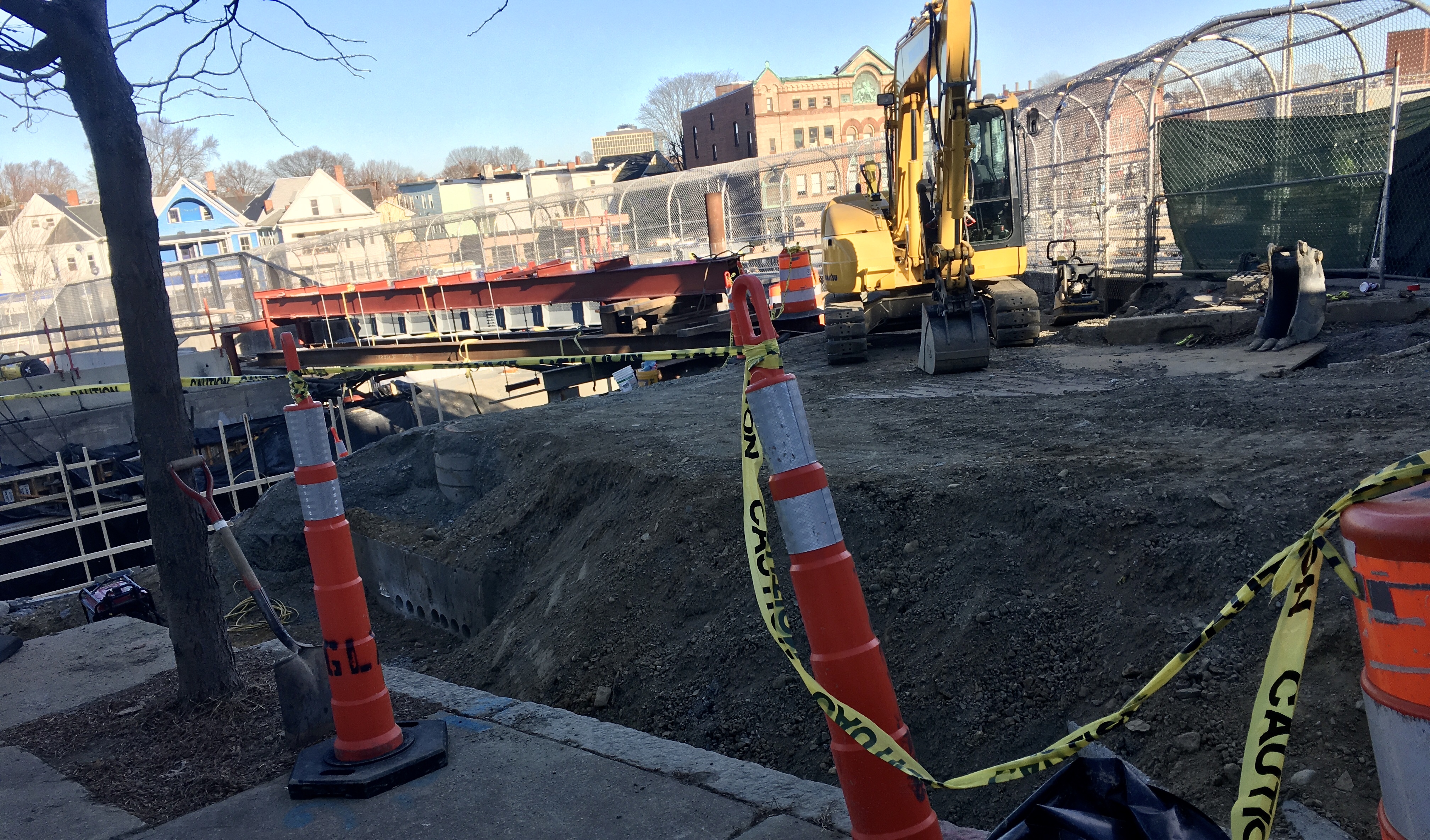 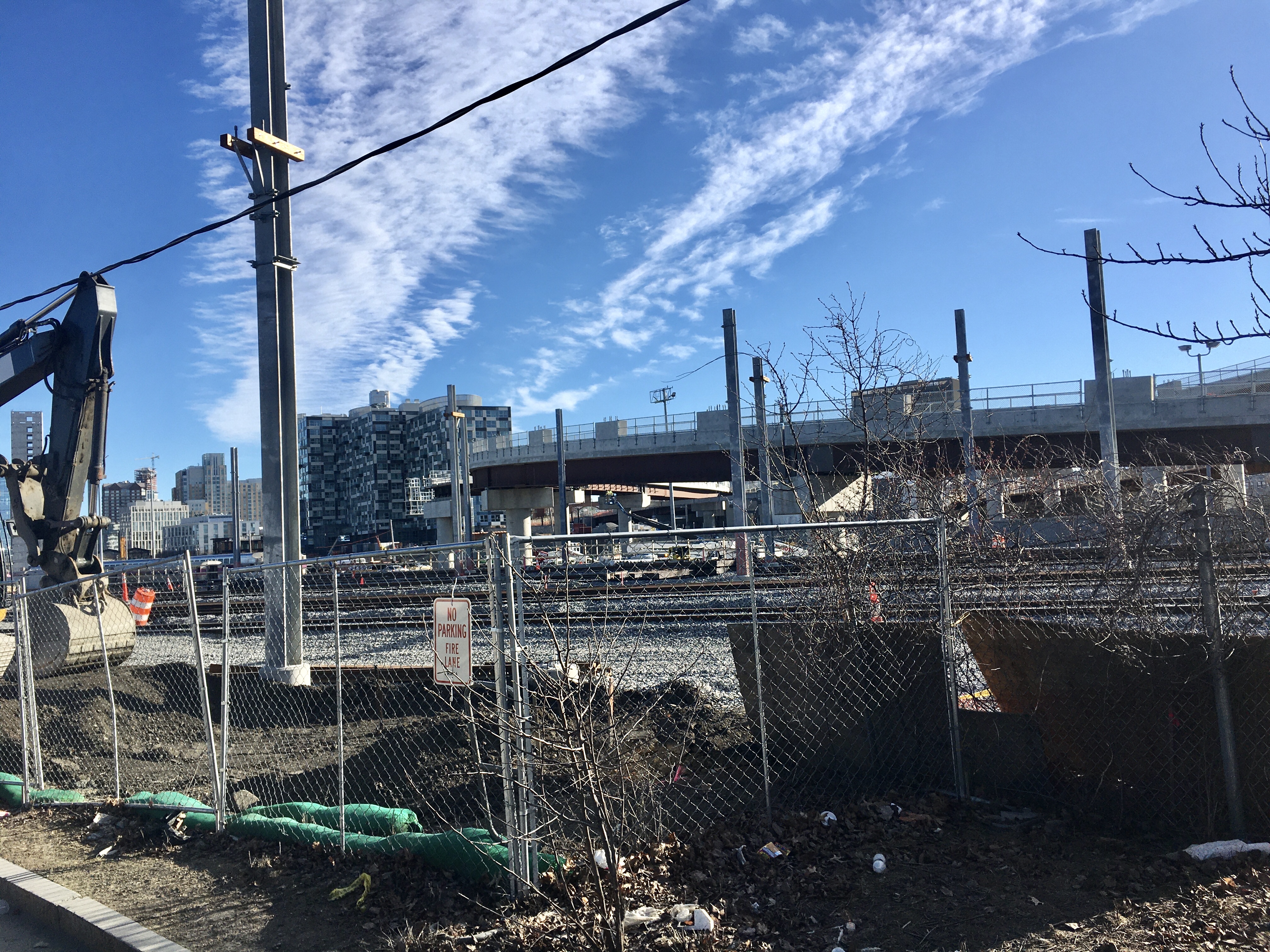 For historical purposes, that "third track" was called the Fourth Iron running from Mystic Jct to Somerville Jct (where the abandoned Freight Cutoff came in). After a 12/21/01 derailment of DOBO just
north of Walnut Street, Guilford never fixed it up and it went fallow from Walnut Street to Somerville Jct - never to be used again. This required all Guilford/Pan Am to use the handthrow crossover at
Walnut Street (which only connected the southbound or No.2 Track to the 4th Iron) all year in all kinds of weather instead of coming in and out on signals at Somerville Jct. And of course, this created
single track operations between Somerville Jct and Tower A for passenger trains when freights were active.
Click to expand... 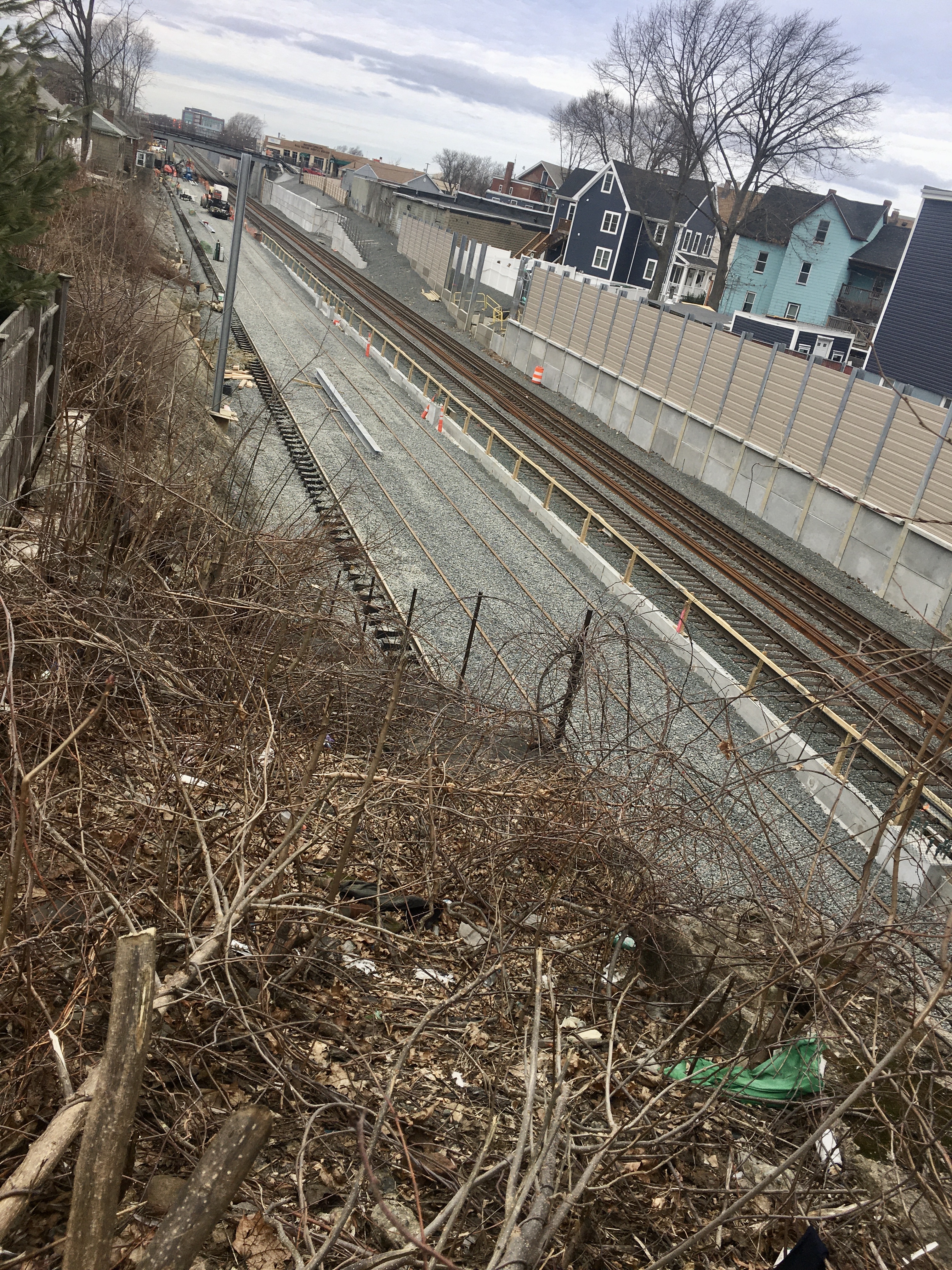 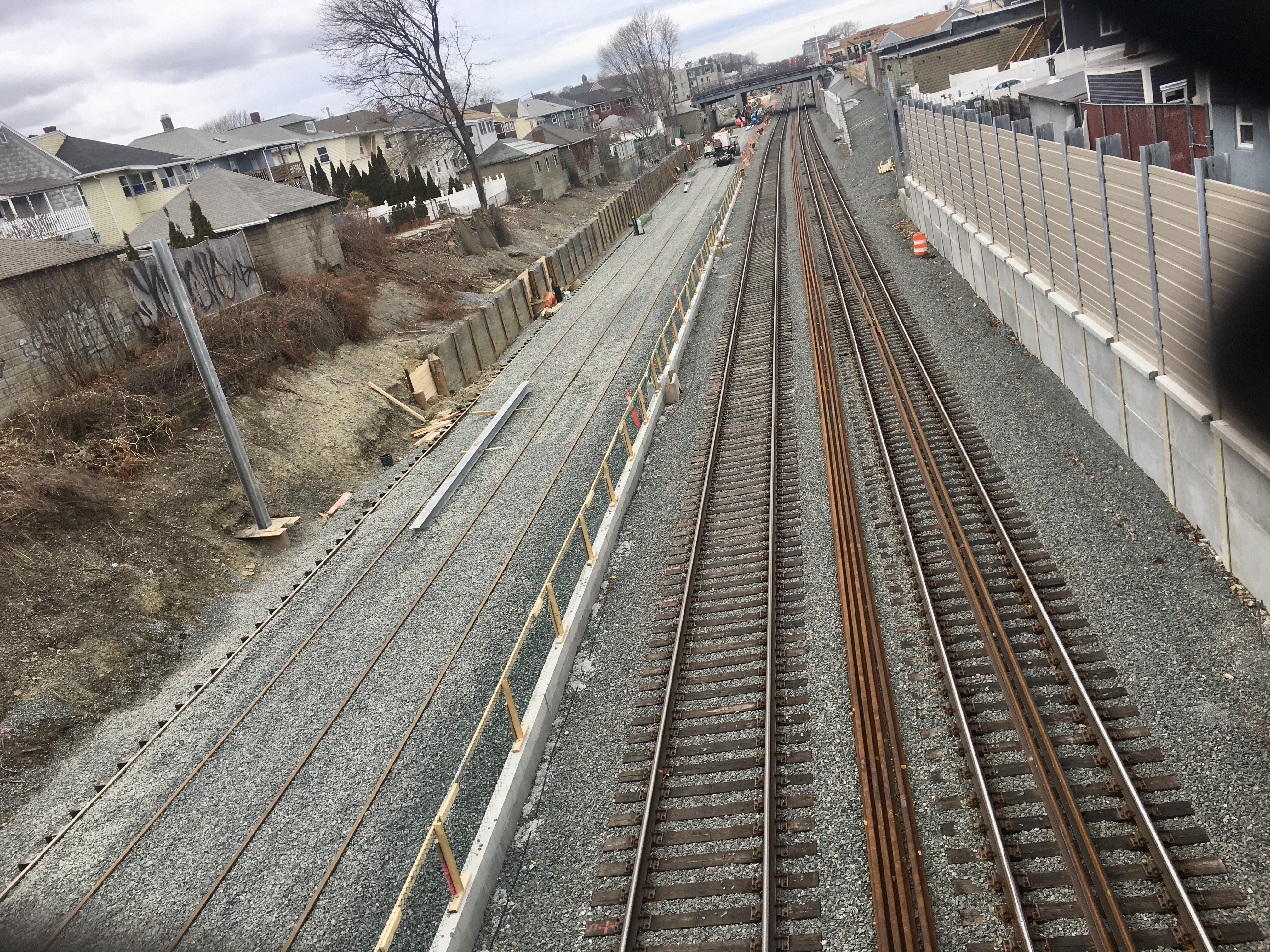 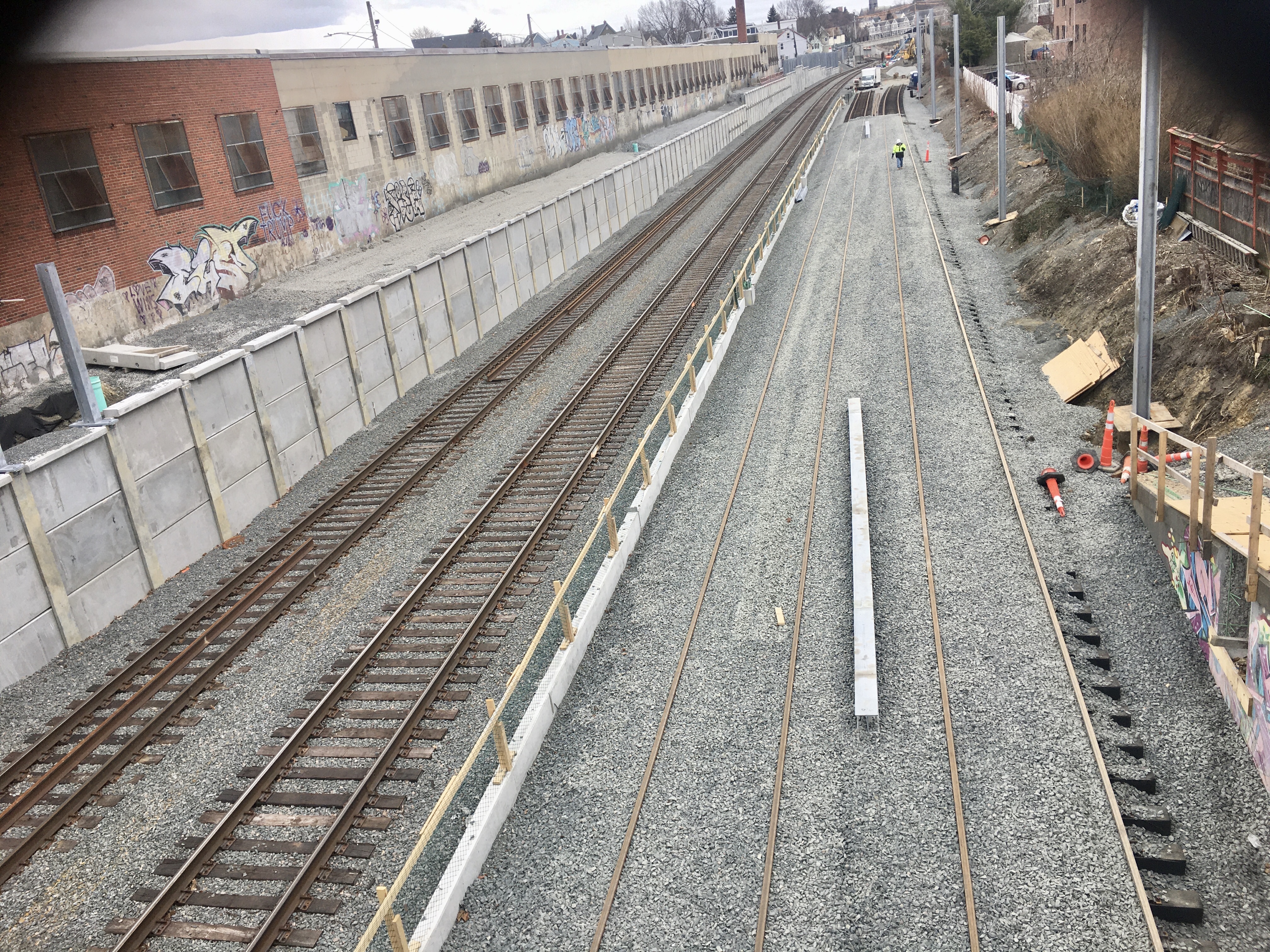 Wow! This is starting to look very real!

Looks like the tracks & support posts for the catinary wires have been installed part of the way!!!

What's the purpose of the low-rise concrete wall/curb between the commuter rail tracks and the Green Line?

Charlie_mta said:
What's the purpose of the low-rise concrete wall/curb between the commuter rail tracks and the Green Line?
Click to expand...

I'd guess it'll be topped by a fence whose purpose is to allow the two sides to be treated independently for worker-safety rules (CR won't have to slow if GL is being worked on and vice-versa). Ditto the CR not having to slow if people crossing the GL grades (on the GL side)
Last edited: Jan 26, 2021
J

Charlie_mta said:
What's the purpose of the low-rise concrete wall/curb between the commuter rail tracks and the Green Line?
Click to expand...

The CR and GL have different requirements for horizontal and vertical curves, as well as clearance under bridges, etc. I'm sure they tried keeping the adjacent lines as close in elevation to each other as possible, but curb walls inevitably were required.. especially considering the need for flat egress/maintenance walkways outside of the clearance envelopes.. so ballast couldn't simply be sloped between CR and GL.
R

A crash barrier, to prevent a derailment of one from impinging on the other, is also necessary.

I like all 3 answers so far:
1) Separating the corridors into independent safety zones (assumes fencing for passengers & workers)
2) Permitting ballast variances / superelevation / pitch variances
3) Catching the wheels of a train that's jumped into the ballast

I'm sure there are fence examples from the Orange Line in Boston as it has fences of various kinds between it and the NEC (southside) and the Haverhill (northside, at Oak Grove there's a hip-high one), but the one that came to mind is the chain link fence where DC Metro Red line runs between/alongside the CSX/MARC line: https://goo.gl/maps/wdwUzgETQPKbpqap9 (you'll also see that fence is wired with a "trip wire" at mid-height that, when broken "from either side", de-energizes the 3rd rail)
Last edited: Jan 27, 2021
J 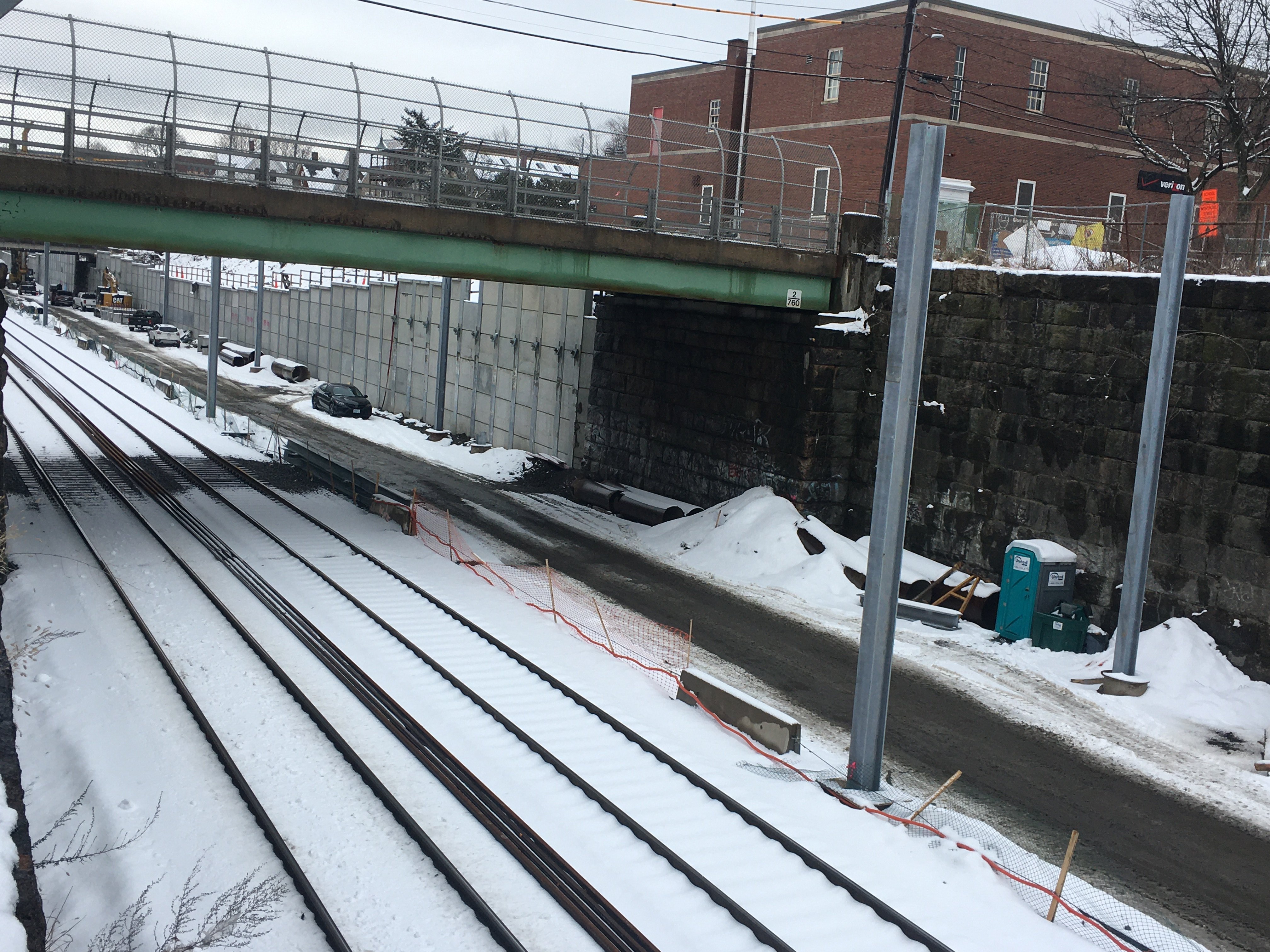 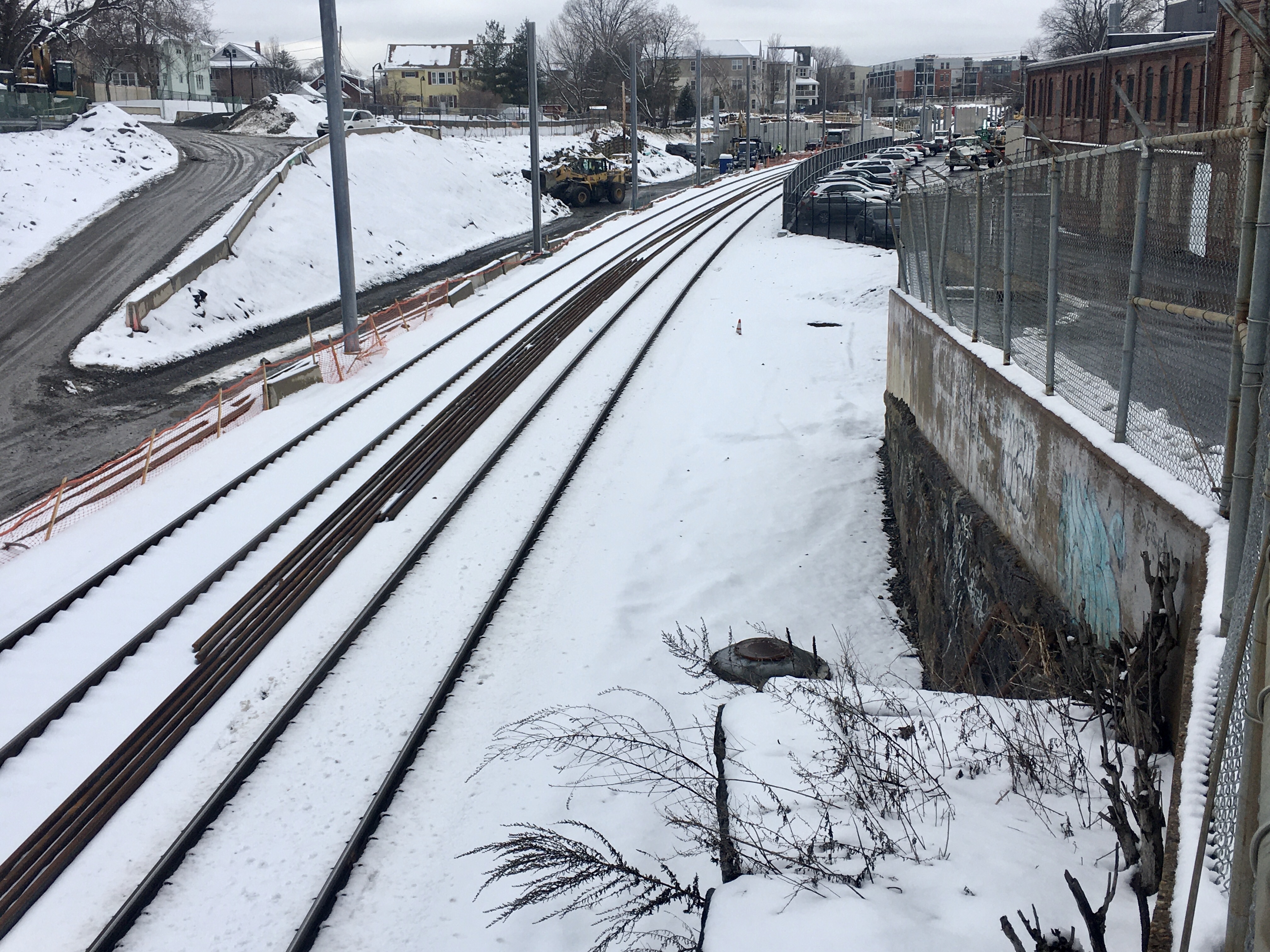 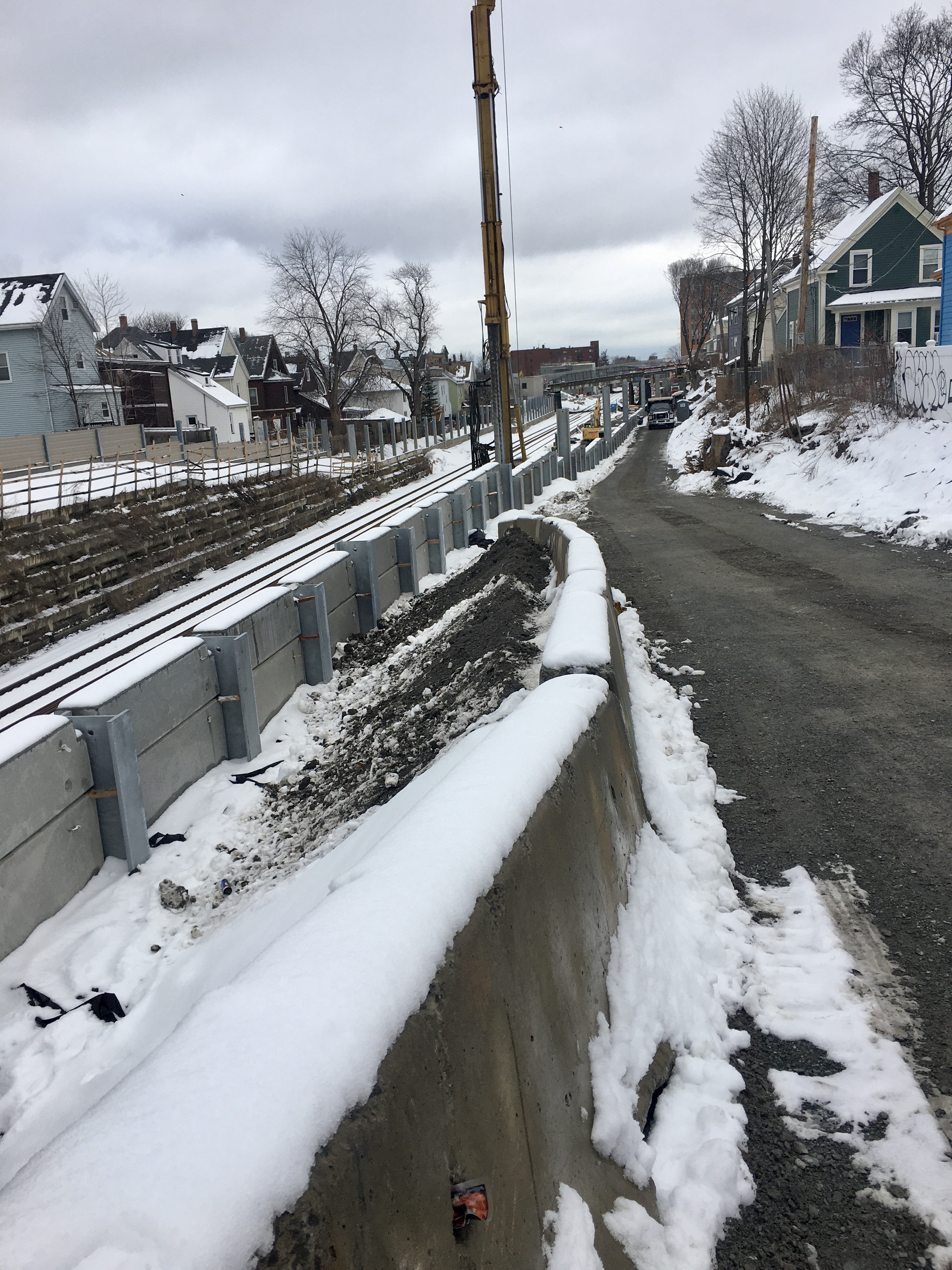 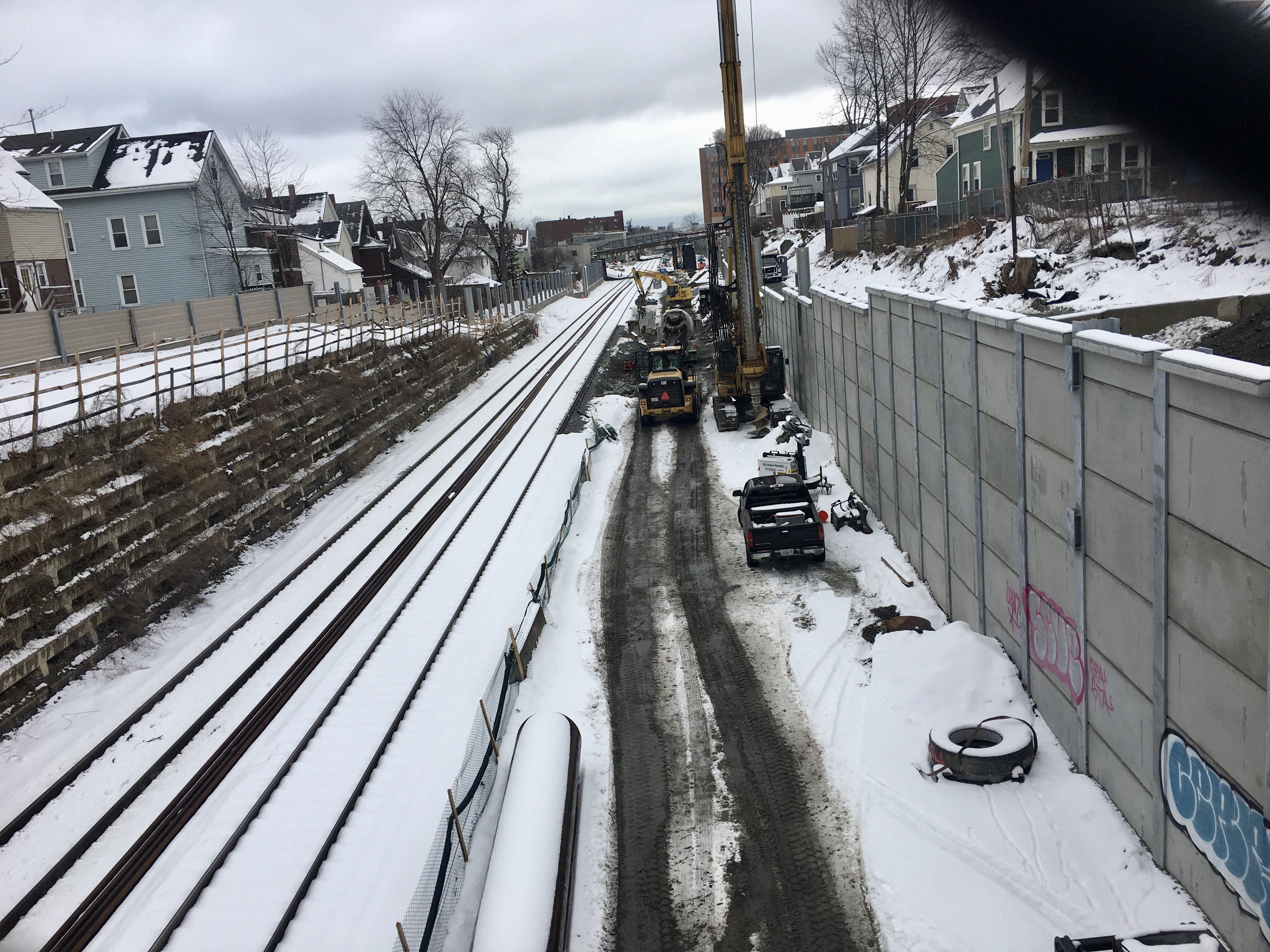 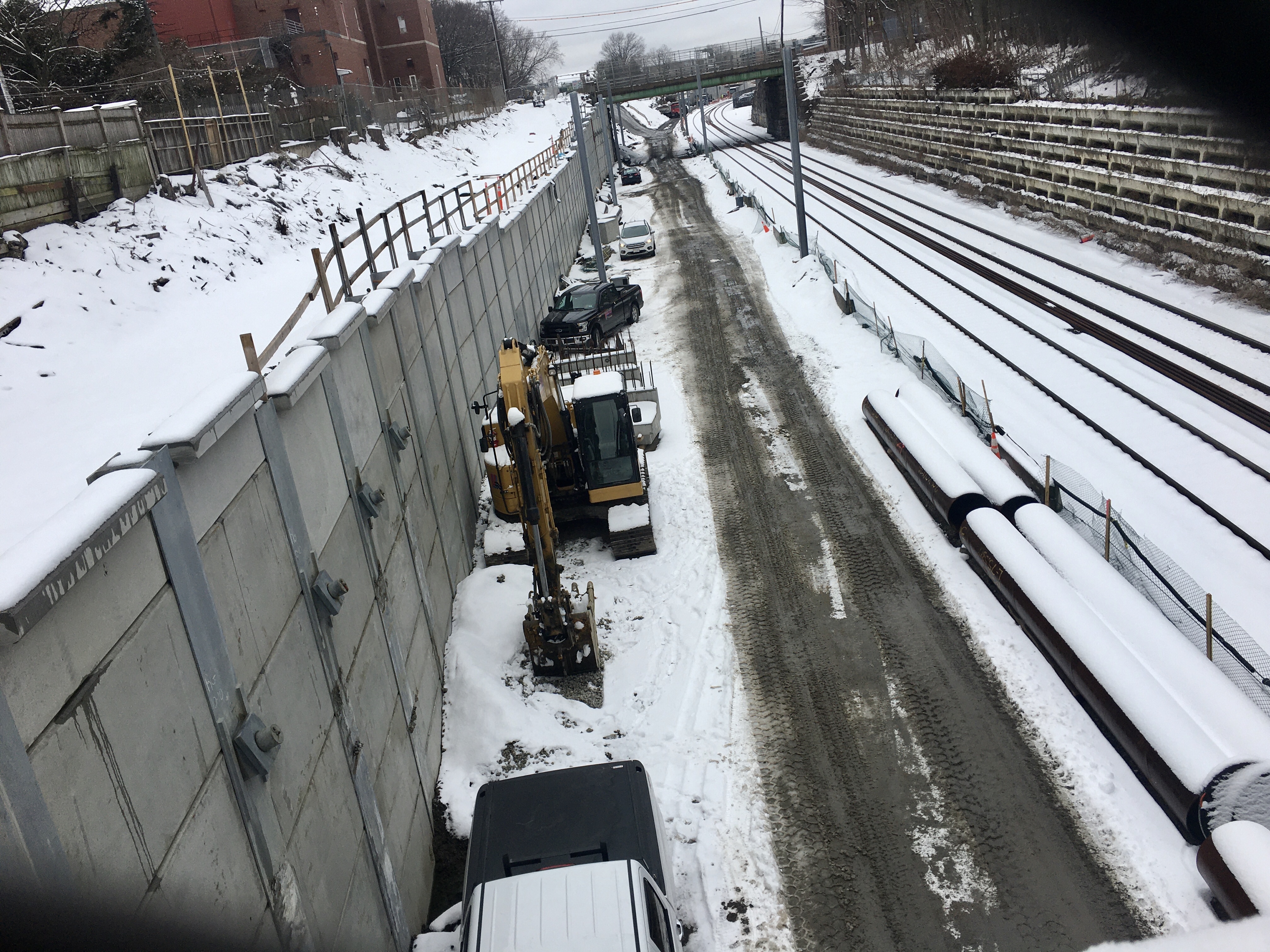 They already have graffiti on the retaining wall.

RandomWalk said:
They already have graffiti on the retaining wall.
Click to expand...

They need to install this type of graffiti eraser: