The GLX is going to open for use and the noise walls will still be incomplete.
F

Charlie_mta said:
Interesting how the Green Line tracks (in opposing directions) are a lot closer together than the CR tracks.
Click to expand...

Ruairi said:
why would they be replacing the rail on the CR side after just relocating those tracks?
Dont know much about rail, are the current rails temporary?
Click to expand...

Possibly. Could be the current tracks are re-lay (i.e. old/recycled) rail hastily spliced back together.
C

F-Line to Dudley said:
Or Brickbottom. Lots and lots of flatbed deliveries, though theoretically a shove up Riverside Jct. from the Worcester Line can do the job. In most cases replacement rapid transit welded rail comes in max 200 ft. ribbon chunks and more onsite welding is required for the installation to net an 800 ft. length. You simply can't turn a rail train longer than 200 through some of the curves.
Click to expand...

Is there to be a connection to the national rail network at Brickbottom, then? I can't imagine driving a rail train of any length through the Central Subway.

ceo said:
Is there to be a connection to the national rail network at Brickbottom, then? I can't imagine driving a rail train of any length through the Central Subway.
Click to expand...

The freight line railroad runs alongside the Green Line all along the new route. No need for a connection.
J

Javier said:
Why do they cover new line tracks with gravel and then removed most of it
Click to expand...

so that, where needed, the ballast can fall into place between the ties via gravity (and mechanical shaking). After enough has fallen/shaken/tamped between the ties, they sweep off the extra.
C

Charlie_mta said:
The freight line railroad runs alongside the Green Line all along the new route. No need for a connection.
Click to expand...

F-line indicated they'd have to run it up the actual Green Line tracks, because of the fence in between, and that they could do so at Brickbottom.
J

A lot of great information, Thanks guys
S

Those aren't OCS poles lying on the new ballast, right? I don't see any visible foundations for them on the inbound GL track side, but there's also too few for them to be for sound barrier walls, unless they haul the additional posts in as they install them?
F

Charlie_mta said:
The freight line railroad runs alongside the Green Line all along the new route. No need for a connection.
Click to expand...

Yeah...it would be side-loaded by crane over the fence.

Lift 200 ft. ribbon lengths off the freight car lash-up, plop it on the rapid transit flatcar lash-up. Take to the drop site, weld 4 ribbon lengths on the ground into a single 800 ft. length. Both GL + CR next-door at BET have rostered diesel crane cars for coordinating on the over-fence exchange. Not hard.
Last edited: Jan 15, 2021
F

Arlington said:
so that, where needed, the ballast can fall into place between the ties via gravity (and mechanical shaking). After enough has fallen/shaken/tamped between the ties, they sweep off the extra.
Click to expand...

They're also still running heavy construction trucks over the ROW, so need a more level gravel surface for time being.
J 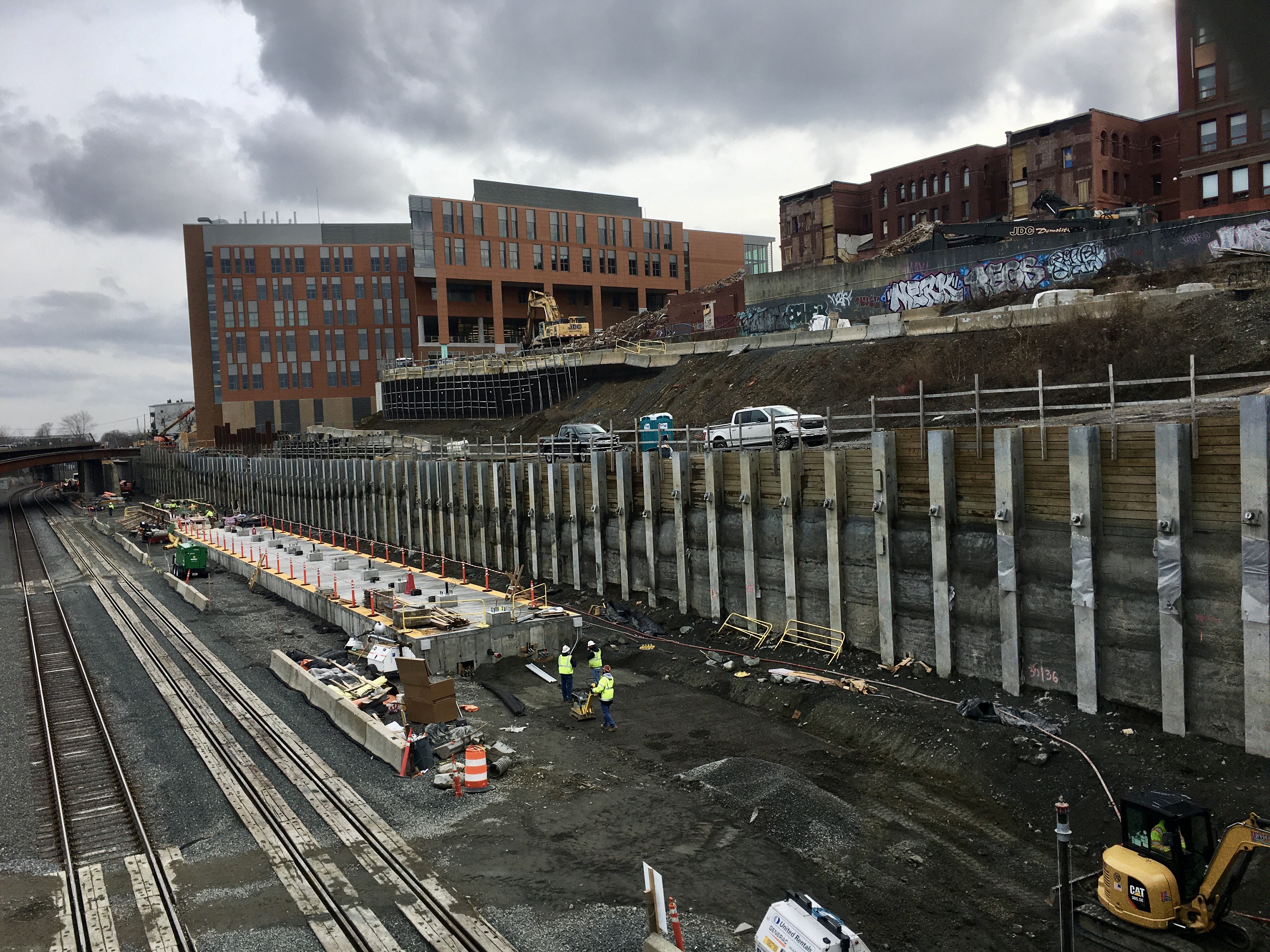 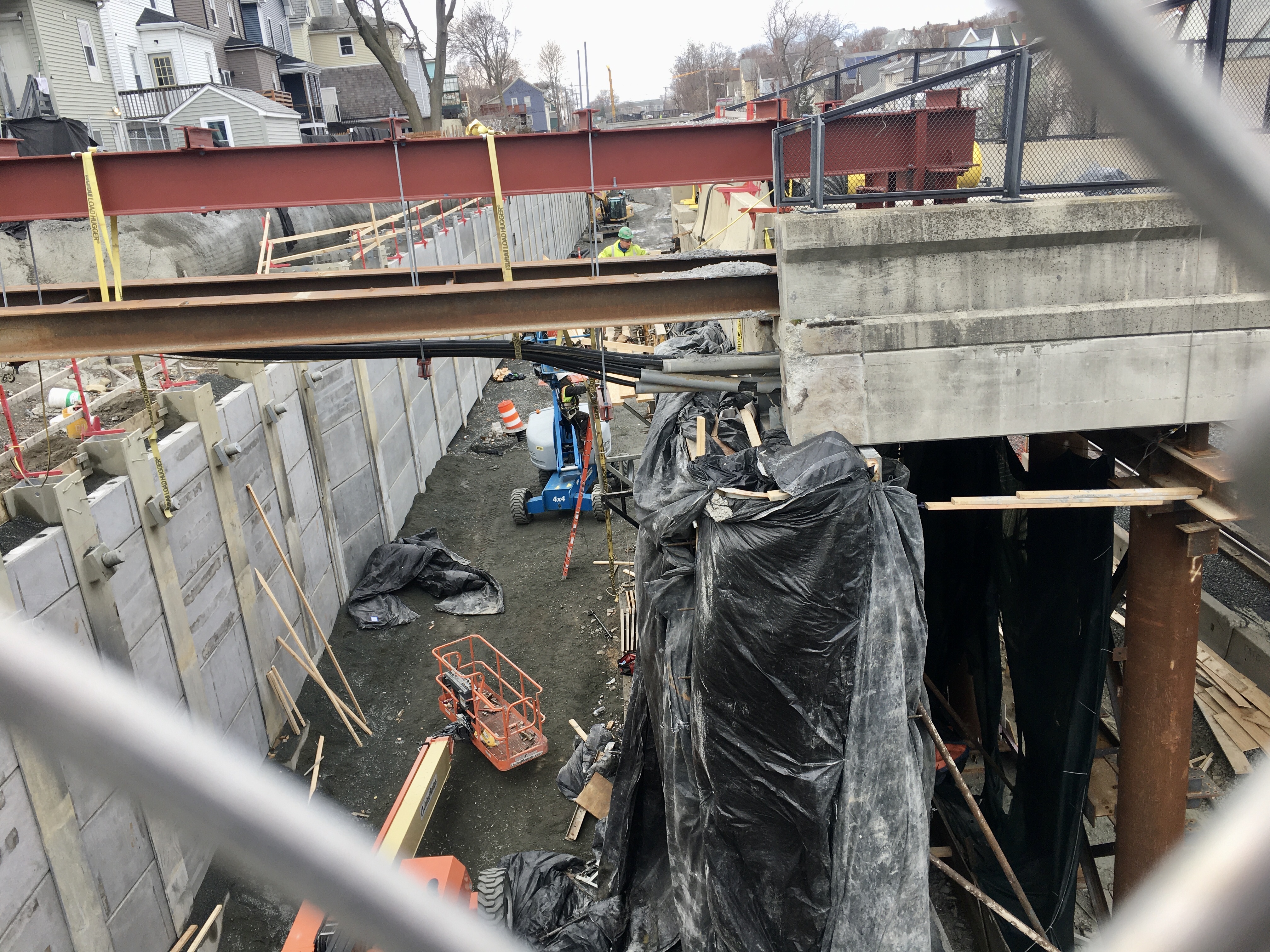 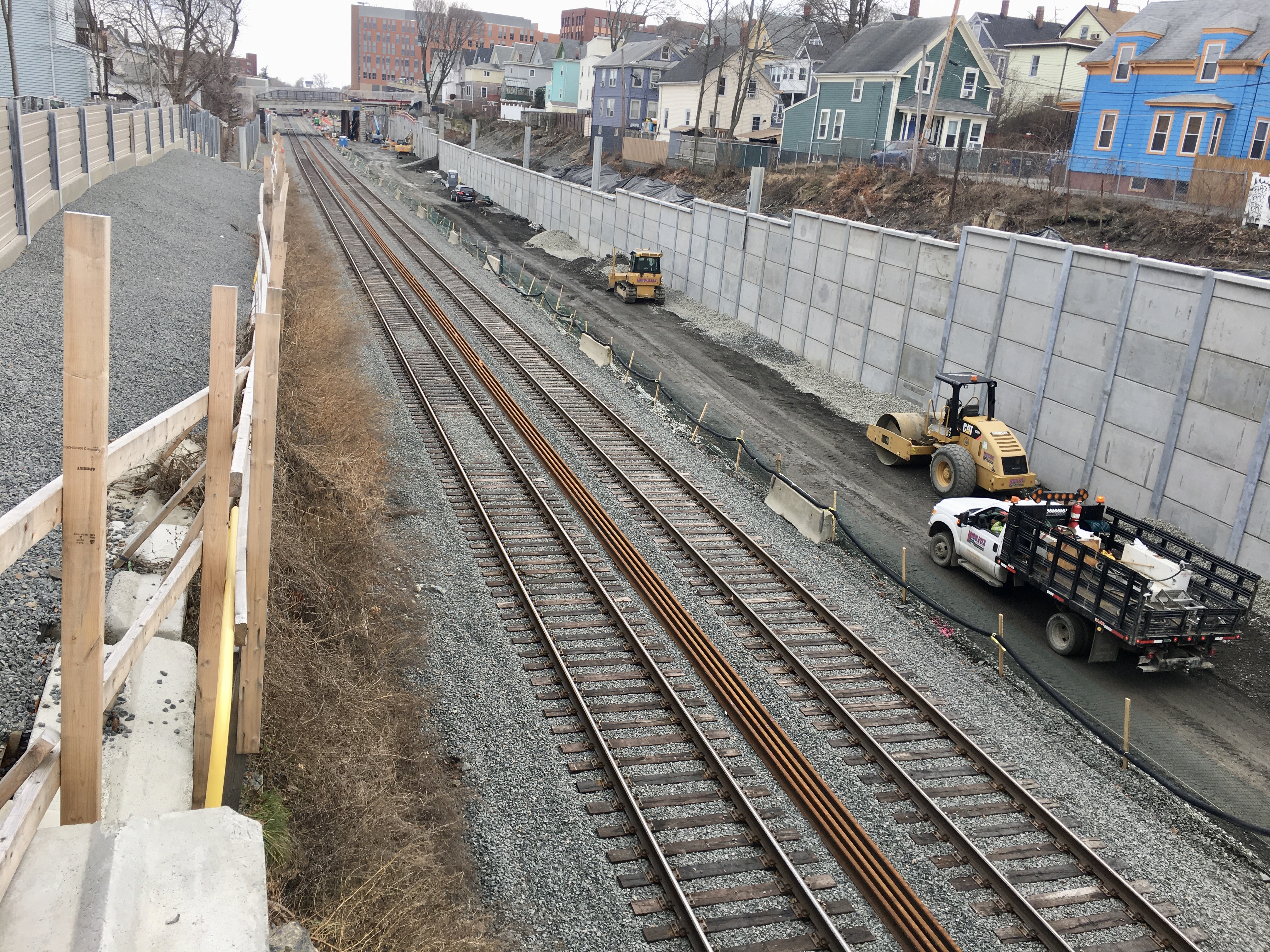 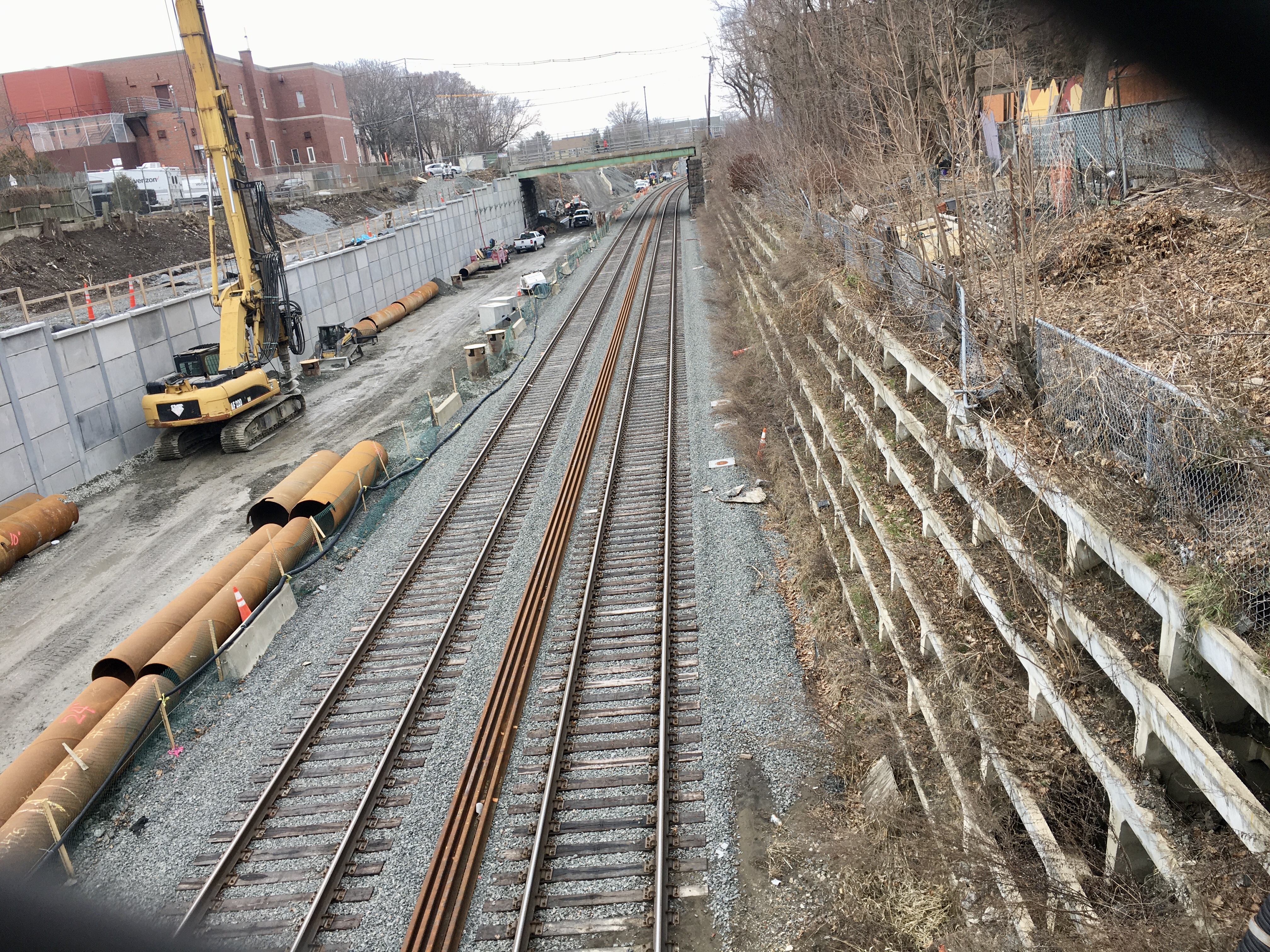 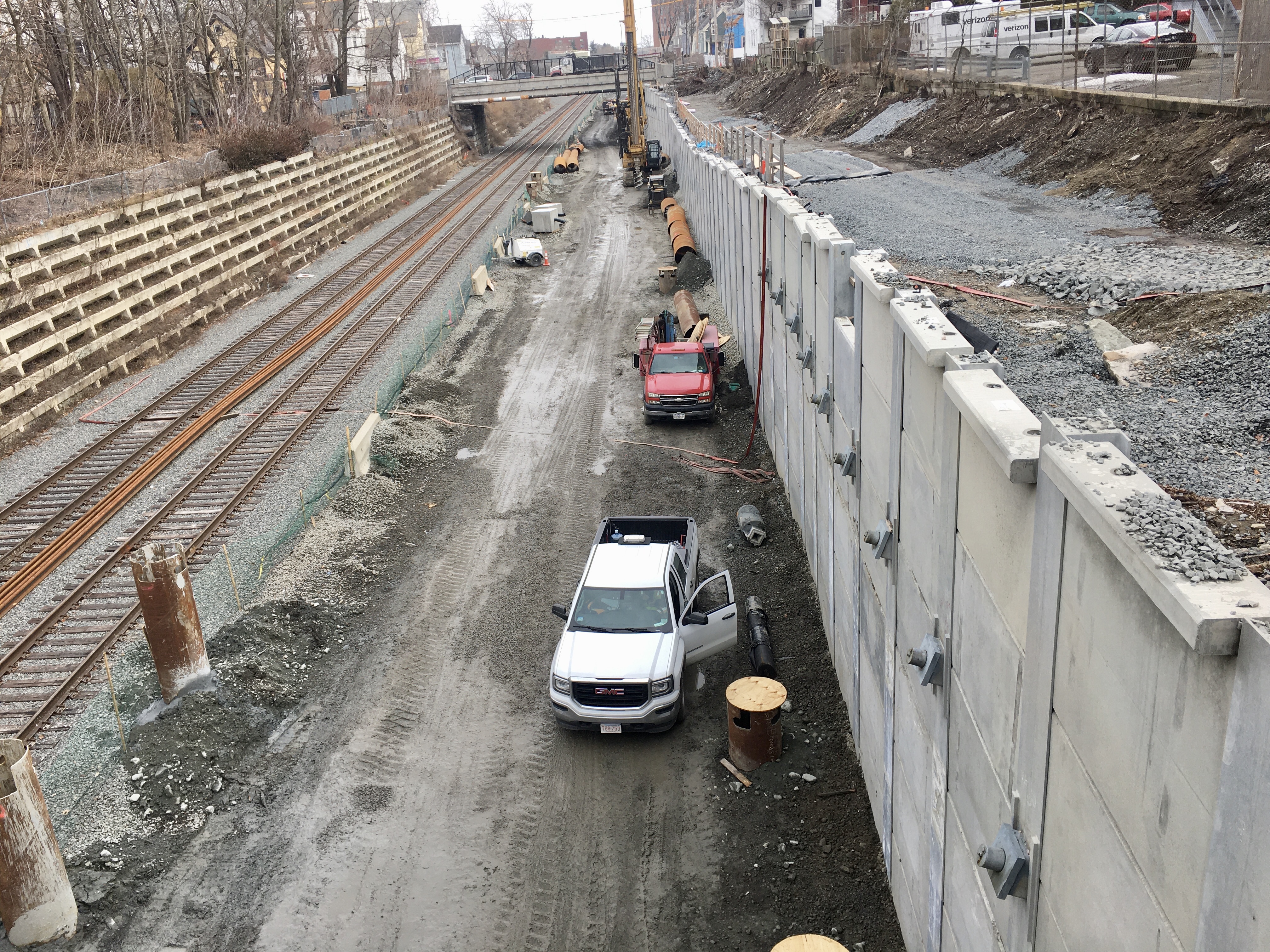 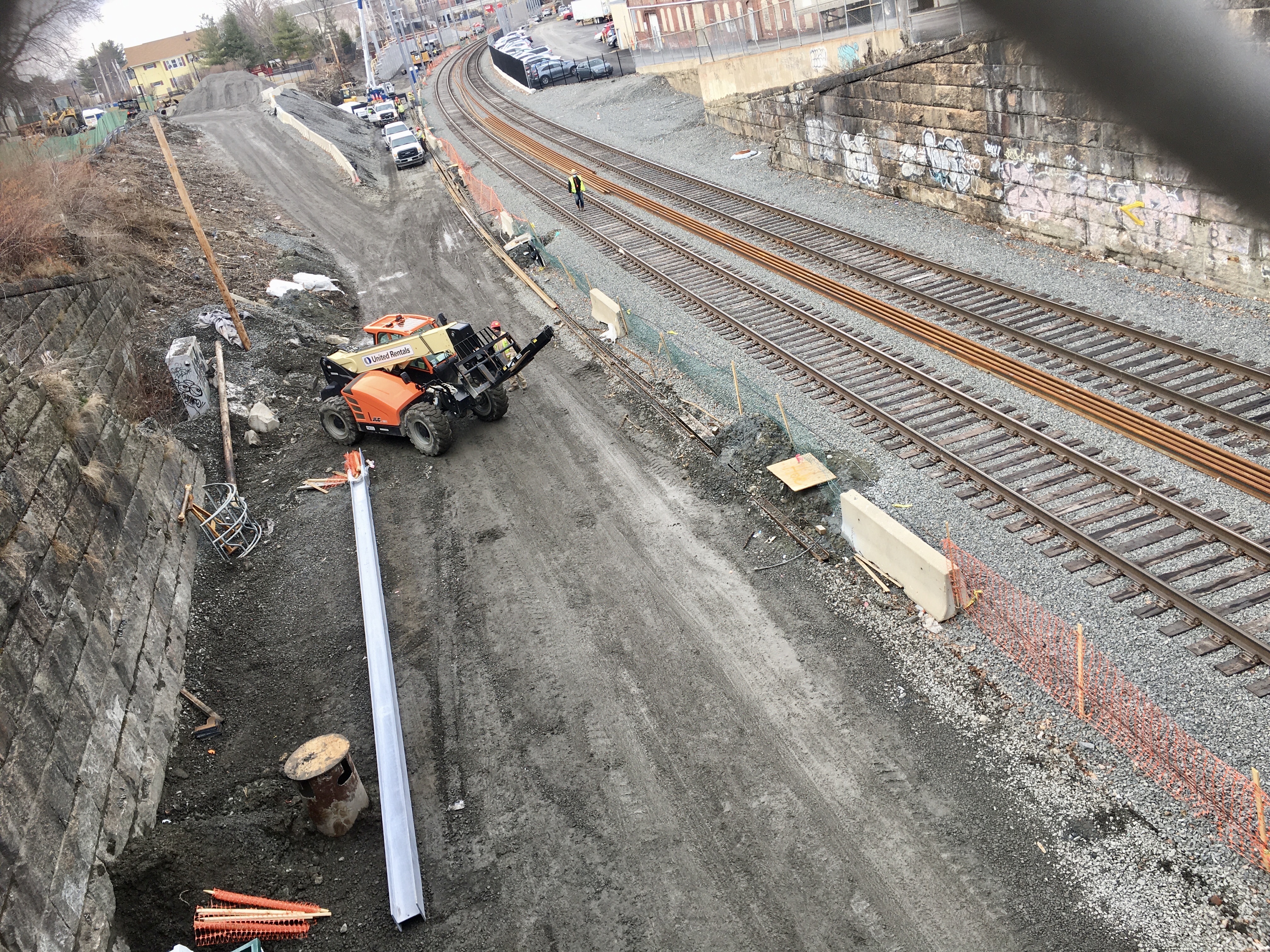 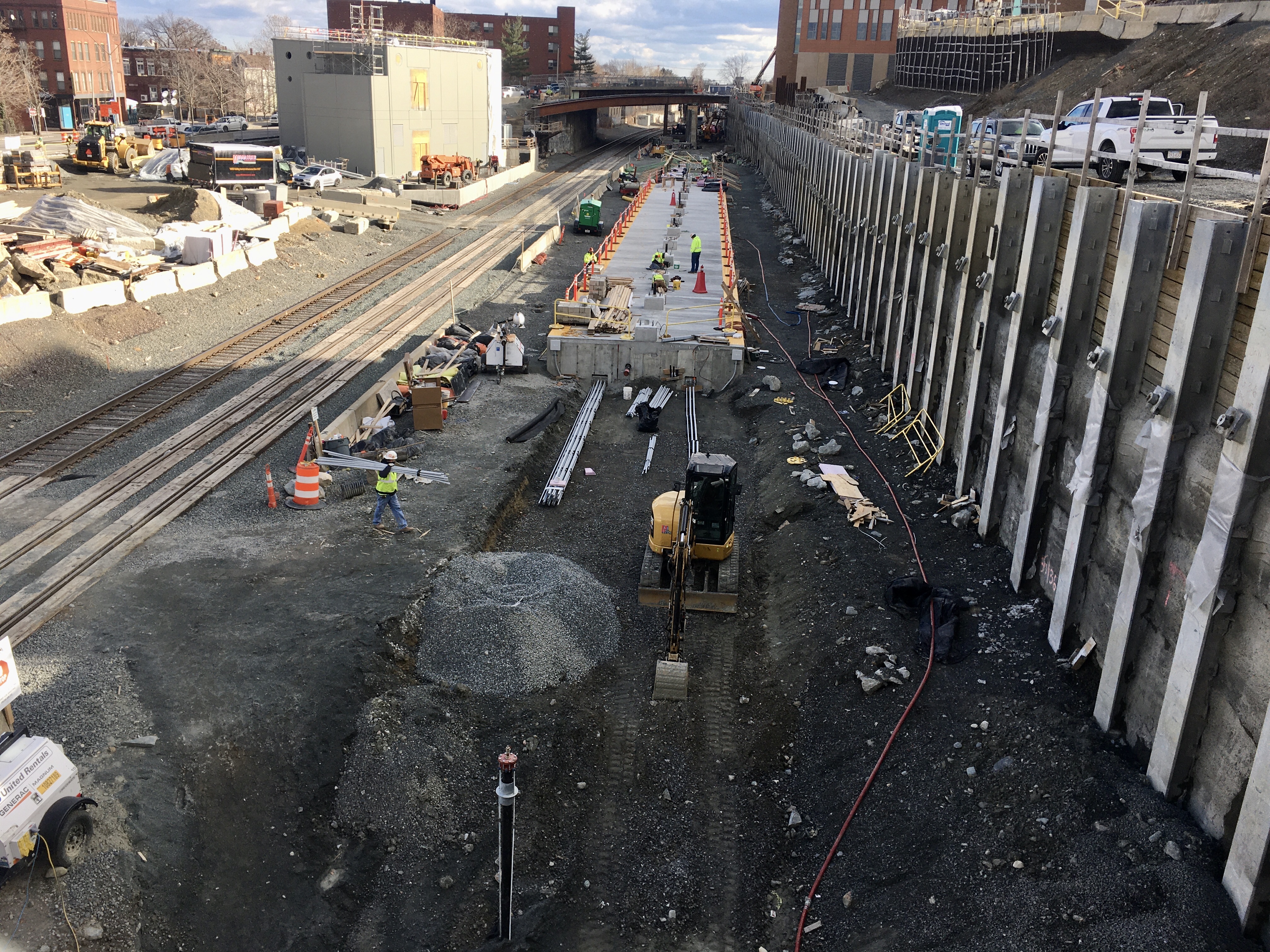 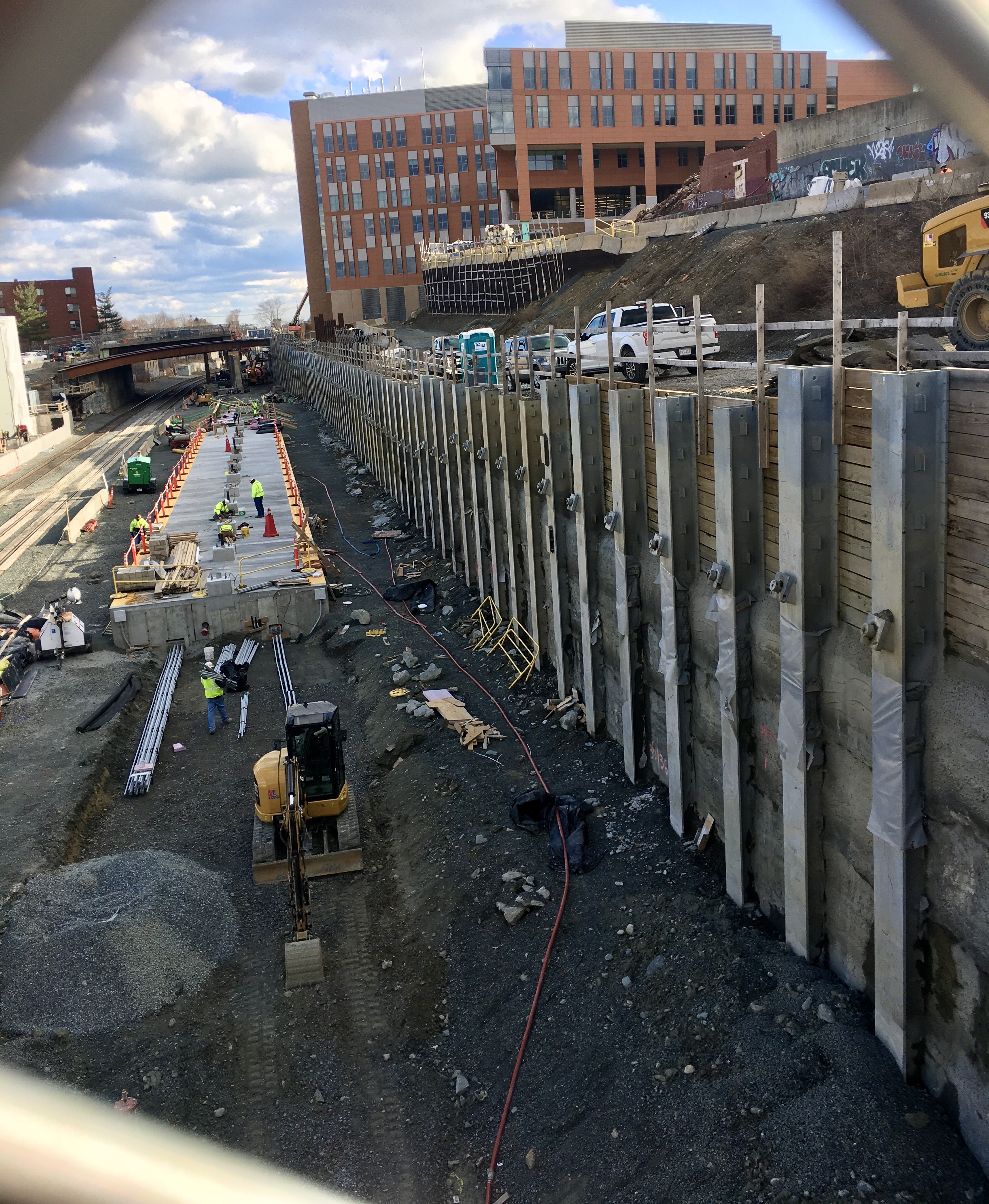 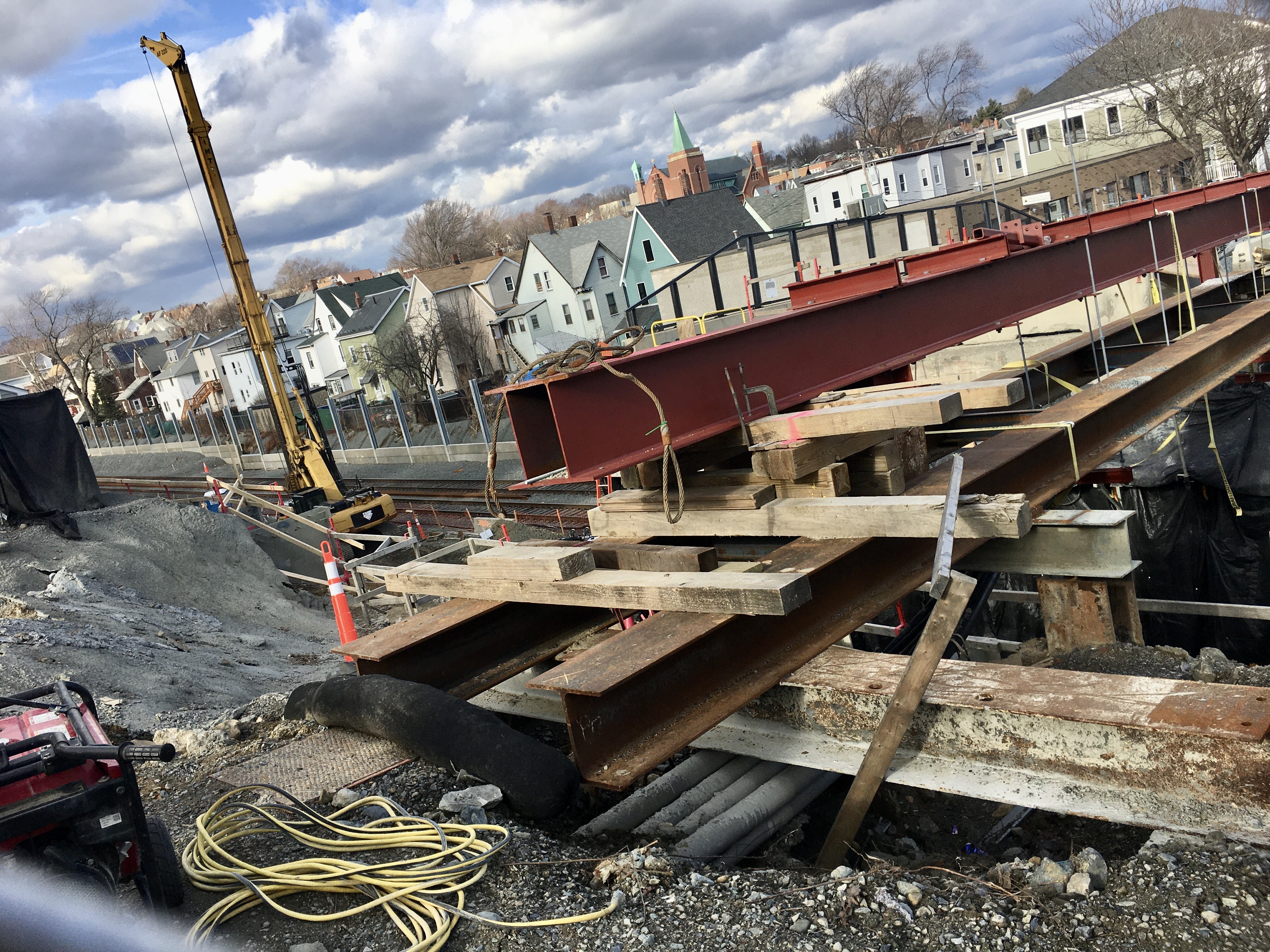 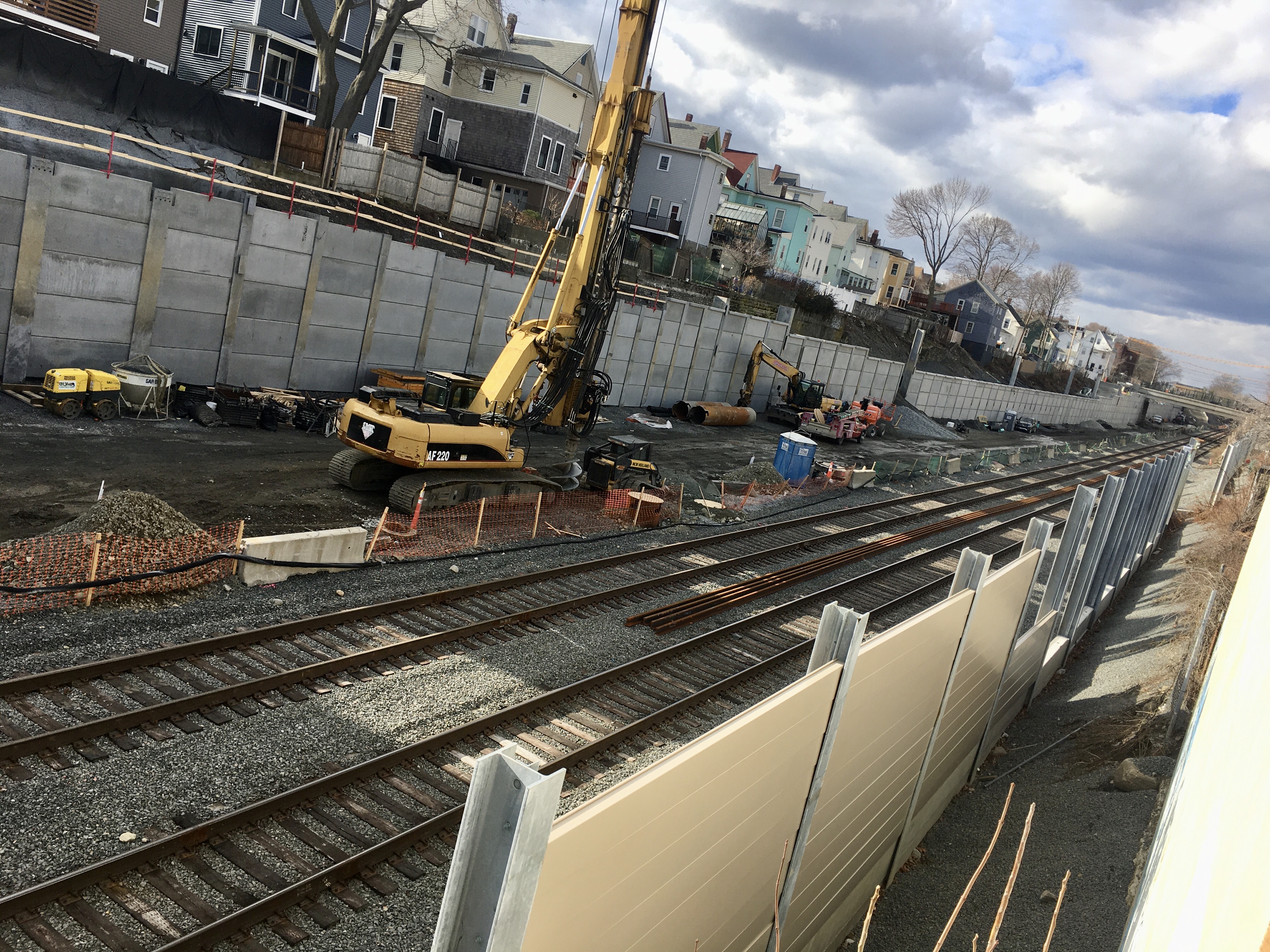 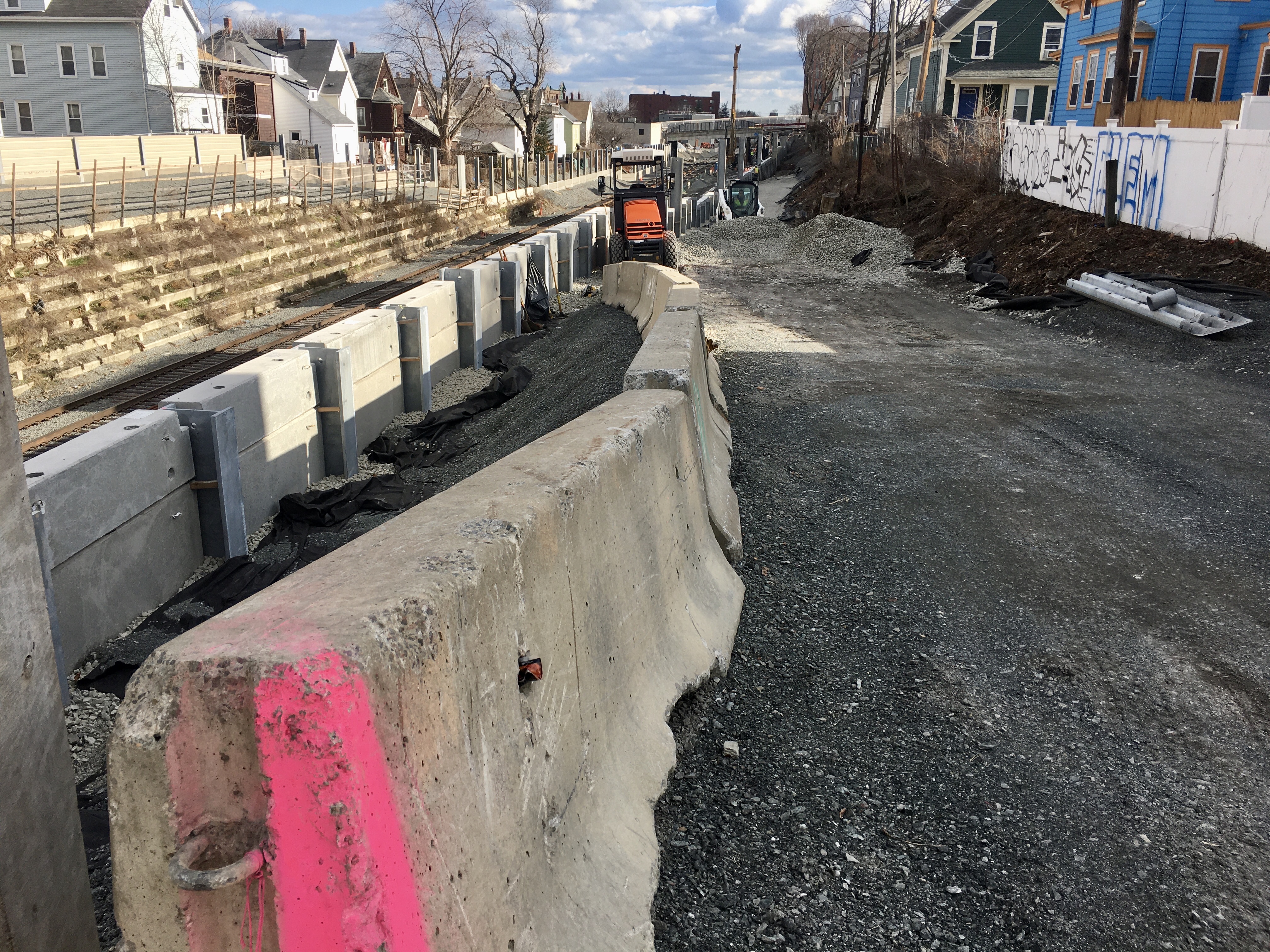 Your updates on the GLX are great. Can't thank you enough, Javier!
F

ceo said:
Is there to be a connection to the national rail network at Brickbottom, then? I can't imagine driving a rail train of any length through the Central Subway.
Click to expand...

Note that even though Green (Riverside Jct.) and Orange (Medford Jct.) have extant active connections to the RR network and Red an out-of-service one (via backup move from Track 61...RR switch temporarily spiked while the test track is in temp service), the differing wheel profiles of rapid transit vs. RR mean that work equipment isn't portable between the modes. Riverside Jct. changes from RR-profile rail grinding to trolley-profile rail grinding a few feet in from the Worcester Line switch where the rest of the spur was temporarily used as a Type 8 test track. You can shove materials cars at sub- 5 MPH speed from a freight or Commuter Rail work train off the mainline for purposes of reaching within a few feet of the switch into Riverside Yard-proper...but otherwise the derailment risk from incompatible wheels is too great to continue much further. Plus a locomotive won't clear the 600V trolley wires, so you can only take the freight train in so far from the back before rapid transit work equipment needs to reach across the switches and pull from the other direction to bring the loads the rest of the way into the yard. But even after making it into the trolley yard itself, the materials loads have to be completely transloaded off the RR cars onto work cars with rapid transit-ground wheelsets...because a freight gon or flatcar will never make it any distance down the D Line even at slow speed without derailing and quite likely taking out a cat pole in the process (nevermind surviving long enough on the tracks to reach a subway portal miles inbound).

Therefore, the only way materials transfers work is if you have already flatbedded in the rapid-transit wheeled equivalent of the rail train...then transloaded all the ribbon in the very back of Riverside yard. Same goes for any rental rapid transit work critters; all-flatbed (be it by highway wide-load truck or offloaded off a freight flatcar), no interlining. Hardly worth it, so Brickbottom doesn't have any planned track crossover to the adjacent freight tracks behind BET (though it would be simple to have one). Rather, the closeness of the freight running tracks to the GLX leads means that doing car-to-car side dumps or crane moves over the fence will be a much easier means of materials transfer between modes than shoving gingerly up Riverside Jct. If anything, maybe they plan a few lengths of temp-collapsible fence they can quickly move aside when they're doing side-transloads to streamline those jobs...but no need for an actual crossover with the microscopic odds it would be used for any reason within the first decade.


To my knowledge, the Orange Line switchback onto the Medford Branch hasn't been used at all since the 01200's were delivered by flatbed shove on B&M freights in 1980-81. Red's Track 61 switchback hasn't been used since the 01700's were delivered by flatbed shove on Conrail freights in 1987-88. Though with all the brush-clearing they've done on that track at Wellington it's perhaps decent likelihood that the 01200 dead line which will be stacked back-to-back on that track ends up getting carted off by Pan Am to Billerica for scrapping. Or perhaps loaded onto flatbed truck via makeshift gravel driveway to the Middlesex Ave. grade crossing as overhead bridge-free get outta town route.

Blue used to have a direct connection to the East Boston Branch at old Airport Station via crossover that went under a removable segment of chain-link fence; the 0600's were unloaded by flatbed from B&M in 1979-80 via that connection. It's been gone ever since the East Boston Branch to the docks was abandoned in the mid-90's for the Eastie Greenway, and thus there's no equivalent connection unless BLX-Lynn is built. But that one was like its HRT counterparts on Orange and Red at literally never being used more than once a generation. Riverside Jct. on Green at least has gotten recorded use in the last decade for materials swaps...if little else, and virtually nothing on any halfway annual basis.
S

The Viaduct crane is slightly active this afternoon:

The School Street pedestrian bridge closed today. I assume it’s finally time to demolish it for the new head house.

^ Yes I saw an announcement to that effect in one of the related facebook groups: the temp ped bridge is being removed to permit final construction of that 15' segment of the road bridge that is missing in all of Javier's pictures of Gilman.
Last edited: Jan 19, 2021
R