Groundbreaking will be held on Friday, Mar. 7, 2008 for a new building to house the Koch Institute for Integrative Cancer Research, which will bring together scientists from the Center for Cancer Research and other research groups. The building will be located on Main Street between Building 32 and Building 68 and will be completed in December 2010.

The building will be seven stories tall, according to James May ?83, senior project manager at the Department of Facilities. It will have a footprint of 45,000 square feet and offer a total of 365,000 square feet of space, including space in the basement and in a penthouse, May said.

Floors two through seven will consist only of research laboratories, according to May. ?The first floor will have headquarters space, as well as additional labs,? May said. A total of 25 principal researchers will have laboratories in the building, and there will be some shared laboratory space, May said. The faculty members who will occupy the new building will come from the CCR and other departments such as Biological Engineering, Chemical Engineering, and Electrical Engineering and Computer Science, according to Associate Provost Lorna Gibson.

May said that one reason for the choice of the building?s location is its ?proximity to similar institutions.? The Broad Institute, Whitehead Institute, Biology and Brain and Cognitive Science buildings are all next to the proposed site. May said that there is ?strong synergy? between researchers in these buildings.

Arne Abramson MCP ?82, program manager at the Department of Facilities, said that MIT will be landscaping the building?s entrance on Main Street in connection to the construction to ?define MIT?s face on Main Street.? Abramson said that the project will be ?extending the Infinite Tunnel Network? by connecting the Koch Institute for Integrative Cancer Research to Buildings 32 and 68 via underground tunnels. According to Abramson, it will take ?five or six weeks to move [all the occupants of the building] in.?

The CCR currently occupies space in Buildings E17 and E18, according to Gibson. ?We haven?t decided what E17 and E18 will be used for? after the CCR moves into the Koch Institute for Integrative Cancer Research, Gibson said.

$100 million of the $240 million needed for the construction of the building will be provided by David Koch ?62. ?Koch has a long-standing interest in biomedical research,? Gibson said.

Gibson said that there were regular meetings with faculty during the planning and design of the building. ?We started meeting with the architects [Ellenzweig] in December 2006,? Gibson said. Ellenzweig, a local architecture firm, designed the Tang Auditorium in 1992 and renovated Buildings 16 and 56 in the late 90?s.

The parking lot currently located on the construction site will stay open until Apr. 1, according to May. ?That parking lot is no longer going to exist,? and will be replaced by parking space in the new Sloan building, Gibson said. Gibson said that people who park at the proposed site have started using the parking lots in the basement of Stata.

The food trucks on the proposed location will be moved at the end of March to Carlton Street, next to the MIT Medical building, according to Gibson.
Click to expand...

Is MIT intent on turning East Cambridge into the dull DC of science?

Hasn't it always been that though?
S

As for dull, you get to stare at Stata the whole day long.

That new quad is currently a parking lot, right?

Hasn't it always been that though?
Click to expand...

Did I imply otherwise? This building just carries on their plans...

I like the amphitheatre being added into the mix, for all those masked Cretan tragedies being performed amid the research labs, no doubt.

I believe that water problems with the the design and construction of the amphitheatre are the focus of MIT's lawsuit against Gehry.

The grammar and materials of this new building seem to reflect an affinity with the Correa building across the street. Next to Stata, it's "calming" in its lack of imagination.

It looks like a heavily sedated version of their Brain and Cognitive Science Center.

That's funny, Brut. I didnt see your post until after I posted, but we essentially said the same thing. We must be on to something.
W

What about parking for events at MIT?

But MIT had a couple of Nice BIG LOTs along Main St. ? they were very useful for unofficial parking as well as event parking

However -- now they are now going to be buildings

So if one wants to attend a function at MIT and is not the beneficiary of an MIT garage parking pass and can?t depend on the T -- there will shortly be no parking adjacent to the Main MIT Campus

I don't see why it is needed. The Red Line station is right there.
W

Just as I wrote about Museums in the Greenway thread -- MIT and the other great research universities host a multitude of events for the local and not so local technical communities.

Not all of them can or will come by means of the T. Generally these folks are wanted at MIT -- such as the annual breakfast with the Physics Department -- who primary stated purpose is to update alumni and friends with what is the state-of-the-art in Physics topics

BUT -- whose unstated purpose is to collect $ from current and possible donors. In the past the parking was "unofficial" in the Sloan or Koch building sites when they were still lots

There are a few pay garages in the area, such as at One Broadway.
P

Koch on March 30. Excavation and shoring has started.

The north side of Stata is going to be blocked from view.

Building 76, the new home of the Koch Institute, will feature roughly 180,000 square feet of state-of-the-art lab and workspace. The floor plans are specially designed to foster interaction and collaboration among biologists and engineers ? both in terms of dedicated lab space and in the common areas, where informal talks will lead to new collaborations and spontaneous information-sharing. Together, our diverse faculty members will create a new culture of interdisciplinary cancer science.

In addition to lab and meeting space, the building will feature a ground-floor exhibit gallery that will be home to a changing display of art and information on MIT's leadership role in life sciences. 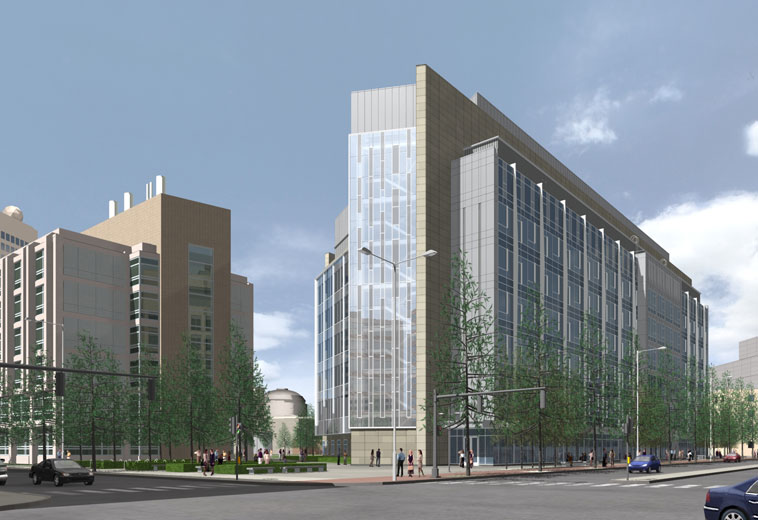 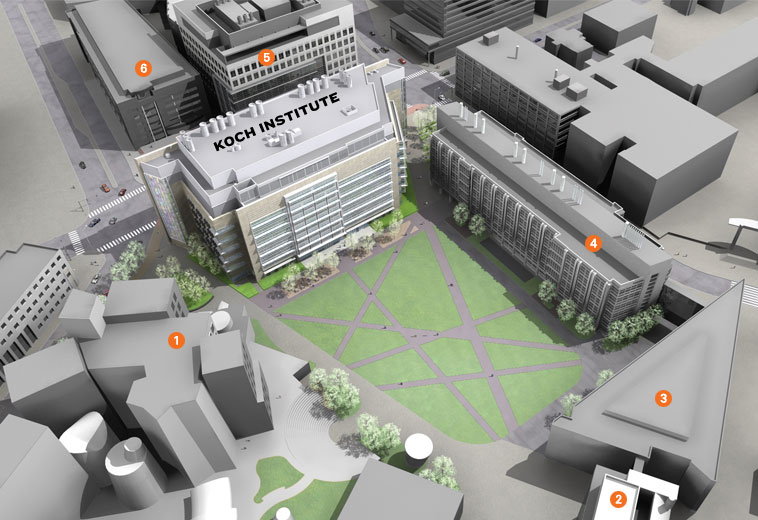 Luckily i work in the building across the street, so I can see the construction REALLY well! They are currently excavating, here are some photos from my office:

Good looking building...thanks for the photos. Will you loose completely your current view of the Stata?