HelloBostonHi said:
Yeah so I have no clue what phase this is, is this a stop gap measure before the full transition in two years? Will these be compatible with the new system or will they be replaced again? Why only 50% of the gates? What is a "tappable charlieticket" and when did that become part of this?
Click to expand...

Apparently, pilot of upgraded gates and readers is phase 1 and 2, 2020/2021. Charliecard vending is part of phase 2 as well, which I suspect also enables tappable tickets. I'm fairly sure tappable charlie tickets are part of the AFC 2.0 reboot as a consequence of phasing. The original proposal was Charlie card, contactless bank card, or mobile only, and I believe the Cubic equipment won't have mag stripe read capabilities. As the alternative "Online" payment methods are only scheduled to come online with phase 4, 2023, likely including QR based, some form of "offline" single use ticket was probably deemed critical. While a QR code based single use ticket is probably better in the long run, in the interim the offline S&B system probably can't support it, hence tapable tickets. I wouldn't be hugely surprised if they disappeared after a few years, as the T's long term goal is no single use fare media. But, I also believe there was community pushback, as there are people who still don't and won't have access to those services; the unbanked, homeless, etc, so some form of single fare tickets will likely always be around.

As to why 50%, I'm almost certain it's because of transition and interoperability reasons. You want people to be able to get in during the switchover, so some legacy gates need to remain active for some while, since they're not going for a big bang anymore. So when they do install the Cubic system and remove the S&B, they'll replace the old, unupgraded half first, so that 50% of faregates eventually are "Legacy+ interoperable S&B" and 50% Cubic. Plus, you want the fare media to work on both the old gates and the new Cubic gates when they exist side by side. The tech is different enough that you need the new readers, that can do NFC mobile pay, tap credit cards and all that. The Payment Card Industry standards they reference are the collective group that set data security standards for Visa, Mastercard, JCB, etc, which implies these gates will be contactless ready.
Last edited: Oct 3, 2020

A very small detail, but I'm curious how they'll deal with one of my favorite oddities on the system: the Radford Lane entrance to Ashmont station, with its single faregate. I think it's the only single-faregate entrance on the entire system. (Was there an entrance from Radford Lane before the circa-2010 renovation?) 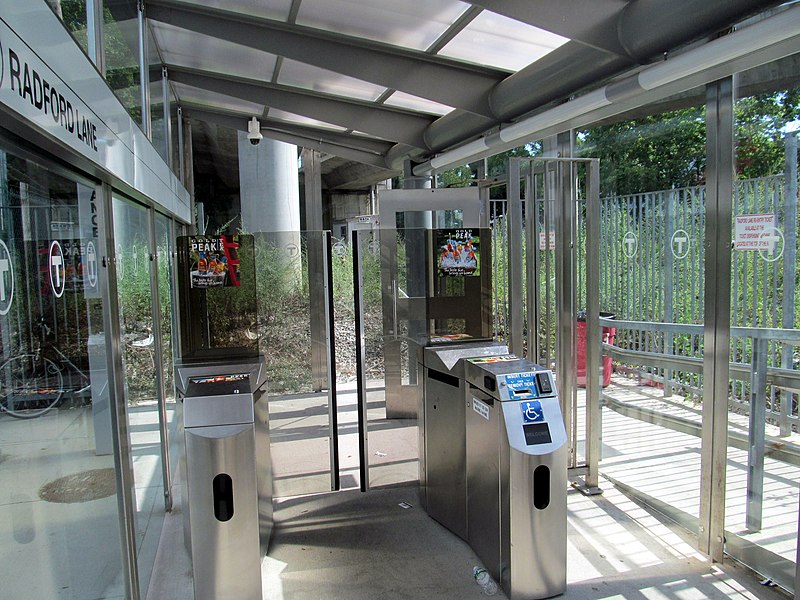