stick n move said:
Thanks for the detailed answers! One more question, why would they want to get rid of the overhead catenary on blue? It seems that the majority of new heavy rail transit systems being built today are opting for overhead catenary vs 3rd rail. Im not sure why, but its definitely a trend, so thats interesting that they would want to go the other direction.
Click to expand...

HRT still opts for 3rd rail way more often than overhead. You're thinking more of LRT being stretched into quasi-HRT overlap, like Los Angeles where some of their sealed-corridor high-floor LRT buildouts are "HRT in everything but name" and are only still called LRT because they happen to recycle the same rolling stock as some of their other non-sealed/mixed-running lines. At extremely high frequencies third rail is many times more durable to Trains Per Hour punishment than overhead wire, and still the overwhelming choice for urban metro systems. You don't have to expend anywhere near as much regular overnight maint-shift labor inspecting for worn third rail as they regularly have to do in Green's Central Subway or Blue's Airport-Wonderland overhead with the wire car track critters after several days worth of service.

The original reason for doing overhead on Blue's Revere extension was that the 1940's planners had concerns about ice buildup on the third rail during Nor'easters. There were comparably few ocean-hugging/stormy-climate HRT analogues to compare against back then, so they hedged their bets on overhead which had more reference cases for successful ice-busting back in that day. In the last 70 years third-rail heater technology has come a long way, and there have been many more third-rail systems built in extreme weather conditions (NYCT's 1958-opened Rockaway Line being a model proof-of-concept for our winter weather patterns). So third-rail icing is no longer any ops/maint concern. Blue's overhead also takes it on the chin regularly in storms via wind damage in spite of its generally fail-safe rep around icing conditions, so the T isn't getting optimal maint bang-for-buck on the above-ground portion to begin with. If they had to do it over again knowing what they know now, they would've picked third rail all the way. Icing wasn't the risk they thought it would be, but the wind...blows.


The Blue Line Transformation study *does* have a significant "do it over again" component because one of its primary study tasks is fortifying Blue from climate change and sea-level rise. Meaning, relocating all of the electrical feeder plant out of old flood-prone conduits and putting it somewhere it'll stay dry in a major inundation. So every signal and electrical cable on the whole works is going to get relocated somewhere it can stay water-tight in an inundation, and the signal system modernization part of the project will massively consolidate the field hardware to lower its vulnerability. Despite the contact wire being overhead, miles and miles of trunk feeders are all down low and will be replaced. All of that getting replaced any which way lowers the cost threshold for going the extra mile to change the whole thing to third rail in tandem. As long as the feeders are water-tight and the circuit-breakers set up to allow for quicker power restarts after a track-level flood necessitates cutting the power in the first place, third rail can literally be submerged in ocean water for weeks and live to tell about it. Just run a "rust-buster" track critter with faux third-rail shoes over it a few times before powering it back up and it's good as new, as LIRR/MNRR, PATH, and NYCT all found out after Hurricane Sandy (Sandy, of course, bullseyeing feeder conduits as the major concern for fortification). A substantial chunk of the whole system gets replaced any which way, so BLT's thinking is "Why not do the contact system right this time at not much extra premium?" So long as the feeders are water-tight (and indeed, they can probably just keep sawed-off 6 ft. stumps of the old cat poles around for mounting the feeder plant above 50-year flood stage if they want), it works just fine. The extra benefits are that it zeroes-out the wind demerits that currently make the overhead maintenance a P.I.T.A. in storms, simplifies car maint costs somewhat to retire the pantographs, and zeroes-out one type of recurring Blue service disruption where the power switch @ Maverick/Airport doesn't work right on the first try (usually a pantograph that fails to raise/lower correctly).

BLT has many months left to go before it releases its report recs to the FCMB on how to proceed, but given that nearly every above-ground trunk cable--signal and electrical--is going to be wholesale replaced in some form or another for climate-change fortifications changing the contact service isn't a massive extra step. Their findings just need to refine how much of an extra step it is cost-wise before they lean into the general consensus that it's time to do this.
S

Thanks. Two of the hrt systems I was thinking of are crossrail and the sydney metro, but I guess those are closer to regional rail/commuter than hrt transit. Makes sense. Appreciate the detailed responses.
F

Here's the last Blue Line Update slides to the FCMB, from January. Answers some questions posed over the last page.

Glad to hear this project is finally moving forward. Looks like $13 Million in funding for design/engineering for next year. Good to also hear they decided to go with a Cut & Cover Tunnel. While it will be a pain to excavate a huge hole in the middle of Cambridge Street, its the right way to do it. Its a waste to use a TBM on something this short. I also like the fact they are talking about possible "early action" work before the larger project. Meaning we could see utility relocations before the project even begins. All in all, a nice long awaited project.
R

Between this and the GLX, that is two projects that could have been done years ago if the management hadn’t spent so much time trying to weasel out of them.

Equilibria said:
Blowing up the renders. Worth noting that the unconstrained CIP slides list RBX at $850M as a part of the capital spending series.

These renders are beautiful. In the past 18 years this city has seen plenty of drastic change as far as development is concerned (more than a lot of other cities in this country) - but our rail transportation has been timid, unimaginative and mediocre - especially for a market that has a great deal amount of rail usage for our size.

Renders like these make you imagine what COULD be. NSRL. Orange to Reading, Blue to Salem, Ashmont/Mattapan converted to Red, Orange to West Roxbury, LRT or HRT to Seaport and Southie. On and on.

As for this project itself - the renders hit the right note. It’s nice, not overdone. Would be thrilled to see this get done sooner rather than later.

You also wonder what could happen with even this project if there was even a mediocre amount of funding available. An extension to Kenmore is roughly 1.9 miles. That’s roughly $1.5B

What’s alongside and above the Blue Line State Street curve? Will they have to mine sideways or can they cut and cover a new alignment?
R

Arlington said:
What’s alongside and above the Blue Line State Street curve? Will they have to mine sideways or can they cut and cover a new alignment?
Click to expand...

I looked at Google maps to try to get an idea what could be there and was surprised to see how awful Google's alignment of the tunnels is in downtown Boston.
I don't expect them to be perfect but they show the Orange and Blue crossing at Water and Devonshire St. Looks like they didn't put much effort in to make it even close.
F

Arlington said:
What’s alongside and above the Blue Line State Street curve? Will they have to mine sideways or can they cut and cover a new alignment?
Click to expand...

Dunno. That's why they need to study it. It's 1901 tunnel so the under-street utility layer isn't immaculately mapped here, and thus is a potentially wide cost variable.

Some renders from the 2006-2011 renovation showing the curve: 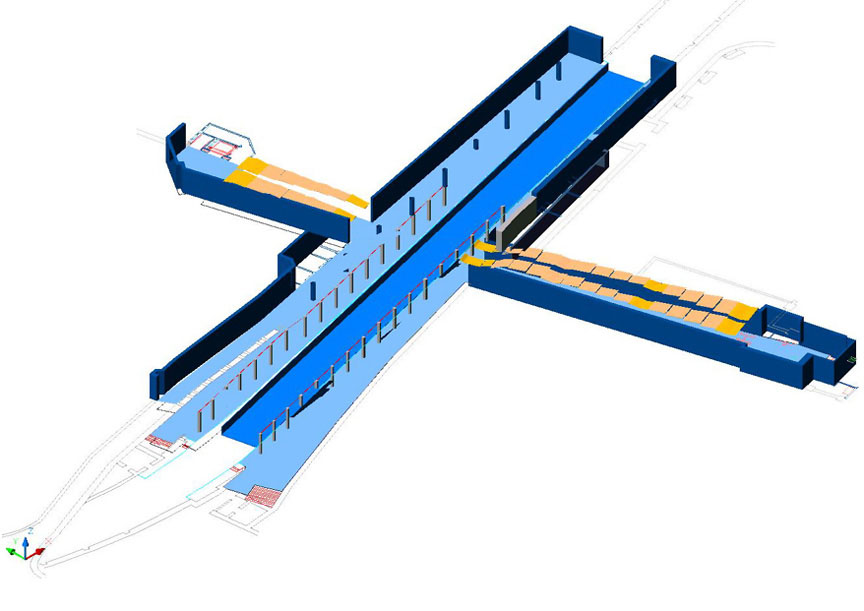 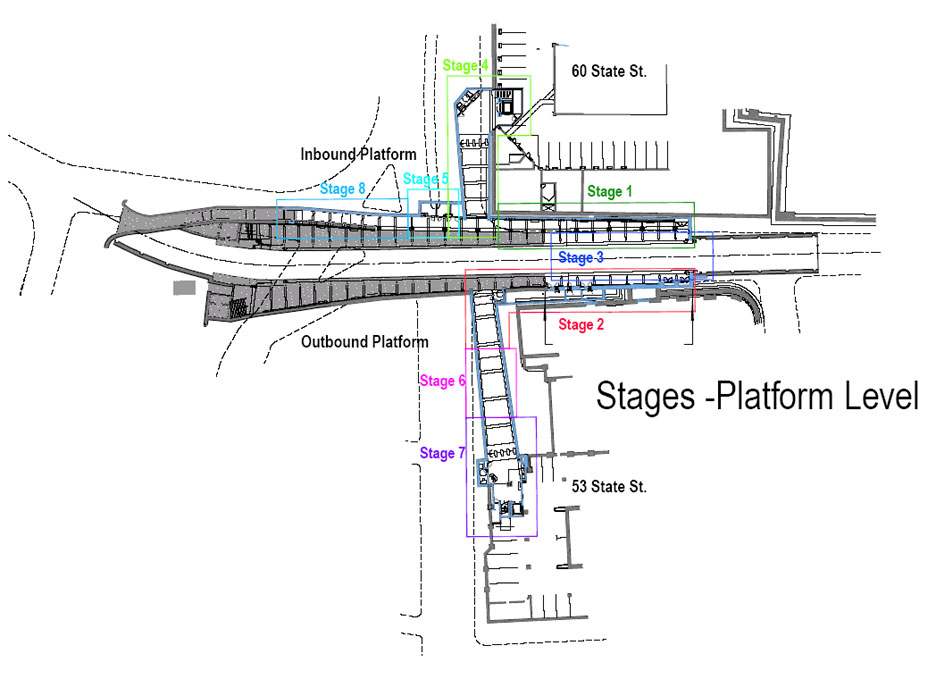 It's not a bad curve radius-wise, but the fact that it hooks right at the lip of the platform means longer cars would smack the platform edge while still turning on their axles.
R

Seems like the platform could be shifted towards Aquarium, to give the curve some room.
F

RandomWalk said:
Seems like the platform could be shifted towards Aquarium, to give the curve some room.
Click to expand...

That's likelier to be the solution than modding the curve. If you gave all/nearly-all of the car enough space to even out off the curve before coming into the platform the cars could potentially be a lot longer. Still needs a study because the Aquarium side is similarly "Thar be dragons" at what tunnel mods could stir up under-street. It's not a megaproject by any measure, but the unquantified variable cost is large until they study enough to constrain it.
R

Here is a picture courtesy of historicnewengand.org from 1902 construction existing utilities at #78 State St I can personally guarantee it's not better now. 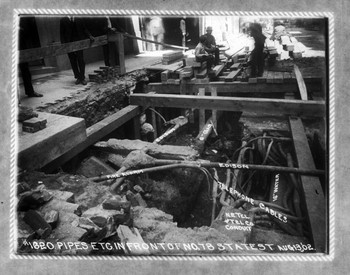