I figure that they might each deserve their own thread (they're bigger, dollar-wise, than the Green Line Extension), but they'll unfold slow-enough and simultaneously enough that they seem to go together.

BLT (Blue Line Transformation) is not a declared thing as something of an accident of history: Blue Line completed its platform extensions and fleet renewal "early" and the only transformative project now is the extension to MGH (and elimination of the Bowdoin Loop). See "MBTA Red Line / Blue Line connector" thread

The Green Red Orange Transformations share a common theme and purpose: Capital Projects that increase capacity on the core lines through:

Orange Line Transformation is:
The following projects are now complete:

Also, I'm expecting to discuss the vehicles as part of the existing vehicle-procurement threads:
New Red and Orange Line Cars

The day has come! Red and Orange lines to get new cars: http://www.bostonglobe.com/metro/2013/10/21/patrick-announce-plans-purchase-cars-overhaul-allston-section/ObU1TPS7Dnk7QNfnjrYqIJ/story.html Governor Deval Patrick will make good on his promise to use new state transportation funding to buy...
archboston.com

Good point.
For the Bus (including the "better bus stuff" and Bus Transformation we haveL
MBTA Bus & BRT

RLT promises capacity for 65,000 additional daily riders, which is about a 25% increase over ridership that bounces around 270,000.

I'm cloning a Datadyne post here because it is the definitive "how will Green Line Transformation happen?" presentation:


datadyne007 said:
So here's the Type 10 presentation from the 5/7/18 FMCB that everyone is talking about:
https://cdn.mbta.com/sites/default/...formation-program-construction-management.pdf 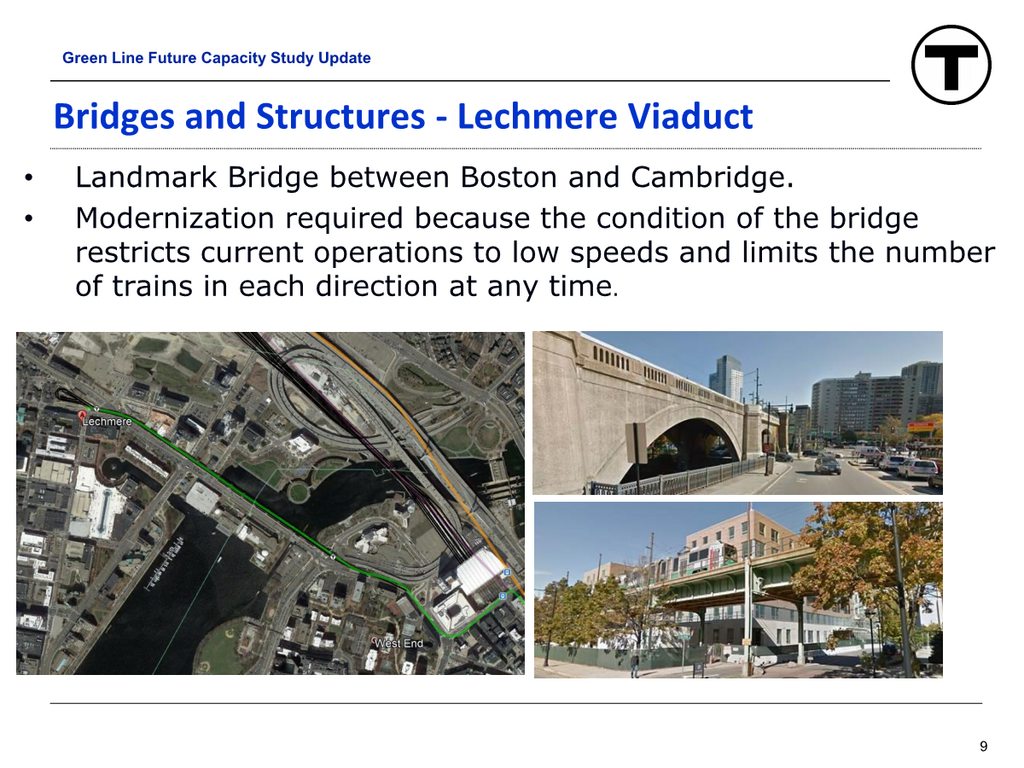 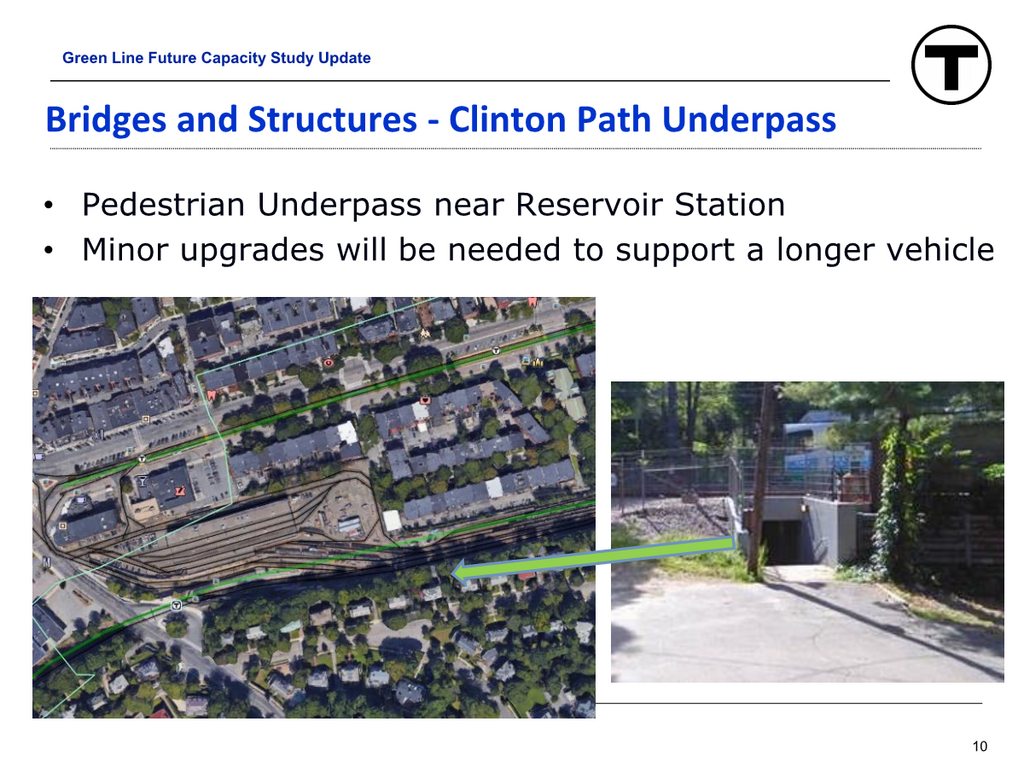 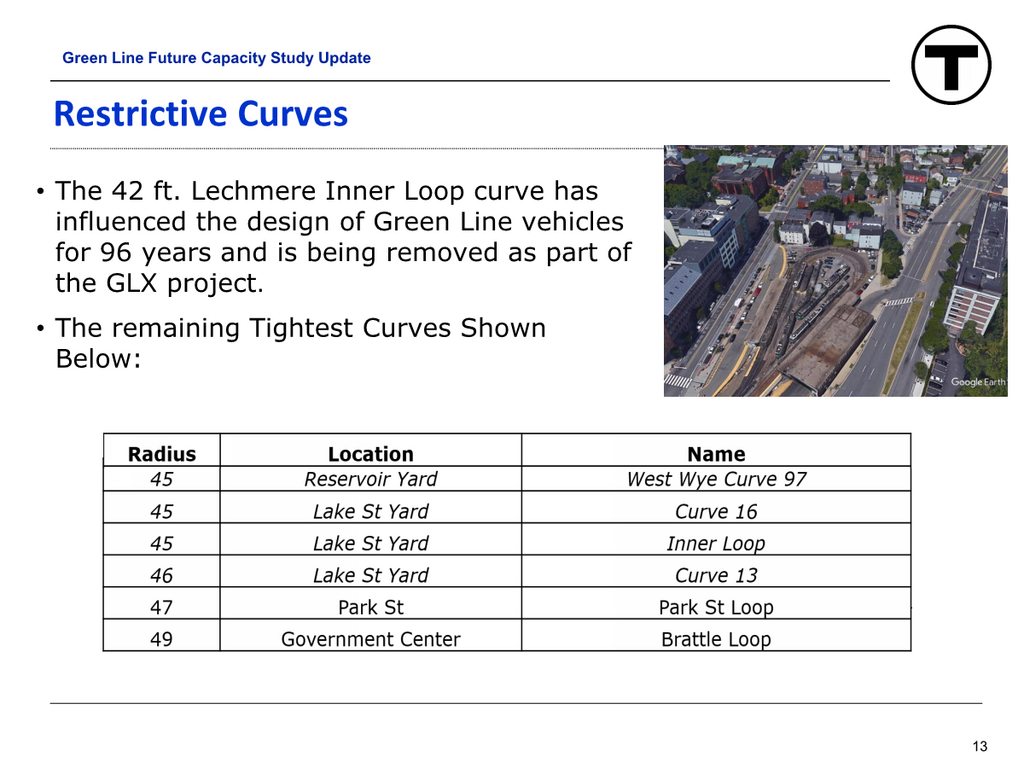 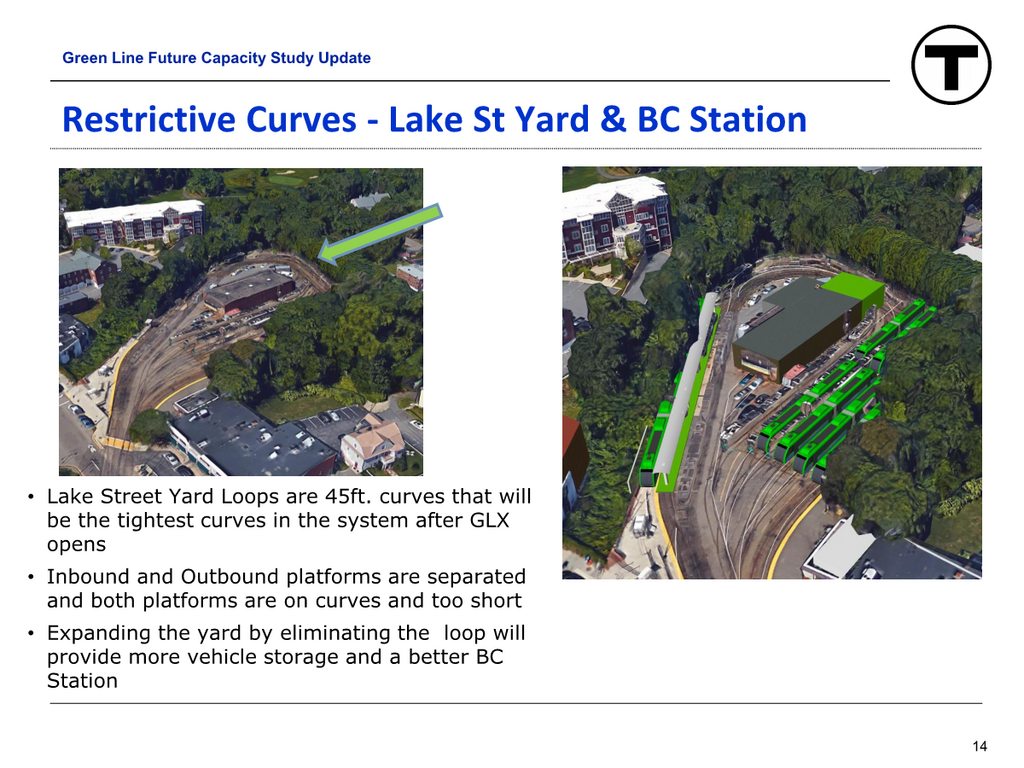 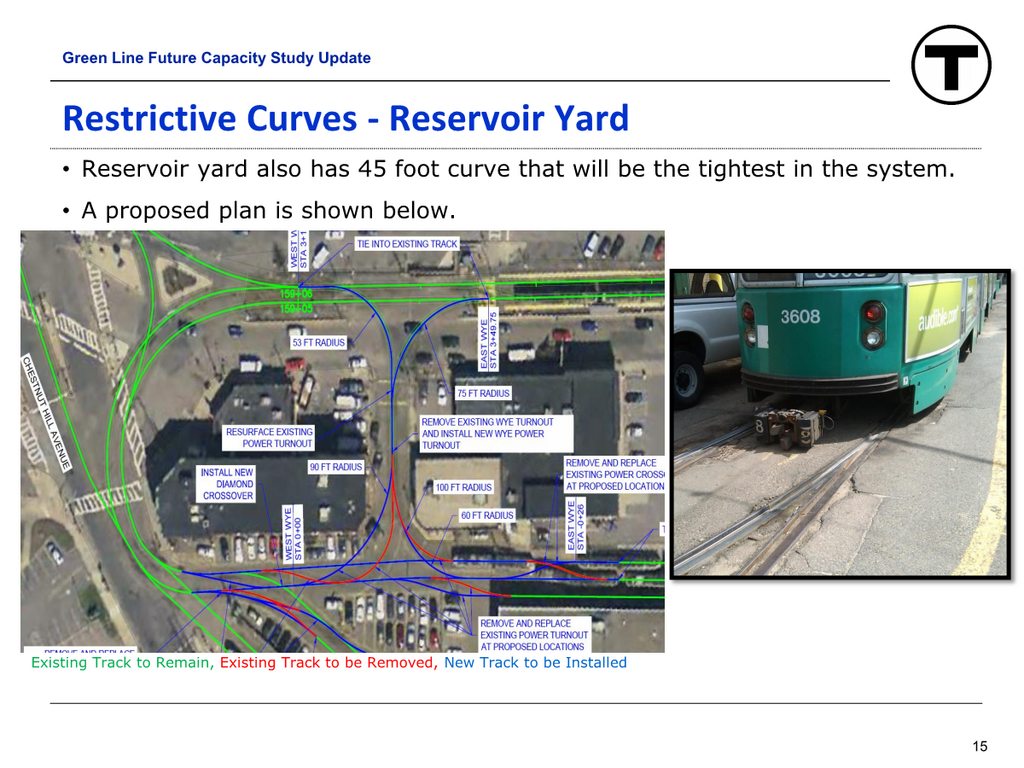 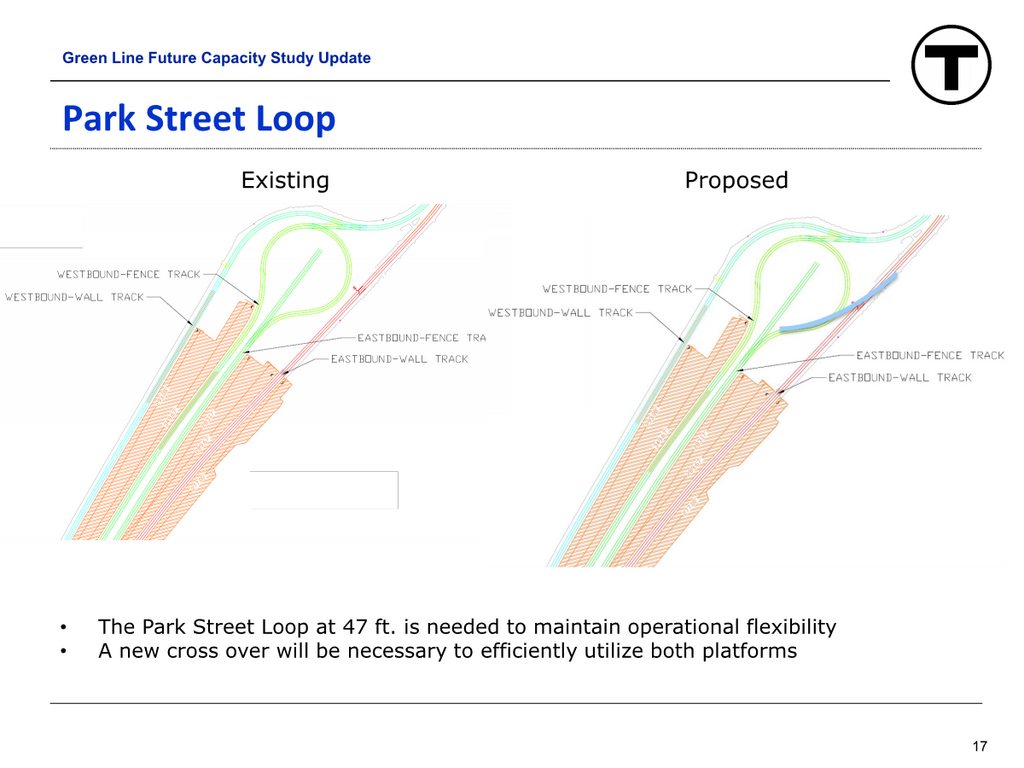 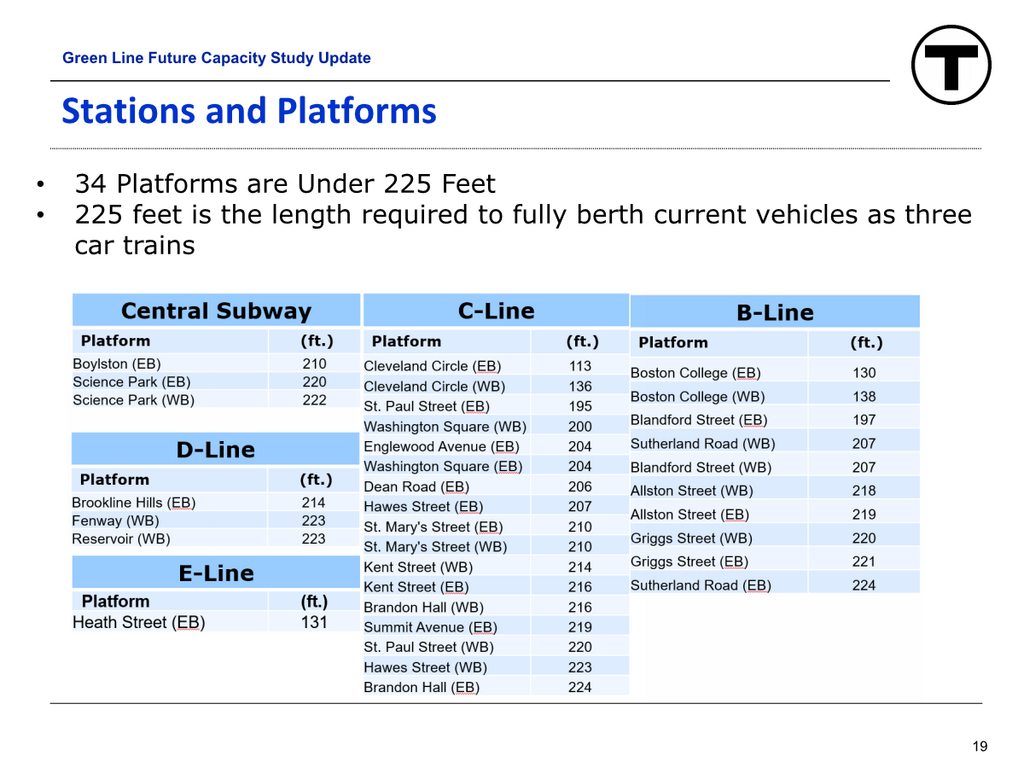 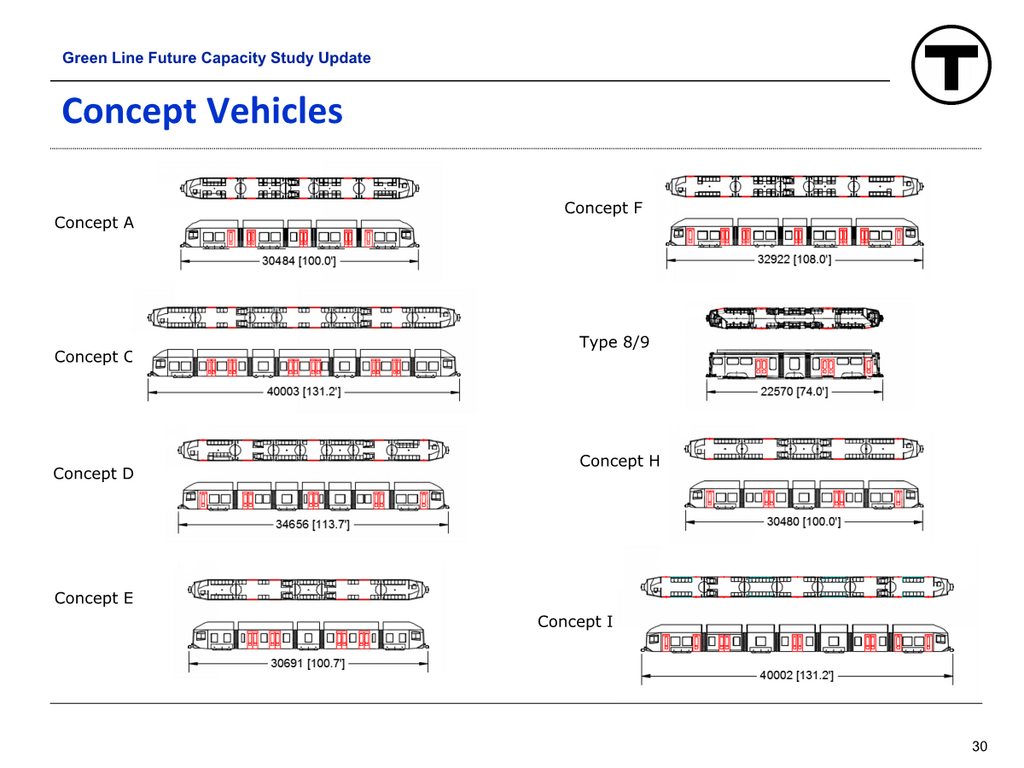 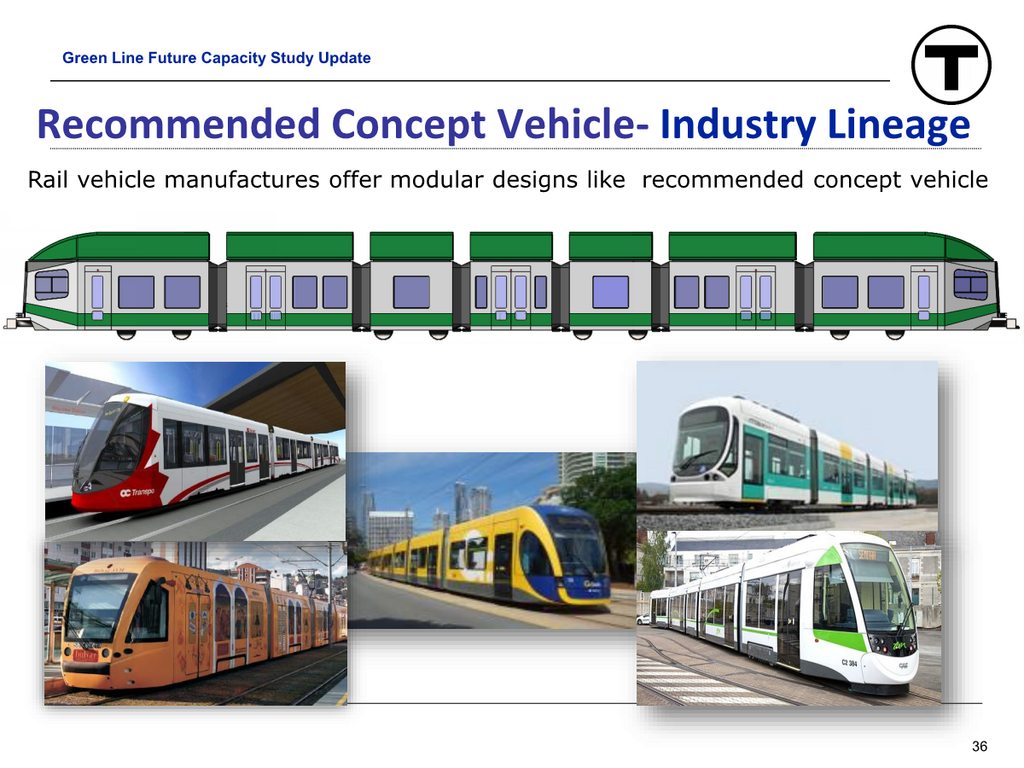 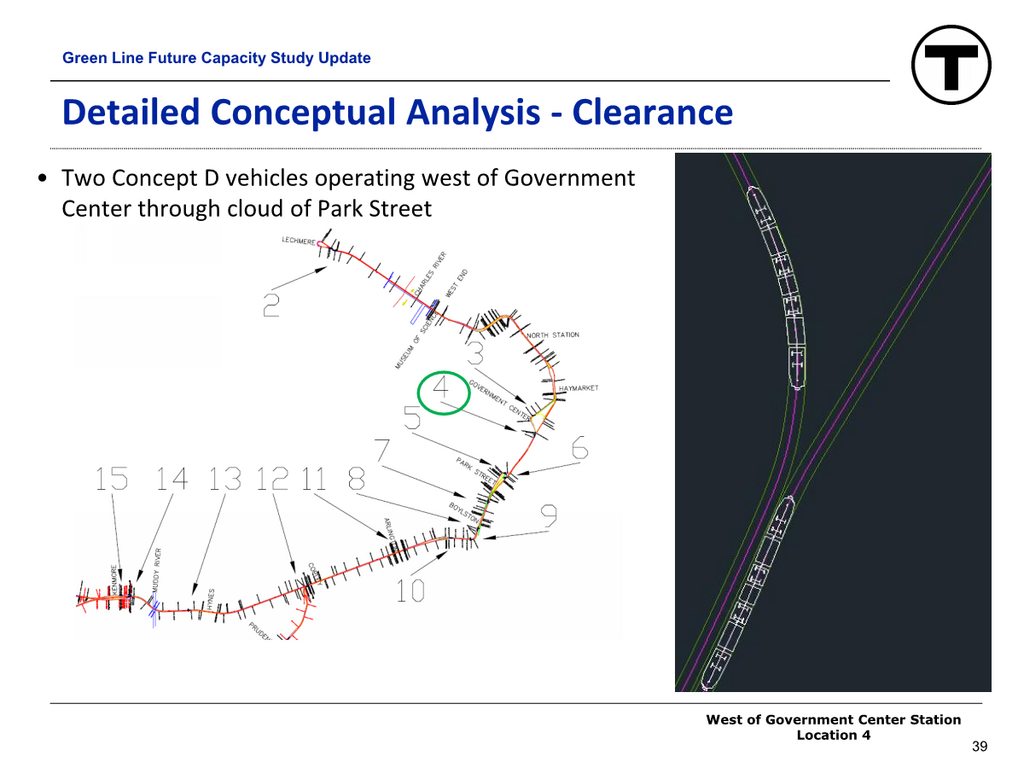 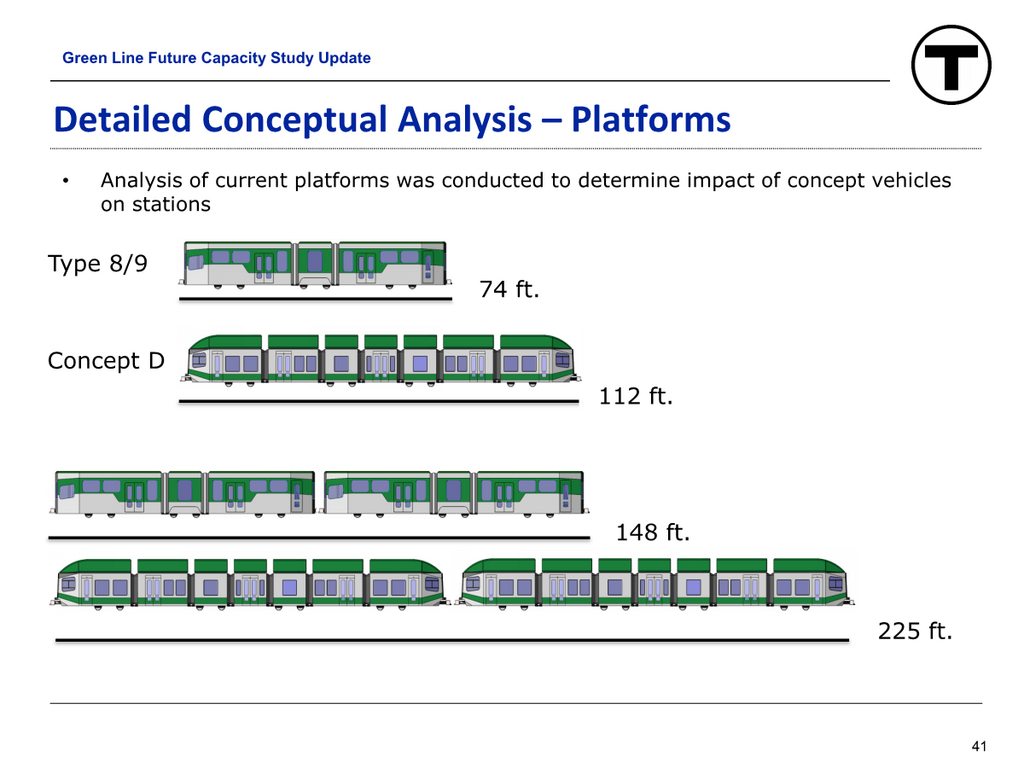 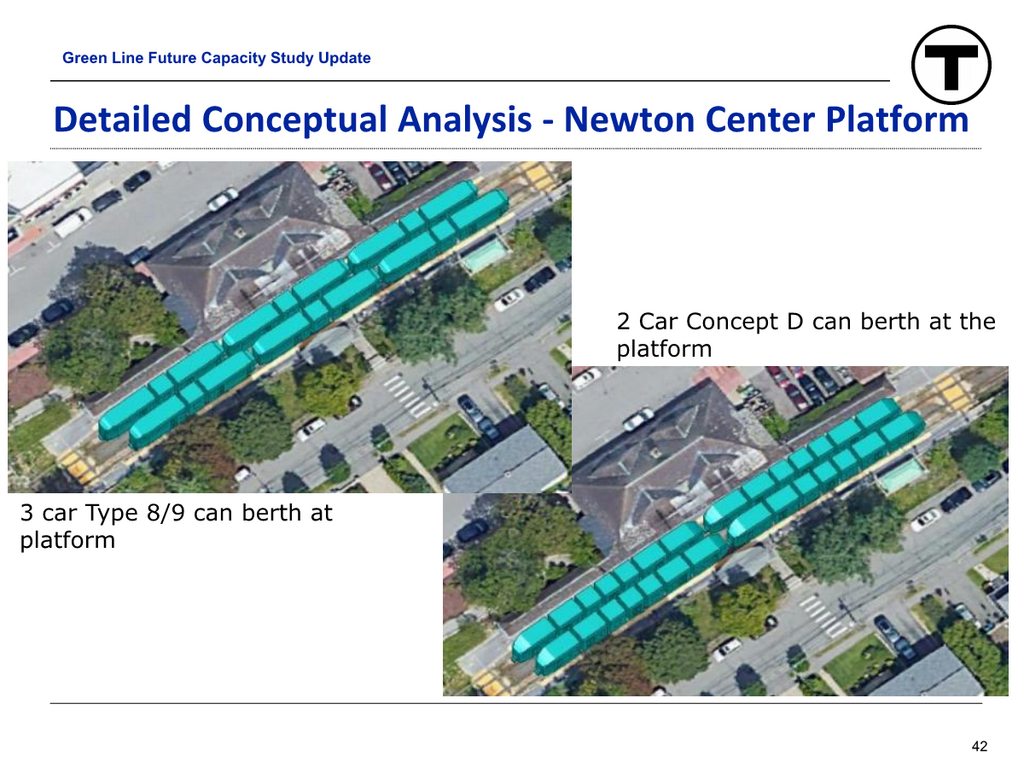 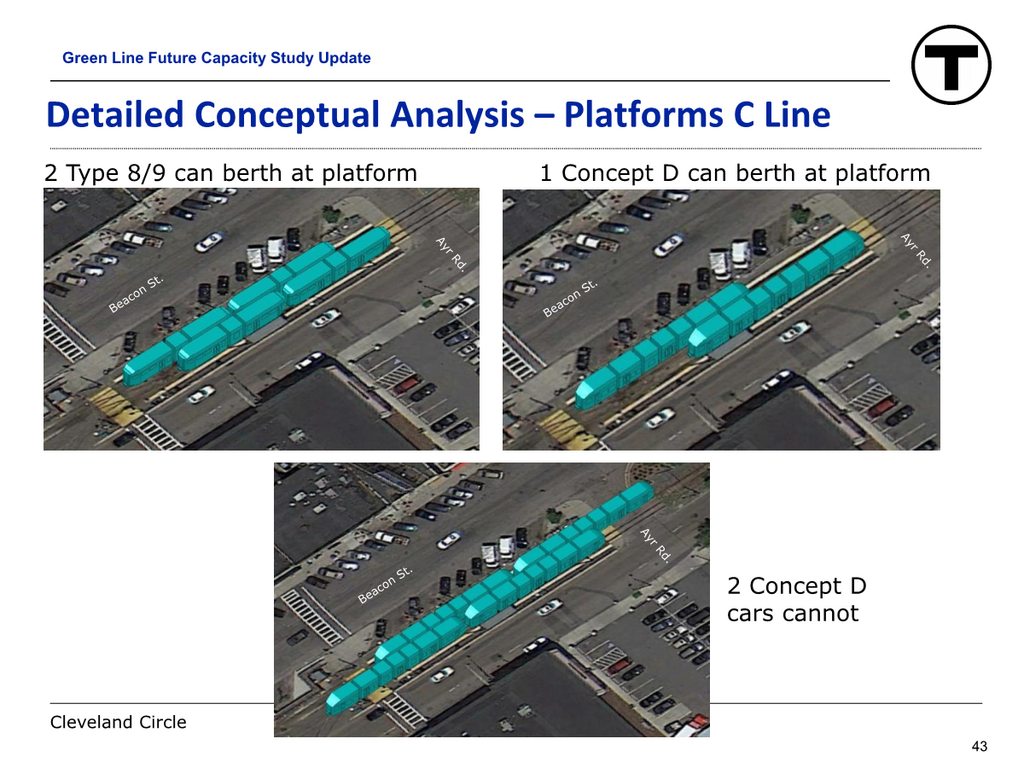 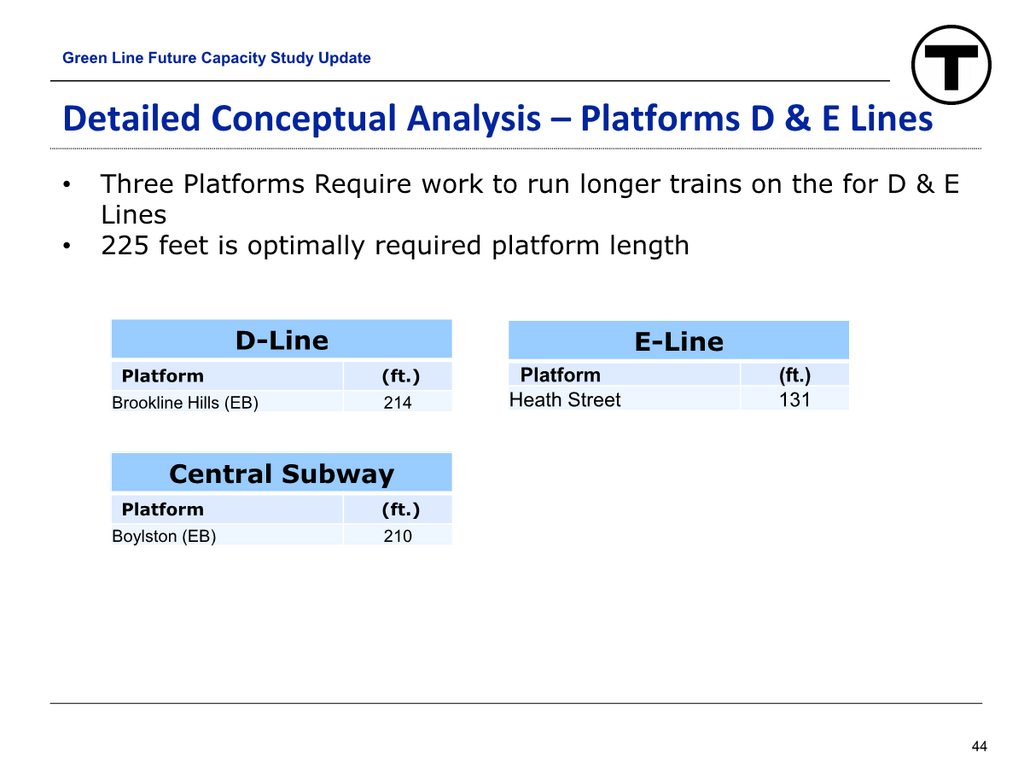 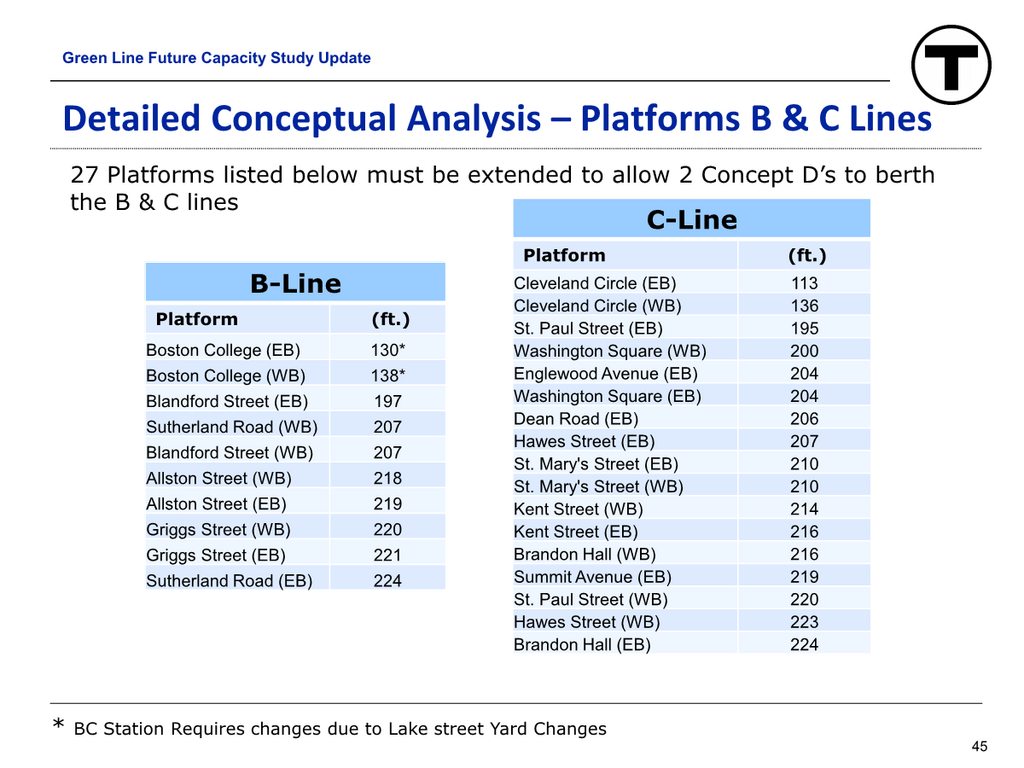 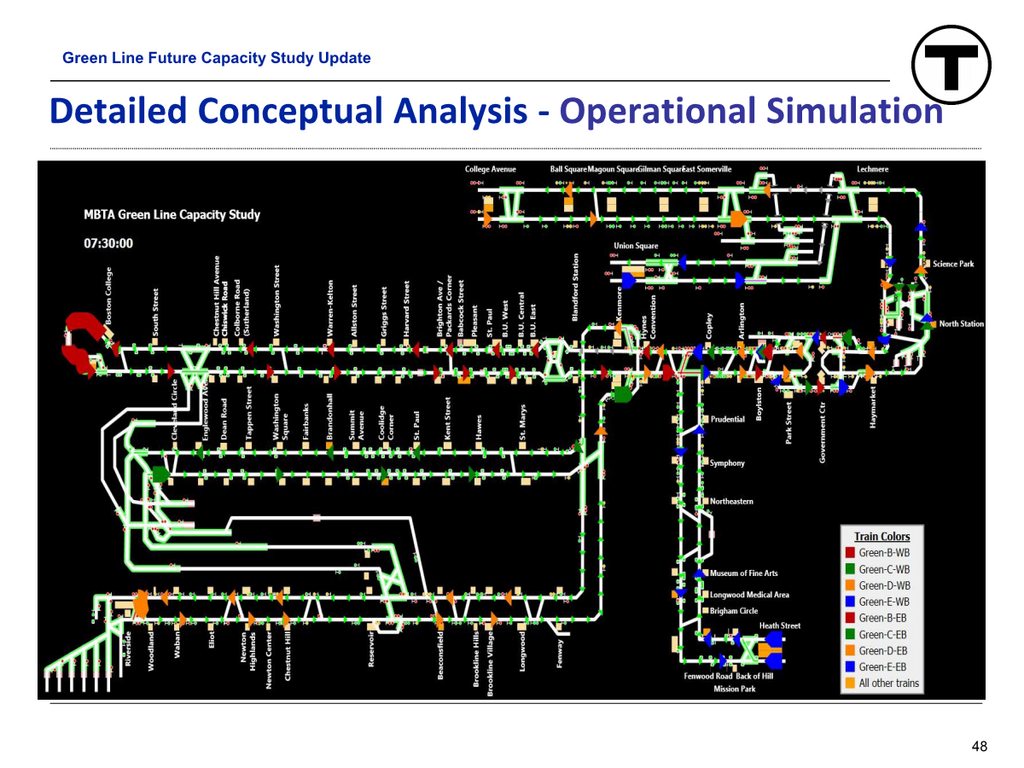 Here's one I don't get: Why they need to keep the Park Street loop as is? Why not make it a 49 footer (matching Brattle Loop at Gov Center) by putting "short turns" onto the *outside* (leftmost) track instead of trying to put it on the inside? Gentle loops are quieter and less likely to cause derailment. (Is there an "industry standard" difference worth accommodating, at, say 48 ft?) Also the ability to send trains from the inside track on the inbound platform is long overdue. As it is, you can't unload 2 inbound trains at Park unless you're willing to turn one and send it back out.

Too many support beams to move to modify Park Loop. It's within tolerance for most modern LRV's, so a matter of not making a mess where a mess doesn't need to be made. The thru-service crossover is the big gain for being able to wave Lechmere trains ahead of GC-turning trains en route to GC. That's a huge one for congestion management.
R

Big +1 for the consolidated thread (with links to other threads as relevant). Great information here!

Didn't know the D line closes earlier than the rest of the lines. 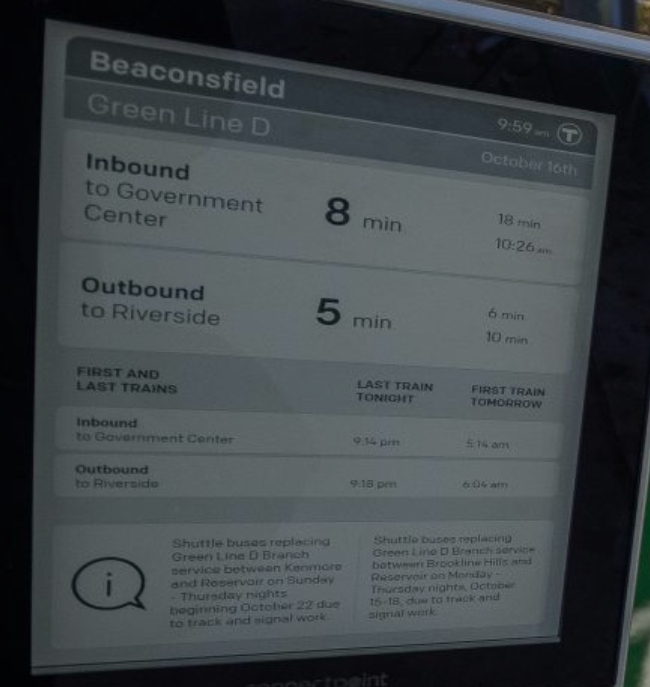 Regarding the Park St loop, has anyone (MBTA or otherwise) explored how catastrophic it would be to just get rid of the loop entirely and just redirect trains after GC? That loop seems to be a lot bigger on maps and isn't so much father away that I could see the extra few minutes impacting quality of service.

Park Street loop can, and should, go. It's by far the worst curve on revenue trackage. GLX will vastly reduce the number of trains that need to turn in the downtown core - especially if the Medford Branch exceeds projections before the Type 10s arrive, in which case the C will need to be through-run as well.

The EGE said:
Park Street loop can, and should, go. It's by far the worst curve on revenue trackage. GLX will vastly reduce the number of trains that need to turn in the downtown core - especially if the Medford Branch exceeds projections before the Type 10s arrive, in which case the C will need to be through-run as well.
Click to expand...

If the Type 10s can be off-shelf while keeping it, why decommission it?

The short answer: they can't. Standard radius for off-the-shelf vehicles is 82 feet (25 meters), with some models at 66 feet (20 meters) or 59 feet (18 meters). Anything below that (especially in/near revenue service - fully non-revenue yard areas can sometimes have smaller radii at highly restricted speeds) is a custom model. Park Street loop is the only difficult and frequently-used curve to get to that 59-foot radius; everything else is either going away (Lechmere), rarely used (Kenmore Loop, Brattle Loop), easy to fix (Heath Street, Cleveland Circle, the BC yard loops by moving the platform to the median), or deep in Riverside or Reservoir yards.
F

The inner crossover installation at Park is worth enough congestion mitigation to allow B's to return to using GC loop full-time, so Park will again return to being without a regular revenue service pattern. That'll help, but even all those years things weren't regularly turning at Park the loop was still needed on daily as-needed basis as a bail-out for delays before they cascaded too thoroughly to GC. That's the dilemma they'd face in getting rid of it. It's a lot easier during a delay recovery sequence to yank stuff as-directed at Park while it's still on the 4-track portion instead of gambling on too many past-GC trains that need the far-end platform berth getting stuck behind turning GC trains that need the inner platform berth. The inbound thru-service crossover at Park should greatly improve this situation as regular practice will now put all past-GC trains on one track (probably the current thru track) and all turning trains on the fence track with prioritized signaling giving past-GC trains chance to jump ahead of the turning train and hit their far-end platform spot without having to wait. It'll mean, besides B's being able to turn at GC again instead of Park, that the turning trains may have to frequently wait a few seconds longer for schedule adjustment before leaving Park so the next thru train can queue-jump. But it'll also mean there'll be less schedule adjustments writ-large on the Central Subway because the Park-GC segment will be able to handle so much more throughput with so much better congestion mitigation options...thus making those schedule adjustments less frequent and irritating overall.

The question is: is that enough unto itself to retire Park Loop? As big an improvement and as better the resilience that crossover affords, it's not going to completely zero-out the need to throttle turning traffic in a delay recovery scenario. So they do have a viable point that retaining Park Loop is vital for operational flexibility, even without the brittleness of before and without any daily service pattern utilizing it. The only debate is whether retaining a 47 ft. radius loop as revenue track hoses the off-shelf buying options to a degree that clobbers what they end up paying in unit price for the new fleet. Custom dimensions are not necessarily evil if they can be done as adaptation to an off-shelf model, staying fully in their lane at leveraging a generic supply chain. It's different if the whole ground-up design has to be unique-to-Boston and you start having to do things like custom trucks yet again. The GLT task force hasn't spelled out yet exactly where that threshold is between light customization of a generic design and divergently-custom design re: these borderline-radius curves. We don't have specific enough info to make that call to toss Park Loop at any cost, or keep at all (reasonable) cost because the bail-out option is still needed for delay recovery or some future expansion branch pattern might end up needing to use it as a regular turnback. And Brattle Loop too is going to be a tricky one because of the near certainty that GLX-Medford is going to need some part-time rush hour short-turning augmentation there at the kind of ridership its likely to generate, as well as any Urban Ring LRT hook-ins from Lechmere likely needing to use that loop as a permanent all-day turnback. Curve tolerances vs. buying options and where the cost-escalator thresholds are are one of the things they're going to have to spell out in more detail in future FCMB presentations.
Last edited: Jan 2, 2020

Asking a probably stupid question - is there no way to install a switchover between Park and Boylston to allow the train to simply reverse direction at Park? The T only uses 1 of 2 Lechmere-bound platforms as it is (and the one they don't use is currently dedicated to the loop) so having the train wait long enough for the driver to run to the other end seems plausible...